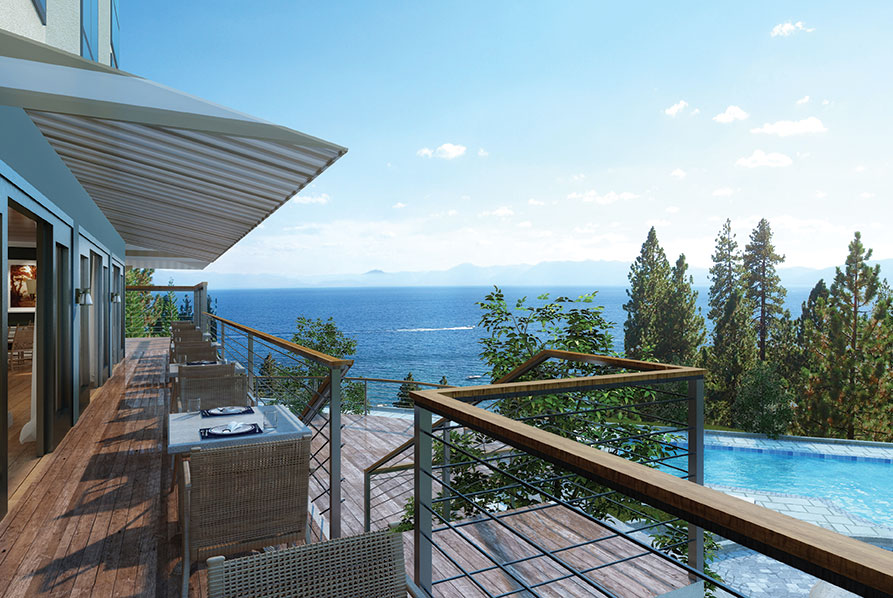 The Renaissance of Crystal Bay

in Around Town | Summer 2015 | Written by Matthew Renda

Following the proliferation of Native American casinos throughout California beginning in the late 1990s, Lake Tahoe’s casinos—the once-vibrant hub of a celebrity universe that witnessed a confluence of actors, crooners, gangsters and politicians consorting with cocktails in the shadow of the spinning roulette wheel—lost their allure.

As the calendar turned to the 2000s, the famed Cal Neva, the oldest licensed gambling establishment in the United States, once owned by Frank Sinatra and frequented by President John F. Kennedy, had fallen on hard times. And it showed.

Its neighbor, the Tahoe Biltmore, just steps across Highway 28, was similarly outdated as its large casino floor space lost appeal as a tourist magnet.

Contemporary Tahoe tourists are less interested in gaming and more interested in being outside in the scenic Lake Tahoe Basin, says Sandy Evans Hall, executive director of the North Lake Tahoe Resort Association.

“Gaming is a nice amenity, but the primary reason, the greatest reason guests are coming here is for outdoor recreation,” she says.

Now, both North Shore projects are on the cusp of completing major overhauls that figure to rejuvenate Crystal Bay by transforming it from a place where people go to gamble away their nights to a place where they go to hike and bike away their days.

“It’s a renaissance,” says Diane Moresi with the Incline Village/Crystal Bay Visitors Bureau. “With two new hotels offering a plethora of things to do, we’ll have something we can actually be proud of.”

Cal Neva was shut down for comprehensive renovations in September 2013 by Criswell-Radovan LLC, a Napa, California-based development company that purchased the property in the spring of that year.

The 10-story, 191-unit hotel straddling the California-Nevada border has sorely needed an update for several years, says Robert Radovan, co-owner of the property.

“So many people have been sending cards, calling, sending emails thanking us for redoing the Cal Neva,” Radovan says. “A lot of people have been driving by that property for 30 years wondering why no one has done anything.”

The comprehensive renovation, which will reportedly cost approximately $49 million, has proceeded fitfully, with repeated postponements of the opening date; however, as of late momentum is carrying the development quickly forward to the slated December 2015 opening ceremony.

As the project progresses, it continues to focus on upgrading the rooms to a more luxurious, contemporary experience, Radovan says. It is the same with the five historic chalets, the three restaurants, the restoration of the resort’s theater (originally installed by Sinatra) and more subtle upgrades to the historic Indian Room and Circle Bar.

“The design team absolutely nailed it,” Radovan says, asserting the design will incorporate elements of classic mountain resorts with modern amenities and fresh design elements. “We want to keep what is historical, pay homage to it, but not be slavish. It’s not a shrine.”

Yet Radovan knows the history of the Cal Neva—particularly its halcyon days in the early 1960s when Sinatra owned the place and hosted other members of the Rat Pack, Marilyn Monroe, Joe DiMaggio and a veritable who’s who of the times—is important to Tahoe residents and prospective customers.

In recognition, Radovan met with members of the Sinatra family—including Nancy, Tina and Frank Jr.—in Los Angeles recently with the intent of discussing memorabilia licensing, but the conversation quickly turned to the project’s overhaul. As a result, the family agreed to invest in the property and provide input on the overhaul.

“It’s been one of the most fun projects I’ve ever worked on,” Radovan says.

The project is scheduled to open in coincidence with Sinatra’s 100th birthday in December. Everything is on time and on budget, say Radovan and others associated with the project, but the developers are being coy with the exact plans for an opening ceremony, saying those in Lake Tahoe will have to stay tuned.

“We are planning a great event, but I just can’t announce it yet,” Radovan says.

In the meantime, interested parties can rest assured the renovation will incorporate the enhancement of the property’s connection with its natural surroundings, with a focus on utilizing the views of Lake Tahoe that the prospect of the property affords, Radovan says.

“The rooms are spectacular,” Radovan says. “Where they used to have small windows that looked out to The Lake, now they will feature floor-to-ceiling windows. Every room we have has a spectacular view.”

Also, the resort will feature a larger area for outdoor activities, all intended to downplay the casino and emphasize the outdoor lifestyle.

“We want to change to a lifestyle destination,” Radovan says. “You can’t have a successful casino without having a successful resort. You see that in what Boulder Bay is doing. That is an exciting project moving forward. The whole area is getting cleaned up.”

Developers of Boulder Bay, the name of the renovation project that seeks to refashion the Tahoe Biltmore, announced in March they have secured the financing necessary to move forward. 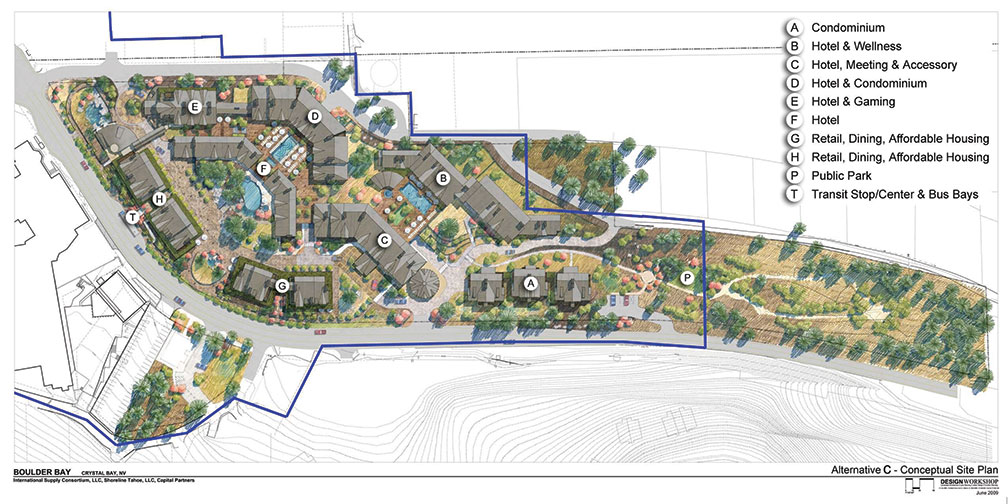 A rendering of the planned Boulder Bay development

The once-controversial renovation project—located directly across the street from Cal Neva—was approved by the Tahoe Regional Planning Agency in 2011, but has since languished, while the owners perform just enough work to keep its operating permit active while hunting for financing.

In March, Roger Wittenberg and daughter Heather Bacon, who are in charge of the redevelopment project, secured the deal they were looking for by agreeing to terms with an undisclosed private equity firm.

“We are excited to be able to move forward,” says Wittenberg. “We feel like a lot of people in the community are excited with us.”

The timing of the deal was critical, as Boulder Bay was approximately two months away from defaulting on nearly $500,000 in property taxes, according to Washoe County representatives. The default would have triggered a county seizure and subsequent auction of the property.

Instead, those worries are in the distant past as Biltmore joins Cal Neva in a redesign marginalizing the gambling-centric format of the past, and positions Boulder Bay as a health and wellness retreat affording access to Lake Tahoe’s outdoor portfolio.

“Roger was a visionary in that he was the first person to come up with the original idea to have the project focus on health and wellness, rejuvenation and relaxation,” Bacon says.

Much like Cal Neva, Boulder Bay will not entirely dispense with gaming, but it will also not play a critical role in marketing the renovated property that will feature a 20,000 square foot health and wellness center, a 10,000 square foot fitness center and other related amenities. 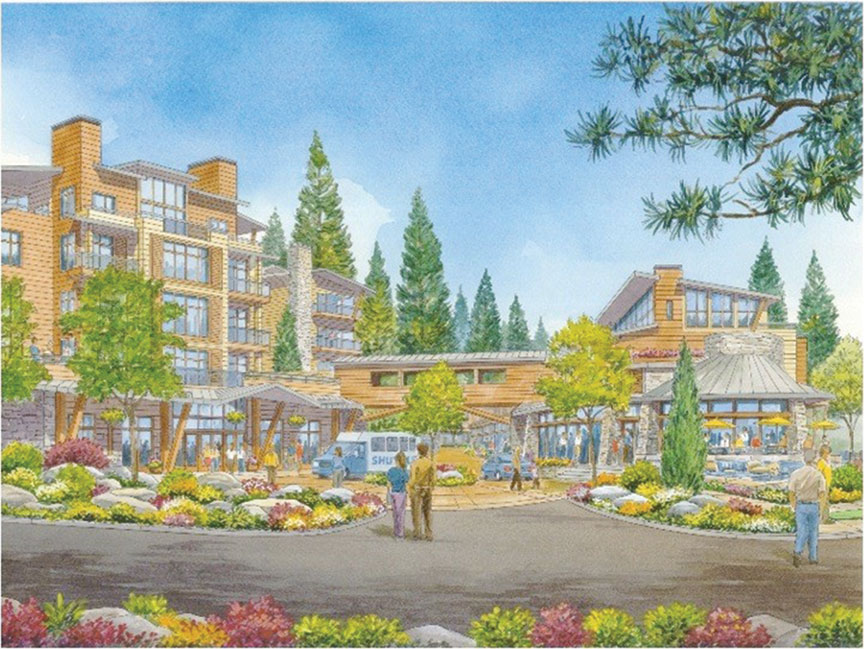 “A different kind of experience has to be created,” Wittenberg adds, saying the days where people came to Lake Tahoe explicitly to gamble were over. “People are more attracted to the natural beauty of Lake Tahoe, with its trails and opportunity to engage in hiking and biking.”

Boulder Bay will reduce the size of its casino by a third to 10,000 square feet and will construct facilities capable of housing hotel rooms and retail space.

Construction is to begin this summer.