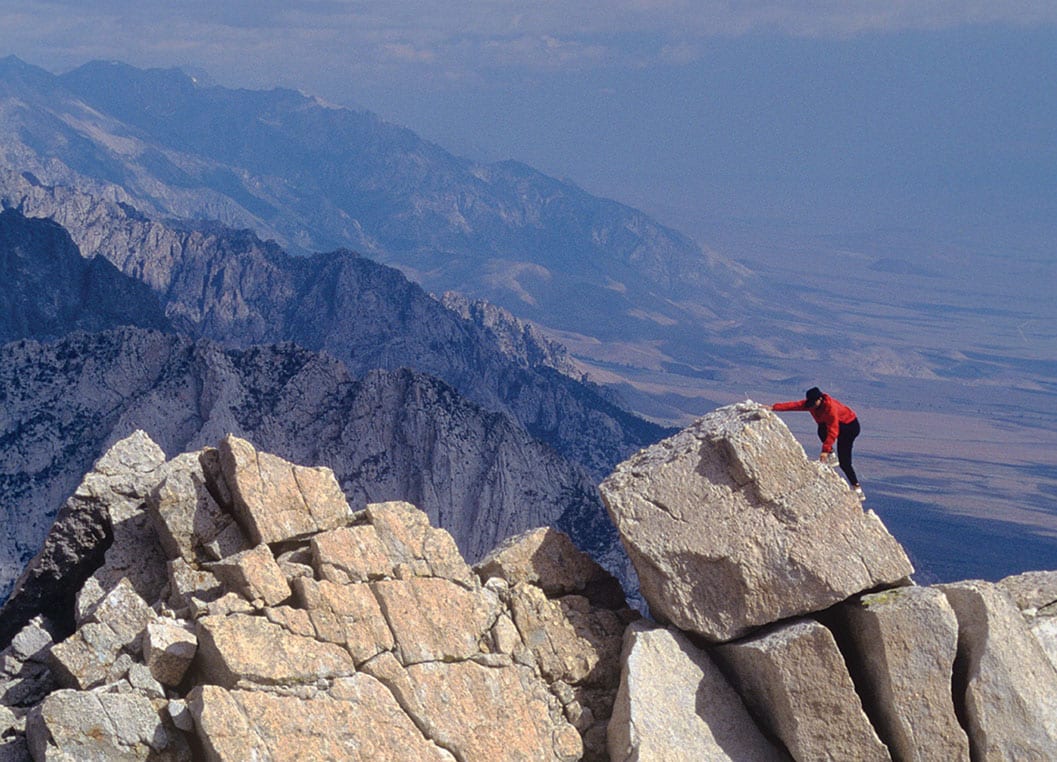 Author Brad Rassler scrambles on the north ridge of Lone Pine Peak with the Owens Valley in the background, photo by Andy Selters

Ashes into the Shadow of Arrows

“There is a Paiute proverb to the effect that no man should attempt the country east of the Sierras until he has learned to sleep in the shade of his arrows. This is a picturesque way of saying that he must be able to reduce his wants to the limit of necessity. Those who have been able to do so, and have trusted the land to repay them, have discovered that the measure is over-full. A man may not find wealth there, nor too much of food even, but he often finds himself, which is much more important.” —Mary Austin, California: The Land of the Sun

The dust of my dearly departed have been dispersed liberally, haphazardly and illegally, in no particular order, across the sandstone sea cliffs of Del Mar, California, upon the Mt. Rose trail overlooking Lake Tahoe, into the Pacific Ocean, within the ninth hole of a public golf course in San Bernardino, and across a particularly fine trout run on Michigan’s Au Sable River. All but the last were determined post mortem, a best guess at the landscape that would be most pleasing as a final place of repose, or at least temporary roost before the wind and rain kicked in.

I refuse to leave anything to chance when it comes to my Elysian Fields. That’s why I acquaint myself with each new generation of Sierra mountaineers whom I’ll call upon one day to tote small canisters of my atomized corpus to the heights. When the sun crests the Inyos, the Whites, the Glass, the Virginia Range, and bathes the Range of Light in alpenglow, they will face east and toss me aloft, variously, from the Palisade Crest, from Bear Creek Spire, from Red Mountain, from the Dana Plateau and from the summit of Mt. Rose. With any luck, the prevailing southwesterlies will deposit my bits along that liminal band where the mountains meet the desert—with the slight chance that an errant gust will carry my dust up and over those eastern ranges and into the great beyond. I realize this is dark talk from someone who still hasn’t yet drawn up a will, but then, there it is.

Why this desire to be scattered along the eastern ramparts of the Sierra, into that savage vastness that Mary Austin, author of Land of Little Rain, described as “hills, rounded, blunt, burned, squeezed up out of chaos, chrome and vermilion painted, aspiring to the snow line,” rather than in the direction of the Pacific, over the gently rolling, lake-pocked western slope, beyond Berkeley’s Cheese Board and through the Golden Gate? What’s with this hat tip to aridity? And why look backwards, for goodness’ sake?

Or maybe I can. From the moment I entered the ecotone knitting the Sierra Nevada to the Great Basin, with its deep valleys, its tilted mesas, its granite on high to lahars down low, all of which were cut by sporadic streambeds pouring off the Sierra (painted green or gold depending on the season), I was simply and inescapably home.

My first ventures in the Range of Light and the subsequent move into it came from a desire to wander lost in vacant California, to steep in its abundant untamed acreage. Much later I would come to learn that access to wilderness isn’t a “nice to have;” it’s a need to have: nothing less than an elemental part of being human, “latent in the organism, in the genome and early experience,” as Paul Shepard put it in his essay and book by the same name, Nature and Madness. As a one-time Outward Bound instructor, I saw the transformative effects of the “solo,” the interregnum in the course in which students would spend a day or more alone, secluded in the wild. Many returned to the community having been slightly undone and then—yes, fundamentally renewed by the potent cocktail of silence, simplicity and wilderness.

In The Abstract Wild, philosopher and Grand Teton climbing guide Jack Turner submits that our being largely divorced from untamed nature pains us, but so subtly we’re unaware of it—until, like the onset of a toothache, we’re not. “That is the problem,” he writes. “The ‘normal’ wilderness—wilderness most people know—is a charade of areas, zones, and management plans that is driving the real wild into oblivion. We deny this, accepting semblance instead of demanding the real.” My first self-propelled forays into true wilderness sheared off the enamel and exposed the root, and after becoming aware of the toothache I dismissed the semblance—that so-called “entropy made visible,” as James Howard Kunstler described the city in The Geography of Nowhere. In contrast, the sage side of the Sierra appeared delightfully barren, and its vacancy and rawness stroked my heartstrings.

Last year I lived for 10 months in Santa Fe, New Mexico. During a time that felt like a kind of a geographical dalliance, I found myself falling for the Sangre de Cristos and the Jemez, and the monsoonal deluges that swept in every afternoon and shaved the Colorado Plateau of its dusty heat, accompanied by magical roseate light. Santa Fe nearly snagged me, but not quite. In early October I returned to Nevada, driving west through Las Vegas. As I crossed Westgard Pass, the crease between the Whites and Inyos, I glanced at the horizon, and there, floating above the plain, was the Palisade Crest, the Sierra’s most stark and continuous alpine amphitheater of 14,000-foot peaks. “Home,” I thought, as my chest and throat tingled.

“If we think of space as that which allows movement, then place is pause; each pause in movement makes it possible for location to be transformed into place,” writes the Chinese-American geographer Yi-Fu Tuan, who coined the term “topophilia” to describe reverence of place.

My tenancy in the Eastern Sierra appears to be proving a lifelong pause.

Recently, I skied into the Mount Rose Wilderness with two friends. We summited Mt. Houghton and made camp a few hundred yards from the source of Bronco Creek where meltwater slowly seeped through matted willow. The next morning we stood among the volcanic scatter and tundra on the summit of Church Peak, traversed to the old cabin on Contact Pass, and scrambled up Chocolate Peak. From that vantage we looked out upon an imbrication of biomes, basin and range, stretching east-southeast, the Pine Nuts, Sweetwaters and clear out toward the White Mountains. We sighted downrange and made out Jobs Peak, Jobs Sister and Freel anchoring the southern end of the Carson Range and turned northward to Sunflower Peak. Eventually we slipped down the fall line a thousand feet until the snow necked down through aspen. We transferred our skis from feet to hands and thrutched through a concatenation of manzanita and mahogany, until we finally forded Jones Creek to gain the summer trail. From there we booted to the home I share with my partner, Jane, situated less than a half mile from where Galena Creek grooves into the alluvium above the Truckee Meadows. That hike took us through a kind of cultural ecotone, from wild to built environment—the one most of us tenant during life. But not afterwards.

“In my case it was love at first sight,” wrote Ed Abbey in his essay The Great American Desert. “This desert, all deserts, any desert. No matter where my feet may go my heart and entrails stay behind, here on the clean, true, comfortable rock, under the black sun of God’s forsaken country. When I take on my next incarnation, my bones will remain bleaching nicely in a stone gulch under the rim of some faraway plateau, way out there in the back of beyond.”

Brad Rassler is the founding editor of Sustainable Play, an online magazine exploring the intersection of people, planet and play. Follow him on Twitter, @sustainableplay.