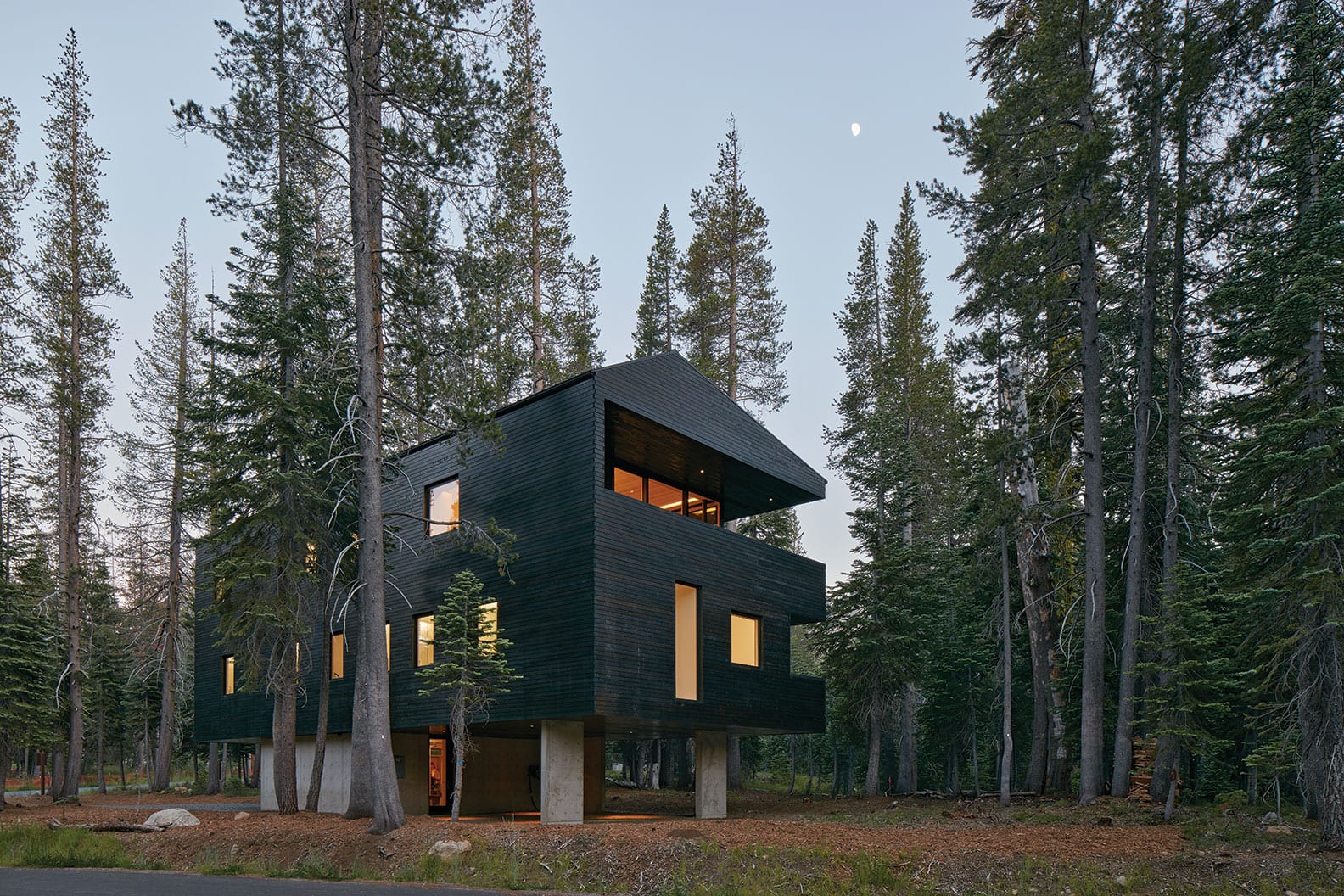 The 3,300-square-foot home at the base of Sugar Bowl Resort is lifted off the ground on concrete to protect the building from snow and minimize its footprint, photo by Bruce Damonte

The ‘Troll House’ in the Woods

In this age of dazzling mountain architecture, an increasingly common goal of designers is to create site-responsive homes that allow buildings to blend seamlessly into their natural surroundings.

Mork Ulnes Architects achieved this concept to perfection with a Donner Summit project dubbed “Trollhus,” which was completed in 2015.

Nestled among towering lodgepole pines and mossy firs, the earth-toned custom home at the base of Sugar Bowl Resort was designed specifically for the harsh alpine climate—most notably, by hoisting the structure off the ground and into the canopy of conifers.

“A lot of the houses on the summit that have ground floors, their windows are basically covered by snow most of the winter. So, we lifted the whole building up, and it kind of became a tree house at the same time by doing that,” says Casper Mork-Ulnes, the son-in-law of the homeowners and lead designer of the project, whose architecture firm has offices in San Francisco and Norway.

The idea behind Trollhus originated on a family ski vacation in the Austrian Alps. The vacationing troupe included Mork-Ulnes, his interior designer wife and co-worker, Lexie, their children and Lexie’s parents—a retired couple from Sausalito, California. The couple, who wish to remain anonymous, had previously sold their second home on Tahoe’s West Shore to build a larger residence at Sugar Bowl that could accommodate their three grown children and partners, and seven grandchildren.

“They had a pretty clear idea of what they wanted as far as the type of rooms and number of rooms. But other than that, I don’t think anybody had a preconception at all about what the house was going to be like,” says Mork-Ulnes, who teamed up on the project with Truckee’s Bruce Barth Construction. “But during the ski trip, we saw a lot of good examples of contemporary architecture in an alpine setting, and I think that sort of set the tone as far as where the project was going to go.”

In a melding of cultures, Mork-Ulnes and his supporting cast—Lexie, Greg Ladigin, Anatoly Starr and Kyle Anderson—came up with a design that combined the traditional alpine chalet common in Europe with the indoor-outdoor-living aspect popular in California. The result is a 3,300-square-foot mountain getaway that is equal parts functional and sleek, with a clean and bright interior and contrasting dark exterior that blends with the surrounding woods. 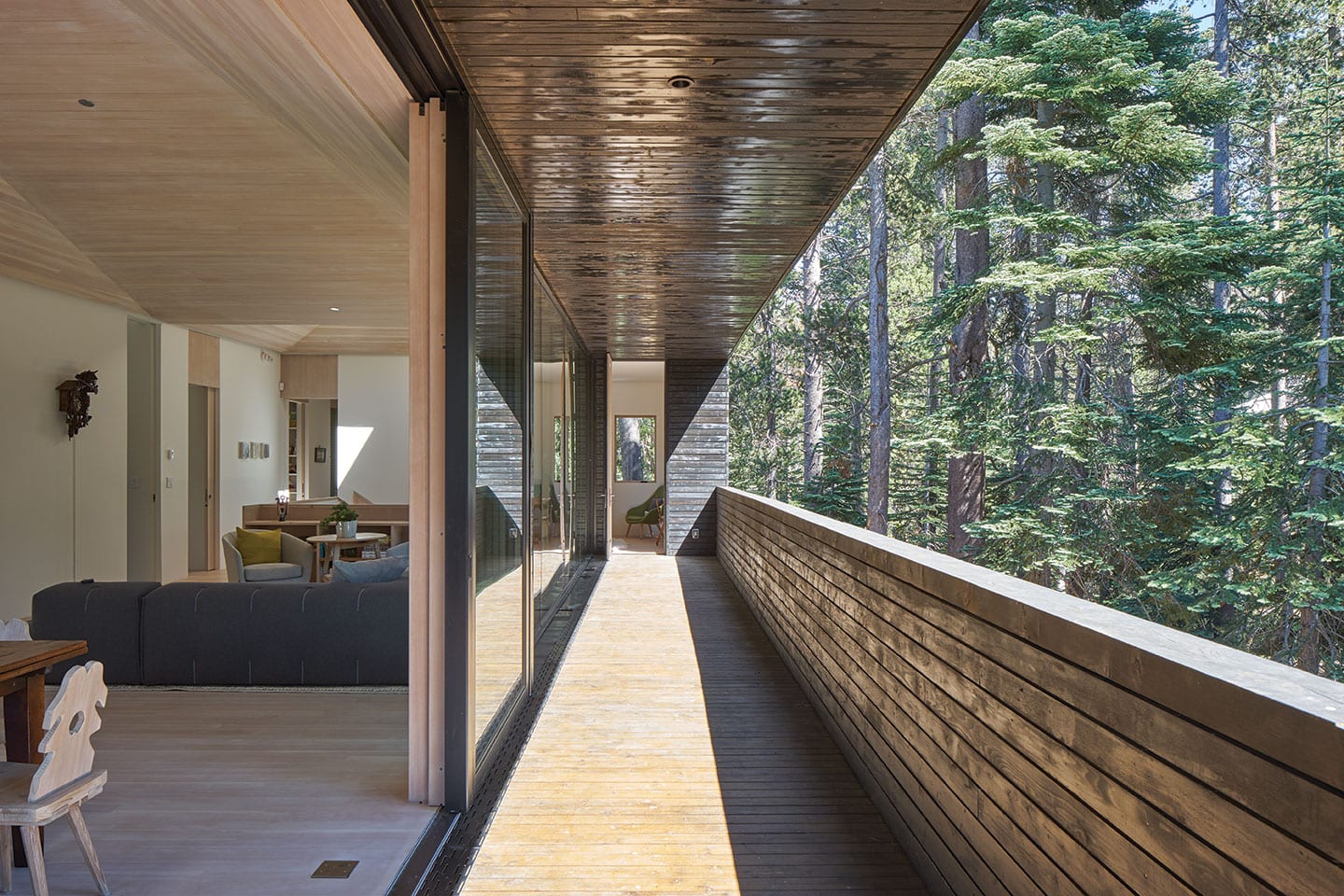 South-facing covered decks stretch the length of the building on both the second and third floors, while extensive glass windows and doors on the upper level allow for unique views into the tree canopy. The dark color of the exterior is created by a pine tar treatment, photo by Bruce Damonte.

The dark color of the exterior is from a pine tar treatment applied to the cedar siding—an age-old practice in Norway that can still be found on 1,000-year-old barns and stave churches.

“What that does is it coats the wood so that it will last pretty much forever if you continue to apply about every 10 years or so,” Mork-Ulnes says. “It prevents any sort of rot or insects from attacking the wood. And it has a nice effect, too, with the way it allows the building to recede into the forest with the dark color.”

In response to Sugar Bowl’s large snow totals—the resort received nearly 800 inches this past winter—the structure was lifted off the ground on a concrete entryway and two separate concrete plinths. The main mass of the building rests on top, giving it a hovering appearance.

“When Casper came up with this design, we didn’t realize how exciting it would be,” says the owner. “He really hit the nail on the head, so to speak, as far as unique.”

While the concrete entryway serves a functional purpose, with doors on each end leading to mudrooms with lockers, ski racks and a ski-tuning bench, the main living quarters are housed on the second and third floors.

Both levels are accessed by way of a floating, tiered staircase that spirals upward from the concrete entry. Thick Douglas fir stair treads provide a solid, cabin-like feel, while a lye was applied to the wood to lighten the color and prevent it from yellowing over the years. A skylight is located directly above the staircase.

“We wanted to bring natural light from the skylight all the way down to the ground level, so you had an idea as you enter this concrete bunker that there is some light coming from above, and that light increases as you move up the stairway,” Mork-Ulnes says. “You also start catching glimpses to the outside through the stair treads as you move up.”

The second floor, which can also be accessed from a covered external staircase, essentially serves as the guest wing for the owners’ grown children and grandchildren. It consists of a media/playroom and laundry room, along with a kids’ bunk room, three bedrooms and three bathrooms. A covered, south-facing deck runs the length of the building on this floor, with doors leading into each of the three adult bedrooms.

“The house is built for four families, really,” says Lexie. “The plan of the bedrooms and the bathrooms really function quite well for all the people who need to get ready for skiing at the same time and getting the kids to bed. The plan was very thoughtful.” 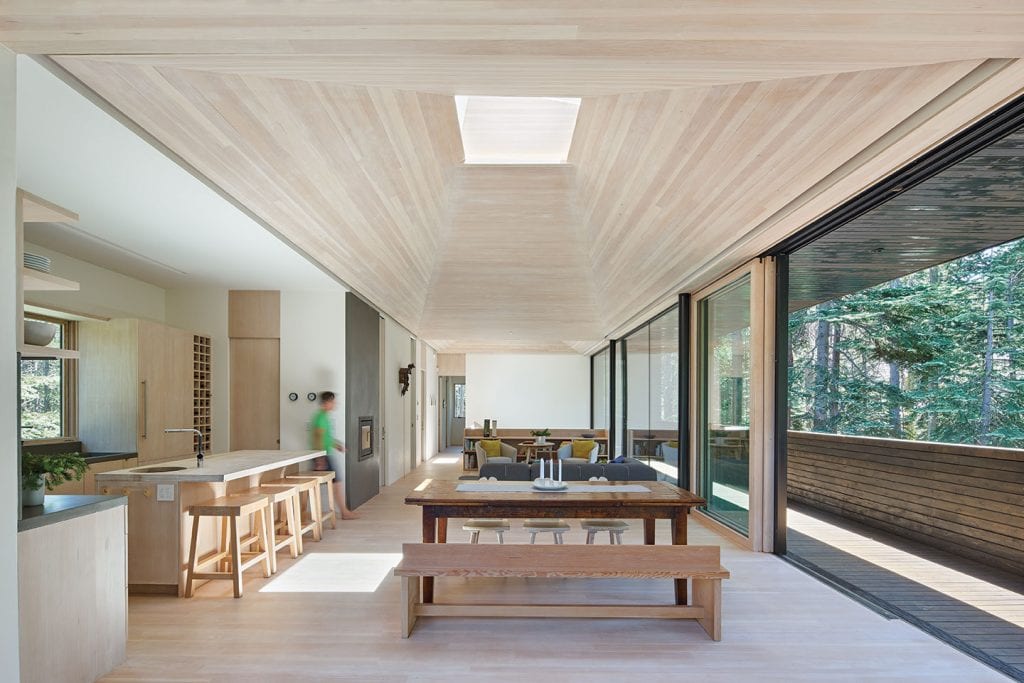 The great room is clean and bright, with an open-plan configuration and two vaulted ceilings with skylights to increase light, photo by Bruce Damonte

Upon reaching the top of the stairs, the upper floor opens to an expansive great room that includes the living, dining and kitchen areas. A small media room and the master bedroom are also located on this floor. The lye-treated Douglas fir used for the flooring and cabinets adds to the clean and bright aesthetic, and two vaulted ceilings capped with skylights provide additional light.

Floor-to-ceiling glass stretches the length of the great room and beyond, affording views out to the surrounding pine and fir canopy. Weiland lift-and-slide doors open the entire southwest corner to the clean mountain air.

“It feels quite intimate even though it’s a very big space,” Mork-Ulnes says of the top floor. “The way the ceiling is shaped, it kind of recalls a little bit more to the chalet scale.”

His favorite aspect, he says, is the view to the trees, “especially in the summer when you have all those doors open and get the smell of the pine trees.”

The home was also designed for energy efficiency. The shallow slope of the roof holds enough snow to act as insulation, while the living spaces are oriented south to capture the winter sun, with large overhangs that help protect the extensive glazing from heat gain in the summer.

But for the owners, the best thing about their one-of-a-kind home is when it’s full of their favorite people. The grandchildren, after all, are the ones who inspired Grandma to name it.

“We teasingly call all the little kids trolls, and ‘hus’ is Norwegian for ‘house,’ so in the construction phase we started calling it ‘Troll House’ and it kind of stuck,” she says. “It’s just a fun name and it really fits it. The house was designed to be fun for the grandchildren, because we’re just kind of those crazy doting grandparents that can’t get enough of the grandkids.

“But it really is a great house, and we love it.”