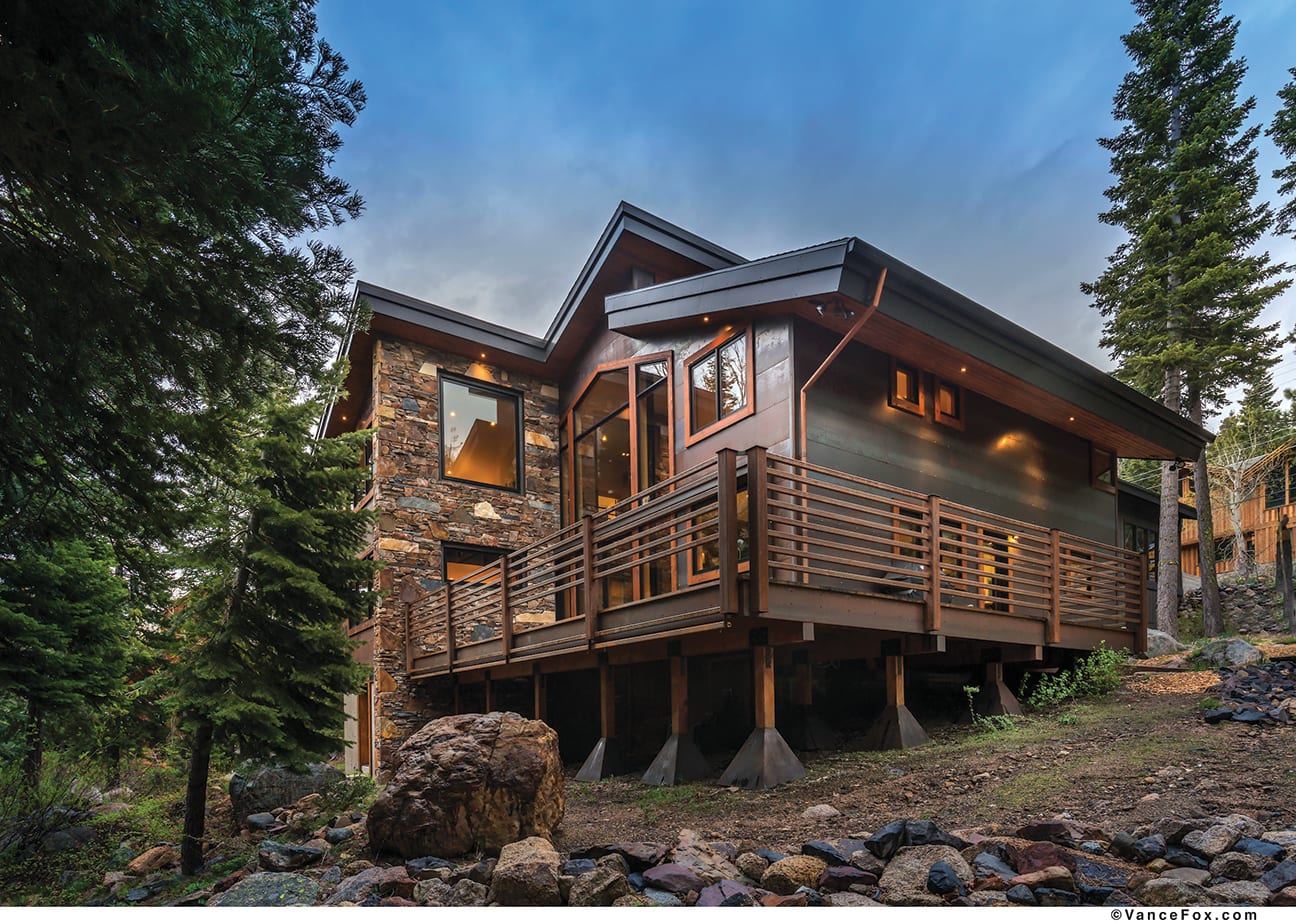 The home, originally built sometime in the late 1960s or early ’70s along the Bear Creek corridor. has a long history of bear visits 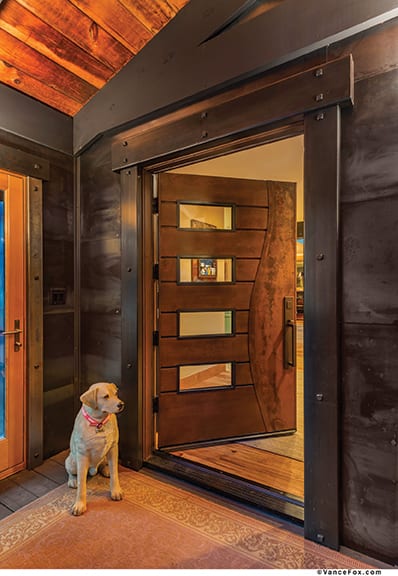 Just inside a door opening to the sheltered exterior stair, a rectangular piece of slate painted with a mountain scene—a bear fishing in a creek—hangs on the wall. The word “WELCOME” is stenciled above the woodsy image in large black letters.

Considering all the bear visits and break-ins occurring at Libby and Mike Murphy’s Alpine Meadows house over the years, Todd Mather, a Tahoe City architect and personal friend of the owners, added a modification to the message by fixing a small sign with the word “NOT” above the “Welcome.”

Originally built sometime in the late 1960s or early ’70s, the house rests on the edge of open space along the Bear Creek corridor—seemingly right on the daily travel route for local bears. Just four houses down from her current residence, Libby Murphy’s parents bought property in 1969 and built a home. Having spent significant time in Alpine Meadows for the last 50 years, Murphy knows the bears have always been a factor.

“Even as a kid I remember bears visiting my parents’ place,” she says.

But well before the challenge of bear visits were addressed at the Murphys’ current residence, other issues with the house demanded attention. Approximately 10 years ago, the stone chimney was pulled off the roof thanks to heavy spring snows. Murphy met with contractor Norm Milz to discuss potential fixes. 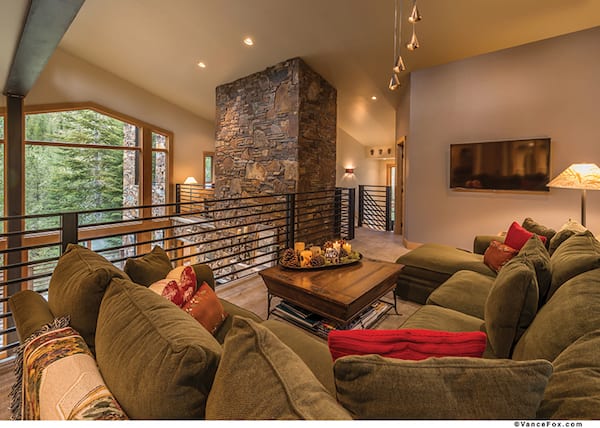 Her Labrador retriever followed them up into the loft as they inspected the chimney damage but was unable to find the bravery to walk back down the spiral stair. Milz didn’t hesitate to pick up the dog and negotiate the narrow, curving steps to deliver the squirming, eager-to-jump canine back to the main level. At that moment, Murphy says she knew Milz was the contractor she wanted to work with.

“When we got back down, I turned to Norm and said, ‘You’ve got the job.’ Anyone who will carry my hundred-pound dog down a circular stair is OK,” says Murphy, laughing. “Norm and I went on to develop a wonderful working relationship and a wonderful friendship.”

The chimney repair was the first of four remodel projects that Milz worked on with the Murphys. The last one started in 2011 and was the most encompassing of all: a sizeable addition of square footage, stair relocation, new bedrooms and a one-of-a-kind solution to the issue of bear break-ins. 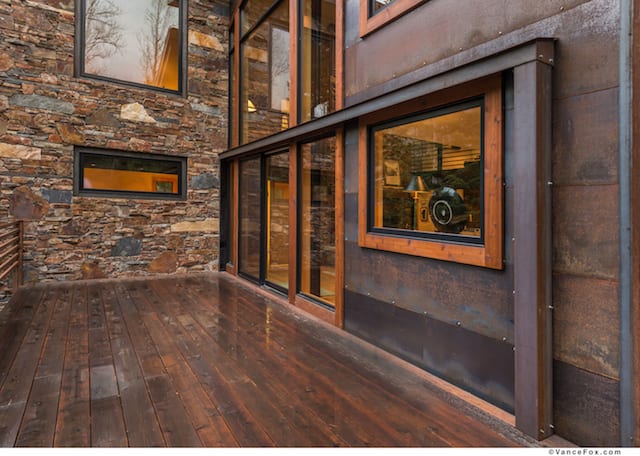 “Our neighbors had a bear hibernating in their crawl space one whole winter, and the summer before our big break-in, there was a mother and cub who visited us frequently,” says Murphy. “They’d come up on the back deck and push against the sliding glass door. So, when we did the big remodel, we considered what we could do to protect from break-ins, especially focusing on what might be effective when we’re away. Norm came up with the idea of this door with an engineer he knew.” 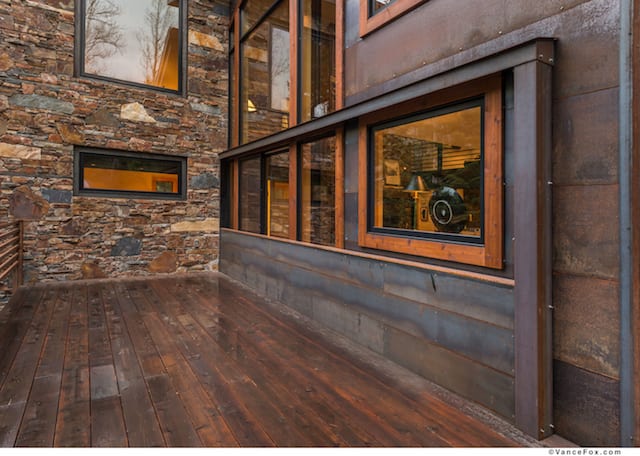 Milz suggested a truly stealth solution, designing a bear door like no other. A 1,600-pound rectangular slab constructed with a tube-steel frame matching the overall dimension of the sliding glass door and adjacent window openings was finished with hot rolled steel to match the siding on the house. Fitted with two hydraulic pistons, the “door” is lowered into a concrete vault below the surface of the deck, where it is housed when the home is occupied. Push a button and the door, or wall, really, slowly slides down out of sight. A deck board fitted on top flushes out perfectly with the deck surface, like the barrier was never there. 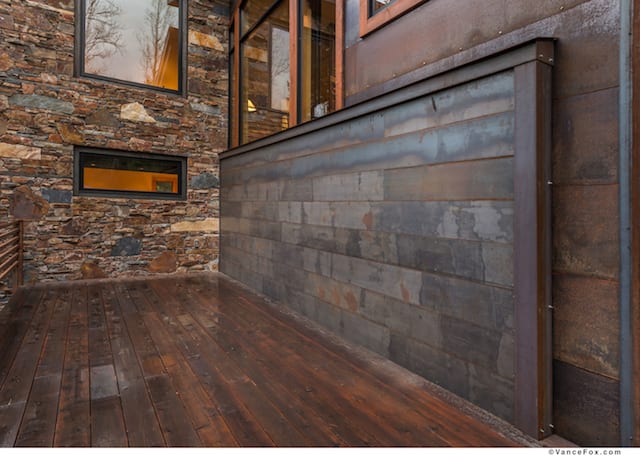 The bear “door” in action

“You can’t break into this thing whether you are a bear or a human,” Murphy says with a laugh.

“This thing is kind of fun,” adds Mather. “And no one else has one.”

The steel-wrapped gizmo of a door is really the “pièce de résistance” of a slew of clever, beautifully crafted and designed bits of steel detailing and finishes throughout the entire house. Steel is featured in unexpected places—entry cubbies, closet doors, drawers and open shelves recessed into ledgestone masses, interior and exterior railings—yet doesn’t lend to a cold or industrial feel. The material makes the house somewhat echo the place it’s in: a demanding but jaw-droppingly beautiful environment.

Sadly, Milz died of cancer a few years after the last remodel was complete, bringing an end to the 10-year tradition of Murphy, Milz and Mather (all born within the same six-week timeframe) celebrating their birthdays together with a ski day. Listening to Murphy describe her years of working through projects with Milz, it’s plain to see that they had a truly collaborative relationship that led to personalized and signature outcomes.

And at every turn through the house, in admiration of yet more custom detailing, Mather defers to Milz’s creativity. 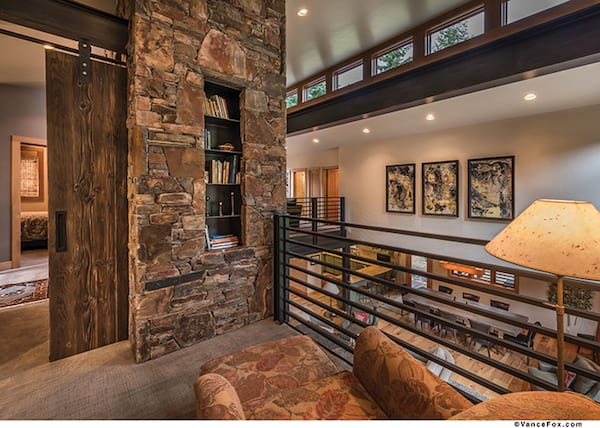 Steel appears throughout both the exterior and interior, including open shelves recessed into ledgestone masses

“I did the architecture but Norm did a lot of the detailing. He was really responsible for how well it turned out,” says Mather. “He always did a brilliant job.”

When Murphy packs up to head back to her home in the Bay Area, she says, “Goodbye, cabin,” just as her mother did all through her childhood as the family departed from four doors up the street. But before issuing her farewell, with just a push of the button and the 72-second ascent of the bear door, she also pulls the sense of welcome away from any bears that may come sauntering by. She knows for certain that even though the bears may visit, they’ll now clearly understand they are not the guests the “Welcome” sign is inviting in.