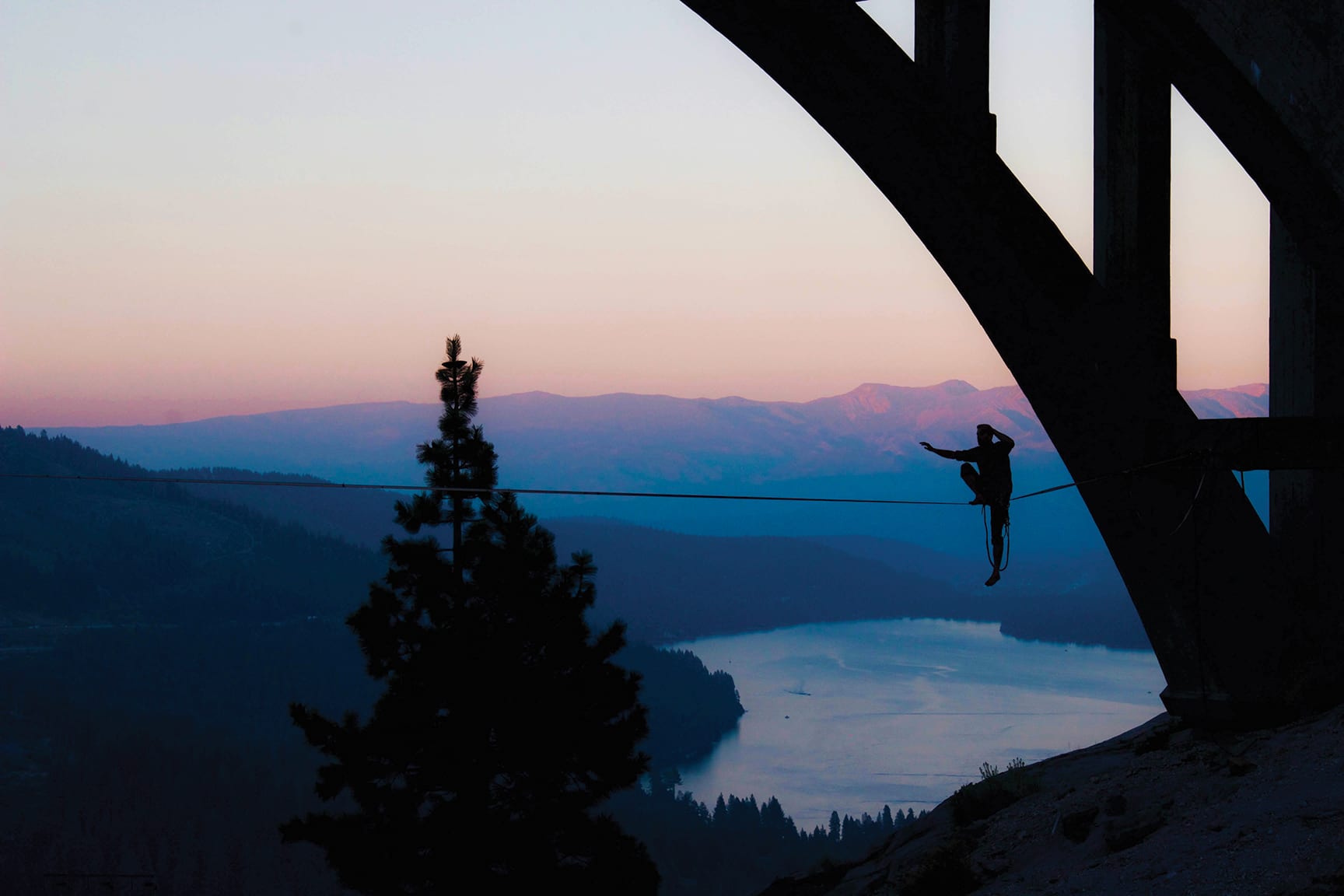 A highline, as a noun, is an elevated length of tubular webbing tensioned between two fixed objects. The webbing is an inch wide and has a tensile strength of 4,000 pounds. It is secured on either end by a complex system of anchor points and about 50 pounds of hardware.

As a verb, to highline is to cross a deep void with the meditative poise of a monk, the balletic grace of a dancer and the muscular fluidity of a big-wave surfer. It is an act of perfection, and for the few minutes it takes to cross, all in existence is aligned and beautiful.

At least, that’s what I’ve been told.

To tell the truth, I have never walked a highline. The photo implies that I have, but it is one of those gentle deceptions we Millennials are so good at telling.

To see this picture on Instagram is to see a lissome silhouette backlit by the last of the light over Donner Lake, captured in a moment of quiet celebration following an adrenal and cerebral mastery of self and space.

It is true that a picture is worth a thousand words, but nobody said those words have to be honest.

When I look at this picture, I see failure. Not the brave and poignant failure of songs and legends—no—but the tedious, darn-near comical kind that a good friend suddenly remembers after a beer or two.

When my buddy Rick suggested we set up a line under the bridge at Donner Summit, I was game. In college, he and I had spent countless summer evenings in parks with girls, where we would show off our cool tricks on the slackline—an activity that is to highlining what climbing a tree is to climbing Everest.

After college, Rick began to perform for stakes higher than the approval of a woman in a sundress. He moved to Bozeman, Montana, found a community of hardcore highliners, and practiced the craft on a 50-foot line over a thousand-foot drop. On a windy day, a line with that kind of exposure will hum like the rattle of an angry diamondback.

Meanwhile, I was happy to keep the stakes exactly where they were. Back then, you could still impress girls in parks with a 15-foot line a few feet off the ground.

By the time Rick and I moved to a little home just west of Soda Springs, he had already bagged a few incredible traverses. He had also just purchased the last pieces for his own complete highline set, and was eager to rig it up under the Donner Summit bridge as soon as the snow melted.

Rainbow Bridge is the apotheosis of magnificent Old Highway 40 and is a popular pullout for motorists and tourists who want to stretch their legs, inhale a lungful of mountain air and admire Donner Lake glittering below.

It is also so well-suited for highlining as to suggest its original intent was not as infrastructure at all, but rather for those who want two photogenic anchor points between which to walk.

So it was for Rick, and me, the tag-along who was endlessly game for adventures well outside my wheelhouse. One late afternoon in early June, we loaded our gear and headed up the pass.

We anchored the line on the east footing first, then walked the webbing down to the bottom of the canyon and back up the other side, paying out line all the way to the western footing. We spent the next hour anchoring and tensioning the 75-foot line until it was practically humming under the strain.

We triple-checked every knot, pulley, shackle and carabiner, and then Rick put on his harness and clipped into the line with a 6-foot tether. He stepped out onto the webbing and walked down and back with ease. He walked it again. He stretched out and held a few poses. He squatted down on one leg and popped back up.

After 30 minutes of graceful athleticism, he stepped off the webbing and onto the cement footing. “Your turn,” he said.

I had never worn a harness on a line before—when you’re walking a few feet off the ground, there’s no need to—but Rick had made it seem so effortless. Because we had been equals in college, I assumed my skills would match his step for step.

I clipped into the line, scooted away from the cement footing, got my right leg under me, and popped up… and immediately fell. My foot caught as I went over, the webbing slapped my thigh, and I found myself upside down with a pounding heart and a harness wedgie.

I grabbed my tether, turned right side up, and hoisted myself back on the line. Again, I got my leg under me, took a deep breath, and popped up. This time, the slap of the webbing wasn’t as painful, but the harness wedgie dealt another powerful blow to my pride and groin.

I righted myself, got my leg under me, popped up, and fell—about a dozen more times.

“Try starting with both legs on the line,” Rick yelled. I tried that. I fell.

“Try leaning more over your feet before you pop up,” Rick yelled. I tried that. I fell.

“Try… um…” Highlining is a hard skill to teach from the ground.

I got back on the line and took a few slow breaths. The webbing was vibrating from wind and tension, and I had sewing machine leg, a condition familiar to rock climbers and those who are not very good at standing on a highline. I lifted my right leg and fell off before I even tried to stand.

As I pulled myself back up, I heard a voice call out from the rocks below.

“Hey, man, I’d love to get a good picture of you walking across the line.”

“Excuse me?” I yelled back.

“My photos are featured in Outside Magazine, and the light right now is perfect. I’d love to get a good picture of you walking.”

The light was indeed perfect. I found my balance, got my leg under me, and tipped over. I heard the rapid-fire shutter below. I had just given him 100 photos of a man falling and hanging upside down. At least the light was perfect.

“The sun is setting right now,” he called up. I heard Rick from over my shoulder: “Come switch with me. I can get the shot.”

By now, the sun was pretty much gone. In a few minutes, the perfect light would be, too, and there wasn’t enough time for me to scoot my way back to the cement footing and switch with Rick. I pulled myself back up to the line. I took one slow breath. I leaned up and over my right foot. I pushed up with all my remaining strength and balance. And fell.

I dangled from my tether for a long moment and watched the light fade. I deserve this harness wedgie, I thought. I had failed myself, sure, but it was worse that I had also failed Rick, the photographer and the readers of Outside Magazine.

I pulled myself back on the line and sat there in shame as the light faded to a dusky purple. Rick must have stepped back and snapped a photo of me. I guess he thought I would want a nice souvenir.

That night was a typical bachelor weekend night for Rick and me—FIFA 2016 on Xbox, a sixer of Lagunitas and an extra-large half-Greek-half-Thai pizza from Main Street Pizza in Colfax—but I couldn’t stop myself from thinking: That picture in Outside Magazine would have been huge on Instagram.

Rick sold all his gear a few years back and I moved to Washington D.C. for work. I don’t expect either of us will attempt to walk a highline again. I certainly have no plans to.

But I will always have the photo. Memories are corruptible, and the truth is too complex for a quotable caption, but the photo remains. How can one young man resist the deceptions that define how we Millennials use social media?

When the memories fade and the truth is a dusty relic, this is how I want to be remembered:

Michael Rohm is a freelance writer and humanitarian storyteller based in Washington D.C. He would like to thank Rick for tolerating his failures on the highline, and for helping with the technical details of a story that he will never let him live down.