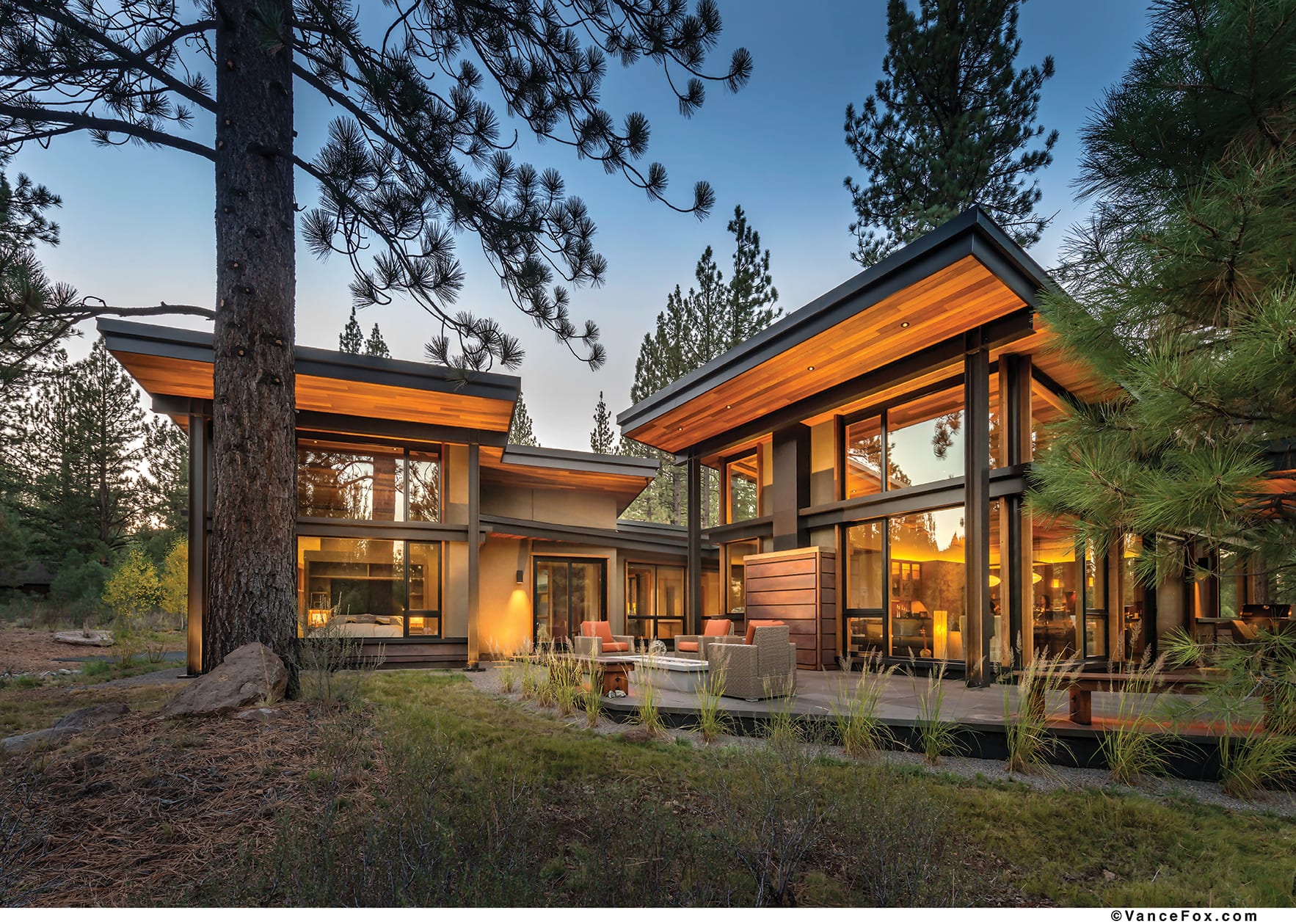 Nestled in the 906-acre Lahontan Golf Club community in Truckee, the Meadow House takes inspiration from its alpine surroundings. Sited at the end of a secluded street, the 2,475-square-foot home’s liberal use of glass affords striking views of the surrounding trees, meadow and ski runs at Northstar. 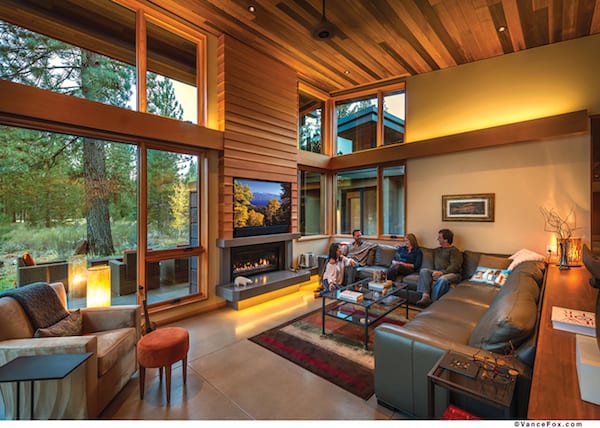 “The setting allows for much of the glass that brings in light and views without compromising privacy,” says Scott Ryan, founding principal architect of Ryan Group Architects, who worked on the house alongside Truckee Custom Homes owner Jim Riley.

The high level of privacy and generous use of glass were both design directives from owners David and Julie Lynch, who previously commissioned Ryan Group Architects to envision a multilevel house in 2009.

When they first mentioned their desire for a single-story home in the Tahoe area where they could eventually retire, Ryan had the perfect half-acre site in mind. “He knew about the lot even though it wasn’t for sale at the time, and he knew what he could do with it in terms of putting a single-floor home there,” says David Lynch. “Having the architect know the lot and the exposures was a huge factor in the success of the project.”

The couple, who have two grown children, wanted a house that was small enough to easily maintain but large enough to occasionally host friends and family members who come for overnight visits. They also prioritized a one-story layout that would ensure easy mobility and guarantee that the house could accommodate their changing needs in the years to come. 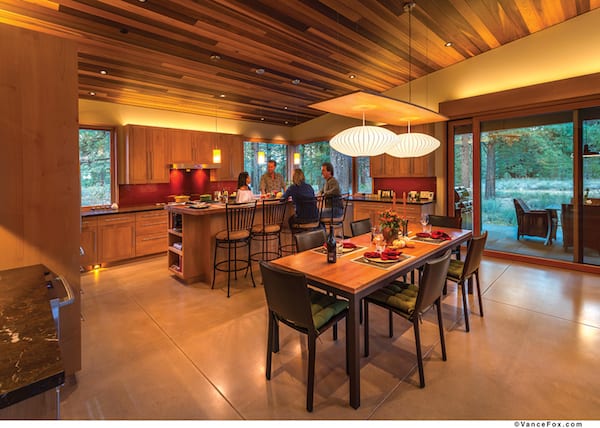 “We call the concept ‘aging in place,’” says Lynch. “Our goal was that as we got older, we wouldn’t have to climb multiple flights of stairs.”

From a lack of stairs to easily accessible showers, every square inch of the home was built with an eye to the future. With three bedrooms, two and a half baths and an open, inviting setup, the house delivers on all of the couple’s must-haves.

“David and Julie wanted something that was clean, simple and livable,” says interior designer Annie MacFadyen of Ryan Group Architects. Western red cedar ceilings, Douglas fir accents, and slab-on-grade polished concrete floors provide warmth and character throughout the house. The use of radiant heat in the concrete floors, as well as the passive solar orientation to the south and east to accommodate the early-rising couple, removed the need for air-conditioning systems and added a level of environmental awareness to the space. And, despite seemingly functioning only as an art piece, a large roof overhang above the south wall of glass has a practical eco-conscious role as well: It shades the house from the sun during the warmer months and allows it to reach the great room during the colder months. 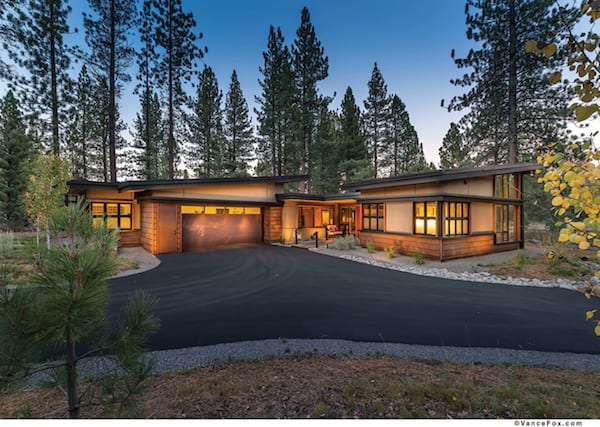 To safeguard against the threat of wildfires, the couple chose materials with a lower chance of combustibility. As a result, the exterior of the home incorporates little wood, save for the trim on some of the vertical walls and the underside of the roof overhangs, which functions as an extension of the wood ceilings inside. Instead, Ryan used tempered glass, cement plaster, concrete, and painted and weathering steel on the exterior.

In the great room, a fireplace with vertical-grain Douglas fir boards above a concrete hearth and mantle creates a striking focal point. “The horizontal emphasis of the board and battens was used as a visual foil to the vertical nature of this element,” says Ryan.

“It’s very comfortable, and we do most of our living in that space,” adds Julie Lynch. A wealth of windows provides a front-row seat to the changing colors and weather.

The open-concept room flows freely into the dining area and kitchen, which shows off a center island and wood cabinets. 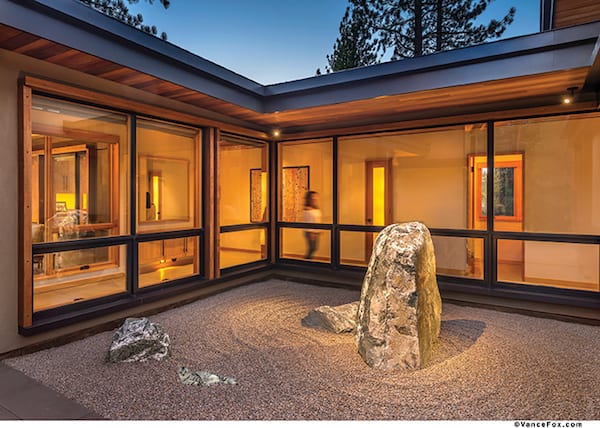 “The red glass backsplash in the kitchen is pretty original,” Riley notes. “The company, Glasskote USA, uses a proprietary glass paint on the backside of the glass. The notched tempered glass was made in Los Angeles, shipped to Oakland for the paint to be applied, and then shipped to Truckee for install.”

The laid-back gathering spot opens to a large patio, where the couple enjoys sipping drinks by the fire pit and watching the stars. A nearby covered alfresco dining area and barbecue station make it easy for the couple to entertain friends on crisp Sierra evenings. A large Greywacke rock that Ryan found in a rock yard in Reno serves as a bold centerpiece for the alfresco atrium.

“Rather than fill the atrium with trees or flowers, Scott made a brilliant design decision with the rock,” says David. “He convinced us that it would be a lot easier and lower maintenance, and it’s a great focal point to help link the house together.”

Back inside, the master suite continues the connection to nature thanks to high ceilings and walls of windows that look out to the pine, fir and aspen trees beyond. “It’s almost like sleeping outdoors sometimes,” says Julie. In the master bath, black granite vanities, a walk-in glass shower and a deep soaking tub create a sumptuous sanctuary. 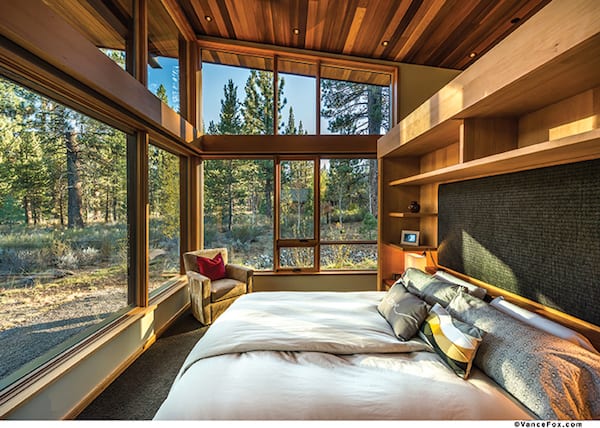 Located within easy driving distance of the crystal clear water of Lake Tahoe, the Meadow House offers a tranquil setting designed for reflective evenings and intimate parties alike. Should the mountains be calling, there are a wealth of nearby ski runs and hiking trails in the area. But with their own wooded wonderland in the backyard, David and Julie may find that the comfort of home is the sweetest attraction around.