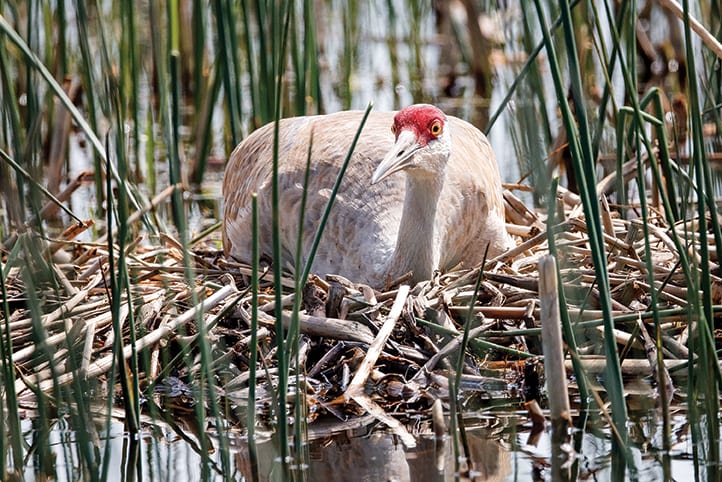 in Environment | Summer 2019 | Written by Will Richardson

On June 9, 2015, the El Dorado County Animal Services received an unprecedented call. They were asked to remove a large rattlesnake from underneath the porch of a home in the Bijou neighborhood of South Lake Tahoe, in the core of the city’s population center. According to supervising officer Robert Gerat, it was the first rattlesnake call his office had received in his 20-plus years with the agency, and it was the first documented rattlesnake within the Lake Tahoe Basin that we, or anyone in the Tahoe Biologist Interagency Group, are aware of. 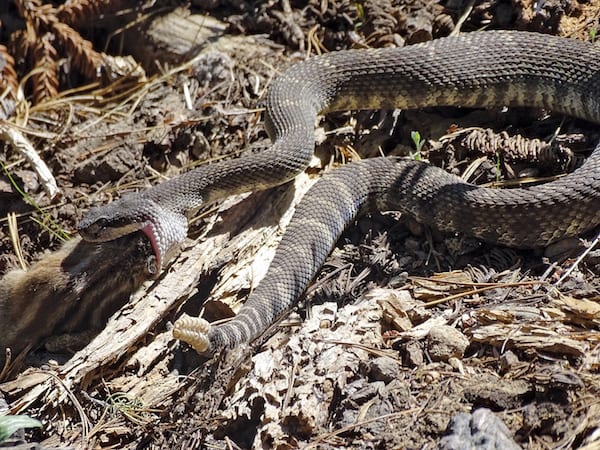 A rattlesnake swallows its prey near Loch Leven Lakes on Donner Summit, photo by Jim Beres

The 2015 Bijou incident fits nicely into a steady pattern of increased rattlesnake sightings at higher elevations, likely driven by climate change and the trend toward longer, warmer, drier summers. Interestingly, it appears the snakes may be coming over the higher mountain passes from the west. Recent years have produced a stream of rattlesnake photos from along the Sierra crest: Pyramid Peak, Bear Lake near Barker Pass and Donner Summit. The Loch Leven Lakes area seems particularly active with reports and photos, and in 2017 a dog was bitten there. That same year, another rattlesnake was photographed at the base of Lost Corner Mountain, just up General Creek from Tahoma in Sugar Pine Point State Park.

We have probably all heard of prior rattlesnake stories from the region, but then again, people talk about Bigfoot sightings, too. Further, biologists have been scouring the Tahoe area, at times quite thoroughly, since the late 1800s. Things are changing, and snakes are not the only recent addition to Tahoe’s fauna.

Far more insidious than rattlesnakes, which at least provide the courtesy of a warning buzz, is the spread of ticks in the region.

There seems to be a general consensus that ticks have been present in eastern Truckee, particularly in the vicinity of Boca, Stampede and Prosser reservoirs, since time immemorial, but that they have moved up in elevation and were not previously present at Donner Summit. Less clear is whether or not there have always been ticks within the Tahoe Basin. It is certain, however, that ticks are widespread now, and can be found in many places where they are not expected. I have found one crawling on my pants on Donner Summit.

Thankfully, these are virtually all dog ticks (Dermacentor spp.) and not the smaller, Lyme Disease–carrying Ixodes. However, a single Ixodes was found in the Sagehen area just north of Truckee in 2016, likely a harbinger of things to come. 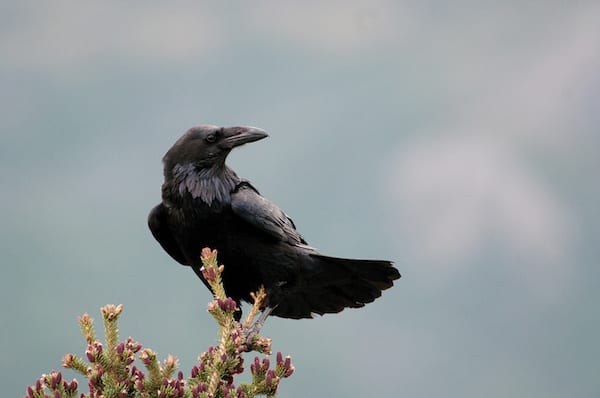 Once a rare sight in the area, ravens are now common throughout the Tahoe Basin, courtesy photo

These faunal changes and range expansions are nothing new. Various species have expanded into the Tahoe region, often human assisted, for decades.

Common ravens live up to their name these days, and it is hard to imagine a time when they were not conspicuous residents of the area—especially on trash day. Yet we know precisely when Wally Sumner spotted Tahoe’s first, a single bird circling the summit of Ralston Peak on July 19, 1975.

It was a big deal at the time. Ravens are hard to miss, but none had been recorded in the area during the preceding 100 years of relatively steady attention by ornithologists. A 1978 Audubon checklist considered them to be quite rare, summer-only visitors. By 1990, they could be seen during the winter, but a 1994 checklist still describes ravens as “uncommon.”

Now they are ubiquitous throughout the wilds and neighborhoods, ski area parking lots and unattended dumpsters. Flocks of nearly 250 birds have been seen gathering for their evening roost in South Lake Tahoe in winter.

The white satin moth, a close relative of the Gypsy moth, is the latest invader to Tahoe and is causing a great deal of trouble for our aspen stands.

This pure white Palearctic menace arrived in both Massachusetts and British Columbia in the 1920s. It spread eastward across the northern Rockies before doubling back south and west through Nevada. Biologists first noticed outbreaks at Tahoe in 2012, when entire swaths of aspens in North Canyon near Spooner Lake were laid bare by the voracious caterpillars. The full ecological impacts of this defoliation are unknown, but we are studying them closely and searching for possible management options. 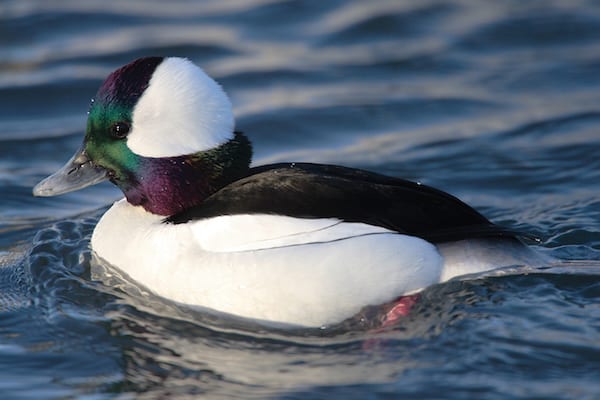 Bufflehead ducks are among the species that have perplexed biologists after mysteriously expanding their range into the Tahoe area, photo courtesy NPS

Not all of Tahoe’s faunal changes are viewed with concern, and the causes for these shifts are often unclear.

The bufflehead is a handsome, small duck that nests in large woodpecker holes near quiet, forested ponds. Historically, this boreal species was restricted in California to small isolated pockets in the extreme northeastern corner of the state.

During the late 1990s and early 2000s, the species rapidly spread southward and began breeding throughout the Tahoe region and Northern Sierra Nevada. Broadly speaking, climate change models predict northward and upward range shifts for most species, so this range expansion was quite unexpected.

Another perplexing range expansion that occurred in roughly the same timeframe at Tahoe is the Nuttall’s cottontail, also called the mountain cottontail. They were always present in the region, but mostly restricted to high, rocky, sagebrush habitat on the Nevada side of the lake. In fact, they were so few and so range-restricted that the U.S. Forest Service’s 2001 Lake Tahoe Watershed Assessment considered the cottontail as a candidate focal species of conservation concern. 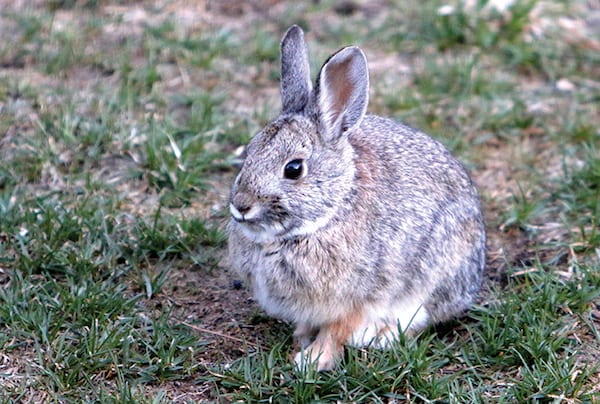 A Nuttall’s cottontail in Glenshire, photo by Sylas Wright

They came down off the ridges and exploded westward across the region starting in the early 2000s, sweeping across neighborhoods along both Tahoe’s North Shore and South Shore. By 2010 they had reached deep into Meyers, up into Olympic Valley and established in Tahoe City, and by 2016 the species closed the loop at Emerald Bay, now encircling and inhabiting low elevations around the entire Tahoe Basin.

Concurrent with this bunny explosion, gray foxes moved into the Tahoe Basin for the first time, having never been recorded prior to 2005. All of this has been remarkable to watch, yet we can only speculate what might be behind these invasions.

Most welcome are the species returning to Tahoe after long absences.

Sandhill cranes nested in suitable mountain meadows throughout the region prior to the Comstock Era, but hunting completely wiped them out before the ornithologists could document them, and the nearest breeding population for years was the Sierra Valley. 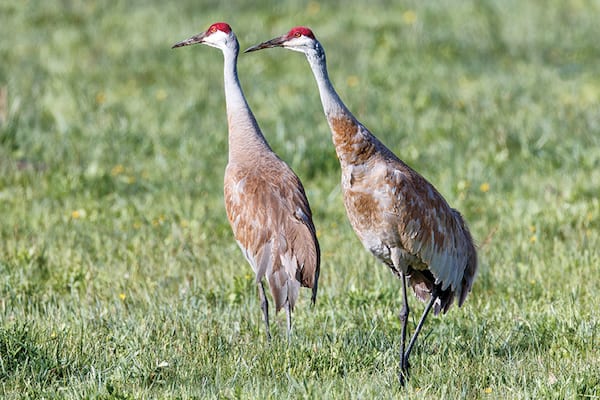 After a long absence from the area, sandhill cranes are now breeding again in the Tahoe Basin, photo by Mike Stram

The species has undergone an impressive rebound, including a steady, southward spread over the last 15 to 20 years along the eastern edge of the Sierra. They have recolonized the Carson Valley and all the way down to Bridgeport, and now the birds are moving back into the higher mountains. A pair was found nesting at the Teichert ponds in Truckee in 2014, and in 2018 crane chicks were found at Grass Lake at Luther Pass, marking the first record for the species breeding in the Tahoe Basin.

Peregrine falcons and bald eagles are two species that were nearly wiped out from direct persecution and reproductive failure due to decades of widespread use the insecticide DDT in this country. Both species were placed on the federal endangered species list, made dramatic recoveries and were eventually delisted. Lake Tahoe remains principally a winter haunt for the eagles, which take advantage of the fact that the lake’s unfrozen surface supports ample coots, grebes and ducks as prey.

The falcons, however, have been expanding as summer breeders in a way that biologists could not have imagined 10 or 20 years ago.

As the species was slowly rebounding in the 1980s and ’90s, many efforts were made to reintroduce peregrines to Tahoe, including releasing juveniles from captive breeding programs and rearing these young falcons at cliff-side “hacking sites.” From 1985 through 1991, a total of 18 juvenile peregrine falcons were released at Tahoe hack sites. All 18 birds fledged and dispersed, never to be seen again. Migrants and presumed transients steadily increased during the 1990s and 2000s, but it wasn’t until 22 years after the last hacking effort at Luther Rock that peregrines were confirmed to be breeding again at Lake Tahoe. 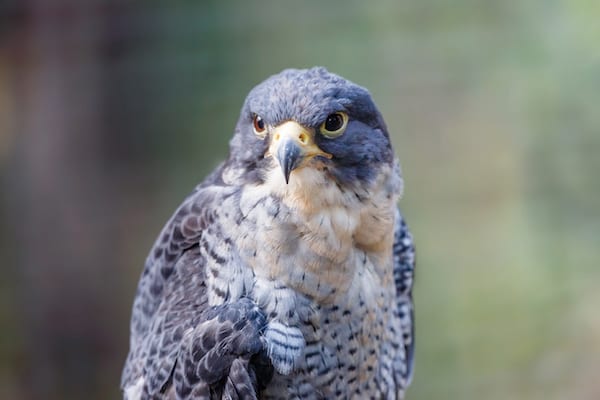 Peregrine falcons have rebounded well at Lake Tahoe after nearly being wiped out by decades of widespread DDT use, photo by Mike Stram

Once established, nesting falcons quickly spread to a number of suitable Tahoe sites, and lately it seems like we have a new nesting pair to monitor every other year. I can name a dozen nesting locations between Truckee and the Tahoe Basin, and close to 30 juveniles have fledged from nests at Lake Tahoe in the last 10 years.

It is said that change is inevitable, and that certainly seems to be the case with Tahoe’s wildlife. Some of these recent invasions may be viewed with dread, certain expansions with puzzlement, and a few rebounds and recolonizations with joy. Regardless, new species are certain to move into the Tahoe region. I wonder which will be next.

Biologist Will Richardson is the executive director of the Tahoe Institute for Natural Science.