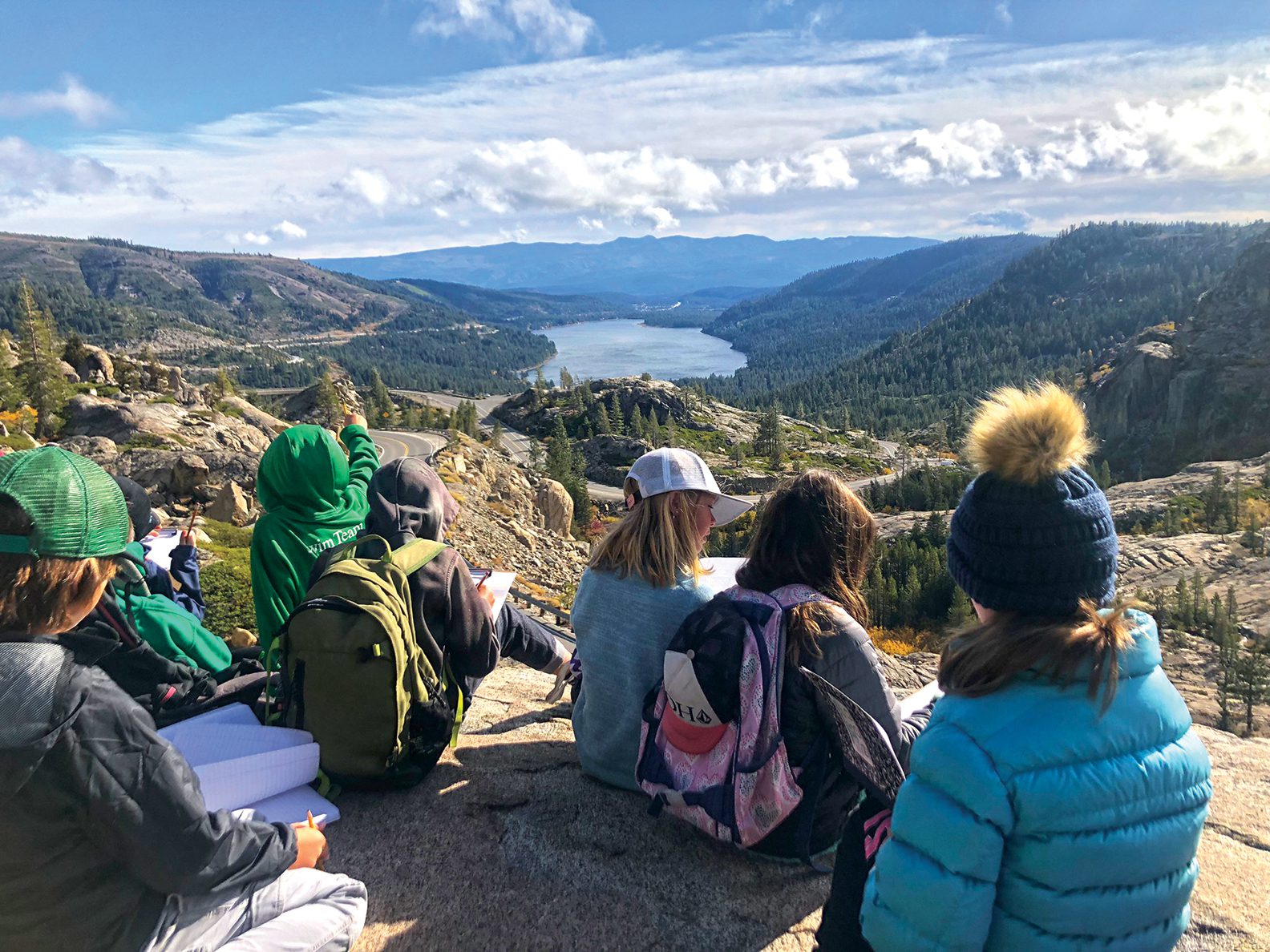 More than a decade after its founding, the Tahoe Institute for Natural Science remains steadfast in its mission to encourage conservation through education and outreach

Just past the break of dawn in early May, Will Richardson is in the parking lot of Aspen Grove in Incline Village, preparing to lead a group of birdwatchers into the woods. Coming from Truckee, Reno, Carnelian Bay—and even as far away as Oregon—each member of our party is equipped with binoculars and a healthy dose of curiosity about Tahoe’s natural world. 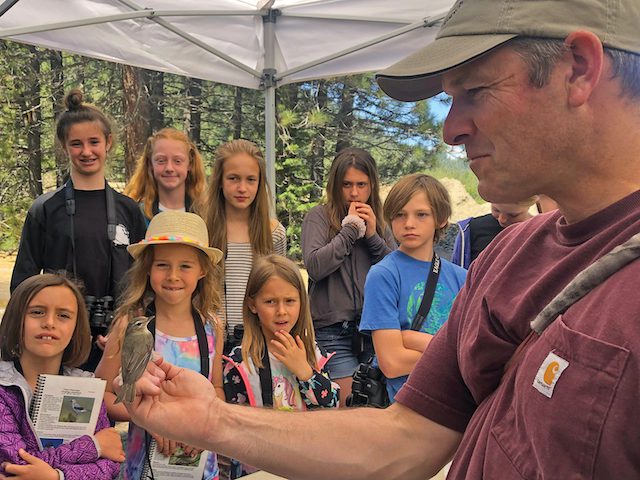 Will Richardson, who co-founded the Tahoe Institute for Natural Science (TINS) in 2010, shows a warbling vireo to students during a bird-banding field trip

As the group makes its way through the forest and over Third Creek, a myriad of juncos, siskins, chickadees, woodpeckers and warbling vireos stop, snack, sing, poop and rest in the trees. Meanwhile, Richardson, executive director of the
Tahoe Institute for Natural Science, explains the different behaviors and sounds of the birds, sometimes adding humorous commentary about how they act, look and interact with each other.

In an hour’s time, we’ve spied at least 10 distinct species of feathery residents, leaving everyone buzzing with newfound knowledge and appreciation for Tahoe’s fauna.

Seeing the glowing expressions on our faces, Richardson can’t help but smile. After all, helping the public connect to nature in the beautiful setting of Lake Tahoe is one of the primary objectives of the Tahoe Institute for Natural Science, which Richardson has spearheaded for the past 13 years.

“One of the greatest joys for me is sharing interesting natural history information and seeing folks have an ‘a-ha’ moment, because the natural world is so incredibly amazing, and it’s amazing in ways that are all around us but that we don’t necessarily see,” says Richardson. “We are definitely broadening perspectives, opening eyes and providing people with new and deeper contexts for living as part of a natural world, and in the Tahoe region more specifically.” 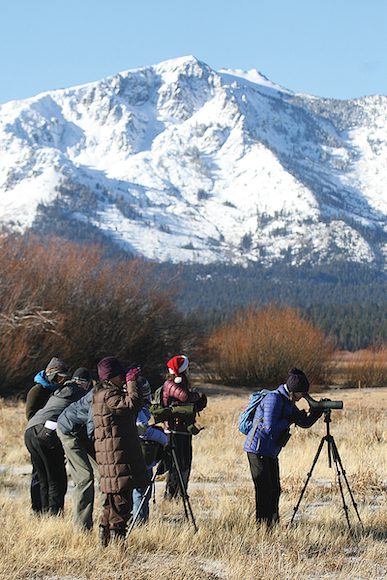 The Tahoe Institute for Natural Science coordinates an annual South Lake Tahoe Christmas Bird Count, when many bird species that are not permanent residents visit the area

A Need for Nature

Richardson fell in love with nature at a young age.

Growing up in suburban Chicago next to a vacant wooded lot, he regularly explored the outdoors, often coming home covered in dirt and spider bites, as his mother recalls. In high school, he spotted an indigo bunting in the wild—the same bird that appeared on the cover of a field guide he owned since his Cub Scout days—and had a revelation: What else had he been missing when out in nature? He started visiting local forest preserves, paying closer attention to what he observed.

After earning a degree in environmental studies from University of Vermont, Richardson moved west in 1994 to work with the Point Reyes Bird Observatory on the Northern California coast, banding birds in the summers and counting seals, dragonflies, butterflies and white sharks on the Farallon Islands in the fall. In the winter, he’d head up to Tahoe to ski.

Richardson repeated this cycle for several years before deciding to make the Truckee–Tahoe area his permanent home in 2001. He soon realized what his new residence was missing: An institution that could educate the public about the flora and fauna of the Tahoe Basin.

“I noticed there were a lot of visitors here but no good interpretation center, and everyone seems to want to connect to nature when they’re here,” says Richardson, who went on to earn a PhD in ecology, evolution and conservation biology from University of Nevada, Reno. “Even when you’re here to go skiing, mountain biking, hiking or just be in the outdoors, you’re still in the context of nature. At the very least, everybody wants a pretty view of the lake, even folks coming for the casinos.”

So, along with Kirk Hardie, Richardson co-founded the Tahoe Institute for Natural Science (TINS) in 2010, with a goal to one day open a natural history interpretation center that serves as a must-stop on a Tahoe vacation—much like the Monterey Bay Aquarium on California’s central coast.

“I’d been thinking about creating an organization like TINS since the late 1990s, but I knew I couldn’t do it alone,” says Richardson, who met Hardie while attending University of Nevada, Reno. “Kirk is a very experienced and passionate environmental educator and had already been working in the Tahoe area and was tapped into the network of existing environmental education organizations here. He also had a lot of prior experience in the nonprofit world.” 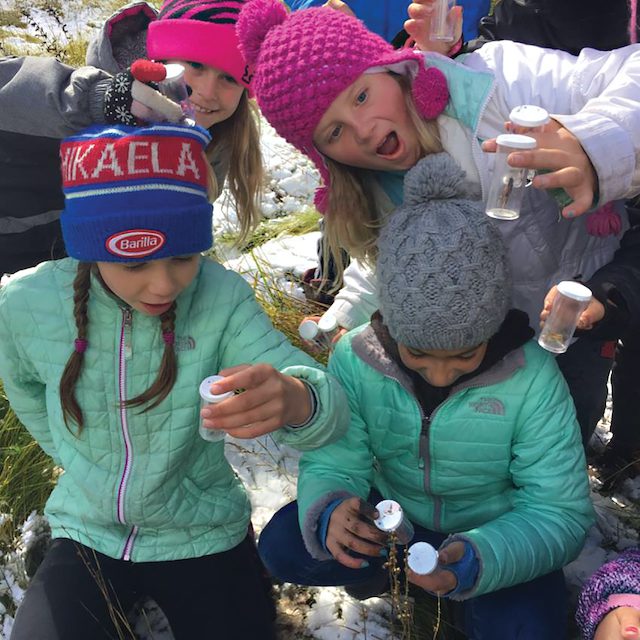 What began as a humble grassroots effort launched by two friends has evolved to become a thriving, member-supported nonprofit organization with a mission of “advancing the natural history, conservation and ecosystem knowledge of the Tahoe region through science, education and outreach,” according to TINS, which also conducts grant-based research.

With a lean yet efficient team of full-time employees—plus seasonal staff, volunteers and occasional interns—TINS has steadily built up its programming over the years to include nature clubs, summer camps, in-school natural history programs and field trips, and wildflower and bird walks, among other educational opportunities.

In addition, thanks to sponsorship help from the Martis Camp Community Foundation and Ace Mountain Hardware & Sports, TINS has also published children’s nature activity books—and given away thousands of copies since 2018.

And all signs point to continued growth. Richardson says the demand for kids camps in particular has skyrocketed in recent years, likely due to the influx of new residents combined with an increased desire by the public to get outdoors since the pandemic. Waitlists have gotten so long that TINS is working to create additional camps to accommodate the demand.

“I love the community we’ve created, being able to pursue curiosity, and that I can spend so much time in Tahoe’s nature and connect with it and use it to inspire us,” says Richardson, who became the sole executive director of TINS when Hardie left in 2016.

While gone, Hardie’s contributions to the organization he helped form will not be forgotten, Richardson says.

“From laying the foundations for our in-school science curricula and summer camps to developing and implementing policies and practices of a well-functioning nonprofit, Kirk was instrumental in driving TINS forward the whole time he was with the organization,” Richardson says of his former partner. “He put in a ton of effort to help make TINS what it is.”

While Richardson is deeply grateful for all of TINS’ supporters—including its numerous local sponsors—he admits he’d like to hire more staff so he can focus on long-term research and monitoring projects.

He passionately recounts a project he did a few years back when his team placed optical geolocators on Swainson’s thrushes and tracked their movement through the winter months. Equipping the birds with little backpacks consisting of computer chips, light sensors and batteries, Richardson describes the research method as “old-school sailor technology meets RadioShack.” 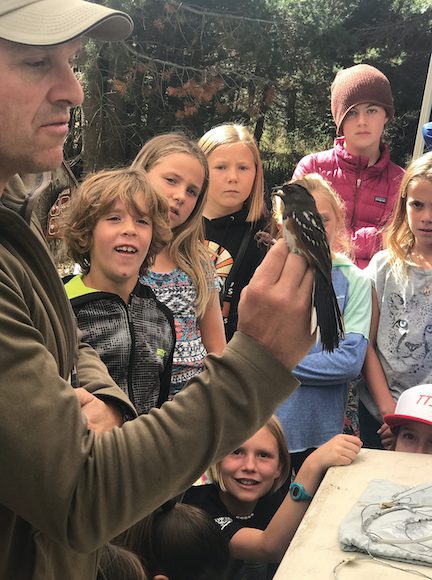 Will Richardson, along with TINS staff and volunteers, are dedicated to educating the public about Tahoe’s flora and fauna

As it turned out, the birds traveled all the way to northern Colombia before returning to Tahoe when the weather warmed.

“There’s so much potential for important research work here, and I have quite a few initiatives that I’d absolutely love to pursue … like migratory hummingbird banding, citizen science yellowjacket monitoring, Swainson’s thrush nest monitoring, montane hare camera trapping and migratory owl banding,” Richardson says, adding, “I love that we have the autonomy to pursue whatever ideas we want, in public outreach and research, side by side.”

Fortunately for Richardson, though he has a staff of only two full-time employees, it’s a quality crew, with Sarah Hockensmith serving as outreach director and Kendal Scott as education manager.

Hockensmith has been with the nonprofit since 2015, joining after she witnessed a group of children on a tour with TINS while she was doing tree work for the California Tahoe Conservancy. Seven years later, she’s thankful for the knowledge she’s absorbed while working with Richardson, adding that she’s now adept at giving lectures, writing articles and immersing herself among fellow experts.

“I saw the impact it had on youth and the community and knew TINS would offer me the most expertise to be the best naturalist in Tahoe,” Hockensmith says. “I knew working under Dr. Will would increase my knowledge and give me the chance to further educate people.”

And that, in a nutshell, is what the Tahoe Institute for Natural Science is all about.

“I encourage anyone interested in nature to go do a TINS tour,” adds Hockensmith. “We love to light that fire and show how captivating nature can be.”

For more information about the Tahoe Institute for Natural Science, visit tinsweb.org.

Kayla Anderson lives in North Lake Tahoe and loves to read, write and drink coffee. She also tries to get out on the water and watch the birds in her backyard as often as possible.