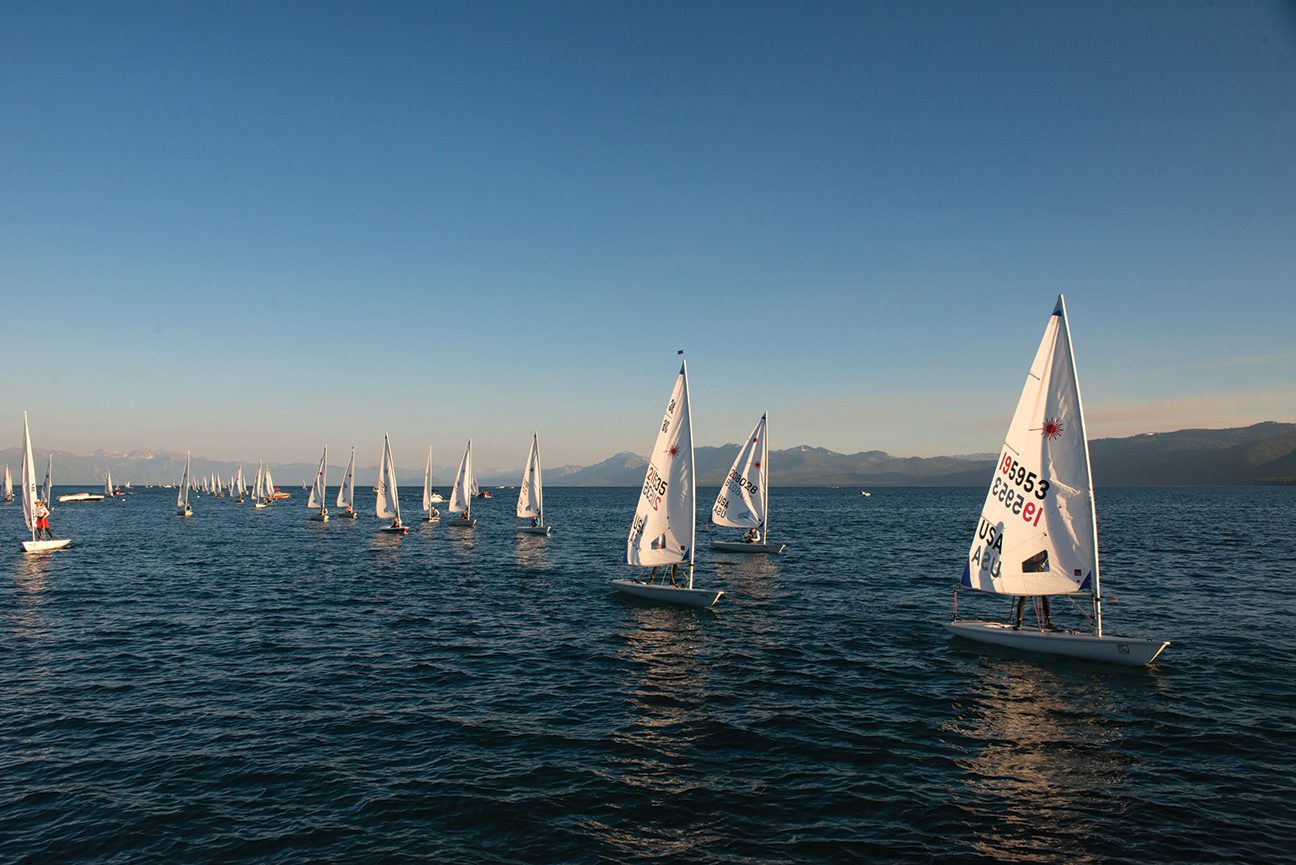 Sailors return to shore after racing in the 2017 U.S. Laser National Championship on Lake Tahoe, photo by Garry Moore

Sailors both novice and pro have long been attracted to North America’s largest alpine lake, where they are treated to a unique boating experience only Tahoe can provide

On a typical warm summer day at Tahoe, a stiff breeze kicks up in the mid-afternoon, sending wind-swept waves tumbling across the lake’s shimmering blue expanse. While such conditions may not be good for wakeboarders in search of glassy water, sailing aficionados are in heaven.

“Sailing on Tahoe is magical,” says longtime Truckee resident and lifelong sailor Buff Wendt, who identifies a few of the primary reasons why: Fresh water. No sharks. And, of course, unbeatable alpine scenery.

That’s not to say Tahoe is an ideal sailing lake across the board. Winds, although relatively reliable, are shifty. The water, while remarkably clear, is also dangerously cold. And lake access, unlike some other sailing destinations, can be challenging.

Nevertheless, there’s a reason world-class sailors travel from far and wide to test their skills each summer in the competitive Trans-Tahoe Regatta. There’s a reason locals participate once in the Tahoe Yacht Club’s weekly racing series and are hooked for life. And there’s a reason tourists line up to book sailing adventures, whether looking to learn the craft or simply kick back and relax with an experienced captain at the helm.

‘The Purest Form of Sailing’

Wendt has been enthusiastic about sailing ever since she first hopped aboard her dad’s small Sunfish dinghy on Lake Michigan at 5 years old. After spending much of her childhood on the water, Wendt taught sailing for a year off the Isle of Wight in England after graduating from college in 1988.

Her interest in Nordic skiing brought her to Truckee the following winter, and she never left after landing a job with a local engineering firm. 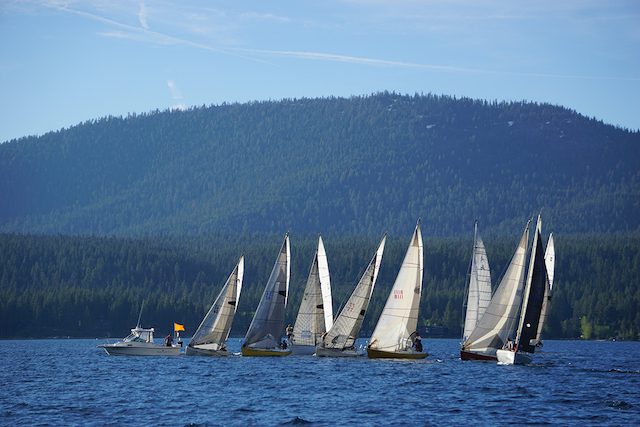 Wendt continued sailing that summer when she discovered an independent fleet of Laser dinghies racing off of Lake Forest on Tahoe’s North Shore. The race group eventually became affiliated with the Tahoe Yacht Club, which for years has hosted the Laser Regatta Series, held every Monday evening between Memorial Day and Labor Day.

As general manager of the Tahoe Yacht Club since 2015, Andrew Casci organizes volunteers to work member events and coordinate the Laser races. Everyone from novice teenagers all the way to Olympic-caliber sailors and seafarers in their 80s both participate and come out to watch.

“A lot of people keep their boats in Lake Forest,” Casci says. “And what’s nice about the Laser races is that parents come out and watch them from the dock.”

While Wendt has sailed all kinds of boats and participated in a variety of races over the years, Laser racing remains her favorite form of competition.

“These are fun, tippy boats that capsize easily, and can easily pop up on a plane in windy conditions,” she says. “All competitors have the same equipment, so the effort lies strictly in sailing talent and what you can do with the boat. I enjoy those races the most because it’s the purest form of sailing, and the most affordable.”

Races take place in the early evenings, and courses set by Tahoe Yacht Club race committee members are designed to be about 20 minutes long.

Casci, who grew up at Tahoe and has been sailing since age 10, says Lake Forest is a convenient area to anchor buoys into the water for a racecourse since the water depth is only about 50 feet.

Races begin by sailors getting a three-minute countdown to begin drifting toward the start line, with the goal of being in a strong position for maximum speed and clear air when the clock hits zero.

“Sometimes it is a bit of a gamble in Lake Forest with the shifts and the wind pressure,” Wendt says. “Sometimes you get stuck with no pressure on one side of the course, the dreaded ‘hole’ of no wind, only to see your lead dissipate quickly as it fills from the other side.”

Competitive sailing is a complex, rule-bound sport, though the number one rule is simple enough: Don’t hit another boat, even if you are in the right. In the Laser Regatta Series, breaking the golden rule costs sailors a penalty—they must complete a 360-degree turn before resuming, which Wendt says “can be very punitive in our tight fleets.”

“One simple 360 can lose you five to seven boat (lengths) in a race if everyone is close in position,” she says.

The Tahoe Yacht Club also hosts a Wednesday Night Beer Can Series from Lake Forest to Commons Beach in
Tahoe City with keelboats—essentially small recreational sailing yachts—that are just as competitive but have a variety of classes that draw in more people.

Additionally, there are longer-distance races and specialty events like the Trans-Tahoe Regatta, which the Tahoe Yacht Club has hosted since 1963, drawing sailors not just from the area, but from across the West Coast and beyond. 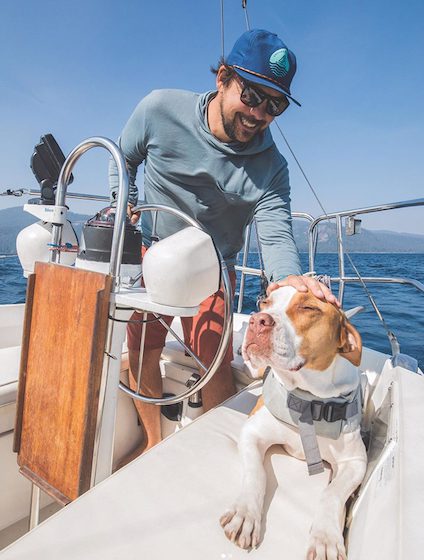 Whether Laser racers are competitive or not, they should have a certain level of skill to safely operate their boats and navigate at-times dangerous waters.

But for the most part, Tahoe is a welcoming lake both to youth and first-time sailors, particularly for those who receive expert help. Like captains Alex Blue and Brady Trautman, who teach sailing basics to people of all ages, from those who just want to dip their toes in the water to experienced adults who seek to sail around the globe.

And this couple certainly has experience. Over the past decade of life on the water, Trautman has traveled more than 75,000 nautical miles and visited 45 countries. Fittingly, he met Blue on a boat; she’s crossed the Atlantic three times herself, racking up 25,000-plus nautical miles in the process. When the pandemic hit, the couple moved to Tahoe permanently and now satisfy their sailing fix by running Cruisers Academy.

They teach sailing theory, weather forecasting, boat autonomy, safety and how to be a good crew member, among other lessons. Established in 2020, Cruisers Academy has three sailboats on the West Shore—two Catalina 22s and one Catalina 27—as well as a Passport 42 in the Bay Area.

While Blue lived at Tahoe before, Trautman had never resided in the mountains. The couple sailed on Lake Tahoe for the first time together in the summer of 2020.

“It turns out the sailing is awesome here,” Trautman says of the experience.

Trautman, who’s sailed all four oceans and has worked on vessels ranging from 48 to 150 feet, knows how to live on a boat long term. He says the duo’s original goal was to start an academy for cruisers interested in living the boat life. However, it quickly blossomed into something more, highlighted by the ability to provide instruction on how to navigate waters for shorter sailing trips and reading weather conditions to get the most fun out of sailing.

“From a sailing perspective, Lake Tahoe is great for learning. I always call this a tropical mountain paradise,” says Blue, adding that the afternoon southwest winds can also make for exciting conditions.

Those shifty mountain winds give even the most experienced sailors a challenge—and possibly an advantage over others in races as they learn how to deal with it, Wendt says.

“Tahoe’s a little tricky because there’s a lot of wind variations,” she says. “The mountains around us cause shadows and gusts that are fun. However, it can get fierce pretty quickly.”

Trautman and Blue say they don’t stress about the wind because they read weather forecasts ahead of time and teach those lessons to people wanting to sail on Tahoe.

“Sailing teaches you about life—how to be aware of yourself, your teammates, the people around you, how to be patient and work together as a team,” says Blue, who, like her partner, also holds a U.S. Coast Guard Captain’s License.

With the popularity of outdoor recreation at an all-time high—and crystalline alpine waters ever beckoning—it should come as no surprise that sailing is a rising sport on Lake Tahoe, with no signs of slowing.

“I love the fact that kids programs are so popular,” says Wendt. “I think sailing is great for everyone to learn to do. It’s a fantastic skill to have, and the programs are solid here in Truckee and Tahoe.”

To that end, Casci says the Tahoe Yacht Club not only promotes local youth sailing, it supports a team of juniors who go to the Bay Area and Santa Cruz to compete.

And while sailing races are exciting, Casci admits he prefers simply cruising on the water, in part because there’s no pressure to win.

Kayla Anderson lives in North Lake Tahoe and loves to read, write and drink coffee. She tries to get out on the water as much as possible, but the one time she sailed on Lake Tahoe, the wind died down and she felt like Chris Farley in that scene from Tommy Boy.