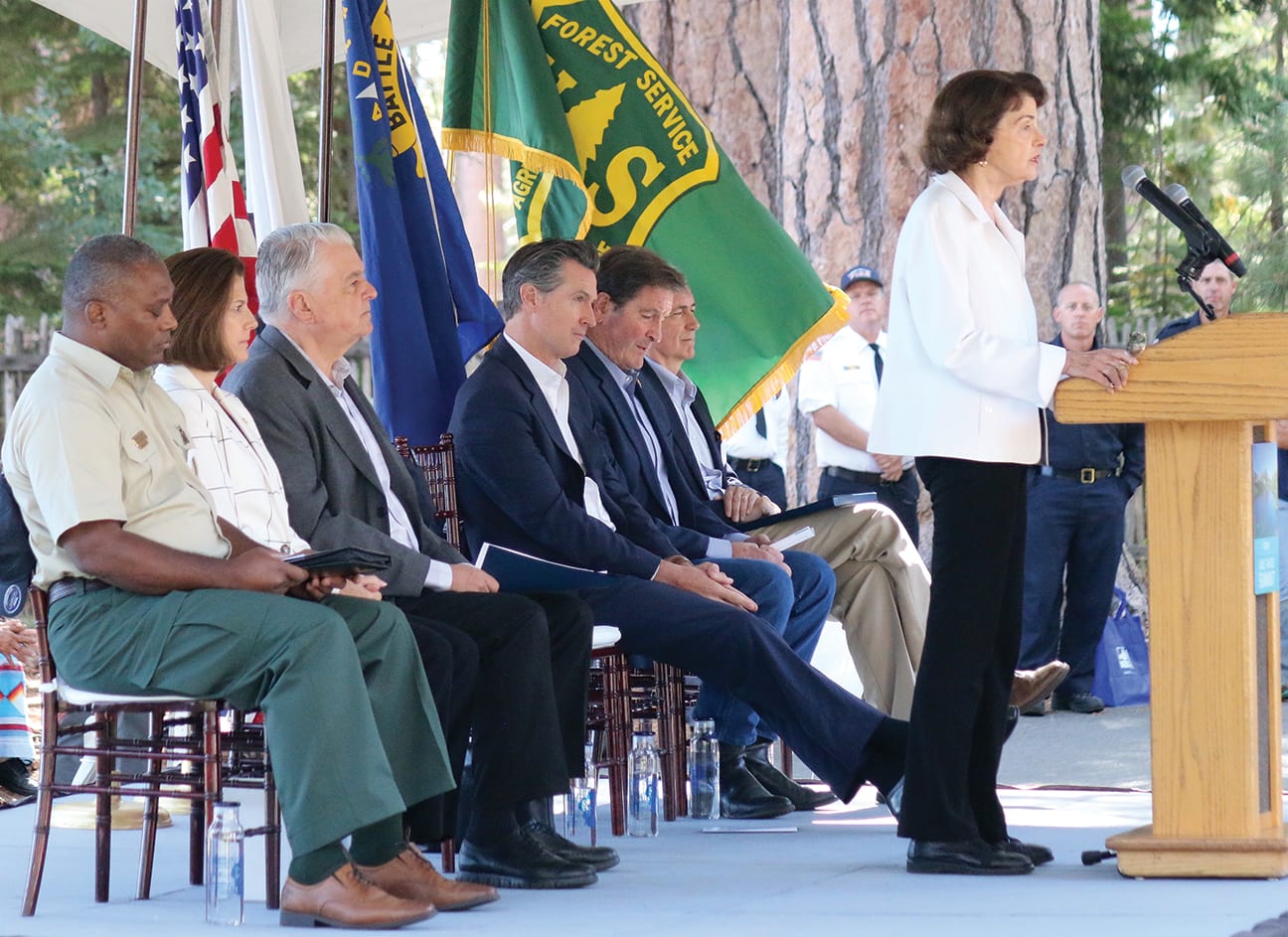 “There is no greater cause than keeping this lake clear, because really, it is a proxy for all of our larger efforts,” California Governor Gavin Newsom declared from the South Shore of Lake Tahoe.

The remark came near the end of a keynote speech delivered to an audience of a couple hundred people gathered on the lawn of Valhalla Tahoe as part of the 23rd annual Lake Tahoe Summit on August 20. 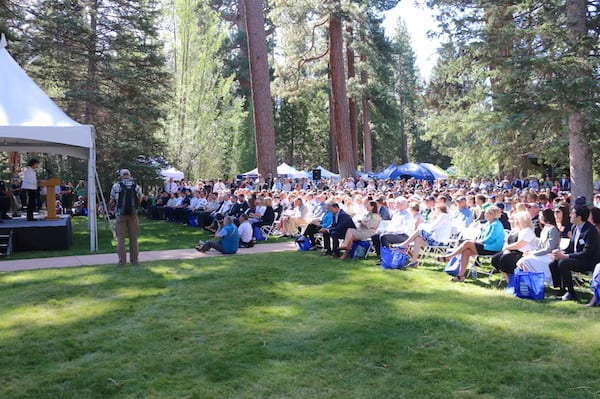 The audience gathered on the lawn of Valhalla Tahoe

The cobalt waters of Lake Tahoe spread out behind the roster of dignitaries assembled on stage. Steve Sisolak, Nevada’s Democratic governor, was among them, marking the first time since the inception of the Lake Tahoe Summit in 1997 that the highest office in both California and Nevada were both blue.

The congeniality between the two governors was evident, and each made the case that their growing rapport bodes well for collaboration on issues critical to the Tahoe Basin.

“It’s a lot easier when you’re pulling in the same direction as opposed to playing tug of war,” Sisolak told reporters after the summit adjourned.

One of the reasons collaboration is so critical to both officials—and, by extension, both states—is because the challenges at Lake Tahoe have changed dramatically since Bill Clinton and Al Gore hosted the first Lake Tahoe Summit in 1997, a point made by Nevada Senator Catherine Cortez Masto.

Cortez Masto said she looked back at the speeches given by both Clinton and Gore at the inaugural summit.

“They talked about the clarity of this gorgeous blue water, they mentioned the joy of recreation and tourism at Tahoe and the importance of restoring our forests and preventing wildfires, and they discussed the issues of transportation and development,” the senator said, hitting upon the major environmental issues that typify the salient concerns of Tahoe residents.

“But there is one thing that they barely touched on 23 years ago,” she continued, “and that was climate change.” 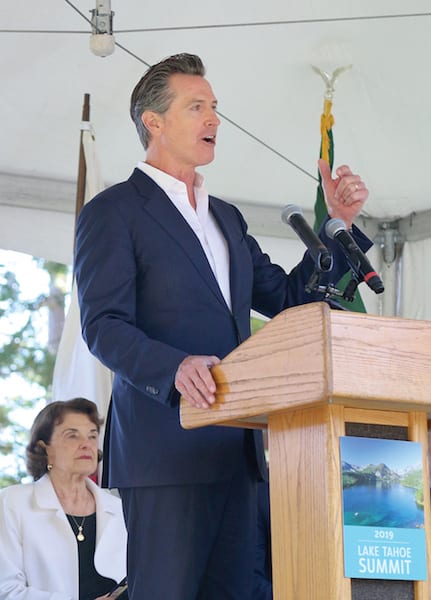 Clinton did mention climate change twice, but the concept was touched upon more in passing than given any type of central role.

But the subject of rising global temperatures and the ability of such global trends to despoil the Jewel of the Sierra was pervasive in the speeches of the state and federal representatives at the 2019 Summit.

Senator Dianne Feinstein, a longtime staple of the Summit who organized and hosted the 23rd annual event, touted the various accomplishments of the federal and state programs in Tahoe, including Best Management Practices—forest thinning, gathering fine sediment before it reaches the lake, boat inspections designed to stave off invasive species incursions, and the construction of hundreds of miles of bike and pedestrian trails around the lake.

“We’ve improved the lake’s clarity to 70.8 feet last year, so what we are doing as a bi-state, bi-partisan, public-private partnership is really working,” Feinstein said to applause.

But later in her speech, she admitted that the specter of climate change threatens to undo all of that work, and the nearly $2 billion spent by federal, state and local governments, as well as money from the private sector, will have been spent in futility if the rising temperatures are not sufficiently curtailed.

Tahoe is not only threatened by rising temperatures around the globe, but it functions as a thermometer both literally and figuratively, according to the speakers. 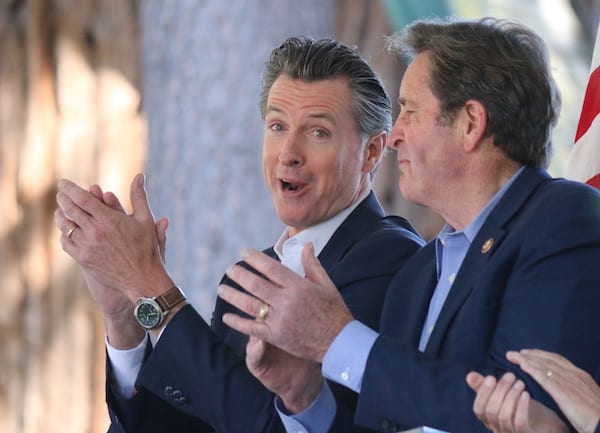 A warmer lake presents myriad problems that extend beyond the aesthetic issues of clarity. Warmer waters favor invasive species like large-mouthed bass and Eurasian watermilfoil, which present nuisance issues and outcompete the native species that have evolved to flourish in the perennially cold waters of North America’s largest alpine lake.

But figuratively, Lake Tahoe is a thermo­meter in that it illustrates the broader environmental threat presented by the inexorable rise of global temperatures. 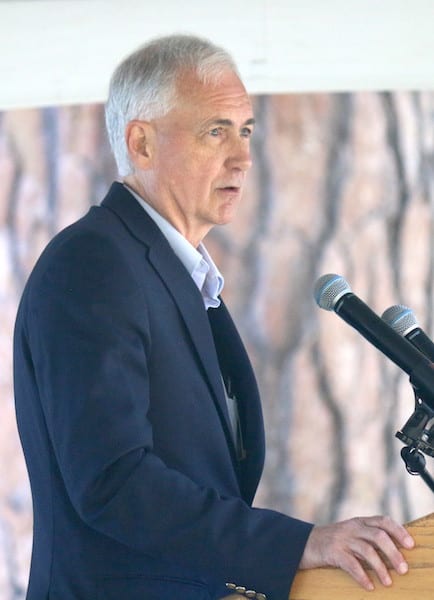 That’s what Newsom meant by calling Lake Tahoe the “proxy for all our larger efforts.”

“It’s a commitment to stewardship with a generational mindset, not a situational mindset,” Newsom told reporters as he stood shoulder-to-shoulder with Sisolak after his speech.

Moments before, he exhorted all those in attendance to take action in all the ways that met their given capabilities.

“It’s not just the lake’s clarity, but your clarity of conviction,” he said. “It is more important than ever that we stand up and step into this moment and assert ourselves at peril of being judged not to have lived.”

All the dignitaries in attendance talked of the future, of making sure the ensuing generations inherit the ability to marvel at the picturesque beauty of Lake Tahoe and its environs.

“We talk in generational terms,” Newsom said, before quoting a Greek philosopher on the importance of bequeathing things of value, not material things, to our children.

“If there is any hope for the future, those with the lanterns will pass them on.”