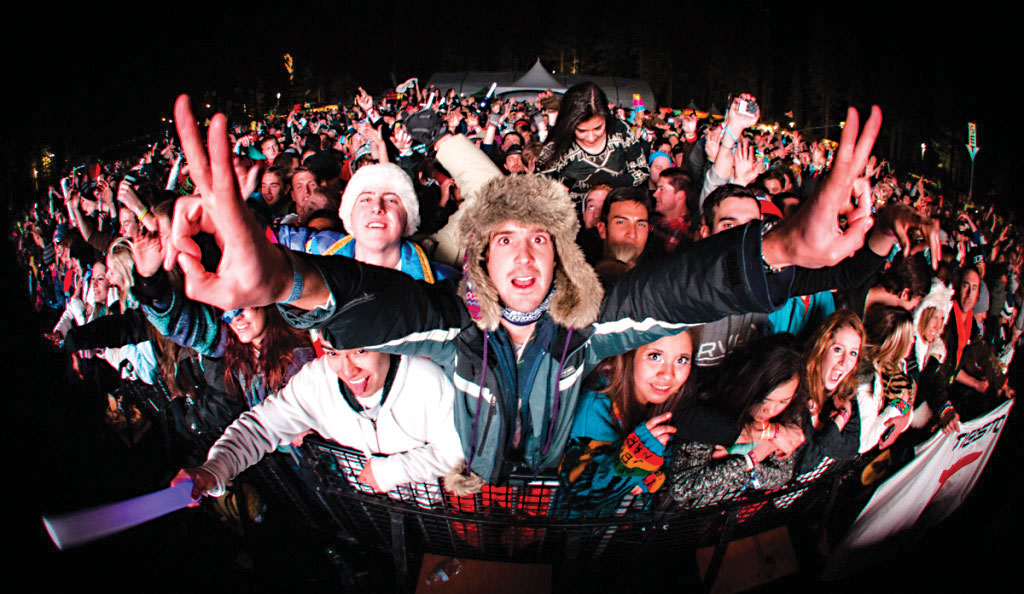 Chad Donnelly stands in the lobby of South Shore’s Lake Tahoe Community College (LTCC). As the students buzz around him, the 33-year-old patiently waits for his meeting to begin. Dressed casually in a blue patterned polo shirt, jeans and sandals, the founder of SnowGlobe, one of the largest winter music festivals in the United States, doesn’t necessarily look like a guy who wants to change the world. “I’ve spent a lot of time here,” Donnelly says with a smile. “I feel very much that when we come into town now, we’re widely supported. I remember city council meetings where I did not feel like that.”

Donnelly founded the three-day SnowGlobe Music Festival in 2011. Held on LTCC’s soccer field, the New Year’s Eve event attracts more than 12,000 electronic dance music fans from all over the country. Though it hasn’t been easy, the festival’s organizers have refined its operation and look forward to a long-term stay on the South Shore.

In March, the South Lake Tahoe City Council signed a multiyear contract with the event. Councilmembers pledged more than $70,000 of support in cash and services to help the production.

“It’s basically been four years in the making,” Donnelly says. “It’s nice to see we finally have the trust of the community. Not to say we didn’t have the trust before, but an event that is of such a large scale really needs to have buy-in and support from all the different parties.”

Before SnowGlobe, New Year’s Eve in South Lake Tahoe was kind of puzzling. Near midnight, thousands of revelers gathered on U.S. Highway 50 between the casinos. In some years, the wandering crowd stretched out for a mile, boozing, smoking, abusing the local Pony Express statue and generally making trouble.

“In short, thousands of people used to show up near the casinos and revel in the moment,” says South Lake Tahoe police chief Brian Uhler. “They closed down Highway 50, made noise, threw snow or ice, and climbed the traffic signal.”

As soon as it was presented, SnowGlobe was viewed as an opportunity to change the rowdy scene.

“When I put the concept in front of the city council, they saw the opportunity to redirect some of those folks that were out there in a very unstructured environment and give them something to do,” Donnelly says. “South Lake Tahoe is the ultimate destination for NYE and having something to do makes it that much more appealing.”

When SnowGlobe Music Festival was announced in 2011, some residents wondered what took so long for the city to host an official New Year’s Eve event that could accommodate the huge crowd. Others barely took notice. It wasn’t until the beat dropped out of the wall of 10,000-watt speakers that the town realized the magnitude of the winter festival.

“I didn’t know what to expect,” says long-time city councilman Tom Davis, who counts Barbara Streisand among his musical interests and voted to approve the multiyear contract in March. “I really didn’t. I don’t think I would use the word surprised. I was impressed.”

Thousands of fans—sporting furry headwear and glow sticks—streamed into South Lake Tahoe. Even though the snow was absent, lodging reservations were up. Businesses were busy. And the music pumped.

“I live out in Meyers, and I could hear it that first year,” says Brian Cohen, owner of Overland Meat and Seafood. “I said, ‘What is that? Oh my god, it’s SnowGlobe.’”

But it wasn’t long before the city knew it had a problem. Noise complaints clogged the police department’s phone lines. The bass could be heard across town. Some residents said it had shaken hangings from their walls.

“The sound level varies throughout the days and with the performers,” says South Lake Tahoe resident John Spinola, who lives close to the college venue. “Sometimes the noise level is bearable. Other times, the pictures on our walls vibrate.”

Without a doubt, the first year caught everyone a little off guard. The economic impact of the event was measured at more than $6 million in lodging and expenditures. Fans were elated. Business owners were smiling.

“We’re pumping the town with an extra 10,000 people who are dropping money to my customers,” Cohen says. “They’re going to come in here a week or two weeks later and spend it. To me, it was a no brainer.”

But many residents and vacationers were not happy about the noise and the traffic. Letters of protest flowed in to local news outlets. One letter read, “Whoever decided to host the SnowGlobe concert should have their head examined.”

Supporters of the event quickly jumped in. The argument polarized the town and both sides could be heard at city council meetings, LTCC board meetings and in the media.

As the second year of the event rolled around, the city reworked the special event guidelines and instituted a noise control ordinance. Festival organizers changed the layout of the stages. A thick blanket of sound-insulating snow fell on the venue—a much welcomed change of atmosphere over the first year. The noise complaints decreased significantly.

Another welcome facet of the event was the dwindling crowd at Stateline. Since SnowGlobe began, arrests over the days surrounding New Year’s Eve—typically one of the busiest times for area police—have decreased significantly, Uhler says.

Yet, while the event’s second year seemingly went smoothly, SnowGlobe faced its toughest and most tragic challenge just days into 2013.

Petaluma, California, resident Alyssa Byrne came to South Lake Tahoe for SnowGlobe’s second year. The 19-year-old and three friends booked a hotel room at Stateline for the three-day holiday. The first two days of the festival went well for the group. Then came the final night, New Year’s Eve.

Her friend Jay Donnellan told the television news station KTVU that they had been together almost the entire day before they were separated toward the end of the festival. Byrne called Donnellan and told him she was returning to the hotel room on the shuttle bus around 11 p.m., he said. The group of friends reported Byrne missing the next day.

Though the weather was brutal, family, friends, the police and the FBI mounted a massive search for the teenager. Temperatures ranged from -4 degrees Fahrenheit to 44 degrees. Snow from a recent storm was piled throughout town.

On the morning of January 4, two utility workers spotted Byrne’s body behind a snow bank between Al Tahoe Boulevard and Black Bart Avenue. In yoga pants and snow boots, but without a jacket, she had walked in the opposite direction of her hotel from the festival. The official cause of death was not determined, though the coroner cited hypothermia and the presence of methamphetamine in her blood.

Alyssa Byrne’s death revived the debate over SnowGlobe. Some blamed organizers for the tragedy. One open letter argued that the accident illustrated a major lack of foresight.

When asked about Byrne, Donnelly’s eyes immediately glaze. He’s been asked by his legal team not to comment on her death, he says. But it’s clear the accident had an impact on him.

“We are very committed to keeping our fans safe,” Donnelly says. “We work around the clock to improve every aspect of the festival and certainly safety is at the top of that list.”

The following year, SnowGlobe supported Always Buddy, a campaign founded by Byrne’s parents, Kim and Kevin. The program encourages festivalgoers to buddy up and look after each other. So far it’s gathered nearly 6,000 likes on Facebook and hosted several fundraising events.

Now heading towards its fourth year, SnowGlobe has a dedicated following. Fans are eagerly anticipating this year’s lineup of electronica, hip hop and indie, including Skrillex, Flume and a host of other acts.

With the contract agreed upon nine months ahead of the event, the setup and organization should be easier than in past years, Donnelly says. Of course, everybody is hoping there’s snow, but the festival has made it through without.

Still, SnowGlobe has some hurdles ahead. The artificial turf field where the event is held needs to be replaced soon. City officials have estimated the cost at more than $500,000.

When that happens, the music festival will have to find a new home outside of LTCC.

“Inevitably, there will be changes,” Donnelly says. “If things change with the field, there are already some options we’ve discussed.”

In the past three years, the event has come a long way. When fans wave signs shaped like giant turnips and wear rainbow fur leggings and dance like the end of Earth is near, it’s not hard to see that SnowGlobe has snowballed. The event carries momentum that would be hard to stop, regardless of the barrier.

Though the organizers bring the music and the stage, the fans make the festival what it is, Donnelly says. He’s grateful to the community for accepting the event and his team for working hard to produce it. Despite the challenges they’ve faced, he says he hopes SnowGlobe makes the world a better place.

“Seeing the fans coming through the gates and seeing them hugging and dancing and having the time of their lives leaves an imprint,” he says. “It’s something you can never take away.”