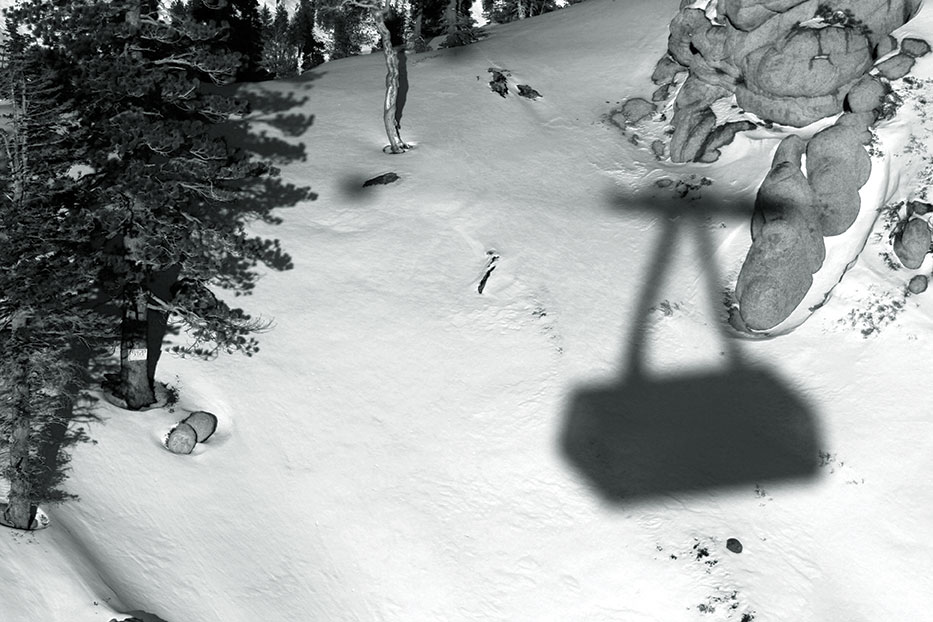 It was 3:45 p.m. on April 15, 1978, when a particularly muscular Sierra blizzard struck Squaw Valley ski resort. The red tram, filled with 44 occupants, was heading steadily toward the base of the mountain when an unknown event caused it to dislodge from its support cables. Unmoored from the outside cable of the two-cable support system, the cart plummeted toward the ground nearly 100 feet below.

The car fell 75 feet before the remaining cable tightened and bounced the terrified passengers back up toward the snowy skies like a yo-yo.

Meanwhile, the outside cable, relieved of its load, jumped over top of Tower 2, came loose of its moorings and crashed toward the ground when it collided violently with the car, slicing the metal like a sharp cleaver through ripe fruit.

The 17-ton cable pinned 12 passengers to the car’s floor, the enormous force killing three men instantly. The wives of those three men were also in the car. While one of them struggled at her dead husband’s side as the industrial-sized wire pressed her skis into her chest, another grew increasingly hysterical, screaming for her husband in the car, according to published reports.

One man, David Penning, was flung headlong from the gashed cable car. Penning merely suffered a broken rib and walked away from the scene. He was the first person to escape the accident—a tragedy that would eventually result in four deaths, multiple injuries of varying severity and inflicting trauma on everyone involved.

On that Saturday, Squaw Valley Patrol Director Jim Mott was in his office reviewing accidents typical for a spring day at Squaw when he received a call regarding the red car of the Squaw Valley tram.

The extent of the accident wasn’t immediately apparent. Mott returned to his work and continued daydreaming about the imminent closure of the ski resort, as he was headed to warmer latitudes to enjoy the off-season in the sun, he would later tell reporters.

However, it wasn’t long before the radio dispatches painted an increasingly desperate picture.

Dan Gutowsky, a 25-year-old Squaw Valley employee from Marin County, was the red car operator that day. Soon after the car came to rest, Gutowsky reported via radio that at least two passengers were dead and the car was littered with men, women and children groaning as well as ski equipment, shrapnel and assorted debris.

Veteran ski patrolman Chris Phillips was the first responder to arrive at the scene. He and Gutowsky agreed to deploy the attached escape cable immediately, but the men soon discovered the winch that was a principle part of the apparatus had been irreparably damaged during the accident. However, the cable itself was still intact. Gutowsky lowered the cable to Phillips, who attached a nylon climbing rope to the cable, which Gutowsky then gathered back up into the dangling car.

Phillips tied the other end of the rope around himself and hunkered down as Gutowsky and two uninjured passengers pulled hand over hand until they had the patrolman on board.

Soon thereafter, Mott arrived on the scene and followed suit. After being hoisted into the car, Mott assessed the disaster, noting the various injuries, the dead, the uninjured, the calm and hysterical. He called for maintenance and a doctor as the blizzard intensified, the wind growing sharper and more insistent as the overcast sky darkened and temperatures dropped precipitously.

The rescue’s conditions were a worst-case scenario, Mott would later tell reporters.

The occupants who had elected to take the last tram down the mountain had done so for a variety of reasons—some wanted to reach their cars quicker to drive back to the Bay Area, some did not want to ski in the hazardous conditions and some weren’t skiers but tourists who wanted a good view, including seven who had spent the day at a High Camp bar birthday party.

Mott and Phillips distributed blankets to warm the living and cover the dead. Unable to lift the enormously heavy cable that continued to trap nine survivors, including a six-year-old girl, the two men administered what medical aid they could muster.

Later, Dr. Charles Kellermyer was hoisted up to cable car to provide medical care. He attempted to provide IV fluid to 20-year-old Gina Wisniewski, the most badly injured of the survivors, but the cold temperatures caused the fluid to freeze.

With the help of famed mountaineers Jim Bridwell, Rich Sylvester and Malcolm Jolly, the patrolmen established a complex system of ropes and climbing belays capable of extracting the survivors and safely lowering them to the ground.

Jon Krauss, a maintenance worker with the expertise necessary to move the cable off of those who remained pinned, answered the call and climbed the ladder at Tower 2. Using a safety sling, Krauss shimmied over and descended nearly 75 feet to enter through the damaged car’s roof.

Krauss helped with the belay system before turning his attention to removing the 17-ton cable off the dead and injured.

Approximately one hour and 40 minutes after the accident, the first passenger was lowered to safety and whisked away to the Gold Coast mid-mountain lodge, which was transformed into a makeshift field hospital.

While the emergency responders were aware proper triage dictated they remove the most injured people first, the weight of the cable made the feat nearly impossible and so they turned their attention to removing those unfettered by the cable.

Mott, Phillips, Krauss, Gutowsky and Kellermyer operated with a gnawing knowledge that the car could fall at anytime and turn the rescue mission into an utter disaster. Speed mattered.

In the meantime, the entire Squaw Valley community mobilized, as more than 200 volunteers—ski patrol, regular employees, doctors, nurses, town residents and tourists—provided some sort of assistance, ranging from operating the snowmobiles and cats conveying the injured to nearby first-aid stations, to bringing food and water for rescue workers, to building a huge bonfire at the site of the crash to keep the responders warm.

Survivors were transferred from Gold Country down to the hospital at the bottom of Squaw Valley via the gondola, which continued to operate despite high-velocity wind, and then onto one of two area hospitals, Tahoe/Truckee Medical Center 12 miles away and Washoe Medical Center in Reno, which was 45 miles away.

As the evacuation of the red car proceeded steadily and carefully, Mott and Phillips turned their attention to lifting the cable off the injured with a small portable winch that had been lofted up to the car via the pulley system.

The winch was only able to bear the weight of seven tons; it managed to lift the cable about a half-inch off the trapped occupants, but the minimal distance was enough for some people to remove their ski boots and escape the clutches of the trap with little more than bruises on their shins.

For Wisniewski, whose husband, Dean, had died in the initial crash, the margin was insufficient. She remained trapped a full seven hours before the rescue workers, who had been strenuously working in the bitter cold for five hours straight, were able to extract her and another woman who had suffered a fractured leg. Wisniewski was lowered via a stretcher to Ken Spencer, a 22-year-old ski instructor who held on to her as they raced furiously to the field hospital. She died en route.

Mott, Phillips, Krauss, Kellermyer and Gutowsky were the only ones on board left alive.  After removing the dead bodies from the scene and lowering them to the ground, the men filed one-by-one from the scene of devastation.

Mott later told reporters that the climbing rope by which he escaped was so frayed that he was unsure whether it would snap before he reached terra firma. It didn’t. Mott touched down at just before 1 a.m., approximately nine hours after the accident.

The exact cause of the Squaw Valley tram accident remains a mystery. Obvious factors such as high wind velocity, which caused the car to sway significantly, likely contributed, but investigators with Placer County District Attorney’s Office and Cal-OSHA declared the event an “act of God.”

Squaw Valley owner Alex Cushing enlisted Dr. Karl Bittner, a world-renowned expert on tram design, to investigate the accident. Bittner was unable to determine a cause of the accident but offered suggestions to make the contraption safer in the future.

A new car was installed in December 1978—nearly eight months after the tragedy—and the first run occurred in January of the following year, with hundreds of undaunted skiers pouring into the car.

In 1998, Squaw Valley upgraded its cable car system and has maintained a sterling safety record since.

Editor’s Note: The author consulted an array of sources in writing this article, but he is particularly indebted to the accounts of the accident written by Dick Dorworth for Ski Magazine and the late Robert Frohlich for Moonshine Ink.