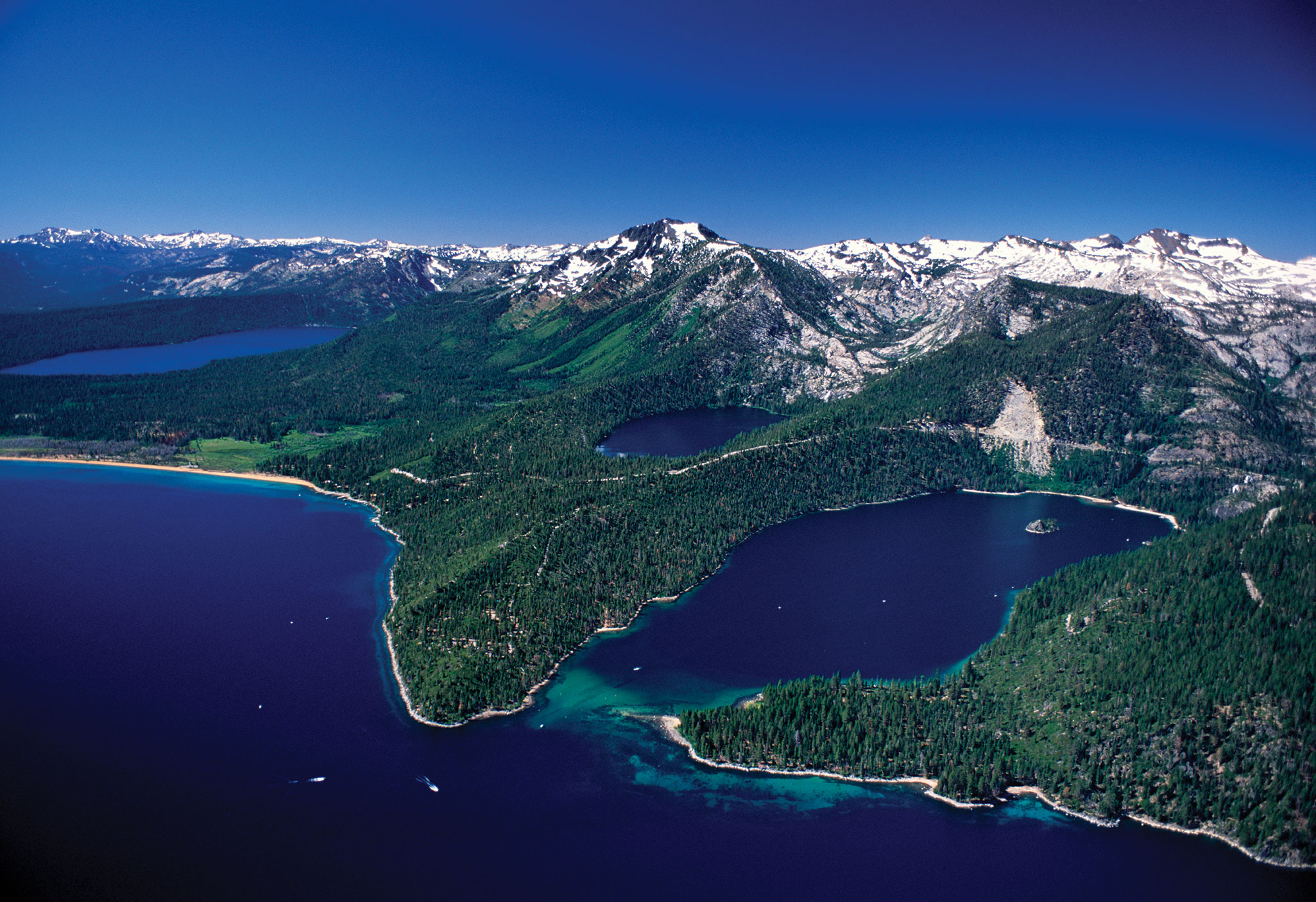 Lake Tahoe and the surrounding mountains, streams, meadows and cliffs offer a fascinating glimpse of geologic history. It is a story begun in the time of dinosaurs, morphed by plate tectonics and sculpted by volcanoes and glaciers.

Research continues re-writing that story even today, and the region’s future is still very much up for debate. Many commonly held beliefs on Tahoe’s formation have been proven untrue, and some of the most powerful forces at work aren’t common knowledge.

Change is measured in hundreds, thousands or millions of years, but opportunity for significant geologic events impacting those who live at and visit Lake Tahoe is very real today.

In the Time of Dinosaurs 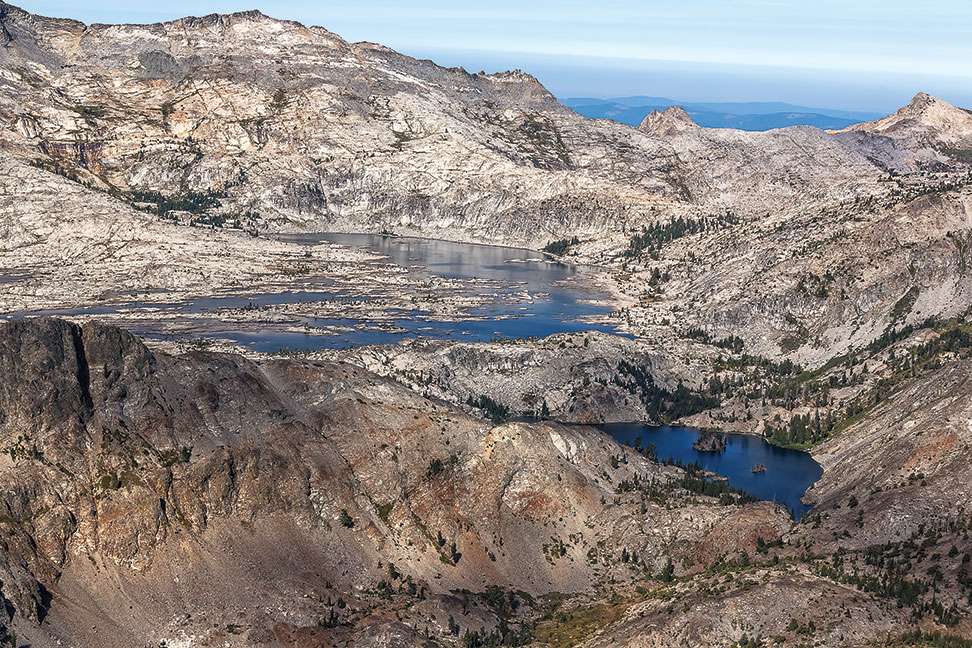 Worn down by weather for millions of years, the exposed Sierra Nevada Batholith creates spectacular granitic
formations in places like Desolation Wilderness, photo by  Wendy Hudnall

One hundred million years ago, all the materials that would become the Lake Tahoe Basin and surrounding mountains, valleys and formations sat unassuming at the bottom of a vast inland sea in a subduction zone, like those you’d find off the coast of Chile, Japan or Washington state, says Tahoe native Dr. Graham Kent, director of University of Nevada, Reno’s Nevada Seismological Lab.

That sediment and a series of volcanoes sat on top of a massive magma chamber that would form the Sierra Nevada Batholith. Eventually, the batholith rose up from underneath the volcanoes and sediment, exposing the granite rock for which the Sierra Nevada is now famous in places like Yosemite, Desolation Wilderness and Donner Summit.

“All of those sediments on that trench and all that magma make up the tapestry of Lake Tahoe,” Kent says. “It’s pretty stunning; as you drive down the Sierra Nevada, you’re looking up at 100 million years of earth history. You can find ammonite fossils from the time of dinosaurs on Mt. Tallac.”

The Sierra Nevada as it appears today began taking shape when plate tectonics thrust it skyward 20 million years ago, when Earth’s crust to the east began to stretch in what is known as the Basin and Range Shear Zone, says Jim Howle, a structural geologist with the United States Geological Survey Truckee office.

That process continues today, driven by the San Andreas Fault to the west and the Walker Lane to the east, driving the Sierra Nevada Microplate northwest at a rate of 14 millimeters per year relative to the land around it.

That kind of plate movement is never clean and is almost always violent. In the case of the Sierra Nevada, it left the mountains riddled with both north-south and east-west oriented seismic faults, Howle says. 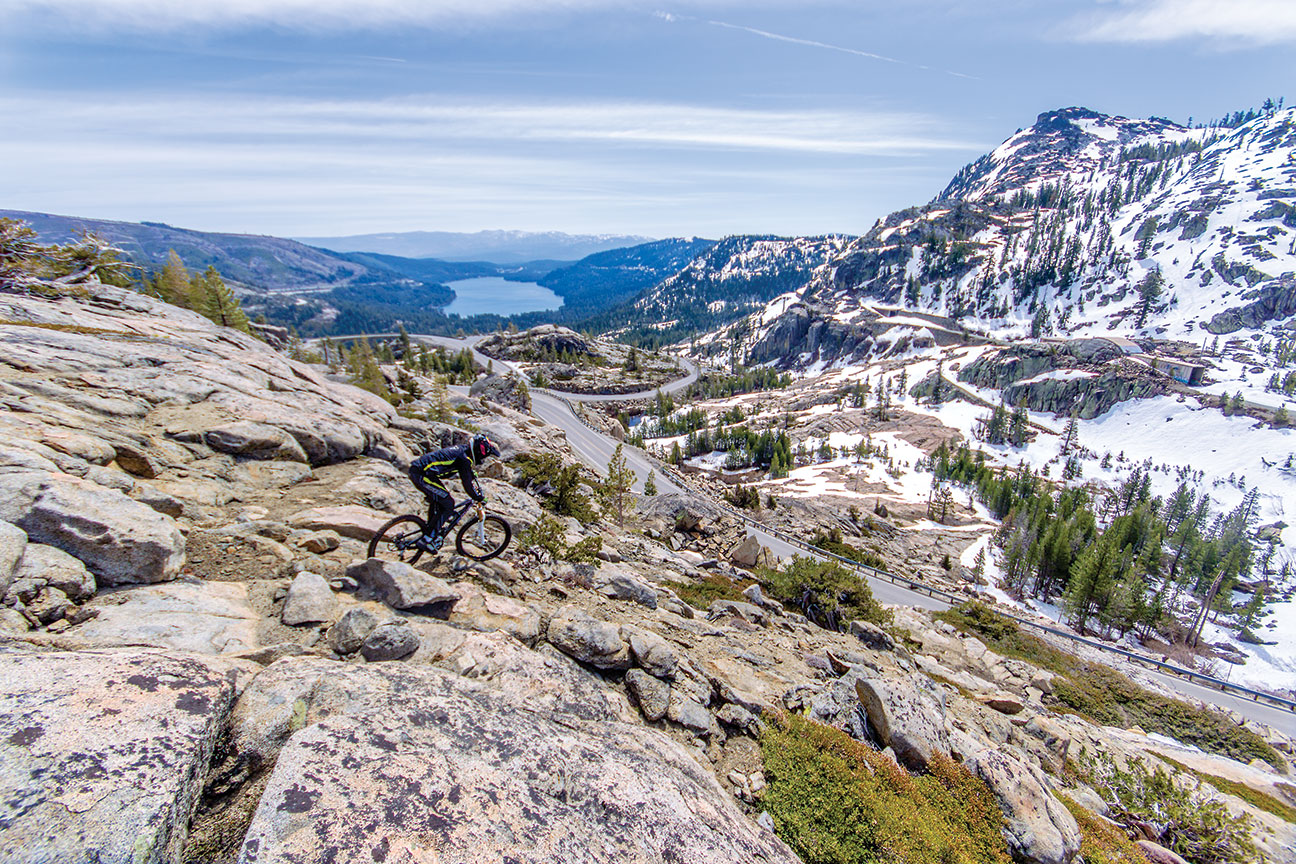 Donner Summit’s fascinating topography, which makes it a wonderful biking and hiking destination, may have
been formed by flowing lava; rider is Mikey Sylvestri, photo by Pat Branch

The common explanation for Tahoe begins with a valley, blocked some 2 million years ago by volcanic Mt. Pluto (now Northstar California), eventually filling with water.

This is completely false, says Dr. Winnie Kortemeier, a professor of geosciences at Western Nevada College, who did her PhD dissertation on young volcanic rocks in Northwest Tahoe.

“This story is everywhere, but Mt. Pluto is not a volcano, nor is Mt. Watson; they’re made up of volcanic rock that’s been uplifted,” Kortemeier says. “I’ve argon dated the volcanic rock in the Truckee River Canyon and it’s older than the Tahoe Basin—about 4 million years old.”

Howle agrees, saying the volcanic rock found from Mt. Pluto to Mt. Rose along Tahoe’s northern rim all ranges from 4 to 8 million years old, and can’t be responsible for damming a valley to form Lake Tahoe.

“The idea of a valley dammed by a volcano is out the window now,” Howle says, citing Kortemeier’s research. “Here you have a Basin that’s caught every single piece of sediment that’s fallen into it for the last 3.5 million years with no way to remove it, yet it’s deeper than the Carson Valley that has a river to remove sediment. The bottom is falling out of this Basin.”

When the bottom had just begun to fall out of Lake Tahoe, a small, warm and shallow lake formed in the northwest part of the Basin, Kortemeier says. This is supported by the soft, porous diatomaceous earth—made up from the fossil remains of microscopic creatures called diatoms that lived in the warm, shallow waters—forming the Tahoe City shelf.

“If you go to Skylandia Beach and walk west in the park there is an outcropping that’s pure white,” she says. “Diatoms have silica shells that create that.” 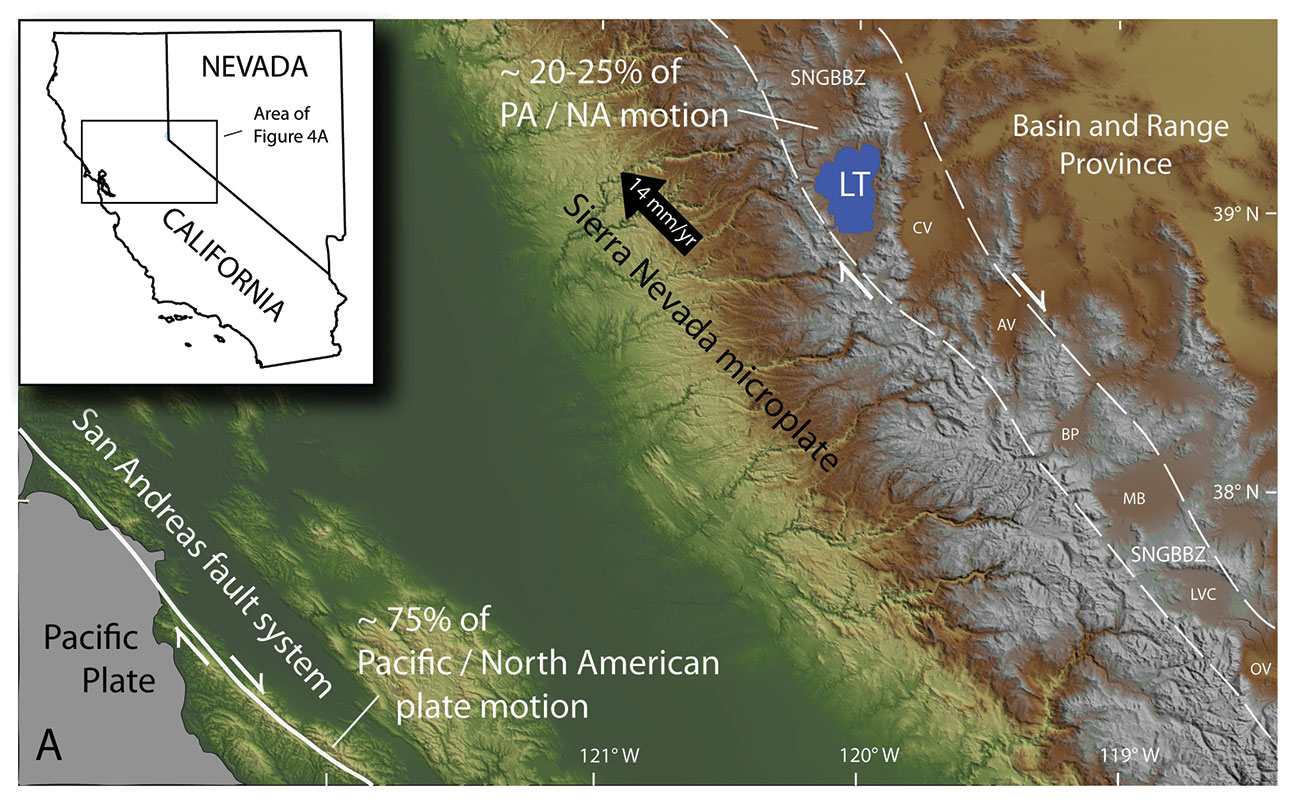 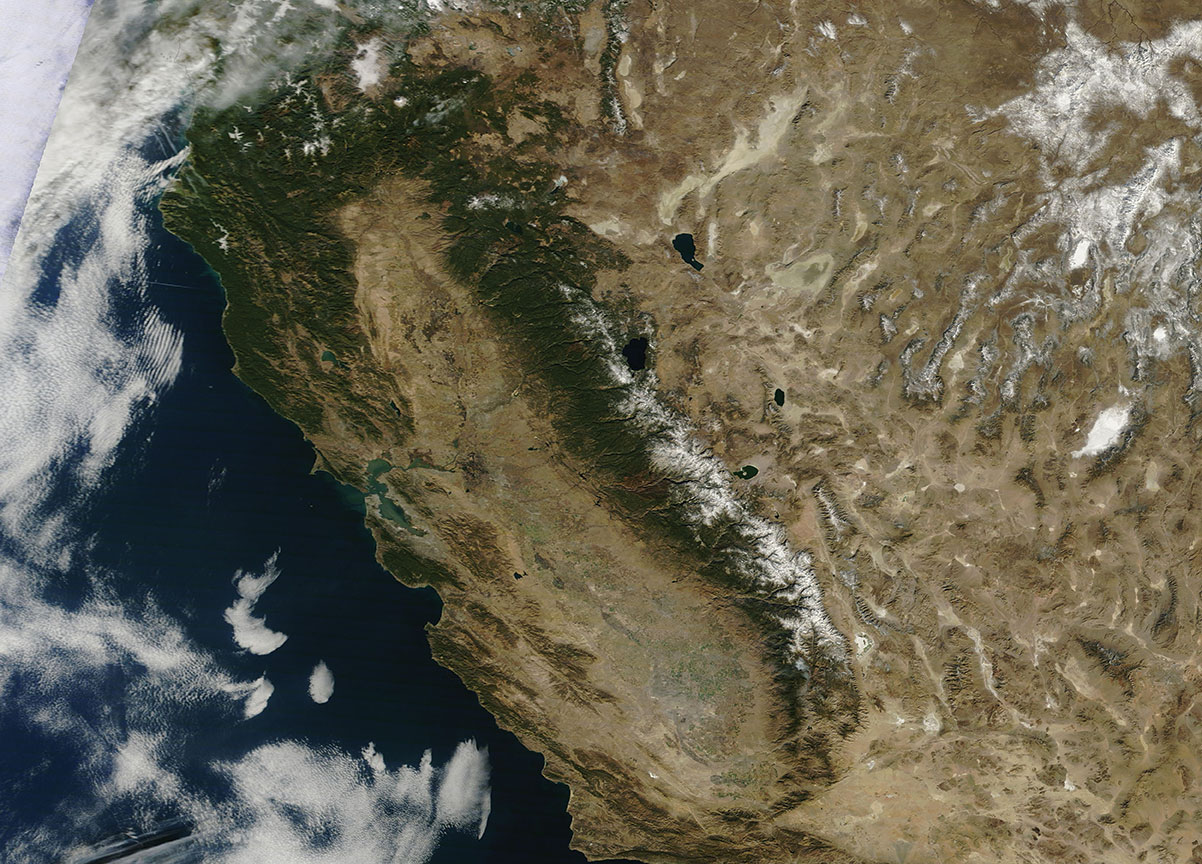 The Walker Lane runs along the Eastern Sierra, and may one day split to draw the Gulf of California right into
the Tahoe region, satellite image courtesy NASA’s Earth Observatory

“The Walker Lane is responsible for the modern Sierra Nevada,” Kent says.

The Walker Lane Geologic Province runs from the Sea of Cortez north through Death Valley, the Owens Valley, up the U.S. Highway 395 corridor, but then becomes a little fuzzy around Lake Tahoe.

This is because it’s a zone of unconsolidated faults some 60 miles wide that could one day come together as one big fault like San Andreas. And like San Andreas, it would be a right-lateral shear fault—look across the fault and the ground opposite would be moving to the right—leading some, including Kent, to believe it could take over the seismic role of California’s famous fault.

“It’s like a piece of paper ripping, growing toward Oregon every year, and it’s been growing for a long time,” Kent says. “It’s why the Sierra Buttes are not as tall as the peaks of Tahoe, and why the peaks of Tahoe aren’t as high as Mt. Whitney. The south has seen more shear. Death Valley is already below sea level.”

But Kent, Howle and Kortemeier all have different ideas on where this fault would propagate as it comes north from Owens Valley.

“At some point, maybe in 5 to 8 million years, all of these valleys on the east side [of the Sierra] are going to connect, moving the Gulf of California into the Eastern Sierra,” Kent says. “You’ll be able to go fishing where Carson used to be.”

While Kent sees the Walker Lane coming up through the Carson Valley, Kortemeier thinks it’s farther east, between Walker Lake and Pyramid Lake. But for Howle, it’s coming right through Lake Tahoe.

Howle co-discovered the Polaris Fault, a 22-mile-long fault running from Northstar north to Kyburz Flat through the Martis Valley. It’s capable of magnitude 7 earthquakes, and he thinks that’s the logical path for the Walker Lane.

Other small ranges to the east like the Walker Range and the Pine Nuts have already peeled off the backside of the Sierra as a result of the Walker Lane, and the Carson Range (Tahoe’s eastern rim) is a logical next step in that process, he says.

“The Mohawk Valley Fault [Plumas and Sierra counties] and the Polaris Fault may already be connected, and will most certainly be a major player in the formation of the Walker Lane,” Howle says.

Before looking too far into the hazy geologic future, it’s worth looking at some of the other forces that have shaped Lake Tahoe. 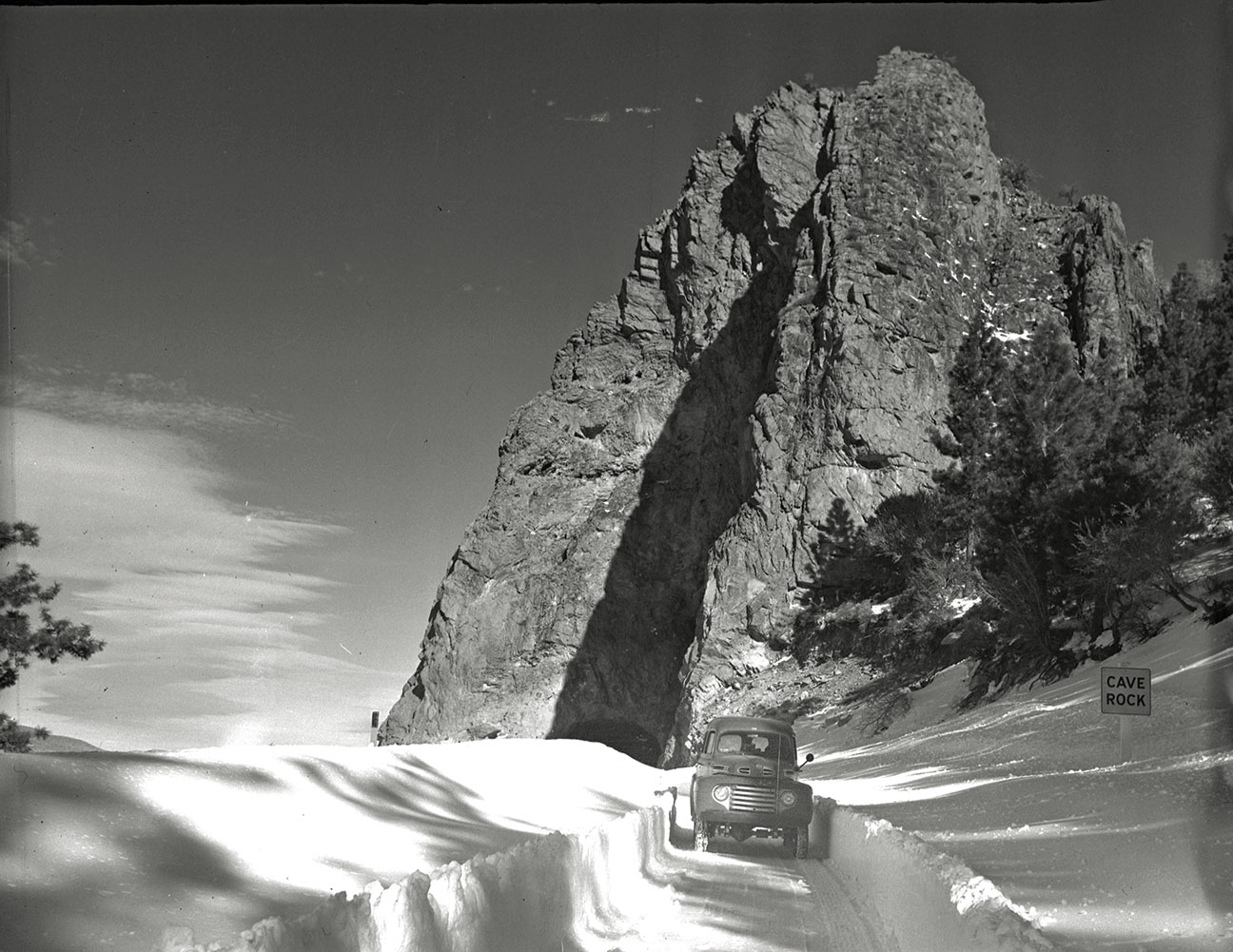 While the Cascades to the north are known for volcanism, and Yosemite to the south is famous for glacial sculpting, forces of both fire and ice played critical roles in shaping the Tahoe region’s modern landscape.

“When you shove a big plate under the Western U.S. and Lake Tahoe, whenever you extend the crust, it decompresses the mantle below a little bit, and it’s like opening up a soda bottle,” Kent says. “These weren’t big volcanic events, but they formed things like Cave Rock, Chimney Rock, Eagle Rock and more.”

Geologists have been able to reconstruct older volcanic formations to their peak heights, looking back over 5 million years to a Squaw peak towering 16,000 feet in elevation, Martis Peak reaching over 12,000 feet and Mt. Pluto standing at around 11,000 feet, Howle says.

“In the last 750,000 years, there have been nine different glaciations, which accounts for most of the erosion on those tall peaks,” he says.

Two glacial events—the Young Tahoe about 70,000 years ago and the Tioga about 21,000 years ago—have been the subject of extensive study at Lake Tahoe, Howle says.

Glaciers built heavily on the western slope of the Sierra, getting so big as to overtop the crest, Howle says.

Both the Young Tahoe and the Tioga also transported granite far from the west to Tahoe’s shore, the former’s deposits being recognizably rounder with age and the latter’s deposits more jagged with relative youth, Howle says.

And the transport of those rocks has shed new light on old geologic theories.

Tahoe’s first geologist, Waldemar Lindgren, came to the area in 1897 and developed a theory that the glacier flowing out of Squaw Valley dammed the Truckee River, and that dam broke, flooding what is Truckee today in a massive wall of water.

But Howle says he and other geologists have found that Lake Tahoe was actually lower during the glacial periods. They tracked glacial moraines—deposits of rocks on the edge of the glacier—down below modern lake level.

Instead, the evidence for the dam break and resulting flood were likely from a moraine dam of rock and earth the receding glacier left behind, breached by an earthquake, he says, which deposited granite boulders traceable to Squaw Valley throughout Truckee.

The Lake had risen 98 feet above modern levels, unleashing 3 million cubic feet of water per second downstream when the dam broke, lasting for two days.

But glaciers aren’t the only things that have dammed Lake Tahoe.

Kortemeier specializes in more recent volcanic activity at Lake Tahoe, charting events recently enough (in geologic terms) to keep the northwestern region of The Lake out of the volcanically-extinct category even today.

None of these likely resulted in a dam-break scenario, instead eroding gradually and returning to modern elevations, she says.

The cinder cones were hard to identify. One, located on Thunder Cliffs across the Truckee River from the entrance to Alpine Meadows, was bulldozed and used in a failed attempt to treat Tahoe City sewage in the 1970s, Kortemeier says.

“There could still be another small eruption in the region—nothing like Mount St. Helens, but more like Paricutin Mexico, where a volcano just appeared in a farmer’s field in the 1940s,” Kortemeier says. “In 2003 there was a swarm of small earthquakes under Carnelian Bay, and the signature of those earthquakes was at magma depths.”

Greyson Howard is a Truckee-based writer who frequents the Eastern Sierra’s high peaks in the summer.