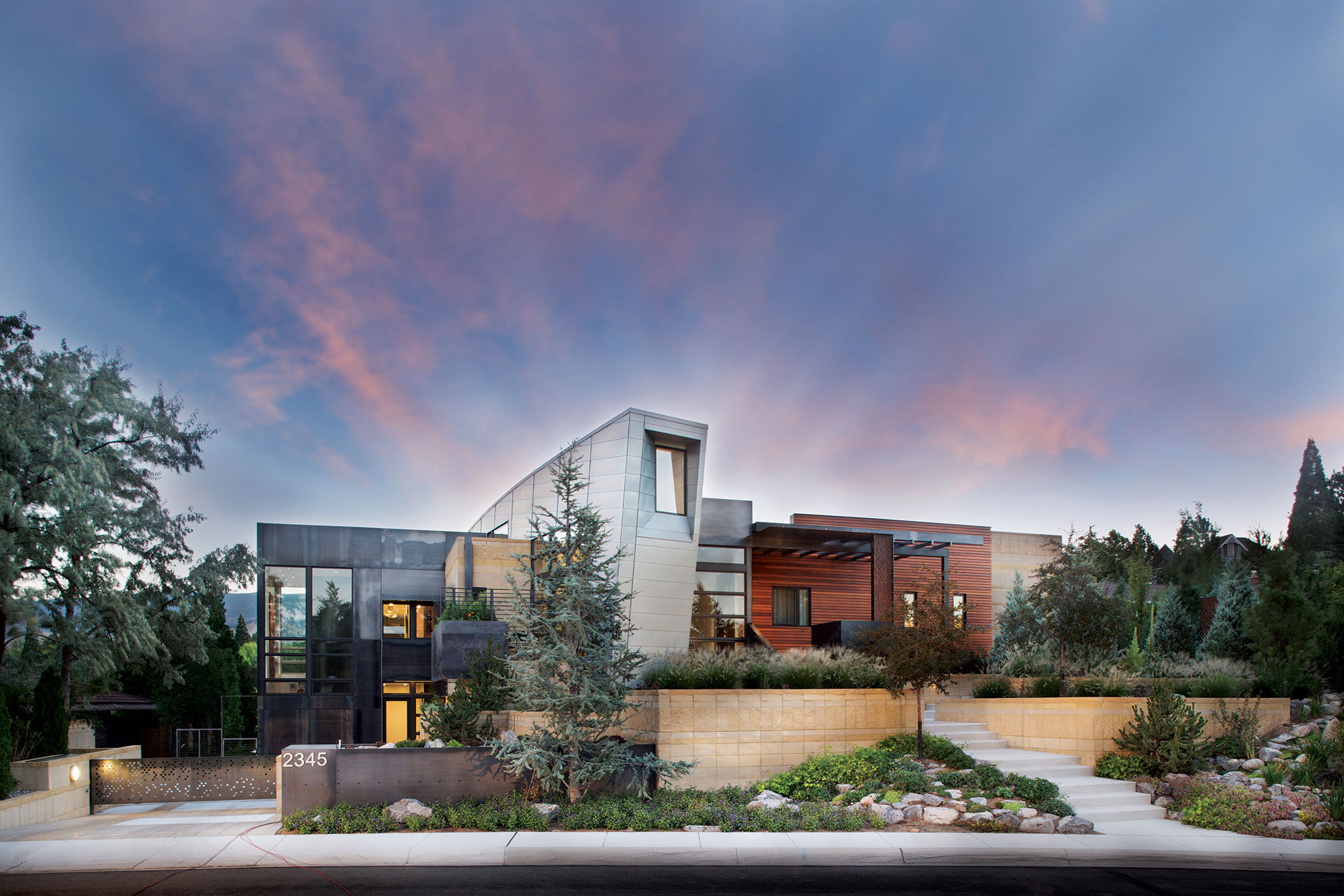 This 6,000-square-foot-home in west Reno catches the eye with its curved zinc spine that projects from an asymmetrical roofline, photo by Tom Zikas

Contemporary Reno home perfected with efforts from a talented team

To realize the potential of this Reno home, the owner assumed the role of an inspiring coach leading a hand-selected team of all-stars. After recruiting a group of talented individuals, she instilled trust and confidence in each member with the idea that, collectively in return, the team of specialists would knock the project out of the park.

And they did—in Ruthian fashion.

“She appreciated the efforts that were going in, and it showed, and that made it easy for everyone to do their best work,” says project superintendent Dave Baker of Reno’s Dianda Construction. “It was a team effort all the way. And the team we had, everybody was basically at the top of their game.”

The owner, who prefers to remain anonymous, is a well-traveled Detroit native who’s lived in numerous homes of various styles across five states. So when she and her late husband decided to relocate to Reno from their lakeside Incline Village property, she had a clear vision of the home she wanted built.

She could not be happier with the end result. The team—headed by Cathexes architects Don Clark and Jeremy Packer, Baker with Dianda Construction and Marcio Decker with Truckee’s Aspen Leaf Interiors, and backed by an assortment of skilled craftsmen—was given specific direction to create a modern, mid-century composition unlike anything in the quiet west Reno cul-de-sac.

Intended as a gathering place for large formal groups and intimate circles of friends, the 6,000-square-foot home stands out with its sculptural curved zinc spine projecting from its asymmetrical roofline. The crafty touches throughout the interior match the contemporary architecture with modern, clean lines and a myriad of different materials used to complement the home’s international collection of mid-century art and furnishings. 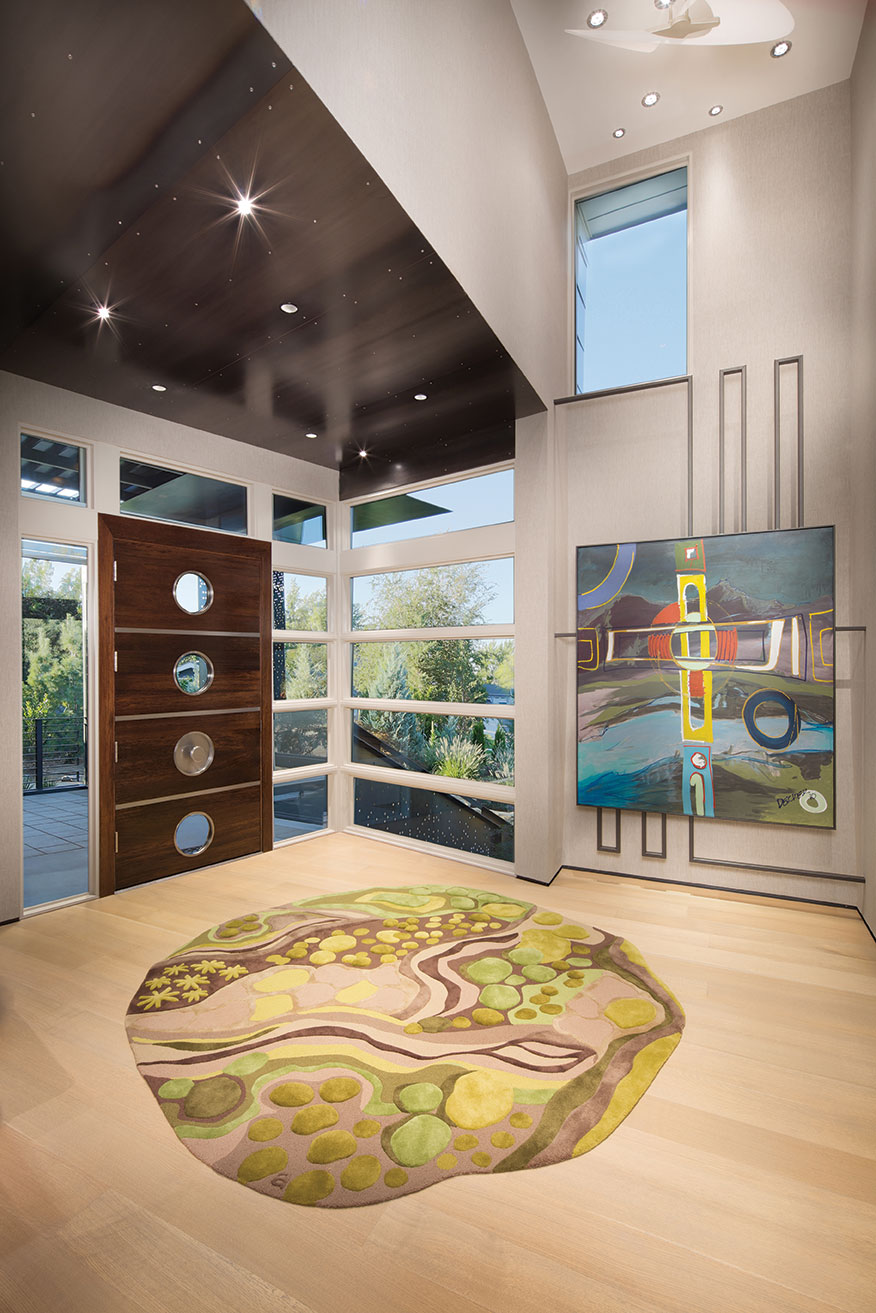 A large painting by Marcio Decker of Truckee’s Aspen Leaf Interiors, called Abstract Tahoe,
is attached by a metal frame to the side walls to give the piece a floating appearance

Careful consideration went into assembling the project’s team. On the interior design side, the owner says she interviewed three designers. She intended to choose one who fully supported her vision, which involved leaving behind her lifelong collection of furniture—which she describes as “very eclectic”—and starting from scratch.

“I had a binder of what I wanted. And interestingly, two of the three designers I could tell looked at this book and thought, ‘Well, I can talk her out of this,’” she says. “But Marcio [Decker] just lit up like a candle and said, ‘Oh, this will be so fun. I’ve never done anything quite like this before.’ He was just in it from the start.”

Decker says the owner’s enthusiasm, extensive knowledge of art and architecture, and keen eye for design were infectious traits that made the project a joy.

“She enlisted all the professionals, and then she came in with her knowledge and her experience to make just a wonderful team,” Decker says. “It was a very fun process largely because she’s so experienced and has done this several times before.”

Inside the large, wooden front door is a colorful painting of Decker’s called Abstract Tahoe, which appears to float flush with the wall. To achieve the floating effect, Decker designed a metal frame that attaches the painting to the side walls.

Above, more than 120 LED lights speckle the ceiling along the vaulted spine walkway leading into the home, creating the feel of a star-studded sky. The flooring here consists of rift white oak. Each plank, cut by McCallister Flooring, is tapered slightly to fit snugly together along the wide, curving hall, while the walls are cloaked in a gray, wool herringbone covering. 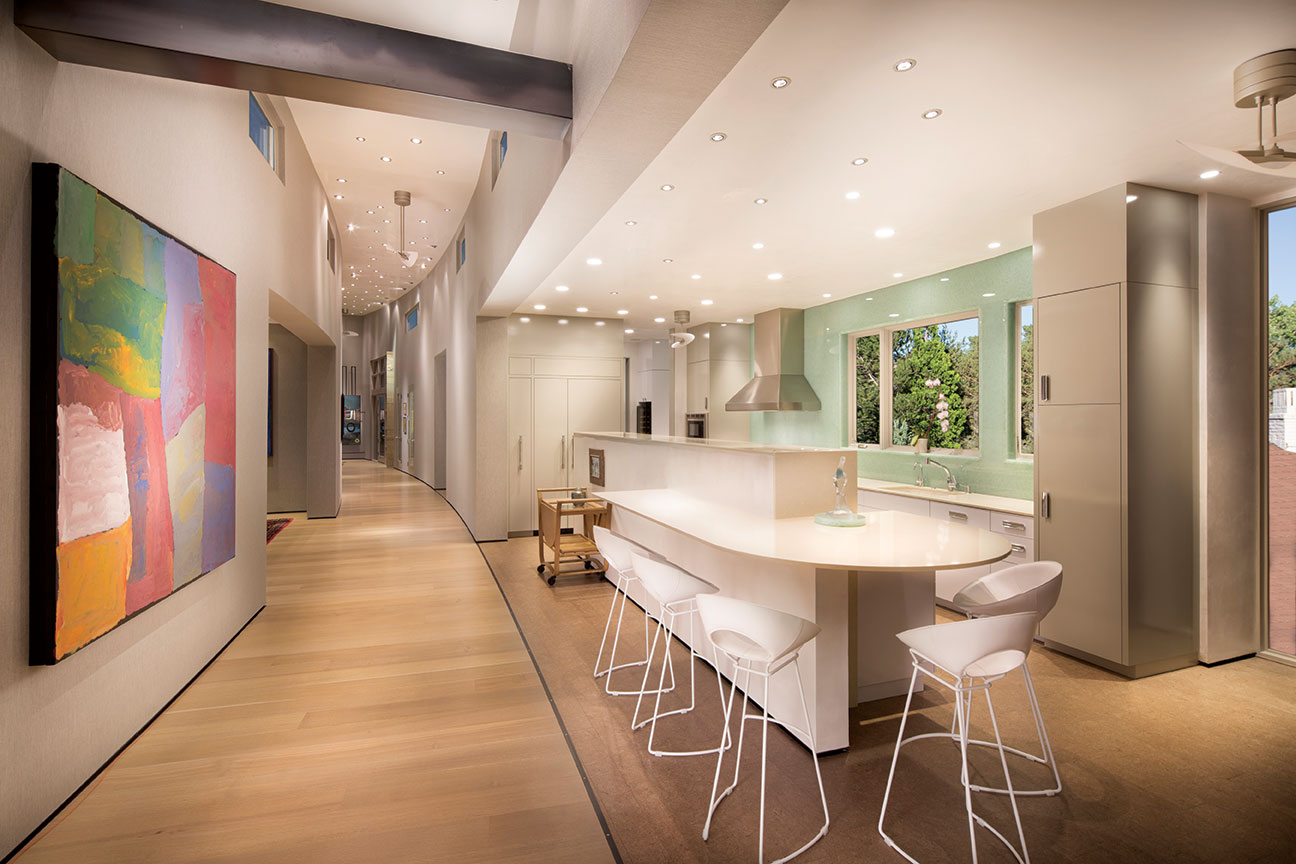 A curved walkway leads past the kitchen and dining room to the main living quarters. Each plank of rift white oak flooring here is tapered
to fit the curvature of the walkway, photo by Tom Zikas

When asked to pinpoint a single favorite aspect of the home, the owner likens the question to asking a mother which of her children she loves most. She loves it all. But there are a few select features that she particularly enjoys. One is the unique kitchen wall.

“It’s a beautiful aqua glass,” she says. “It’s visible all throughout the house, from the living room, the dining room, the halls and so on. It’s recycled glass floated in glass; it’s an extraordinary material.”

The owner also says she enjoys the indoor-outdoor feel. The back wall is made up mostly of windows, from a solarium that extends from the kitchen, through a framed entryway into the living room. A balcony off the solarium overlooks a surprisingly lush gully and an expansive garden in a backyard landscaped by Reno’s River Farm School, with views beyond to the Sierra Nevada.

“Wherever you are, you have a sense of the surroundings, almost as if you’re living on a porch all the time,” the owner says. 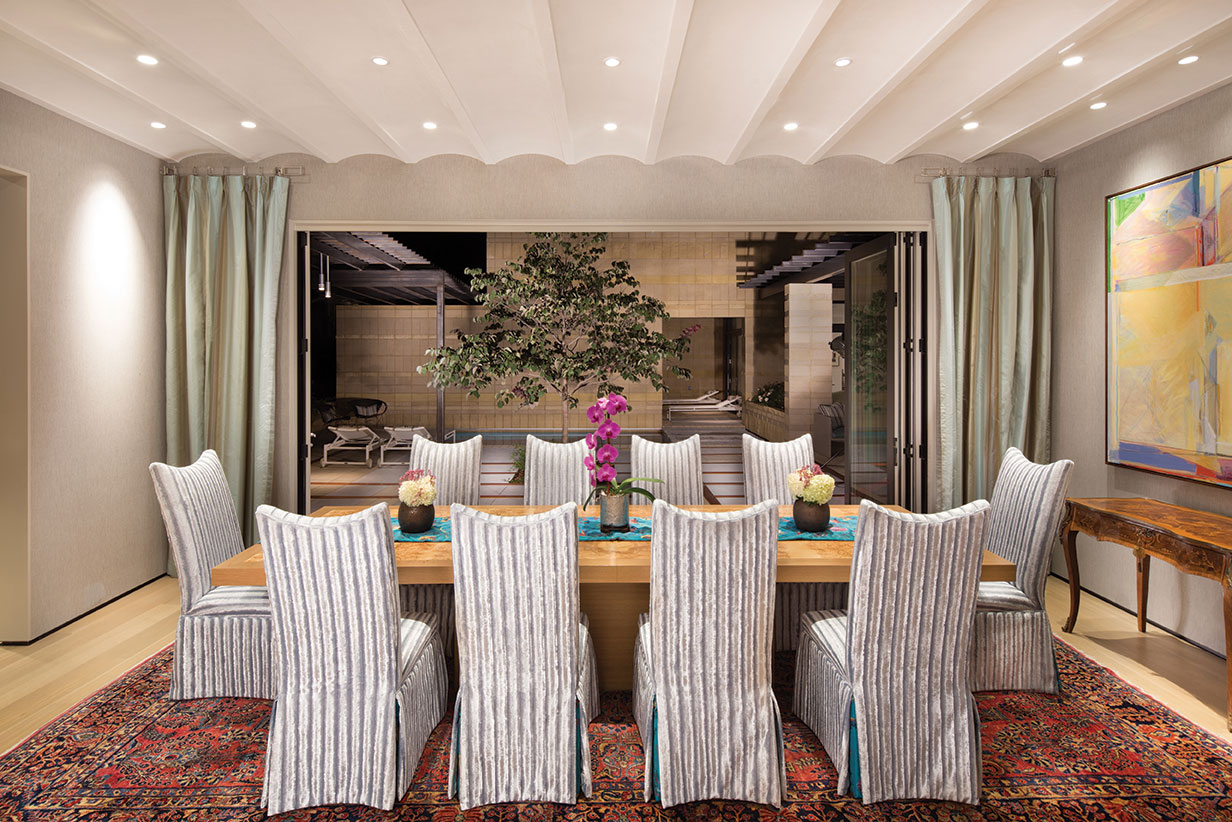 Doors leading from the dining room to the courtyard fold back like an accordion, photo by Tom Zikas

In the dining room—which includes a large table made of olive burl, a scalloped ceiling and steel beams that cantilever to the outside—a wall of glass doors fold back like an accordion. The doors open to a courtyard that includes a barbecue, a lounging area with mid-century furniture, a pool, outdoor shower and block walls and columns with hot-rolled steel by Tutto Ferro—a Reno-based custom steel fabrication business that left its mark with extensive work throughout the home.

Another coveted feature of the home is the bas-relief—a kind of sculpture in which shapes are carved to stand out higher than the flat background—that hangs above the living room’s gas fireplace.

“I had a concept of wanting to have a bas-relief, which kind of references the work of Frank Lloyd Wright,” says the owner.

She approached Decker with the idea, showing him examples of Wright’s and highlighting the aspects she liked such as the proportions, the way the bas-relief is incorporated into the room and the lack of a mantle.

“So about four days later Marcio came in practically not touching the ground he was so thrilled,” she says. “He had this beautiful drawing, and he said, ‘Do you see what it is?’ And eventually I did. He took it from the planned view of the house and of course stylized in a way that made it aesthetically very pleasing.”

The bas-relief is not only a piece of art, but also functions as a hidden panel that covers a television. 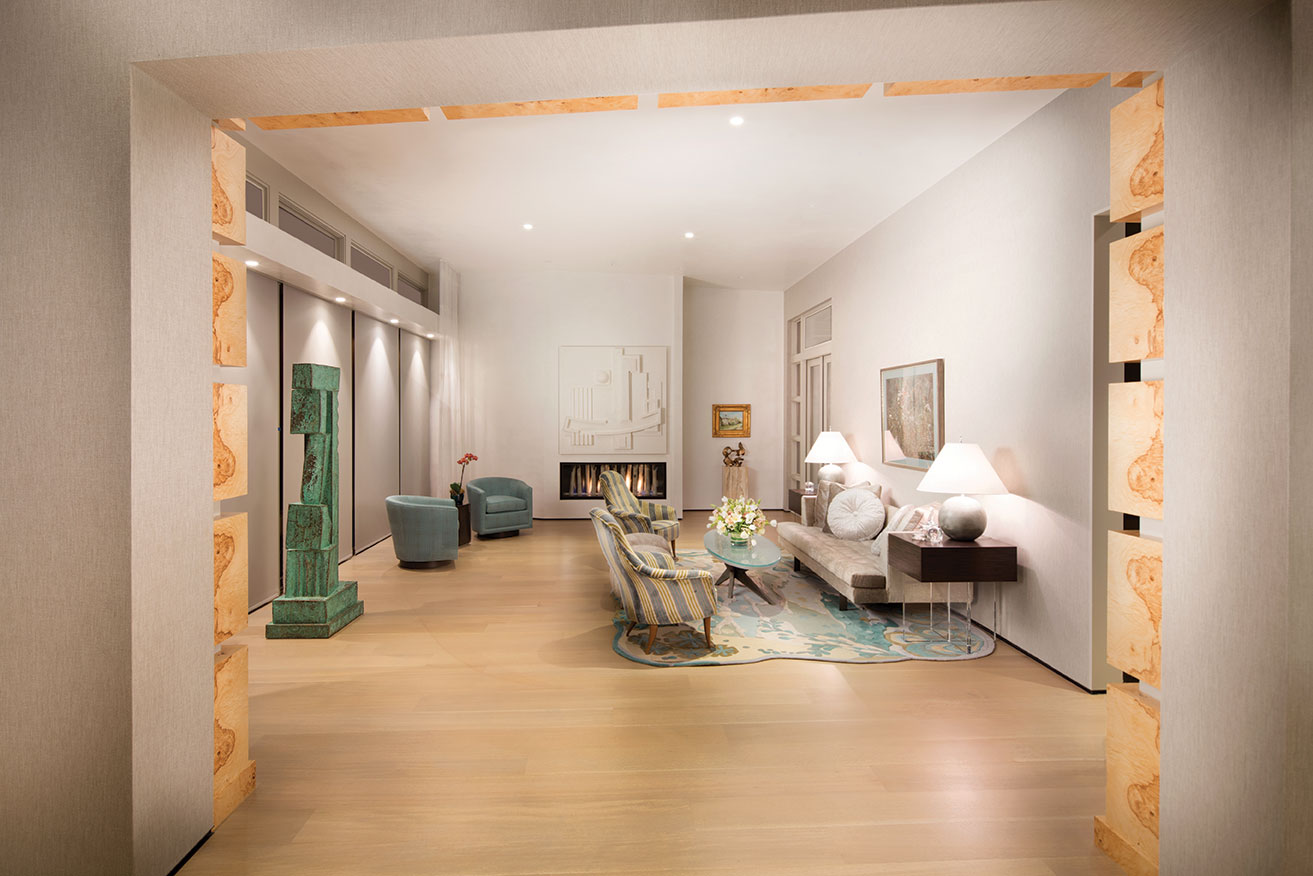 Over the fireplace in the living room is a bas-relief art piece inspired by Frank Lloyd Wright and designed by Marcio Decker of Aspen Leaf
Interiors. The bas-relief also serves as a hidden panel covering a television, photo by Tom Zikas

“I’ve done hidden panels before, but you always know there’s a TV behind it. With this one you really don’t know there’s a TV there,” says Baker, who, from Decker’s design, built the bas-relief out of plywood and foam to keep it light. The surface was then finished with a plaster by Stone Interiors, while Holm Electric created a mechanical lifting mechanism.

“Then, of course, it took every genius in the house to figure out how to mount it and get it to go up and down on this motor,” the owner adds. “That, to me, is how everything went. We would stand and look at something and puzzle it out. We didn’t care where a good idea came from. If all of a sudden the guy who was installing the stone in the kitchen came out and said, ‘I have an idea. I saw this someplace,’ it was like, ‘Oh, great, let’s do that.’”

In addition to the bas-relief, Decker worked with the owner to select artwork that is displayed throughout the home—some of which came from the homeowner’s existing collection. 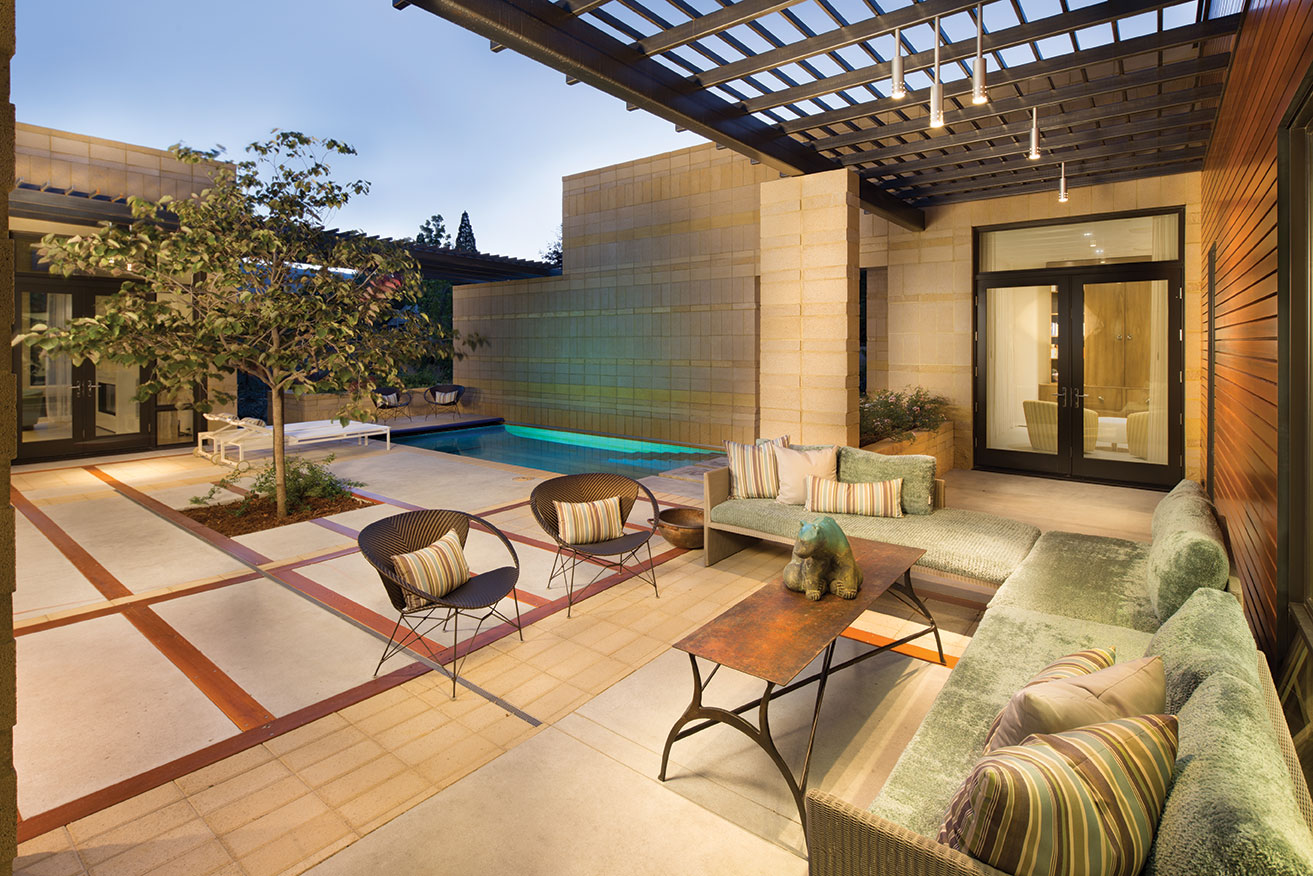 The courtyard continues the home’s theme with mid-century furniture, photo by Tom Zikas

Among the more prominent pieces include a large Aboriginal painting near the kitchen called My Country, by Kudditji Kngwarreye; a sculpture in the living room called Spring Form, by Melvin Schuler; a photograph in the living room called Dreaming, by Robert Glenn Ketchum; and a section in the master bedroom from Along the River During the Qingming, whose eleventh century original has been called “China’s Mona Lisa.”

The home also includes an elevator and wrapping staircase to the lower floor. The inside of the elevator is paneled with rift oak and Venetian plastering by Stone Interiors, while the shaft is covered in hot-rolled steel by Tutto Ferro owner Paolo Cividino.

“The steel detail is beautiful. That’s another craftsman who is just without parallel,” the owner says of Cividino. “He’s an artist in steel.” 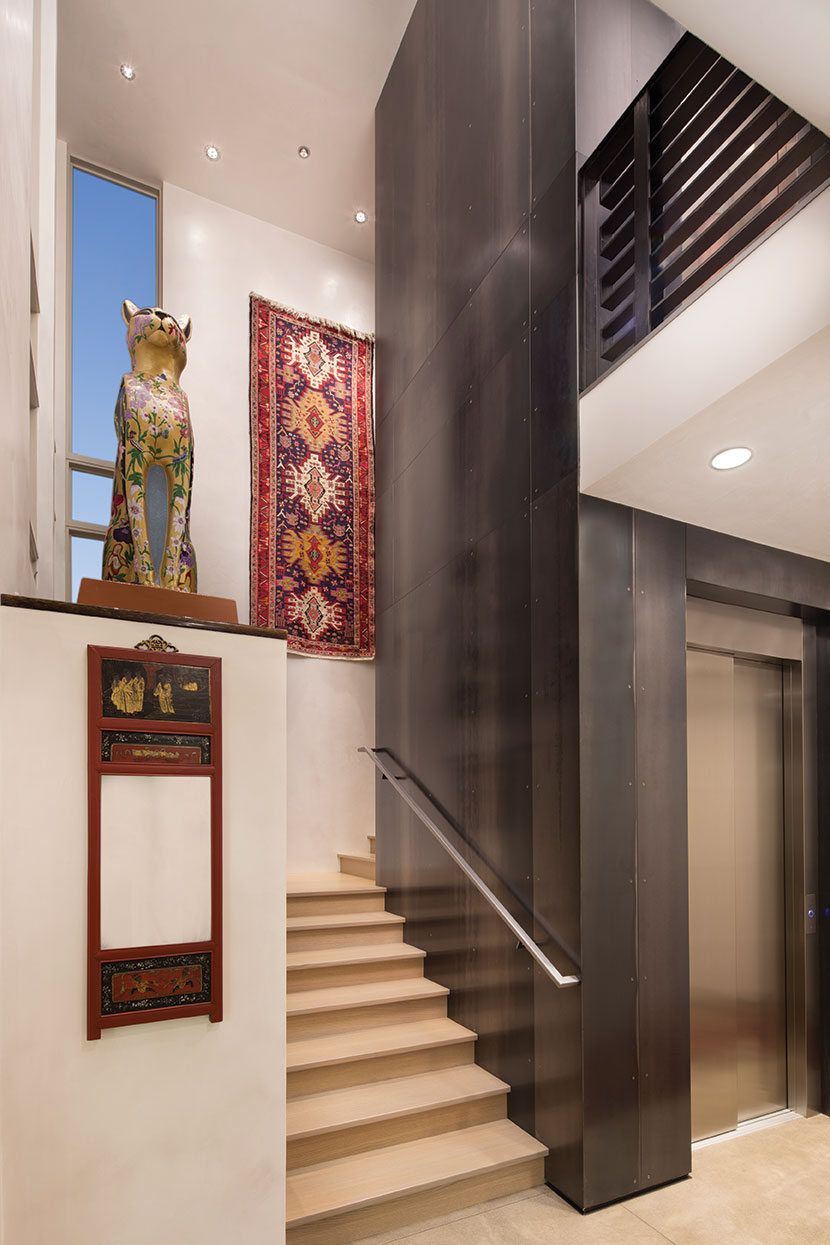 The home includes a staircase and elevator to the lower floor, photo by Tom Zikas

When the home was completed in 2015, the owner showed her appreciation by hosting an open-house gathering for everyone who worked on it.

“I think that Marcio was really so pivotal in the way the house feels, because ultimately, the structure is one thing, but it’s how you finish that structure and how you furnish it that people see and feel. But on the other hand, the structure would not have existed had it not been for the skill at both Cathexes and Dianda to realize the drawings,” the owner says.

“The thing that is magic about this house was the collaborative effort that took place. I had the most talented team of artisans and craftsmen—the plasterer, the paperhanger, the carpenters—I mean, they were just extraordinary. And it was a very happy work site.”

Adds Baker: “This is a career house, for sure. You don’t get to do many like these.”

Touring homes for the upcoming Mountain Home Awards has given TQ editor Sylas Wright a new appreciation for local architecture.