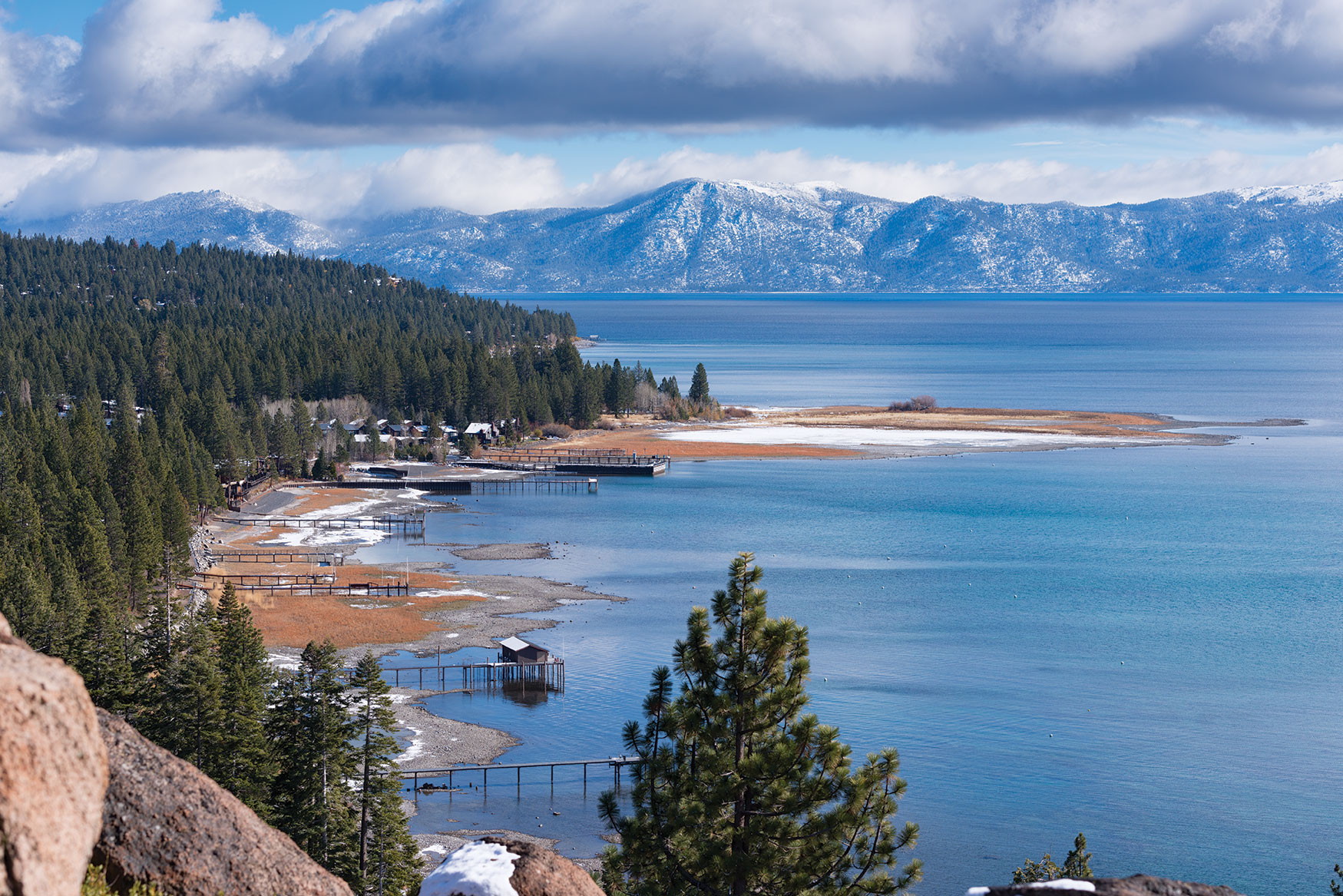 No new piers have been built on Tahoe since 2009, but groups are looking to change shoreline regulations, photo by Court Leve

A two-year effort to agree on new regulations guiding shoreline activities around Lake Tahoe—a thorny issue that has eluded success over the years and which is given added urgency by the impacts of drought and climate change—is now underway.

Government agencies, lakeside property owners, environmentalists and marina operators are participating in talks they hope will lead to acceptable rules addressing issues such as Tahoe’s piers, buoys and boat ramps.

Much is at stake, including the future of boating and how people will play along the scenic shores of one of the nation’s most famous lakes, as well as how a sensitive environment will be protected from the impacts of those activities in the coming years and decades.

“The time is absolutely ripe,” Joanne Marchetta, executive director of the Tahoe Regional Planning Agency (TRPA), says of an effort that, if successful, could put new shoreline regulations in place by the summer of 2018.

Rules affecting piers, buoys and other shoreline structures have always been one of the more difficult and controversial issues for those making the calls over Lake Tahoe’s future. When TRPA adopted a regional plan for the Tahoe Basin in 1987—an achievement that followed years of impassioned negotiations and legal battles—shoreline regulations were left out of the picture. The focus was more on how many new homes and businesses might be allowed.

The shoreline issue was deferred in part because experts were awaiting the results of studies into the effects of shoreline structures on Tahoe’s fish. While scientists ultimately concluded piers had little impact and in some cases are beneficial to fish, consensus over how to proceed over shoreline development standards remained elusive.

Fast forward a couple of decades. After a lengthy process, TRPA finalized a new update of shoreline regulations with a plan adopted in 2008. That plan would have permitted 128 new private piers, no more than five per year. Six new public boat ramps and ten new public piers would be allowed over 20 years. More than 6,000 buoys could ultimately be allowed.

According to a survey taken by TRPA over the summer of 2016, there are an existing 768 piers and 4,881 buoys in 86 buoy fields around Tahoe’s 72 miles of shoreline.

The 2008 shoreline strategy was viewed with alarm by environmental groups, who contended it would allow tens of thousands of new boat trips with inadequate safeguards in place to address environmental impacts, including noise, scenery and water pollution.

The League to Save Lake Tahoe and the Sierra Club sued to block the plan. In 2010, a federal judge ruled TRPA had failed to ensure protection of The Lake’s environment through its regulations, essentially sending the agency back to the drawing board.

TRPA appealed the ruling to the Ninth Circuit Court of Appeals, which issued a mixed ruling in 2012, in part agreeing with the lower court that TRPA failed to address impacts associated with unauthorized buoys.

The result essentially left the issue of Tahoe’s shoreline in limbo, with most regulations guiding shoreline activities now 30 years old. A freeze on all new pier construction remains in place, with no new piers erected since the 2009 legal challenge.

She and others insist now is the time  for another attempt.

There are at least a couple of reasons why, Marchetta says. Interviews conducted in fall of 2015 with nearly 50 shoreline stakeholders indicated a general agreement that it’s time for another try at joining hands.

Another key factor is the extended drought that withered the Tahoe region from 2012 to 2015, dropping The Lake’s water levels below its natural rim. While 2016 brought a normal winter to The Lake, many piers and boat ramps remain high and dry.

The situation could represent a new normal. Many experts say longer and more frequent droughts may be one result of a warming climate. That could make necessary a new way of looking at regulations to allow piers and marinas around Lake Tahoe to operate successfully with lower water levels.

TRPA has contracted with the Consensus Building Institute, a national mediation firm, to help shoreline stakeholders reach for common ground when it comes to managing Tahoe’s shoreline in a way that allows for enhancing recreational opportunities while at the same time protecting the environment.

Meetings are underway between members of a steering committee, including representatives of TRPA, the California and Nevada State Lands commissions, environmentalists, property rights advocates and marina operators. It’s early in a process expected to take two years, but many involved say they are optimistic.

“We haven’t really got to the meat of the matter, but we’re looking at this as a fresh start to collaborate,” says Jan Brisco, executive director of the Tahoe Lakefront Owners’ Association, which represents some 1,700 owners of private lakefront properties around The Lake. Many have waited years to build piers or pursue other shoreline projects.

TRPA’s existing code, Brisco says, remains “very restrictive” for any shoreline projects, many of which could come with substantial environmental enhancements.

“We’re not able to get projects that have significant scenic and environmental benefits,” Brisco says.

Brisco says she’s more confident this shoreline effort will succeed because all the parties involved are working to reach key agreements up front and before TRPA begins writing regulations that might later be challenged in court.

“We’ll have to see how all this comes together,” Brisco says. “We’re still so early in this process it’s hard to say where this will end up. I’m hopeful we will have a good plan that will be supported by everyone at the table.

“This is our No. 1 priority and we are committed to seeing it through.”

So is Darcie Goodman Collins, executive director of the League to Save Lake Tahoe, one of the two environmental groups that successfully sued to block the 2008 shoreline plan.

“There have been numerous attempts to do this and they have all failed,” Goodman Collins says. “With this one, I am hopeful we will be successful.”

Hope comes in part due to a commitment to the use of the best available science when it comes to the impacts of boating, which remains a concern to the League, Goodman Collins says, adding that she believes it is possible to build more piers and allow other alterations in shoreline activities around The Lake and still offset environmental impacts.

“I’m optimistic we will find ways to mitigate the environmental effects associated with boating access to The Lake,” Goodman Collins says. “We started this off with an agreement that we all want a successful outcome.”

Adds Marchetta: “I’m optimistic this time because, truthfully, we have all the partners committed to solving this problem. It’s not TRPA alone trying to come up with a solution. I know that will lead to success this time.”