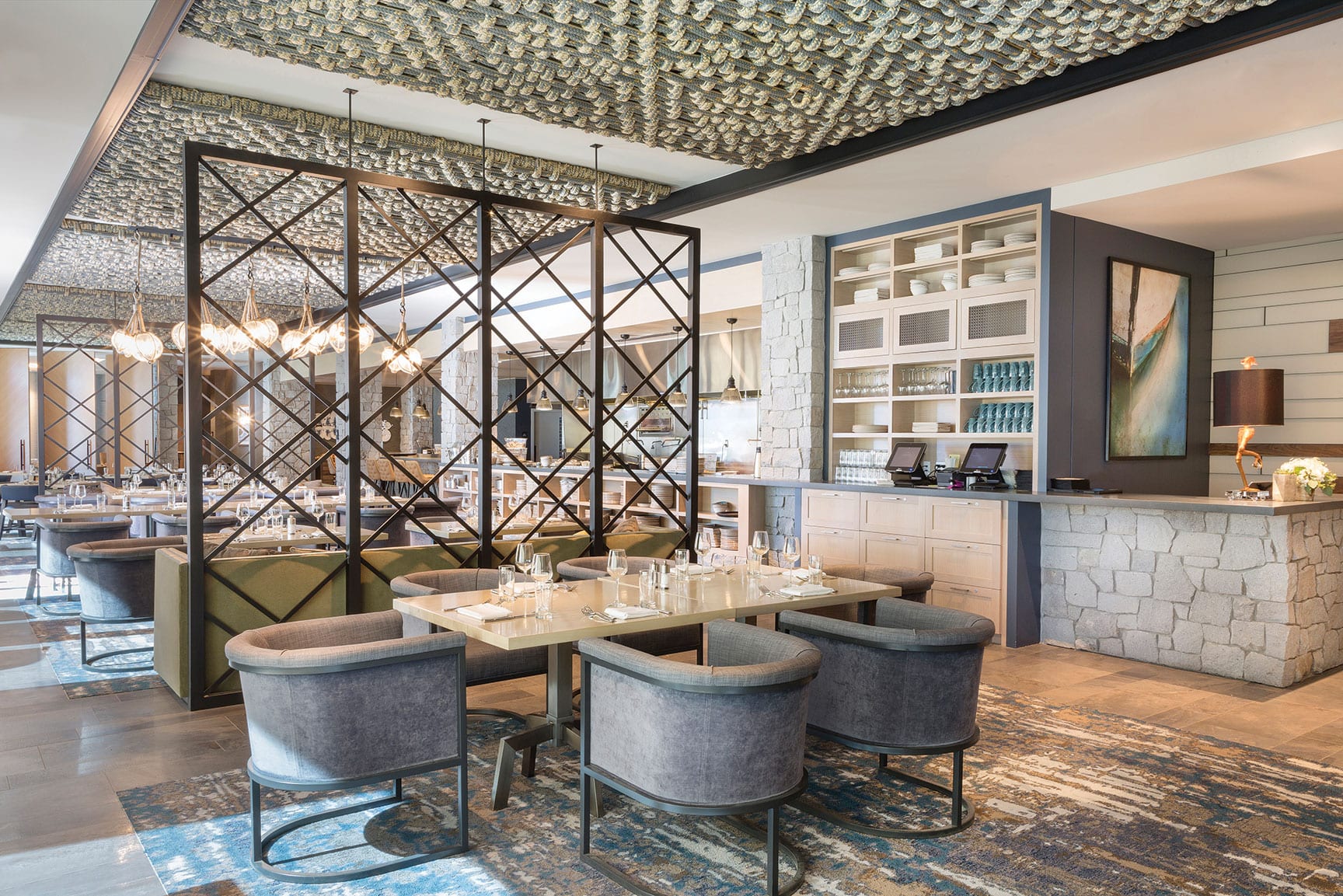 With the launch of the swank new $100 million, 154-room LEED-designed Edgewood Lodge this past summer comes the sleek Modern American Edgewood Bistro, offering all-day dining in a mountain-chic-meets-urban-contemporary setting. The 150-seat space done in warm wood and stone flows from the lodge’s soaring Great Room, through a bar-fireplace-lounge area and into the airy and well-lit main dining room, where an open kitchen, high-top chef’s table and private dining space await. Beyond the picture windows outside, a heated year-round patio, complete with a horizontal fire pit overlooking the pool and lake beyond, can accommodate another 80 diners. A horizontal fire bar provides both heat and ambiance as the sun sets over Lake Tahoe, photo courtesy Edgewood Tahoe

Created by Hirsch Bedner Associates, the world’s largest hospitality design firm, the collective space exudes a welcoming yet hip vibe, pulling in a well-heeled crowd of golfers, couples and families, locals and visitors, including actress Sofia Vergara and the cast of ABC’s Modern Family while they were in town filming the show’s season premiere.

“As opposed to [Edgewood’s] other two restaurants, which are well established and have their own styles, we wanted to be able to cook the food that we couldn’t really fit into those other menus,” says Lofgren, who was born and raised in Oakland and trained in San Francisco restaurants such as Hawthorne Lane, Butterfly and Nova, and locally at Evan’s, MontBleu, Stateline Brewer and Blue Angel. “The Bistro lets us do that. With the help of our customers, we are creating the kind of food that’s broadly appealing while still having something for seasoned and adventurous diners.” Diners can enjoy one of several areas of comfy seating throughout the restaurant, photo courtesy Edgewood Tahoe Start or finish a meal with an artisanal cheese board, photo by Susan D. Rock

In addition to the half-pound bistro burger, there’s a grilled hanger steak sandwich with Gruyere fondue, onion jam and arugula, and a seared yellowfin BLT gets lemon aioli on a grilled baguette. The Maine lobster roll comes on toasted brioche. Some of the lunch menu carries over to dinner, with the addition of paper-thin-sliced Wagyu carpaccio finished with crispy capers, olive oil, arugula, lemon, shaved parmesan and smoked salt. The P.E.I. mussel dish is made with Spanish chorizo, leeks, herbs, white wine saffron sauce and bistro fries. If you didn’t start with an artisan cheeseboard, a second opportunity awaits with dessert. Select from a nightly pot de creme or perhaps a pear tart with candied almonds, honey mascarpone and cinnamon ice cream. The pumpkin cake is topped with cinnamon cream cheese frosting and pecan caramel, while the caramelia mousse dome route is a rich mound of chocolate mousse with cocoa nib tuile and vanilla ice cream.

Some 70 mostly familiar wines are on the California-centric list, with nearly 30 pours by the glass, including Edgewood’s private label cabernet sauvignon.

A meal here doesn’t have to end with the check. Grab that glass of wine, stroll the grounds and drink in forest, lake and mountain vistas. We think you’ll agree that Edgewood Bistro is teed up to be one of South Shore’s new top dining options.