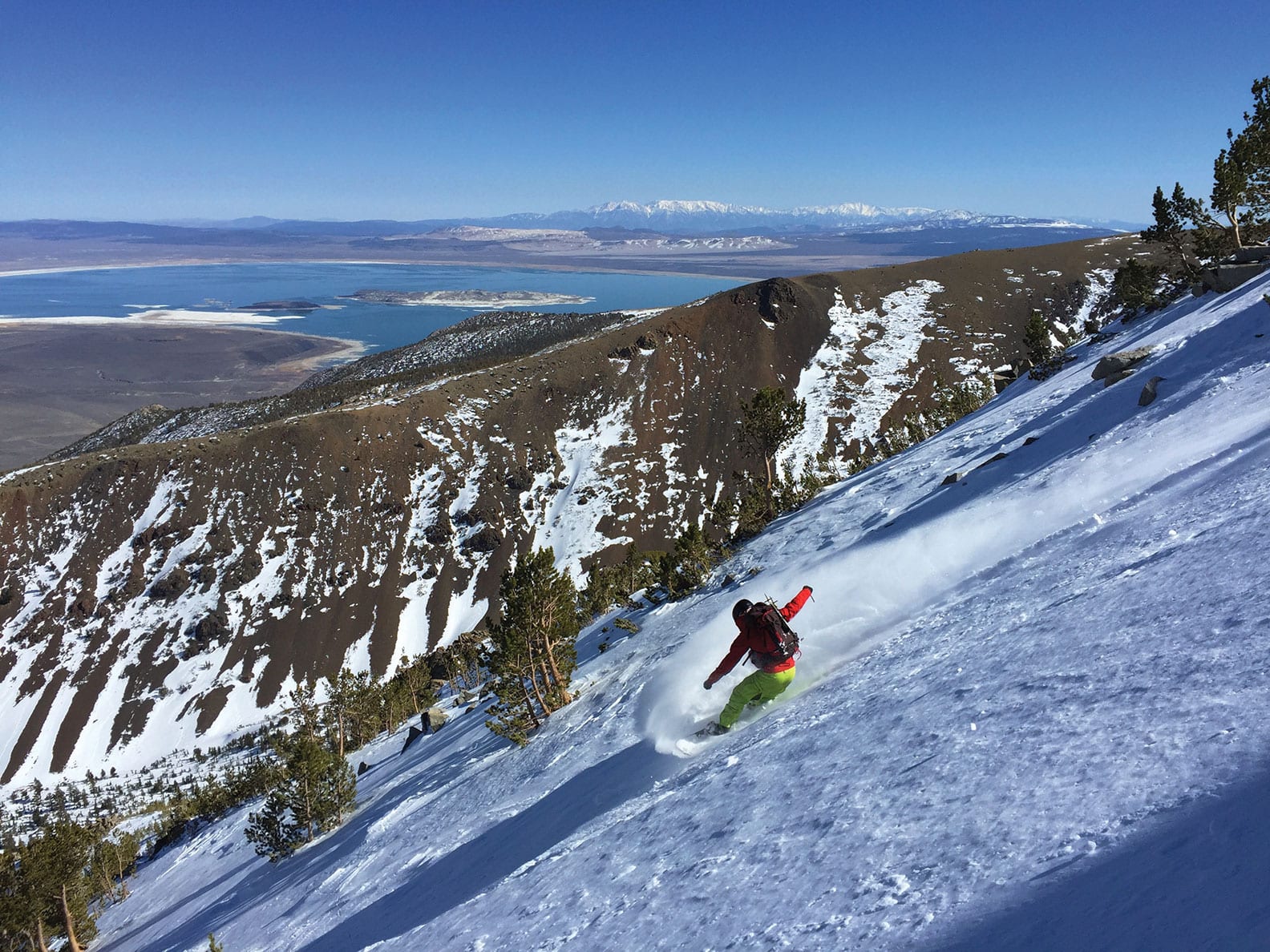 On a winter day at Snowbird, Utah, in 2013, professional Tahoe-based skier Jeremy Benson got an unexpected call from a number he didn’t recognize. Washington-based publisher Mountaineers Books wanted to know if he’d be interested in writing a backcountry ski and snowboard guidebook for California.

“I thought, ‘That’s ambitious. I don’t know if I have that in me,’” Benson recalls.

He’d done some freelance writing as a skier, including for another Tahoe-area writer, Megan Michelson, who’d passed his name to the guidebook publisher. But never anything like this.

After mulling over the proposal, he called back the same day and agreed to the project.

The ramp-up process was intense, requiring a contract, writing samples, a proposal and a few mock-up ski routes. All went well, but Mother Nature had other plans, as California was in the midst of a historic four-year drought.

“What I had intended to take one or two seasons ended up taking more than four years,” Benson says. “The publisher was understanding. There’s really nothing anyone could do about the weather, and the last two years of the drought were the worst I’ve seen around here. There was so much [terrain] I couldn’t even try.” 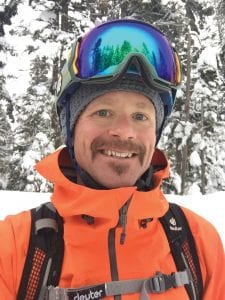 While he was able to pick off a few high-elevation north-facing routes, the project was essentially shelved until the near-average winter of 2015–16, which brought the book back to life. The following winter, which delivered nearly 200 percent of average snowfall, allowed Benson to cap off all 99 routes included in his book, Backcountry Ski & Snowboard Routes: California, which was released in October 2017.

Covering the Sierra Nevada and Southern Cascades, Benson selected routes based on repeatability—runs that get consistent coverage, not dependent on monster winters like 2016–17—and representing a wide range of ability levels.

“Not everyone wants to ski the hardest or the mellowest lines, so I tried to provide a good variety,” Benson says. “I also don’t call out the most gnarly lines. I didn’t want to tell an intermediate skier how to get into a line that could get him in trouble.”

The publisher also wanted to make sure snowboarders could access all the same routes—a concern Benson says is less pressing as splitboard technology has given the discipline similar access to ski touring.

“I skied everything that’s in this book. I didn’t want to include anything I hadn’t done myself,” Benson says. “It’s hard to describe it if you haven’t done it, and I wanted to get photographs, too.”

The skiing came naturally, as Benson typically spends five to seven days a week in the backcountry. The writing, however, was time-consuming. Putting in 20 to 40 hours a week on top of other work and duties, Benson says he was chained to his desk, particularly during edit cycles when he would get the whole book back marked up with questions and queries.

But tackling the project pushed Benson to ski new places and with a new perspective, opening up parts of the Sierra he hadn’t seen before. He even found lines he hadn’t skied before around Lake Tahoe, including Trimmer Peak above the South Shore, which offers an impressive pitch and well-spaced trees.

The mountains between Truckee and Lassen Peak don’t get much attention, Benson says, so he was surprised at the great skiing on Eureka Peak near Graeagle.

“It’s just the tip of the iceberg in that area. It’s sort of untapped. There’s a lot more to ski up there,” Benson says.

“I would say Jake’s is kind of a no-brainer, a classic West Shore hit with phenomenal access and beautiful scenery combined with awesome skiing,” Benson says.

In the Eastern Sierra, Benson’s favorites include Mount Emerson near Bishop and Mount Langley, a 14,000-foot peak that stands more than 8,000 feet above the Owens Valley.

“There’s so much to access in the Eastern Sierra. It’s a backcountry skiing buffet of epic lines and peaks just staring you right in the face,” Benson says.

North of Tahoe, Benson’s also a fan of Mount Shasta.

“Shasta is a can’t-miss, really. Skiing on Shasta is a cool experience and is unique in California,” Benson says of the 14,000-foot volcano in the Southern Cascades. “The opportunity to take a 7,000-foot run from the summit, that’s really cool. You can have the best corn run of your life.”

Overall, Benson says the project was a great experience. It also led him to write another guidebook for Mountaineers Books called Mountain Bike: Tahoe: 50 Select Singletrack Routes, which is featured in Tahoe Quarterly’s Summer 2017 issue.

“A big period of my life went into creating this,” he says. “It feels good to have it done and I hope it benefits people, allowing them to explore and get the same enjoyment I get out of the mountains.” 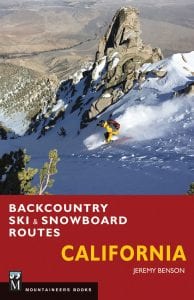 Each route description includes a starting point, a high point, an approximate round-trip distance, elevation gain, estimated time, difficulty level (easy, moderate, strenuous and very strenuous), terrain rating on a scale of one to five, aspect (the cardinal orientation of the slope) and best seasons for the run. The descriptions also include recommended USGS topographical maps for those looking for more detail than the black-and-white maps in the book.

Benson’s first-hand experience with each route is apparent, and photos help characterize the run and orient the skier or snowboarder.

The book is intended for  backcountry skiers and snowboarders with the necessary experience, avalanche education and safety equipment (beacon, shovel, probe).

The book is available locally at Tahoe Mountain Sports, Alpenglow Sports, Village Ski Loft and The Backcountry, as well as Amazon.