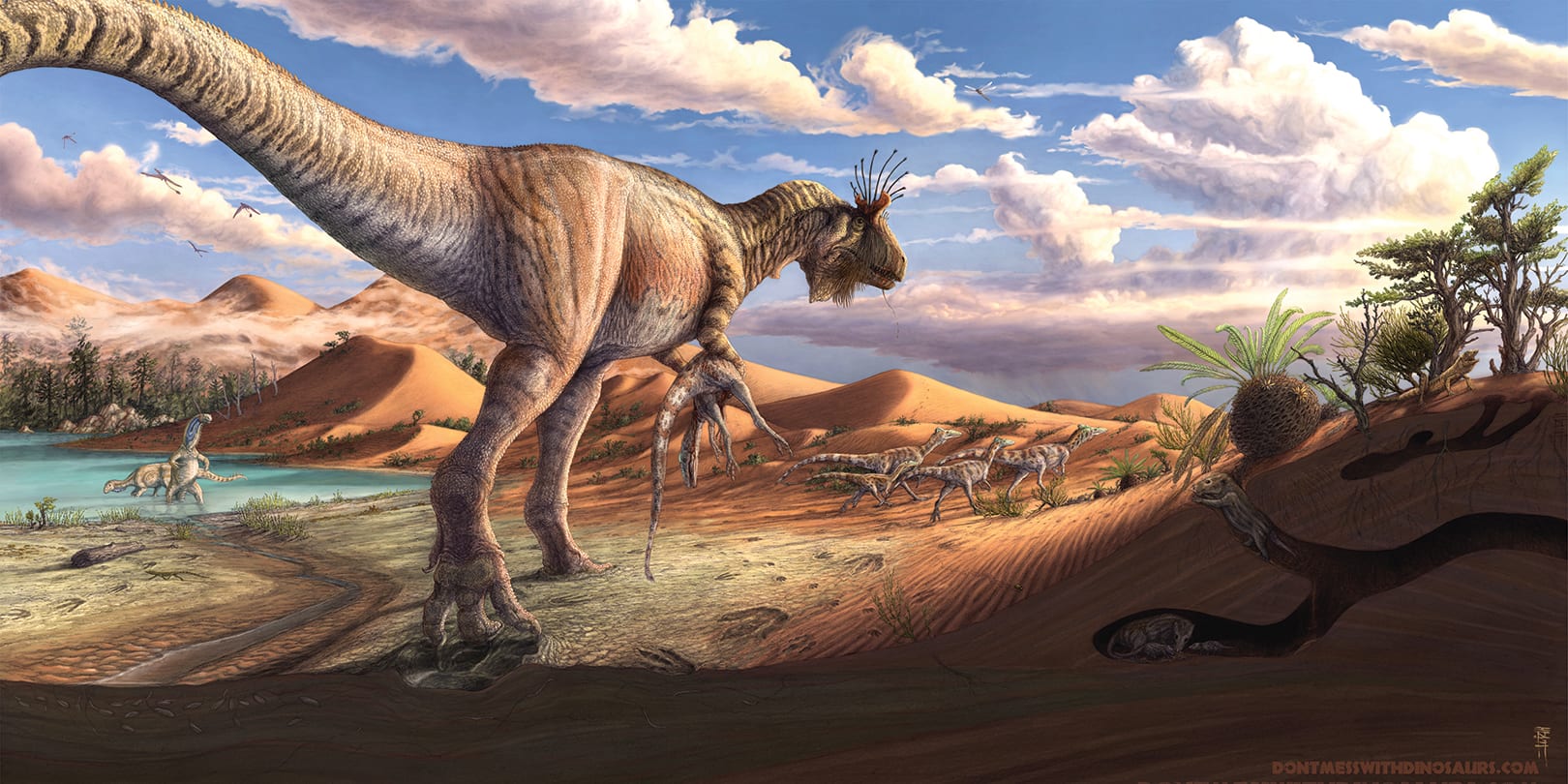 A scene that may have played out in Nevada during the Jurassic Period 180 million years ago depicts a dilophosaur with a coelophysoid in its grasp. Rocks and fossils from this time period have been found at Red Rocks Canyon National Conservation Area near Las Vegas as well as Valley of Fire State Park, illustration by Brian Engh/dontmesswithdinosaurs.com, commissioned by ReBecca Hunt-Foster/Utah BLM

Digging into Nevada’s Prehistoric Past

The Silver State’s most notable fossil finds have been ichthyosaurs, but now paleontologists are uncovering obscure dinosaurs that once roamed the Great Basin

The arid soil of Nevada holds many secrets, hints that point to a prehistoric past where voracious reptiles roamed and underwater predators lurked. But until now, Nevada’s landscape has closely guarded the answer to one of the Great Basin’s most compelling paleontological questions—which of the many dinosaur species thrived in ancient Nevada?

Paleontologists hope to learn more about this relative unknown when they excavate a site on a remote plot of land outside Eureka, Nevada, this spring. 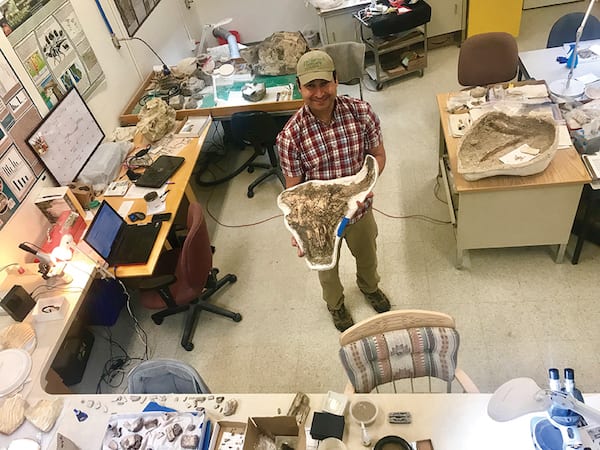 “It’s something big is all we know,” says Dr. Josh Bonde, curator of paleontology at the Las Vegas Natural History Museum, who estimates the fossilized remains at the site to be of a creature anywhere from 25 to 30 feet long. It is an interesting find, as most of Nevada’s dinosaur fossils have been isolated bones and not a complete animal, or even large parts of an animal, from this time period.

While the finds of ichthyosaurs and other ancient reptiles have been relatively common in the Silver State, the discovery of actual dinosaurs has been few and far between. In fact, up until about 10 years ago, dinosaur remains were scarcely heard of in Nevada. The majority of fossil excavation focused on newer species from the Ice Age or marine reptiles from the Triassic period, such as the ichthyosaur. It wasn’t until Bonde and Becky Humphrey, staff paleontologist at the Las Vegas Natural History Museum, began searching for dinosaur fossils across the state that dinosaur discovery in Nevada was finally propelled forward.

On their radar is the Eureka site where dinosaur remains have been found but not fully excavated. Humphrey is also working with remains found by University of Nevada, Las Vegas students in 2008 in Valley of the Fire State Park—fossils that are believed to belong to a new species of hadrosaur, a family of duck-billed dinosaurs. If correct, this would mark the first unique dinosaur species to be found in Nevada.

The bones have been prepared and now Humphrey is working at the museum—the only working paleontology lab in the state of Nevada—to learn more about the animal they belong to, a project she picked up in 2017 after the bones had sat for about nine years. 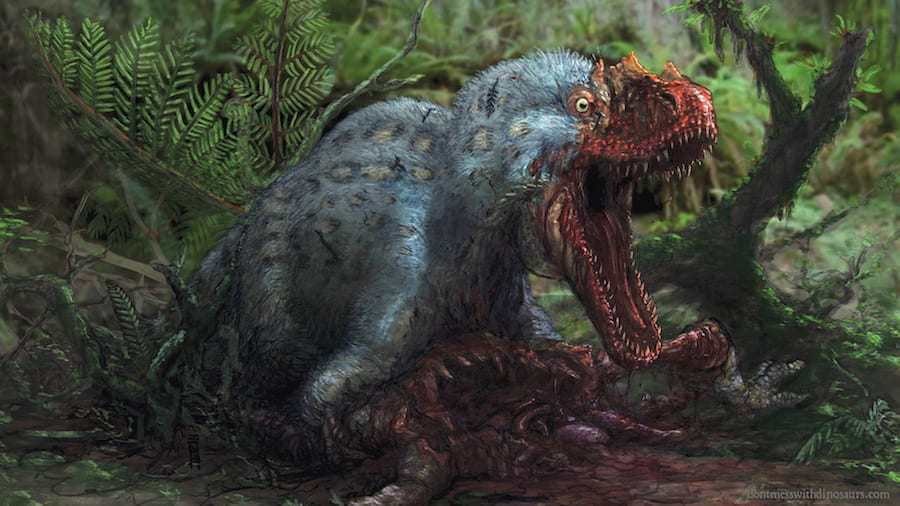 A tyrannosauroid feeds on its prey in a scene that may have played out 100 million years ago in Nevada’s Valley of Fire State Park, where ancestors of tyrannosaurs have been found as well as fern fossils, illustration by Brian Engh/dontmesswithdinosaurs.com, commissioned by ReBecca Hunt-Foster/Utah BLM

Dinosaur excavation has been a slow process in Nevada. Due to tectonic activity, including a mountain-building event that took place in California and Nevada during the Mesozoic era (the age of the dinosaurs), there are few rocks to search through from these time periods that are rich with dinosaurs, and those paleontologists do find are often banged up. While there have been dinosaur tracks found from the Jurassic Period, proving that meat-eating theropods (likely the Coelophysis) and plant-eating ornithopods once lived in Nevada, no dinosaur remains have dated back that far within the state’s borders. 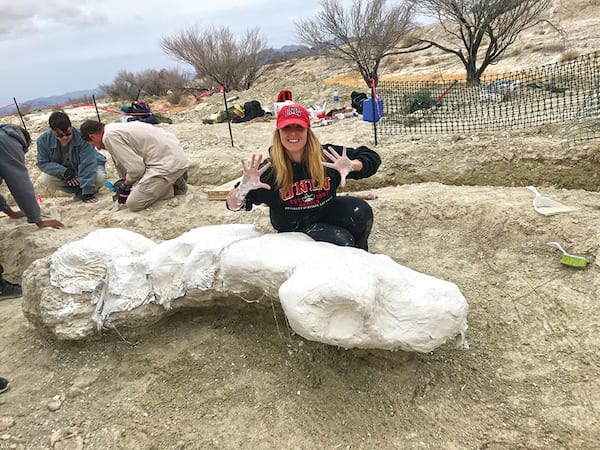 Close to Nevada’s eastern border, where dinosaur fossils are more prevalent, the landscape is similar to that of southern Utah and therefore provides different types of fossils than the rest of the state. Bonde says the list of Nevada dinosaurs currently known from bones and teeth include duck-billed hadrosaurs, iguanodons, titanosaur sauropods, allosaurs, tyrannosauroids (tyrannosaur ancestors), raptors, ankylosaurs and small bi-pedal plant eaters called hypsilophodonts.

Due to the geographical changes that shifted the ocean environment to a more mountainous area, the Jurassic and Cretaceous periods are not heavily represented in Nevada in fossil form. And because of the lack of rocks to explore, Nevada is often overlooked while scientists dive into areas with bigger promises of dinosaur fossils and areas where fossils are better preserved. But that has left a large part of the state unexplored.

“We are filling in that gap of Nevada’s history,” Bonde says of Humphrey’s and his work. “I’m hoping to find dinosaurs in at least a few more counties.”

A scene that may have played out in Nevada during the Triassic Period 230 million years ago shows an ichthyosaur washed up on shore, with meat-eating dinosaurs and scavenging pterosaurs closing in on the carcass, illustration by Brian Engh/dontmesswithdinosaurs.com, commissioned by ReBecca Hunt-Foster/Utah BLM

While dinosaur fossils in Nevada have been limited, and largely scattered, there is one prehistoric creature that isn’t hard to find within Nevada’s borders, and it’s garnered a lot of attention for its size, age and large quantities in the region. 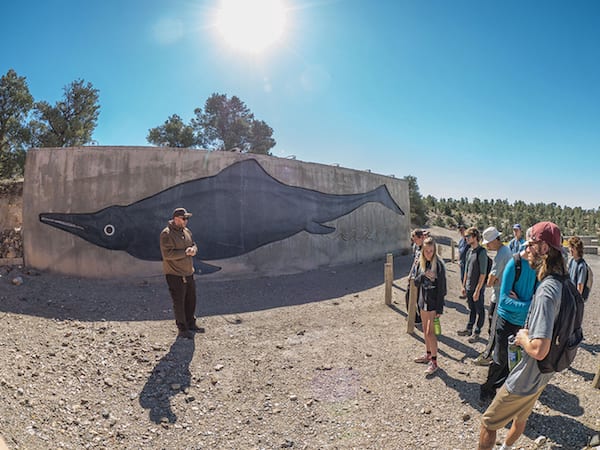 A ranger at Berlin-Ichthyosaur State Park gives an introductory presentation to science students from Sierra Nevada College before leading a tour, photo by Martin Gollery

Most people in the Reno-Tahoe area have heard of the ichthyosaur, a marine reptile that inspired the name of Great Basin Brewing Company’s Ichthyosaur “Icky” IPA. The ichthyosaur is considered the state’s most prized discovery, turning up one of the world’s only complete skeletons—a 55-foot behemoth discovered in 1928.

Geography has everything to do with the prolific discovery of ichthyosaurs in central Nevada, which Bonde believes was the only portion of the state still under water during the early Mesozoic era (most of Nevada was above sea level after about 230 million years ago, he adds). Ichthyosaurs eventually experienced a mass die-off in the valleys of Nevada, preserving many skeletons in limestone rocks.

“We estimate that there could be upwards of 100 (ichthyosaur fossils) just in our 1,500 acres,” says Todd Wheeler, a park ranger at the Berlin-Ichthyosaur State Park in the ghost town of Berlin, Nevada, where the 55-foot complete fossil was found. “We haven’t found any other fish-like animals on this site other than the invertebrates and ichthyosaur.”

Since 1954 when paleontologists started excavating Berlin-Ichthyosaur State Park, Wheeler says 37 remains of ichthyosaurs have been found in total, seven to nine of which are on public display.

Ichthyosaurs, whose name translates to “fish lizard,” resembled dolphins with long snouts and large, sharp teeth. As marine reptiles, they lived in the shallow seas of Nevada for millions of years during the Triassic Period (although they existed elsewhere in all three Mesozoic eras), and as a result more fossils of the creature have been found in the Silver State than anywhere else in the world. Ichthyosaurs have been discovered on every continent except Antarctica, but the discoveries in Nevada are particularly interesting due to the size of the fossils. Typical discoveries here are 30 to 70 feet in length. 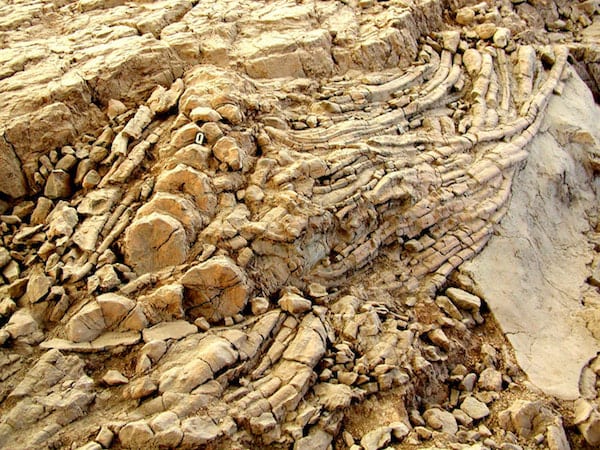 “Ours are monsters compared to the others,” Wheeler says. “Other ichthyosaurs are the size of a large trout, not a school bus. Not to mention the sheer number of ichthyosaur fossils found here.”

West of Berlin-Ichthyosaur State Park in the area that is now Lake Tahoe, Reno and Carson City, fossils from the late Triassic Period (about 200 million years ago) are not found. Scientists are not sure whether ichthyosaurs lived in the deep ocean basin that existed here at the time, or if they preferred the more protected inland seas that were once prevalent in today’s central Nevada. Granite formation and tectonic activity destroyed or displaced any Triassic fossil-bearing sediment that might have once existed in this region.

“The geology gets complicated,” says Dr. Paula Noble, a professor in geological sciences and the engineering department at University of Nevada, Reno, adding, “Western Nevada was basically the edge of the continent.”

Experts hypothesize that the ichthyosaur evolved to become a marine reptile as food sources became more prevalent under water. Eventually they adapted completely to the water and could no longer exist on land. One theory is that when it came time to adapt again to a changing climate, the reptiles didn’t act quickly enough and instead experienced a massive die-off. Other theories include death by toxic algae blooms, specifically red tides, which are naturally occurring and still happen today.

Whatever the cause, ichthyosaurs went extinct close to 100 million years ago—well before the last dinosaurs died out. 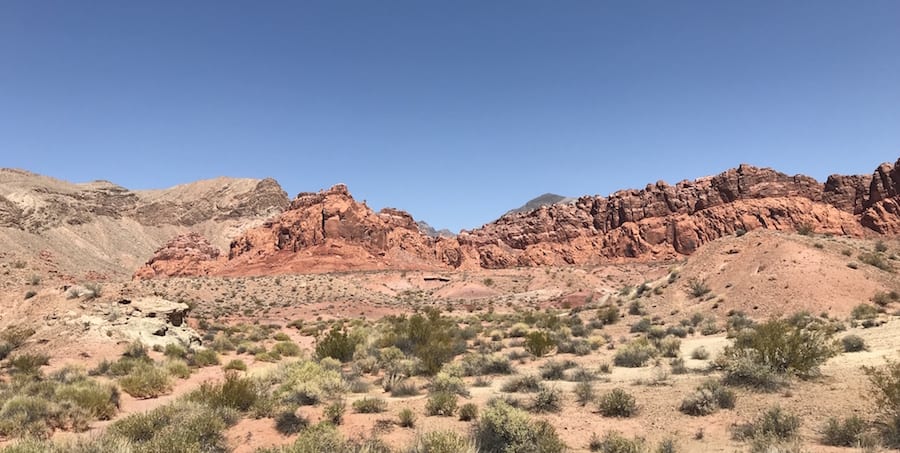 This Jurassic Aztec sandstone in Southern Nevada preserved fossilized sand dunes that were part of a sand sea spanning from Southern California to Montana. Just like in modern deserts, animals lived between these dunes, as evidenced by their footprints left in the sand, courtesy photo 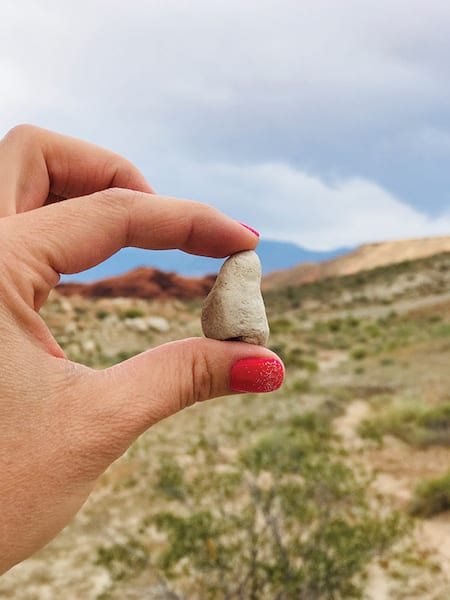 Throughout Nevada, excavators have found plants and mammals such as elephant types, mammoths, camels, rhinos, short-faced bears and horses from the Ice Age. Vertebrates and other marine fossils that existed during the age of the dinosaurs are also prevalent throughout Nevada. In Dixie Valley northeast of Fallon, an area Wheeler says is “rich with fossils,” brand new species yet to be identified have also been found. Fossils are known to exist in the Pilot Mountains as well, but they are not as intact as those found in other locations, likely due to the energy of the waves at this geographical point.

In Carson City, America’s largest exhibited Columbian mammoth, the Wallman Mammoth, from the Black Rock Desert stands on display, a discovery made by a researcher at UCLA after a fossilized tooth prompted a search.

The full extent of Nevada’s prehistoric animal kingdom is still somewhat unknown. While paleontologists and geologists know that the state was once the rugged coastline of the continent, teeming with toothy ichthyosaurs and later Ice Age mammals, the number and types of dinosaurs that once lived across the Silver State is a mystery still waiting to be unlocked. But that mystery is slowly giving up its secrets, starting with the windswept desert outside of Eureka, where a springtime dig will uncover one of the state’s ancient inhabitants and shed light on an intriguing period of Nevada’s fossilized past.

Nora Heston Tarte is a Reno-based writer and editor with a lifelong appreciation of dinosaurs and other prehistoric creatures.