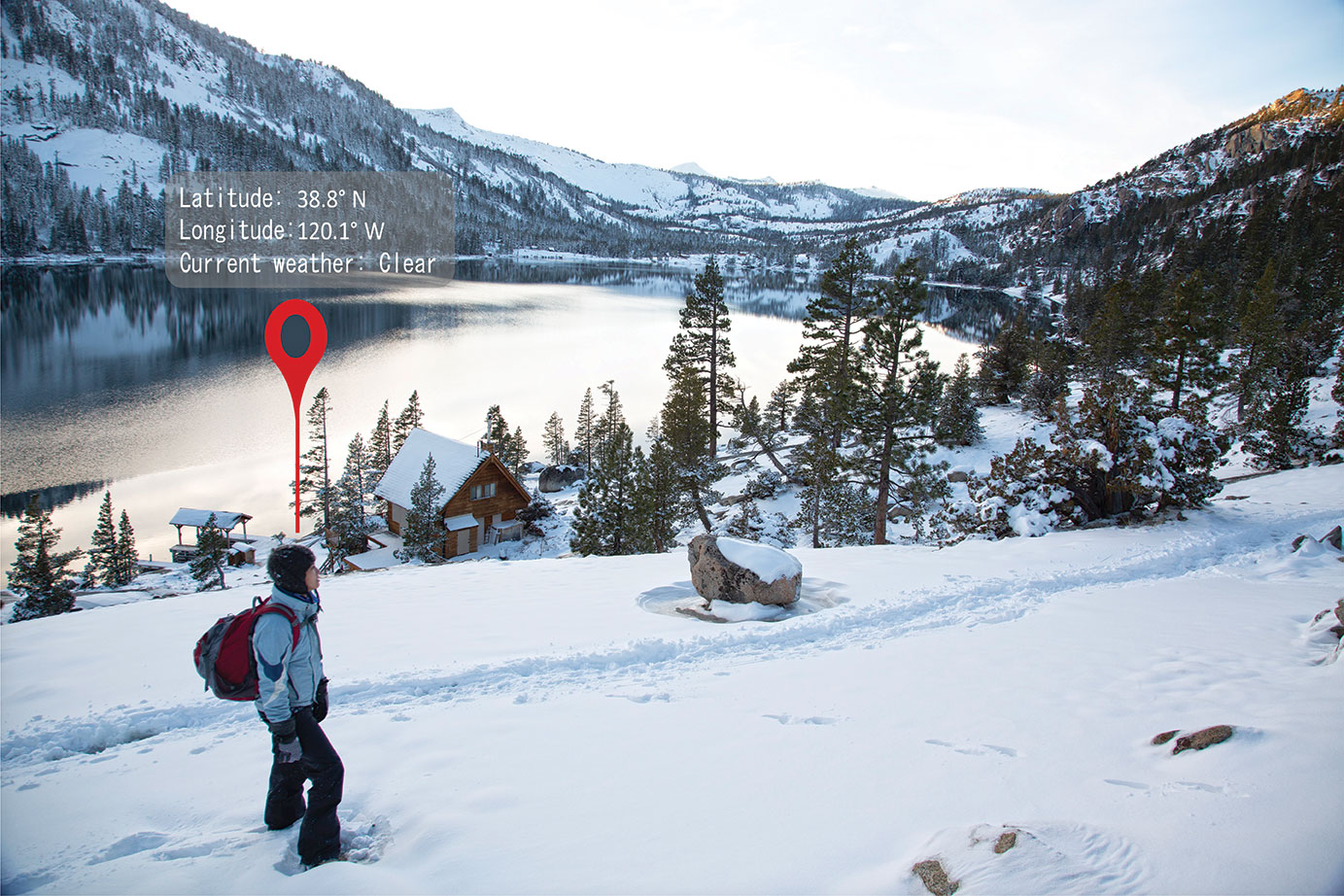 Citizen science info about the environment can be made anywhere, even when there’s nothing exciting about the weather, photo courtesy Gareth Blakemore

As Tahoe experiences wilder weather variation, citizens are key to documenting the changes

Scientists studying Sierra Nevada weather rely on modeling and readouts from monitoring stations sprinkled throughout the vast Sierra Nevada range. But recently they have been cultivating a powerful news source of data—thousands of citizen scientists eager to contribute their observations to climate projects.

As mountain climates experience more dramatic swings—from season to season, slope to slope, and snow to rain—these citizen eyes are more important than ever.

These efforts contribute valuable scientific data to ongoing weather studies while also connecting citizens more deeply to the landscape. In other words, citizen scientist involvement in research expands the field sampling capabilities of scientists and helps stretch resources while promoting education and scientific literacy in the community.

Variability best describes our weather and climate in the Sierra Nevada. There’s a reason why local residents have been known to say, “If you don’t like the weather, wait a day.” Variability in temperature, precipitation and snowfall occurs over time periods ranging from days to entire seasons. This variability also operates in a spatial sense—not just between different mountain regions, but across elevations and even between individual slopes and valleys.

While the Sierra Nevada has always been subject to variable winters, recent years have shattered records and upended our expectations of just how extreme weather and climate can get. Consider the historically warm and dry winters of 2014 and 2015. After a near-normal season in 2016—which did not live up to its ill-informed El Niño expectations—the winter of 2017 set precipitation records throughout Northern California. This memorable winter included both damaging rain-on-snow events and sustained periods of heavy snowfall (remember #Januburied?).

More recently, the exceptionally dry December through February of 2018 had an even worse snowpack than 2015 before “Miracle March” rescued the season. Winter 2019 provided near-perfection. A similar spring miracle to 2018 occurred in 2020. While December provided a magnificent start to the ski season, it was followed by persistent drought in January and February before a handful of late-season storms saved the spring.

These recent hydroclimate extremes—notably the boom-and-bust variability in precipitation—are superimposed with increasing temperatures and rising elevations of the snow line during storms. Together, these factors result in shorter ski seasons that take longer to begin, end earlier and often lack the consistently awesome conditions of decades past.

All of these observations are consistent with expectations of a warming earth. Most importantly, these events demonstrate our vulnerability to the impacts of global environmental change at the local level.

The mountain ecosystems providing us with places to live and play are adapting poorly, if at all, to the rapid rates of change. We now bear witness to dramatic changes occurring before our eyes. At times, change occurs quickly and catastrophically, as in the cases of extreme fire behavior, flood events and tree mortality. In other cases, change is subtle and creeping, as in the upslope march of the rain-snow transition elevation.

Simultaneously, an ever-increasing number of people visit and enjoy the opportunities provided by the mountains.

As our mountains become more heavily impacted by human use and environmental change, developing adaptation strategies and management plans to increase the resiliency of the region and achieve land management goals are critical. To ensure successful outcomes, these strategies depend on quantifying how large, fast and extensively changes are taking place, as well as where they are occurring. 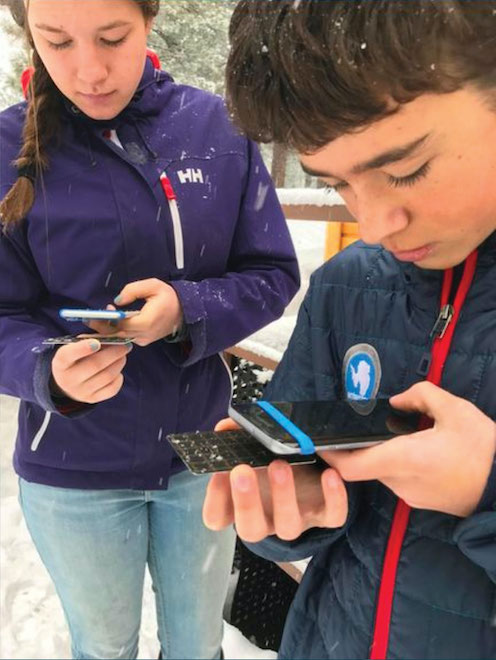 Students observe falling dendrites with light rime as part of Stories in the Snow, courtesy photo

Lake Tahoe’s oldest winter-focused citizen science effort is called Stories in the Snow, launched by the Desert Research Institute in 2016.

The project allows users to combine photography with a love of snowflakes by submitting close-up photos of freshly fallen flakes. These observations help evaluate the local atmospheric conditions creating the myriad crystal forms we see throughout winter storms. Examining how the crystal forms of falling snow evolve over the course of a storm provides valuable insight into the formation of potential weak layers in the snowpack, ultimately influencing avalanche hazard.

An immediately visible way to see how weather variability operates through space and time in mountains is by observing the elevation that precipitation changes from snow to rain. Although scientific instruments ranging from weather stations to radar and even satellites can measure this change, visual observations remain the most effective observation technique in mountain regions.

To meet this need, the Desert Research Institute launched Tahoe Rain or Snow on the Citizen Science Tahoe mobile app in 2019. The project allows community members to answer the question, “Is it raining or snowing where I am right now?” in less than a minute. The information is then used to evaluate how the snowpack changes as a result of precipitation phase and how quickly the rain-snow transition elevation is rising as the climate warms.

Both of these goals enhance our capability to evaluate past, current and projected change in the mountain environment. As we become better at correctly capturing the distribution of snowpack, or how the rain-snow elevation varied during past events, we increase our confidence in projecting these changes into the future. These projections allow evaluations of how winters may look in 2030 or 2050 and provide motivation for targeted improvements in land management, such as increasing parking availability and access to high-elevation trailheads where snow is more consistent. At more relevant timescales for our snow enjoyment, this information is used to improve weather model forecasting capabilities.

Working Toward a Snow Satellite

A longer-term goal, supported in particular by the snow depth observations taken by CSO, is to design and launch a satellite to accurately measure snow every day across the globe. Such data will be used to generate more reliable estimates of how much snowpack is in the mountains. In turn, this will improve forecasts of spring and summer runoff, helping us achieve water management goals even as the climate changes and population grows. 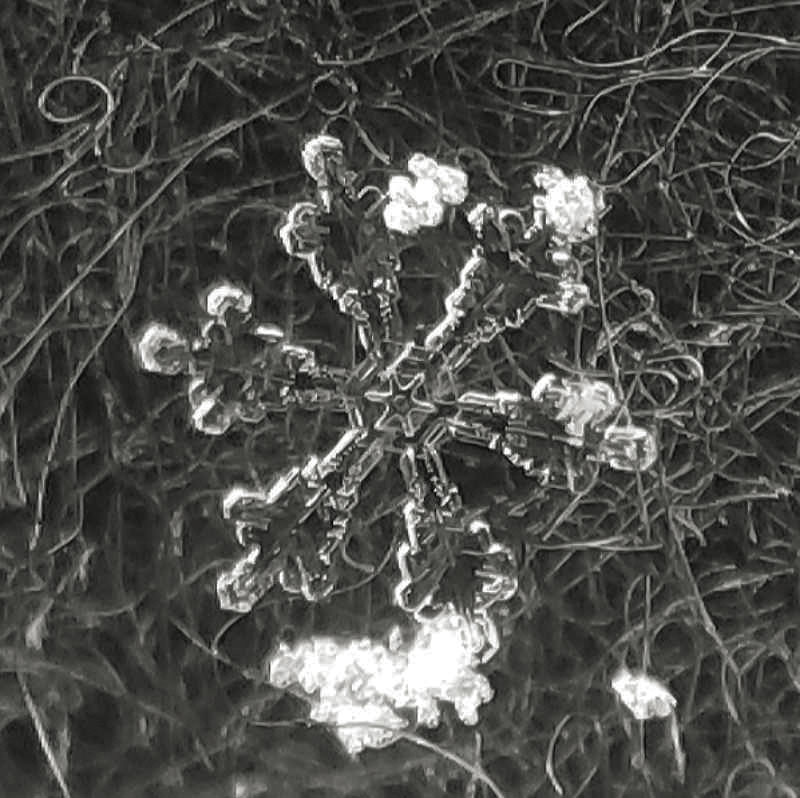 The snow-sensing satellite might be a few years off, but for the mountain enthusiast, paying attention to snow crystal shape and size as well as snow depth have immediate benefits.

Changes in atmospheric conditions, such as temperature, wind and humidity during storms, directly influences avalanche hazard and snow quality. Nobody likes weak layers or touchy wind slabs, but these problems require management in the backcountry. Observing how snow crystals change through time informs us of potential weak layer formation in the new storm snow. Snow depth measurements taken frequently in the same place help relate broader weather patterns to snowpack gains or losses.

Shallower snowpacks tend to be weaker and more prone to facet formation, increasing avalanche hazard. Confidence in snow depth improves our judgement of risks inherent with early-season conditions. Knowing the elevation of the rain-snow transition during a storm helps one find decent snow while their friends ride the lift in rain gear.

Consider participating in citizen science this winter and enhancing your own appreciation of the winter landscape and our scientific understanding of it. Participating in these projects may further improve your own situational awareness regarding snow and avalanche conditions, which translates to higher-quality skiing, riding or wandering with less unintended sketchiness.

To find out more or to sign up and join the fun, visit any of the citizen science websites or contact the Desert Research Institute directly. When else can you say that you helped develop a satellite or improve a weather model by going skiing?

Benjamin Hatchett, Ph.D., is an assistant research professor in the Division of Atmospheric Sciences at the Desert Research Institute in Reno. His colleagues who founded and maintain these citizen science programs, including Meghan Collins, Monica Arienzo, Keith Jennings, Eric Holmes and David Hill, contributed to this article.