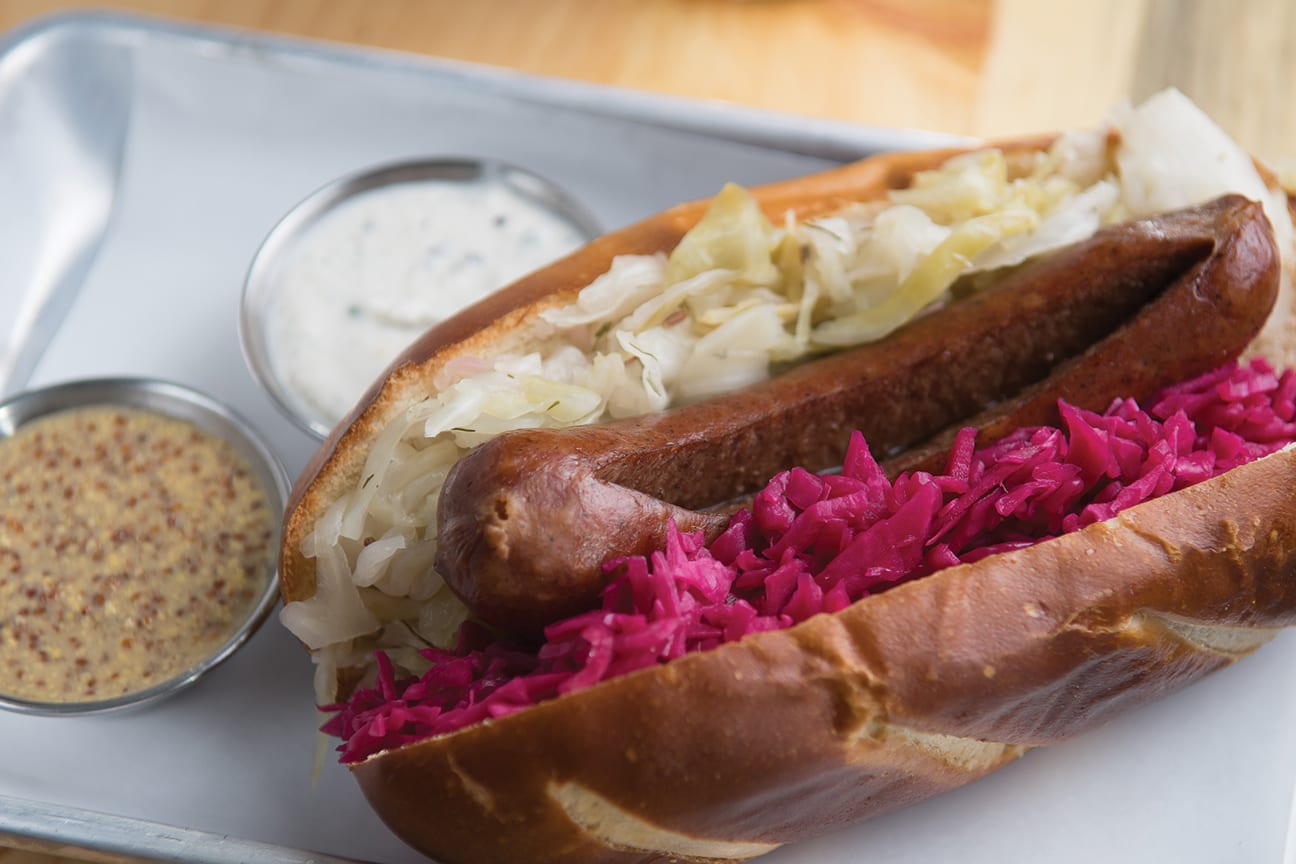 Celebrated restaurateur Michael Mina’s MINA group, which operates over 40 properties across the country, is opening this casual version of his Bourbon Steak concept in the village at Northstar California’s former Tavern 6330. With locations at Levi’s Stadium and San Francisco International Airport, this spot will also focus on upscale pub food with starters such as truffled tater tots, cheddar brats wrapped in puff pastry with jalapeño mustard, and entrées including al pastor pork ribs, mesquite grilled steaks and fennel-stuffed salmon. L, D

Brought to you by the Truckee Tavern & Grill folks, this spot formerly occupied by Marg’s Taco Bistro sports a bit of a split personality with two spaces and cuisines that take cues from Mexico and Japan in food and decor. Executive chef Nathan Lapating, who moved down the street from the Truckee Tavern & Grill, oversees the menu that ranges from street tacos and ancho coffee pork loin to seared ahi tuna and ramen bowls. L, D; $11–$21

THE PUB AT DONNER LAKE

Truckee natives Chris and Denelle White renovated and launched this log cabin at the west end of Donner Lake that was first a Mel’s Diner then White’s Donner Lake Realty. Chef Brody Dwyer’s seasonal menu is focused on pub grub including burgers, brats, beef bourguignon–inspired chili, fish and chips, ribs, and the 16-ounce Donner Summit ribeye finished with cognac rosemary demi-glace. Ambitious cocktails include the rye-based Old 40 Fashioned, which is smoked on a cedar plank and poured tableside. L, D; $17–$45

Eduardo Diaz de Leon, who has studied law in his native Mexico and culinary arts in Vancouver, opened this modern takeout spot adjacent to Smokey’s Kitchen. The menu meanders across cultures with items such as the Mexican torta with carnitas salsa verde and beans, the American buttermilk fried chicken and coleslaw on brioche, and the Lebanese lamb, harissa and mint yogurt on a ciabatta roll. The menu also includes barbecued ribs, quinoa bowls, soups, salads and seasonal additions, which they pack in compostable boxes or in patrons’ own containers. B, L, D; prices vary

Kevin Drake and Rich Romo, locals who launched their first microbrewery in Incline and a second pub in Truckee, have completely remodeled and re-invented the 3,500-square-foot former Hacienda de la Sierra, which closed after a 32-year run. A three-sided wood-and-stone bar and outdoor beer garden are rigged to serve 22 Alibi brews on draft as well as cider, wine, nitro coffee and kombucha. Chef Aaron Zendner’s evolving menu includes items like a veggie Mediterranean mezze board, seared albacore poke, cured salmon toast and beer-braised bratwurst. There’s a stage for live music and space for a dance floor; minors are permitted until 9 p.m. most nights; furry friends must stay home. L, D; $11–$17

This family-friendly eatery with a bright beachy vibe at the Village at Heavenly sells tasty sandwiches made from freshly baked bread and premium ingredients sliced daily. The menu includes breakfast bagel sandwiches in the morning followed by sandos like roast beef with bacon, caramelized onion, roasted bell pepper, arugula, garlic aioli, brie and balsamic reduction on a sourdough roll. There’s a full bar and outdoor seating. B, L, D; $10.99–$13.99

Martin and Nash Mariani launched this Ski Run Marina spot after selling out of the handmade traditional Argentine pastries at farmers markets for the past nine years. The small menu features savory selections such as ground beef with sautéed onions, bell peppers, boiled eggs and the vegetarian diced eggplant, mushrooms, onions, bell peppers and sun-dried tomatoes. For something sweet try the apple, brown sugar and cinnamon. L, D; $4.75

South Lake Tahoe native Jared Marquez, who launched his roasting operation in 2015, added a retail outlet inside Blue Granite Climbing Gym with his sister and business partner Destiny Marquez. Coffee drinks feature their Adventurous and Familiar series of beans, and there are also smoothies like the climbing-inspired “I Love Crack” made with nutella, cold brew coffee, ice cream and milk, as well as breakfast and chicken burritos from Verde Mexican Rotisserie. L, D; $3–$7

Inside the hotel lobby of the Beach Retreat & Lodge, this log cabin–styled sports bar is decked out with plenty of TV screens to catch the game and a compact menu with bar food eats such as steak chili, grilled or blackened chicken or mahi mahi tacos, Buffalo fried chicken Caesar wrap, grilled chicken quesadilla, plus sandos like the South Shore Club made with sliced smoked ham and turkey, applewood smoked bacon, lettuce, tomato, onion and pesto aioli on sourdough bread. B, L, D; $11–$13

Located in South Reno’s Sierra Meadows Plaza, which is also home to Bistro 7, this counter-service deli allows you to build your own sando or order one of the locally named selections made with Boar’s Head meats. The Virginia is made with Virginia ham, salami, cheddar and garlic pesto on a soft roll, and the Kietzke comes with London broil roast beef, cheddar and horseradish cream sauce on Dutch crunch. A couple of salads and local beers are also available, as well as online ordering. L, D; $7.95–9.95

CHICAGO’S PIZZA WITH A TWIST

A pair of these franchised pizzerias opened recently, tossing both traditional pies as well as those with Indian-inspired toppings on a thin-crust base (not to be confused with Chicago deep dish). Selections include tikka, tandoori, curry and butter chicken, paneer, lamb kebab and curried veggies as well as a naan-style option. In addition to calzones, there are samosas, pakora, pasta, salads, barbecue and tandoori wings, as well as desserts hewing both East and West. Online ordering available. L, D; $9.99–$28.99

This coffee shop plays up its location at the corner of Court Street, across from Reno’s Justice and District courts: Faux mugshots line the walls and the small menu brandishes names like Jane Doe waffle (which can be gussied up with a trip to the waffle topping bar), the Sticky Situation chicken quesadilla with avocado and the Hot Felon, which is sautéed chicken and simmered peppers. There are also house-baked pastries, local produce and a long list of coffee drinks. B, L; $4.20–$10.99

The former 1907 building that was the Lincoln Lodge located across from the Depot Craft Distillery is now a boutique inn, The Jesse, which takes its name from Jesse Lee Reno, the Union general for whom the city is named. Its sleek lounge serves coffee and pastries in the morning courtesy of Old World Coffee and Coffeebar Reno, and later in the day noted local mixologist Ilona Smith works her magic behind the bar.

Also part of The Jesse, this 10-seat, hip, modern cantina in the brick building that was a Hub Coffee roastery is run by Chef Harrison Cooper, a veteran of San Francisco’s award-winning State Bird Provisions. His take on street tacos include carne asada with queso fresco, local micro greens and salsa de arbol and al pastor with adobo, pineapple and guajillo pepper. The smoked mushroom employs pine nuts, micro radish and salsa morita made with smoke-dried jalapeños. Sip on a smoky mezcal straight or in a cocktail. D; $5.50–$7

Sadie Bonette and Ivan Fontana, owners of Death & Taxes, Midtown Tacos and Midtown Eats, have converted this former space that was home to many a java joint into an exposed brick Italian-themed cocktail bar, complete with red Campari umbrella dotted patio. Colorful creative concoctions that go far beyond the spritz are garnished with rose petals, fresh herbs and citrus peel. Open nightly at 5 p.m.

T. Duncan Mitchell, who owns Chapel Tavern, opened this German-themed destination in an airy renovated transmission garage with roll-up windows that open onto the beer garden, a portrait of the Prussian statesman painted by local artist Jaxson Northon presiding over all. The small seasonal family-style menu includes housemade pretzels with mustard, rye pancakes and grilled trout with fresh quark and sour apple, pork chop with fresh grated horseradish, bone-in elk schnitzel, mussels with crispy bratwurst and spicy garlic oil. To drink, there are a dozen German beers are on tap, and smallish German production wines. D; $16–$36

This is the fifth location for this local java operation (the first one opened on Mount Rose Street in 2003), which moved into the West Street Market downtown in the former Icecycle Creamery space. All the familiar coffee drinks made with freshly roasted beans are here, plus a cold brew bar with nitro cold brew on tap, and an assortment of baked goods including baklava, bagels, coffee cake, quiche, scones, waffles and house-made gelato. B, L

Find the grey metal back door marked “For Deliveries Only” in the alley behind this faux storefront that was for decades an army surplus store, and step into a 1920s-style speakeasy launched by Zachary Cage, part owner in Brewer’s Cabinet, Ole Bridge Pub and Sierra Tap House. The century-old building’s interior was sandblasted to reveal original brick walls and its pressed tin ceiling preserved; a marble-topped cherry bar, fresh wood flooring, booths with privacy curtains and stage for live music complete the retro look. To drink: a dozen beers on tap, many more in bottles, wines by the glass and cocktails like the Mahogany Manhattan spiked with chocolate, cherry and raspberry. Open 3–10 p.m. nightly

Set In the Aspen Glen Shopping center at the corner of Los Altos Parkway, this is the second Reno location for the family-run Indian eatery (the other is on Double R Boulevard in South Reno, while the original is in Santa Clara). The lengthy menu covers a wide swath of Indian culinary styles including curries, dosas, biriyani, tandoori and a handful of Chinese wok dishes brought to Calcutta by Manchurian immigrants. Online ordering is available. L, D; $8.99–$14