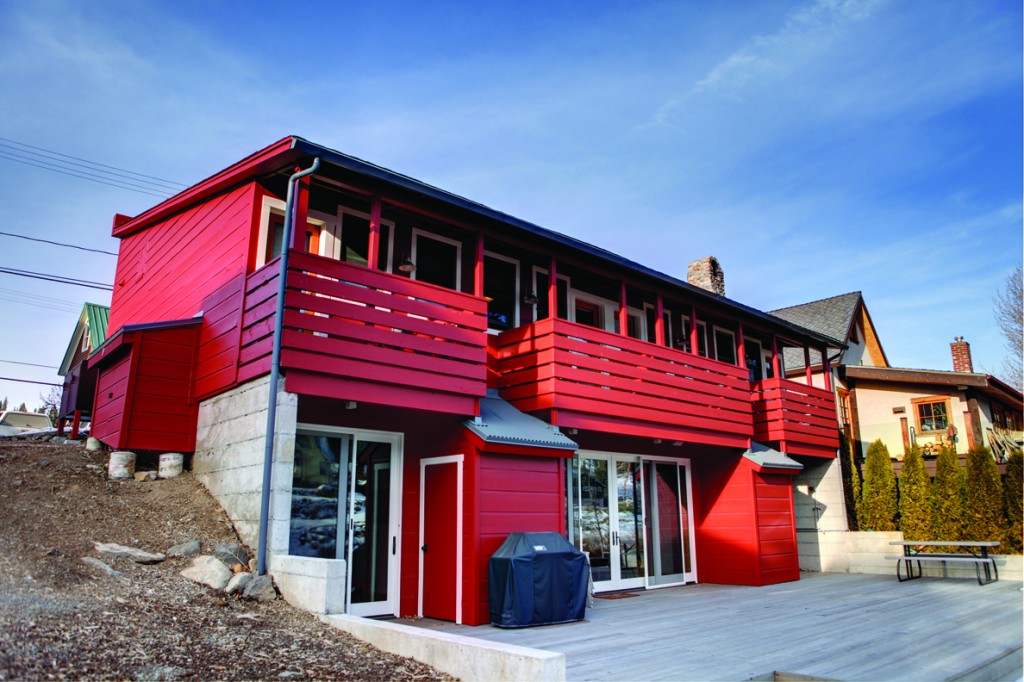 in Mountain Home Awards 2012 | Mountain Homes | Written by Vangela Wightman and Photography by Submitted
In the late 1930s, when downtown Truckee still had evidence of the Wild West tucked in its pockets, a small one-level, four-plex apartment was built on the north shore of the Truckee River. Basking in the neon glow of the Hillside Lodge sign, the Riverside Drive residence offered workforce housing to men employed in various blue-collar industries.

Seventy-some years later, San Francisco residents Julie Guamotta and Margaret Healey found themselves well into year two of looking for downtown property when the somewhat ramshackle but fully occupied and functional building came on the mar­ket. ”We wanted to be within walking distance of downtown and be where people lived full time and there was life,” says Healey. “But the whole focus is the river. We made an offer the same day we found it.”

Healey and Guamotta hired Kurt Reinkens of Truckee’s MWA Architects to aid in what they initially thought would be a reorganization of interior spaces and a gussying up of the exterior. But as options were considered for creating an owner’s apartment while maintaining rental units, realistic choices were limited. Guamotta remembers standing on the south side of the building pondering the variables and asking, “Why don’t we dig out the bottom and create some space down there?” The suggestion to capture existing crawl space volume turned the project completely around.

“The owner’s vision of putting living space below the four-plex was the key to the project,” says Paul Combs, superintendent for Mt. Lincoln Construction. With 34 years in the construction industry, Combs is no stranger to working in the Downtown Historical district, nor is Reinkens, who developed the design and assembled necessary documents for presentation to Truckee’s Historical Preservation Advisory Commission (HPAC).

As described by Combs, Healey and Guarnotta are “serial remodelers” and have renovated several projects, some in historic districts elsewhere, and were stunned at how effortless the process was. “The Town of Truckee was surprisingly easy to work with,” says Healey.

Using temporary steel beam supports, Mt. Lincoln Construction rolled the building off the spot it had rested sans foundation for decades and worked diligently to complete the excavation process, then build a foundation so the house could come home to nest, so to speak. The general challenge of mov- ing an entire building around like a Monopoly hotel piece was compounded by the reality of the narrow, one-way street with essentially zero space available for staging, utility lines running directly in front of the structure and the always-present Threat of the Unknown, existing in all remodel projects.

“We were ready to run into something really ugly in the process, and what amazed me was how well it all ended up going,” says Reinkens.

Standing one foot higher on a brand-new foundation, the building maintains the scale of a utility shed and the fresh, fancy coat of red paint does little to alter the unobtrusive, utilitarian stance. The red color is believed to replicate the building’s original color, but as a Cal grad, Healey was very clear the trim must be white, and not the classic Union Pacific gold occasionally found on Truckee’s historic buildings. “Red and gold are USC’s colors and I just couldn’t do that,” she says with a sly smile.

“I grew up in an Eichler home in Palo Alto,” says Healey, “I wanted modern living and a real indoor/outdoor connection.” Healey and Guarnotta respond swiftly when asked what their favorite space is in the refaced retreat. “Right outside on the deck,” says Healey, gazing through the generous window wall to the river beyond.

Reinkens refers to the riverfront deck area as an amazing social pavilion. “As soon as you open the doors to the deck, you are transported… the river and its beauty just dominate the experience.” One feels the full tranquility and restorative capacity of this riverside locale.

The overall success of this remodel, inside and out, is its blending of historic Truckee with a modern vision for mountain design. In creating it, the team involved gave a foundation not only to this building but to the continuing evolution of Truckee-style living and architecture.