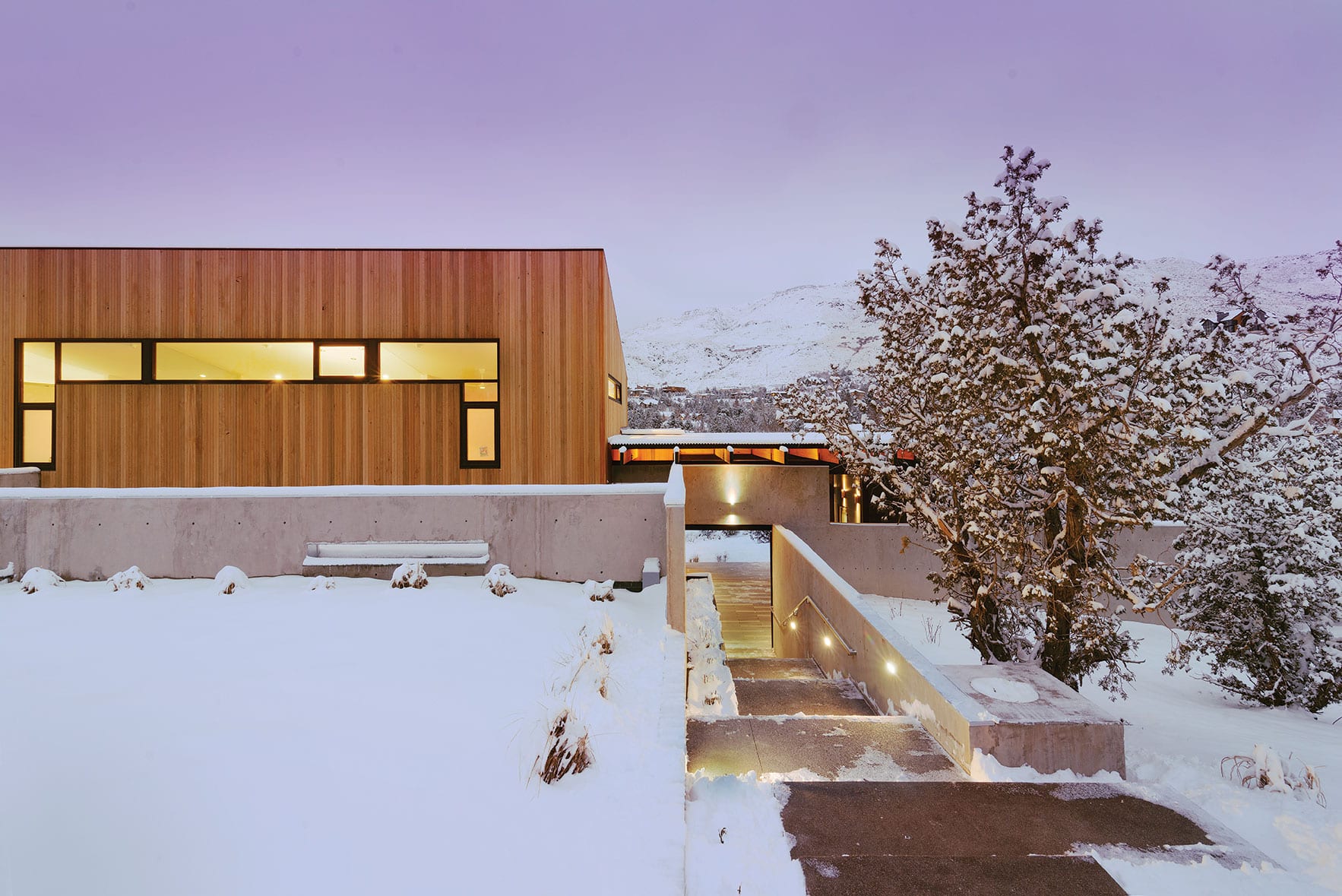 Designed by architect Jack Hawkins, this modern home fits seamlessly into a west Reno neighborhood dominated by houses from the 1970s and ’80s, photo by Asa Gilmore

Many of the homes found in well-established west Reno neighborhoods have been in place for decades, the aesthetic mix varying between classic ranch houses, stucco-clad high-desert spreads with a touch of Mission detailing, and the familiar mish-mash of forms and materials that generally make up an American housing development.

Reno architect Jack Hawkins designed a fresh-faced, twenty-first century modern home and stealthily stitched it in among its older 1970s and ’80s brethren. And, if you don’t know where to look, you won’t even know it’s there.

“It’s a really eclectic neighborhood and, for Reno, the site has quite a bit of fall,” says Hawkins. “But what these owners love about the lot is that as you drop down off the street, it becomes pretty private and you can’t really see any neighbors.” The home features an expansive backyard that is surprisingly private, photo by Asa Gilmore

The opportunity to slip into such an established neighborhood and build from the ground up presented itself when a 3-plus-acre parcel was subdivided and two new resultant lots were put on the market. Hawkins’ clients purchased both parcels, creating a curiously shaped, 2-plus-acre, downward-sloping property scattered with native conifers and shrubs and open to sun-filled southerly views across the Caughlin Ranch area.

“That’s the great thing about this house: From street level most of the house is concealed. It’s nestled into the sloping hillside with all of the focus on the fantastic views out the back of the house,” says general contractor Darin Murphy of Reno’s Murphy Built Construction. “No one even knew what was going on the whole time we were building it, and from the street view the house melds beautifully into the natural Nevada landscape, creating a hidden gem.”

The young couple, who have a 6-year-old son and 4-year-old daughter, have been in their new home a little over a year and enthusiastically agree that the house is everything they wanted. While the husband grew up in the Bay Area, the wife is a Reno native, and the couple say they had a clear vision of their ideal home when they returned to Reno to start a family.

“We wanted privacy and we wanted the house to be modern, but not ‘museum’ modern,” says the owner, who wishes to remain anonymous. “We toured Jack’s personal home and saw that we were definitely on the same page, design-wise.” South-facing views across Caughlin Ranch are framed through floor-to-ceiling glazing in the great room, photo by Asa Gilmore

Their program included a residence with separate guest quarters, a four-car garage and a 1,350-square-foot standalone workshop. “How can you maximize privacy, get a vehicle down to the home and put a separate workshop on the site without building 2 miles of road and destroying the property in the process?” asks Hawkins. “The topography drove the whole project, in terms of berming it into the hill and letting the master suite cantilever out over the southern edge.”

With major southerly views, the steel-frame house is benched in behind a substantial 12-foot concrete retaining wall; stepped landscaping pockets organized on the northern, uphill slope of the site further intensify the camouflage.

Public entry to the residence begins at a guest parking pad up near street level and steps downhill via a processional descent between panel-formed concrete site walls lined with recessed lights and planters. Through an opening in the full-height site wall at the bottom of the exterior stairway, an expansive covered terrace area opens to southern views and is defined by the main house on one side and the guesthouse on the other. A linear fire pit finished in dark stone organizes the outdoor living area, and a huge barn door slides on an exposed steel structure to close the terrace from the entry steps—important for containing small kids at play and maintaining privacy from the street.

Through the front door, the great room opens up along the south-facing wall. The warm wood tones of exposed glulam beams and 1-by-6-inch Douglas fir roof decking balance with the colder tones of exposed black steel structure, concrete floor and an aluminum storefront window system. The concrete floor is ground down to expose the aggregate and polished to enhance resultant colors. “I wasn’t sold on concrete, but now I love this floor,” says the owner. “It’s beautiful.”

The solar exposure on the concrete floor functions as a heat sink to provide passive solar gain in colder months. On a 40-degree day in December, the great room will easily exceed 75 degrees sans mechanical heating system. The owners hired Reno lighting designer Lee Harris of Light + Space to design the home’s lighting layout and create subtle but positive impacts to bring out the best of the home’s spaces. “We get a lot of compliments on the lighting and Lee’s expertise makes a real difference,” says the owner.

Silestone countertop surfaces and crisp, rift-cut cherry casework hide every appliance, leaving a clutter-free, barely-there kitchen. But to pull off the owner’s request for something so sleek yet highly functional and supremely organized, Hawkins says, “You’ve got to have some back-of-house.”

A long, linear pantry/laundry/storage room—the so-called “back of house”—shares the beautiful, clean aesthetic of the easily accessed kitchen. Lining both sides of the room, intricately organized built-in casework, including vertical pullout pantries, is faced with cherry veneer, and the clean, modern vista down the length of the space doesn’t seem exactly “back of house.”

“This mudroom area was a big one for me,” says the owner. “Rather than have a separate laundry room and separate pantry and a bunch of little closets, we have this one open area back here. We like everything to look neat and clean, but it’s especially nice to be able to hide the clutter and still have everything super accessible and convenient.”

A small drop zone for keys, purses and backpacks link the kitchen and pantry zone with the attached four-car garage, its mass almost entirely buried by the hillside. “Making the garage disappear is always a design goal for me,” says Hawkins.

Extending from the main mass of the home to cantilever above grade, the master bedroom suite is expressed on the exterior as somewhat of an architectural punctuation, emphasized by its standout Galvalume finish. Recessed into the south end, the master deck is defined by vertical steel bars that cast ever-moving shadows while additionally functioning as a simple and sculptural railing. The master suite and its sculptural railing cantilever above grade, photo by Asa Gilmore

Barely removed from the great room area and yet surprisingly private, the master suite is a showcase for the detailing and thoughtful design Hawkins’ projects are riddled with. High windows above the long, east-facing vanity flood the bright white bathroom with morning sun but maintain absolute privacy. A vertical strip of plain glazing in the frosted glass wall between bed and bath spaces adds interest and aligns with the simple tub fixture and single recessed light above—reinforcing a sense of intension, but being just a little bit fun at the same time.

A 12-gauge sheet of perforated steel, folded and then welded to exposed steel stringers, morphs into a most unique run of stairs. Thin steel rods extend vertically on the open side of the stair, creating a screen and counterpoint to the sculptural steps.

“We were trying to use a material that’s fairly translucent because there’s a glass door to the east of the stair and we wanted to let the light through so when you are in the living room, the stair becomes transparent,” says Hawkins.

At the top of the stairs, two identical bedroom suites with a shared playroom in between is the exclusive property of the children. Finishes and fixtures such as carpet tiles and IKEA plumbing hardware were deliberately selected with cost consciousness in mind. Hawkins employed open interior glazing high above and between the rooms and thoughtfully located windows on both the north and south walls to give the upper-level rooms an openness and saturation of daylight that significantly elevates the perceived quality of the spaces. In the master bathroom, high windows above a long vanity flood the bright white space with morning sun but also maintain privacy, photo by Asa Gilmore

Hawkins’ architectural style is born from the clean lines and material purity of modernism, but with a sophisticated undercurrent of fun. For example, the playful asymmetry of the living room fireplace wall—a backdrop of black steel plates hosting the fireplace and television—is created by extending the concrete hearth to create a bench that sits in front of floor-to-ceiling glazing; thick blades of plate steel cantilever off the face to create small shelves. The resulting composition is interesting and the materials in Hawkins’ seemingly preferred palette—wood, steel, concrete, glass—engage in overlapping forms, juxtaposed in unexpected ways.

Estimating that they’ve done 10 to 12 projects together in the past, Murphy says that Hawkins’ designs are challenging in the best way possible.

“It’s never the same ol’ same ol’ with Jack, and that is the difficult but also the fun part of working with him. When we build projects together, we are always asking ourselves, ‘How can we make this detail work so that it ends up as designed and still affordable?’ I have to make the owner and the architect happy to ensure everyone gets the outcome they want.”

Murphy is a fourth-generation Reno native and general contracting is a family business. His father and uncle started Murphy Brothers Construction decades ago and did dozens, if not hundreds, of small commercial projects in the Reno and Carson areas. Murphy broke off from his father’s business in 1996 and did his first custom home with his wife Tamra, who does interior design on some Murphy Built projects.

Murphy is a rarity in the world of custom residential construction as his business self-performs the majority of the work required on a project.

“With the exception of specialty subcontractors—electricians, plumbers, heating/cooling—we do everything else ourselves from start to finish,” says Murphy. “I work with a close-knit group and only take on what we can handle. It’s more fun and so much more satisfying when we’re all done.”

Murphy’s penchant for self-performing the majority of tasks means flexibility in construction options and a more affordable bottom line. The affable and low-key Hawkins, a native of Missouri, has been in Reno since 1989 and has had a front-row seat watching the evolution of Reno’s residential architecture scene.

“I couldn’t have done this house 20 years ago. Now the pendulum has swung,” he says. “Reno is changing and the people moving in are interested in better architecture and better design.”

While the local rabbits, deer and occasional bobcat freely meander around the property, fully able to enjoy the new modern addition to their neighborhood, the quiet presence of their site-adapted home suits the owners perfectly.

“I was worried when we first started talking with Jack about doing a modern house because modern can sometimes feel cold,” says the owner. “But the way the house is designed, everything feels warm. It feels like home to me.”