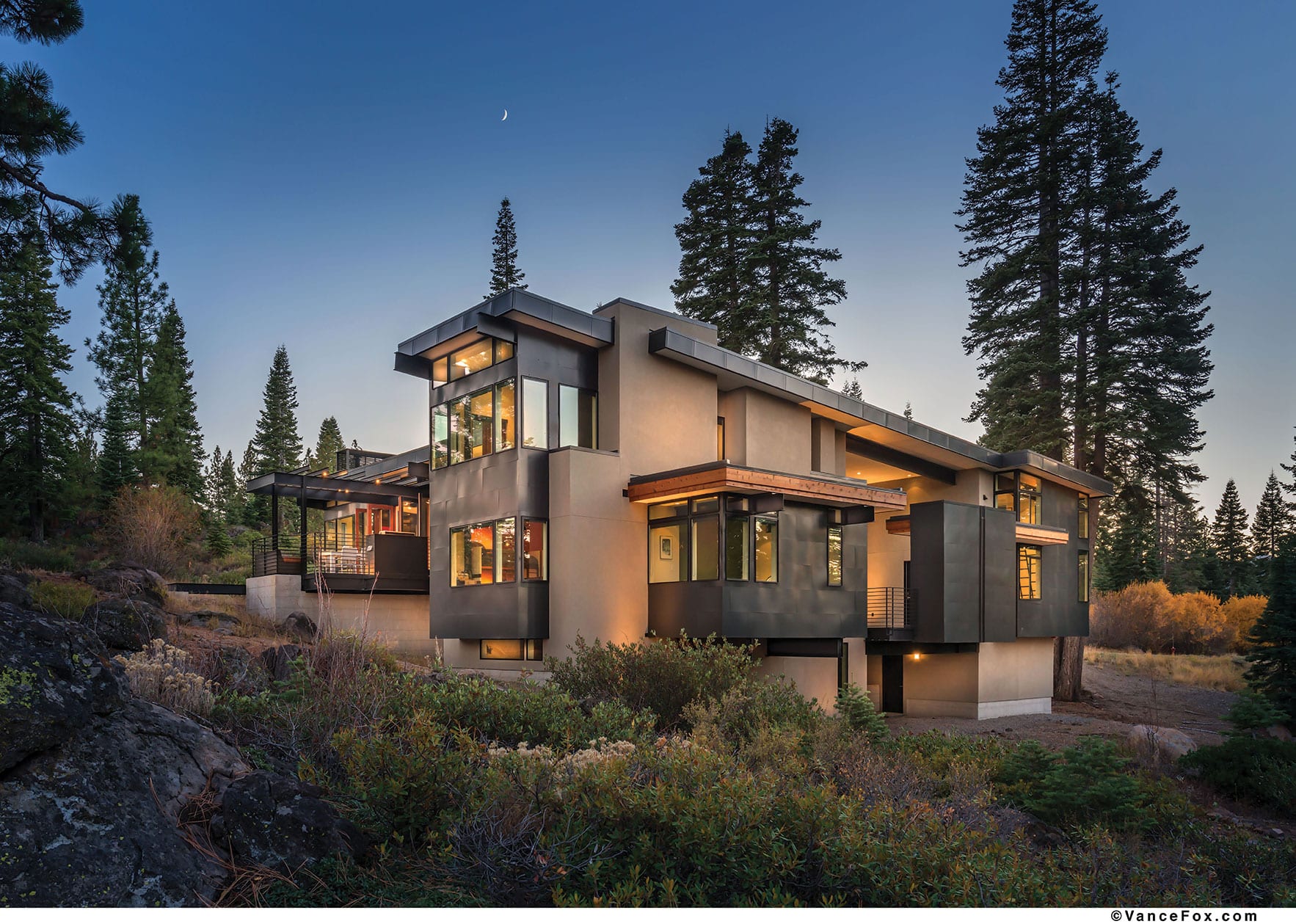 Located on Truckee’s historic Hilltop property, this modern home is an assembly of geometric forms beneath a few low-slope shed roofs, photo by Vance Fox

When speaking of how and where the modern ski experience was born, Truckee’s Hilltop region glows with a folkloric quality. The first mechanical ski lift in the nation was erected on these relatively modest slopes in the early 1900s, and even today, some of those original lift towers remain standing as a reminder of how it all began.

One of the old towers sits rather poetically on the property of a San Francisco family with such a love of all things “outdoor living”—skiing in particular—the letters SNIRT hang on the living room wall of their Hilltop home.

“These owners ski more than locals do,” says architect Joel Sherman, owner of Truckee-based jls design. “If they’re up here, they’d rather be out skiing. Or hiking. Or biking.” Exterior finishes of board-formed concrete, cement board, stucco and metal panels were selected primarily for durability but also express the material language of the architecture, photo by Vance Fox

Sherman’s work caught the attention of the owners (who wish to remain anonymous) when their Tahoe Donner ski lease brought them into adjacency with a modern home that Sherman designed dubbed the Stal Tre Hus project.

“We saw Stal Tre Hus and thought, ‘Wow! You can build something like that, something modern, up here?’ So we reached out to Joel,” says one of the owners.

Working professionals with two sons, ages 9 and 11, both owners are native Canadians, and their love and commitment to winter sports is hardwired into their maple-leafed DNA. Photos of San Jose Sharks players with one of their sons line the lower-level TV/foosball room, and huge, spectacular reproductions of Squaw Valley and Tahoe Donner Cross Country ski maps hang just outside a dedicated ski-tuning room, the smell of hot wax permeating the space.

“In the winter, we are up here every weekend and over the Christmas holiday,” says the owner. “The house doesn’t sit empty.”

The owners purchased the dynamic 5-acre Hilltop property in 2007 after an “Ah ha!” moment attending a summertime Tahoe wedding. “We had only ever been up here to ski, so it was an eye-opening experience to be in Tahoe during the summer. We left the wedding and went driving around looking for land.”

The small Hilltop development includes only a handful of sites, but the available view corridors pack an outrageous visual punch. The Carson Range and entire Martis Valley is wide open to the east, glimmering lights and Truckee’s bustling energy sparkle off to the north and huge Sierra sunsets are audaciously presented from the west like a massive drive-in movie screen. It’s almost too good to be true.

“We knew this was the property we’d been looking for,” says the owner. The home features views to the Carson Range and entire Martis Valley to the east, photo by Vance Fox

The roughly 3,300-square-foot home built on this magical parcel is an assembly of geometric forms captured beneath a few low-slope shed roofs, and the general design of the home is pure jls design: Take the challenges of the site and make them assets to the project, and then allow the structural response to become the architecture.

“By lifting the house to float above grade, the entire view of the Martis Valley becomes theirs,” says Sherman. “And I don’t have to fight hydrostatic pressure [site drainage]. It’s my language tailored around their lifestyle.”

“This is a beautiful spot with spectacular views,” says general contractor Jude Gavigan. “Joel did a great job of how the house is situated on the property. You really feel like you’re at grade in the winter when the snow fills in around the house.”

With more than a decade of high-end residential construction experience, Gavigan’s Truckee-based In House Builders focuses on sustainability and green building practices, and Gavigan calls the marriage between the owners and In House Builders “seamless.”

“The owners set the tone for the whole project,” says Gavigan. “They are in tune with the components of mountain modern style—clean lines, simple finishes—and they brought that kind of thinking to the project and we just ran with it.”

Exterior finishes—board-formed concrete, cement board, stucco, metal panels—were selected primarily for durability but also express the material language of the architecture. Vertical support towers are finished in stucco; the cantilevered, popped-out spaces are finished in glass and metal. Sherman openly professes hatred of garage-centric residential design, and in all of his projects he works to minimize the negative architectural impact of one or more almost-always huge garage doors. When the owners told him they didn’t want to have a garage, there was a cosmic meeting of the minds.

“The absence of a garage is a fantasy for me,” Sherman says with a laugh. “Being able to go with a carport broke up the house and allowed the massing to be more delicate.”

The covered carport is defined by a substantial steel grate suspended above grade and supported by extensive steel structure. The open grate allows snow to fall through, eliminating what can be a horribly laborious chore of snow removal around vehicles and clearing the parking area. The owner proudly refers to the open grate and associated structure as “our Caltrans bridge.”

The massing void that became the carport also created separation between the main house and small guesthouse, and has easy access to the bright red front door only steps away. The home employs multiple floor levels as a response to the sloping grade and to prop the house as far up on the site as possible. “I love the split level because you’re only a half flight from everything,” says Sherman. “It’s what allowed us to float the great room above grade, and it’s an easy and fun way of defining space.” Steps away from the bright red front door, a covered carport is defined by a substantial steel grate suspended above grade, which allows snow to fall through, photo by Vance Fox

Sitting at a 90-degree angle from the remaining mass of the home, hinging at the open stair, the great room (kitchen/dining/living) is wide open to the east and west. While comfortable and accommodating, it’s not massive.

“We spent a lot of time talking to Joel about what we wanted,” says the owner, “and this common space was really important. We didn’t want large bedroom suites allowing people to hang out separately the whole time they were up here; we wanted this public area to be the attraction.”

Bound on the east and west by walls of Milgard windows and Sierra Pacific doors, with a fireplace feature wall composing the south wall, the human scale of the great room quickly makes one feel at home. The concrete floor was a must for the owners to manage the “kids, dogs, chaos,” and the wide-open native landscape with toothy rock outcrops is just a quick saunter out the door and over a steel mesh connector bridge to the east.

In spite of crazy views and outrageous solar shows on the outside, it’s often the kitchen on the inside that initially grabs everyone’s attention. When asked why they selected something with such panache, the owners laugh. “Because the house was not built for resale. And it’s a ski house, so it’s allowed to be fun.”

Gloss-laminate Crystal Cabinets, finished in eye-popping “Holly Berry” red, sit in an “L” configuration and punctuate the interior experience with outrageous confidence. However, most every other room in the house has a bright accent wall—orange, blue, green—serving up additional visual surprises and introducing an undercurrent of whimsy throughout the durable simplicity of surrounding finishes. Gloss-laminate Crystal Cabinets, finished in “Holly Berry” red, sit in an “L” configuration in the kitchen, photo by Vance Fox

A small loft with a line of sight into the great room sits a half flight up and just outside the master suite. While she shares the space with about a million Legos, one owner refers to this lofty nest as her “cozy little space with a great connection to everything going on down below.” The views from the modestly sized master bedroom may be the best in the house, and the master bath is cleanly detailed and spacious but not grandiose.

All bedrooms are intentionally small and support spaces are efficient and hard-working. The mudroom offers six boot dryers, many lockers, hooks and cubbies and is successfully appointed to manage the reality of carloads of skied-out folks hanging up yards of Gore-Tex–infused fabrics to dry for the next day of action. “We just put the crazy in there and shut the door!” the owner says with a laugh.

“It is a modest home; it doesn’t have huge square footage,” says Gavigan. “The concept overall was durability, low-maintenance and longevity, and every bit of the square footage is well done and every area was thought through to the fullest.” Views from the modestly sized master bedroom may just be the best in the house, photo by Vance Fox

Across the carport, a cozy guesthouse with a glossy yellow kitchen, living and sleeping areas, and a generous loft space above provides dreamy digs for any visitor.

“Family doesn’t come just for the weekend when they’re coming from Canada,” says Sherman. “They’re staying for a while, so the guesthouse is close enough yet far enough. It’s nice for the guest, too; they don’t feel like they’re imposing. Everyone has their own space.”

Gavigan brought sustainable building concepts to the project, a component that the owners insisted on. “The owners added the solar panels to help the house be as energy-efficient as possible. And even though we have a lot of glass and steel, we did things to counter the inefficiency and get high R-values in the wall and ceiling cavities… There was a lot of technology brought into the envelope.”

Asked for impressions of their project team, the owners rave about architect and contractor alike. “Our architect is an artist and our contractor is a perfectionist. We were in absolutely capable hands with Joel during design and then we transitioned to working more with Jude during construction and worked really closely with him. When the house was finished, we said, ‘All right! Can we do this again?!’ It was a really fun process.”

The glorious views and story behind the historic lift tower made this 5-acre parcel something special long before a San Francisco family built their dream ski house on it. But experiencing the site through the aperture of the architecture seems to actually amplify what is amazing about the property. And how prophetic for this live-to-ski family, after a day of reveling in the best of twenty-first century ski technology, to come home to the very place it all started.