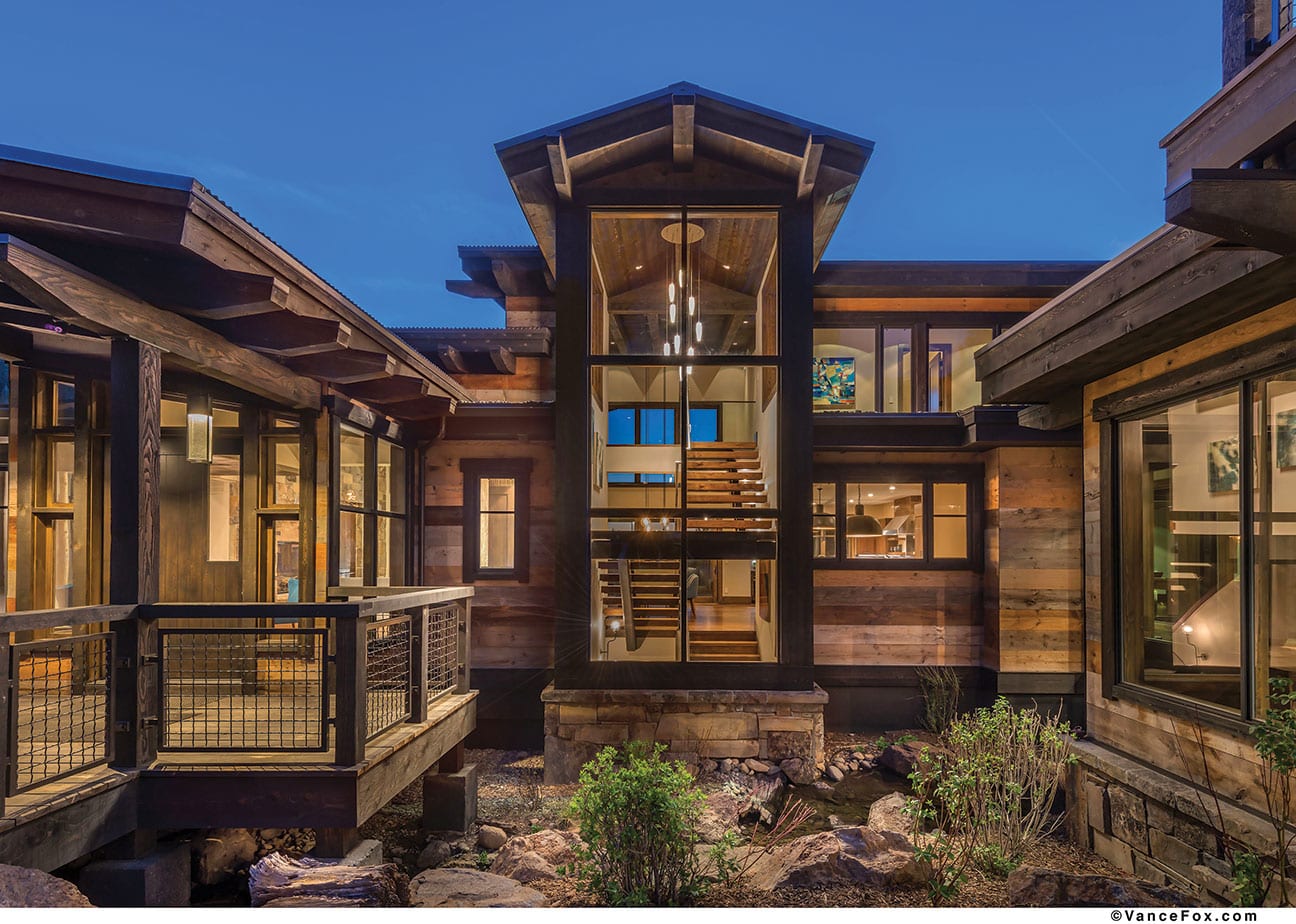 From the exterior, the three-story glass stairwell tower is meant to serve as an architectural beacon, photo by Vance Fox

As a former professional snowboarder who spent a decade on the global circuit, Mike Beallo has visited countless ski areas. “I’ve been all around the world,” he says. “There are so many amazing ski-in/ski-out communities—in Japan, South America—but Tahoe doesn’t have a lot of ski-in/ski-out.”

Beallo has been building and selling homes locally for the past 10 to 15 years. When he heard about development at Mountainside at Northstar’s Martis 25, or M25, community—“that really caught my eye,” he says. “It’s all engineered around ski-in/ski-out. That takes more time and energy and money, frankly, to engineer that kind of property.”

While he’d built houses in other parts of Tahoe, including Martis Camp, Beallo says that the ski opportunities at M25 trumped the other locations. “It was a really unique opportunity to build a home that had a great view and great access.”

He enlisted Scott Gillespie of Truckee’s SANDBOX Studio, with whom he’d collaborated on previous building projects, to design a home that centered around a snow-focused lifestyle. “What I did,” Beallo says, “was talk about what does not work in terms of floorplans.” As for the rest of the architecture, Beallo says, “I let Scott do what Scott does best.”

“As one of the first homes to go into the new ski-in/ski-out community of Martis 25, we wanted to create something that was fresh—recognizable as ‘mountain architecture,’ but more contemporary, mixing steel and contemporary fenestration with reclaimed siding and native stone, the juxtaposition of which creates a very dynamic result,” Gillespie says. Reclaimed wood covers the snow lounge, which clocks in at about 425 square feet, photo by Vance Fox

The home is structured around the concept of ski-in/ski-out, most noticeable in the lower-level snow lounge, from which the home’s skiers and riders can easily access Northstar’s Timberline chairlift via an easy, all-abilities run. “They have it engineered so you don’t have to stop and push,” Beallo says. “It’s enough that in the summertime, you can play soccer and football and it’s not steep, but when the snow is there, there’s enough inclination to make it down to the chairlift.”

The snow lounge was an essential component of the home’s architecture. “This was designed to be the hangout area between ski runs,” says contractor Matt Heslin, noting the lounge was meant as a place to zip off the mountain for a quick drink, lunch or to watch a football game.

At roughly 425 square feet, not including the gear storage space, the lounge is covered in reclaimed wood from deconstructed barns near Whitefish, Montana. Corrugated metal sets off a locker area with built-in bench and coat hooks, while a bar and comfy couch encourage the homeowner and friends to relax après-ski. A dual-sided fireplace opens to both the lounge and an exterior terrace.

“That area was all about fun,” says Spirit’s Lauren Marshall, noting she and her team added touches like the mechanical-style lighting with metal arms, the geometric coffee tables and area rug, and the white, furry throws, “which adds comfort and warmth after a long day on the slopes.” The floating glass staircase opens into the kitchen, photo by Vance Fox

A stunning glass stairwell connects the lower snow lounge with the main level and the third-story bedrooms via a floating staircase, which, Gillespie says, takes a utilitarian feature and creates a “journey,” allowing users to appreciate the forested surroundings as well as the home’s outdoor water feature. “Illuminated at night, it is an architectural beacon, hinting at life inside the house and drawing people into the home,” he says.

It was a challenge, Heslin says, to keep the steel, oak and glass staircase structurally minimal, so it would feel light rather than heavy and imposing. “This became a real feature of the home,” Heslin says. “The floating glass/steel staircase really becomes a work of art that is central to the great room.”

The main level includes a soaring great room, media room, guest master and master wing with office. A mudroom also allows ski access, meaning people can get ready for the ski day either on the main floor or downstairs in the snow lounge. “It’s very efficient,” Beallo says. “It allows for a lot of people to use the house and be able to come in and out at the same time.” In the great room, an enormous rock wall serves as a focal point and houses the gas fireplace, while reclaimed oak flooring adds to the mountain feel. Several seating areas break the open space into smaller areas, to include the entry, where the soft, blue chairs are backed with a wall sculpture made of aspen tree trunks, as well as at the 10-person dining table and the impressive kitchen island, made of a granite slab fitted with a custom metal insert.

Down a glass hallway, a media room is set behind sliding barn doors. “The media room is amazing,” Beallo says. The room features a bar cart, custom pool table and large comfy couch, the backing of which features edgy, geometric shapes that play off the design of the built-in cabinetry. Glass sliding doors open to a deck and more views, while a custom piece by local artist Susie Alexander features aspens and incorporates colors found in the home.

On the top level are additional bedrooms and the bunk room. This kid-friendly space features more reclaimed wood and a subtle red, white and blue theme, as well as a “parlor” area with couches and TV, trough sinks in the bathroom and a deck that, like all the exterior spaces, displays stunning views of the Sierra Crest.

“The house is deliberately very linear so that all of the rooms in the house can see Castle Peak and other mountain views out the back,” Gillespie says.

The home’s mountainside design also allowed for an exterior streamscape, which runs along the full frontage of the home and under three distinct bridge elements: at the master, the entry and coming in from the garage, Gillespie says. “With floor-to-ceiling glass in many areas, you can appreciate the water feature from so many angles and parts of the home,” he says. “It ties back to the concept of creating a journey instead of just a hallway to get from one point to the next.”

“The stream adds that zen, calming feeling with the sound of running water and shimmering effect projected through the home,” Heslin adds.

These ideas—of relaxation, retreat and, above all, snow—permeate the home.

Savanna Eccles, also of Spirit, says the interior design firm incorporated this sense of snow in several ways, most noticeably in the lighting. Pendant lighting that seems to cascade down the stairwell was chosen to represent the movement of falling snow, while the great room seating area is overhung with large fixtures that resemble snowflakes.

“It’s so fun for a ski-in/ski-out home,” Eccles says. “We thought it fit really well.” Pops of color, comforting fabrics and textural rugs add to the home’s sense of coziness, photo by Vance Fox

Comforting fabrics add warmth throughout. In the master bathroom, a furry, bear-like rug and standalone tub give a sense of luxury, as does the dual-sided fireplace that opens into both the bathroom and the master bedroom. “Everywhere is very textural, which gives that yummy feeling of snow and warmth,” Eccles says.

The house, named Monte Stella, broke ground in August 2014 and finished construction in November 2016, coinciding with the start of Tahoe’s monster winter. “It was a really great time to be doing a ski-in/ski-out home,” Marshall says.

As part of the Mountainside at Northstar development, located mid-mountain between the Ritz-Carlton and the Village at Northstar, homeowners have access to the Tree House community building, a yoga retreat and more. The house is currently listed with Coldwell Bankers.

While Beallo’s favorite aspects of the house are the views and the ski access, he says he also appreciates how the main floor is level with the driveway and the garage. With the mudroom ski access, it’s possible to live on that main level, ski all day, and never need to go up or down a single step. “You can reverse that and just live down in the ski cave and turn that into your small, personal unit,” he adds. “You can have these great adventures in the house. It’s the best ski-in/ski-out house I’ve been in anywhere in the world, and I’ve been all over.”