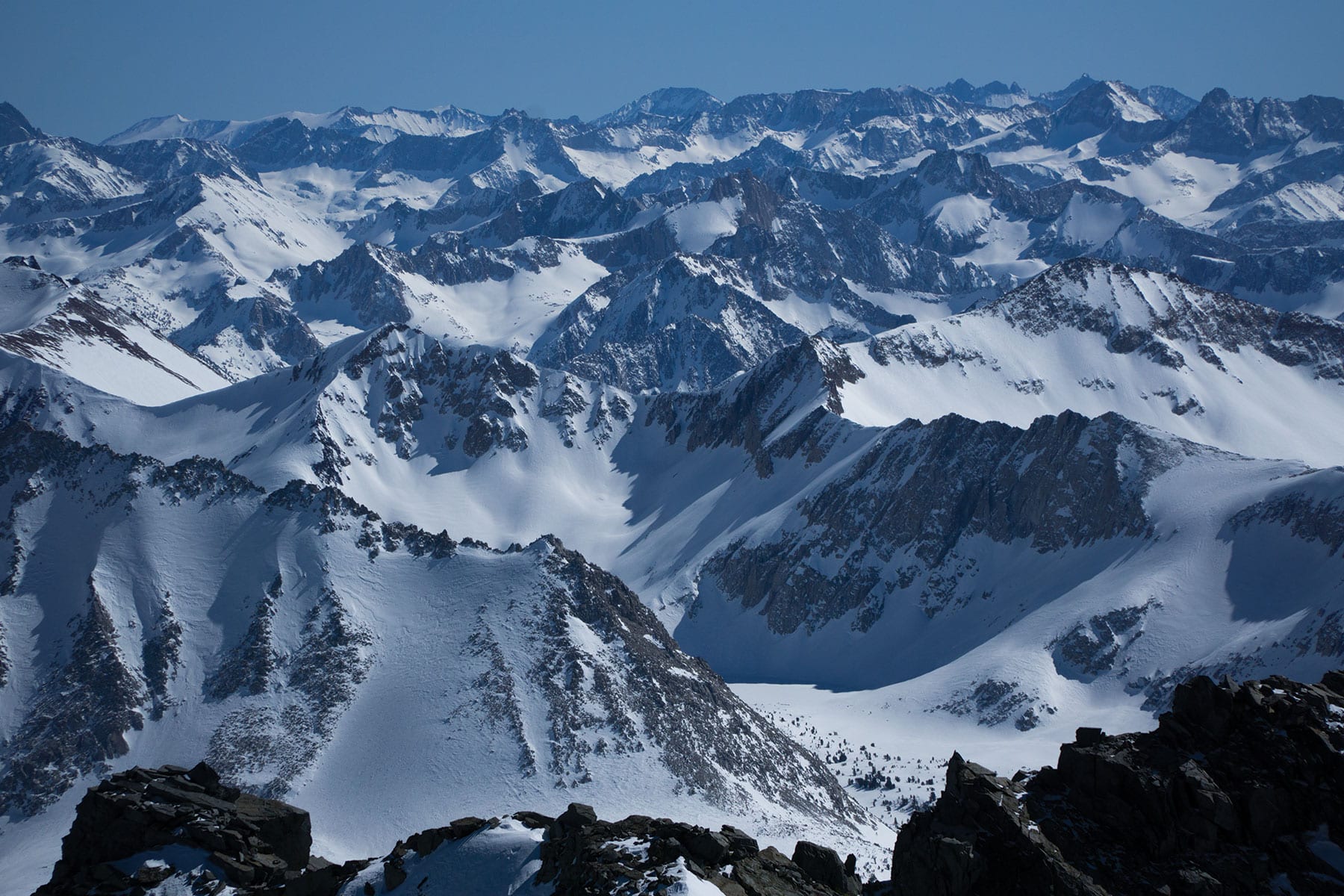 Layer upon layer of snow-plastered peaks stretch to the west from the 14,005-foot summit of Split Mountain in March 2017, photo by Seth Lightcap

29 Sep From Sage to Summit

Hideous knocks and squeals reverberate through the truck cab with every rotation of the tires. The veteran shocks and struts on our trusty Tacoma absorb heavy blows in a vicious off-road street fight.

“Only another hundred yards of the rough stuff,” I yell to my wife, Allison, over the din of the bucking suspension.

She’s sitting shotgun, bracing against the passenger-side handle with both hands, trying to avoid smacking her head on the ceiling as we lurch over watermelon-sized rocks embedded in the dirt road. We endure 30 more seconds of the beatdown before the torturous cobblestones disappear at a road intersection. Relief washes over as we turn onto a smoother but still narrow and sandy road.

We’ve successfully navigated a tricky stretch of the approach to the Red Lake trailhead in the Southern Sierra. A five-hour drive south from Tahoe down Highway 395 took us to this dirt road junction near the town of Independence. A couple more miles remain of 4×4 road to the trailhead, but it’s only 1 a.m., meaning we’ll catch a few hours of sleep before launch time.

Arriving at the trailhead, we fling open the doors and step out into the frosty air of a March night. The sweet smell of sage tickles our nostrils as we open our eyes wide and stare through the darkness at the ghostly contours of massive snowfields looming above. Somewhere up there, where the shadows meet the stars, lies the 12,561-foot summit of Mount Tinemaha.

We don’t linger long in the starlight. Within minutes of pulling the parking brake, we’re crawling into sleeping bags and setting the alarm for 4 a.m. Our plan is to climb Mount Tinemaha and ride our snowboards down its stunning 6,000-vertical-foot east face. We wake up zinging, anticipation boiling in our veins. We have wanted to ride the east face of Mount Tinemaha since cluing into the line around 2011. Six consecutive drought winters in the Southern Sierra have denied us the opportunity. There has not been enough snow on the cliff-strewn face for a safe, continuous descent. But that’s not the case today.

Walking away from the trailhead at 6,500 feet, we immediately hit a snow field that snakes up the moraine. Thanks to the record winter of 2017, Mount Tinemaha and the entire Southern Sierra are plastered with deep snow stretching unbroken from the sage of the Owens Valley to the highest summits in the range.

Just two weeks prior, on March 1, the California Department of Water Resources measured the snowpack near Mount Tinemaha at 201 percent of average. The snowpack at the same location measured 75 percent of average a year earlier, and in 2015, after one of the worst Sierra winters on record, it was a mere 5 percent.

Backcountry skiers and snowboarders weren’t the only ones suffering during the six years of drought. The Sierra snowpack supplies about 30 percent of California’s water needs as it melts in the spring and early summer. The snowmelt from Mount Tinemaha drains into the Los Angeles Aqueduct in the Owens Valley. The gravity-fed aqueduct runs 338 miles and delivers water to the otherwise parched metropolis.

The history of the aqueduct and how the city of Los Angeles came to own the vast majority of the water rights in the Owens Valley is a sordid tale that continues to unfold. At the peak of the drought in 2015, a court order forced the city of Los Angeles to temporarily dam the aqueduct and stop water flow to the city for the first time since 1913. What little spring runoff there was in 2015 had to be preserved in the Owens Valley to maintain minimum flows in local waterways and mitigate toxic dust storms that blow up from dry lake basins.

Los Angeles is getting all the water it needs this year, however, and we are happy to help expedite the runoff by slashing tracks on Mount Tinemaha’s slopes. Allison Lightcap punches up the bootpack midway up the face, photo by Seth Lightcap

After gaining the first moraine, we set our climbing course toward a narrow break in the cliffs that allows access to the main chute on the east face. For the first 1,000 feet, the chute is kicked back enough that we can “skin” on our split-skis. When the going gets steep, we put on our crampons and strap the boards to our backs. Time to get crackin’ on the 3,000-foot bootpack that will deliver us to the summit.

Up and away we go, taking turns putting in the bootpack. The bottom of the face is covered in transitional spring snow, but at 10,000 feet, we start hitting pockets of protected cold powder. It hasn’t snowed in a couple weeks, so the powder is perfectly settled and stable. Feeling the pow underfoot puts a spring in our step in spite of our five-hour climb. After six years of longing to ride this line, we’re closer than ever and the snow conditions are stellar. Topping out on the summit, we are greeted by sweeping views of the mighty Palisades, home to seven fourteeners including Split Mountain, which sits directly behind Mount Tinemaha. Just a week before, we drove the same rough road to the Red Lake trailhead and climbed Split Mountain via the south face. This massive 7,000-foot descent starting from 14,000 feet was another line we waited years to catch in ideal snow conditions. Now, staring down the east face of Mount Tinemaha, we are about to ride a second trophy line in this rarefied region of the High Sierra that we only dreamt about exploring previously.

From the first turn in the soft, settled powder, a rush of pure satisfaction courses through our veins—like biting into a peach you’ve waited days to eat, only this peach of a peak has taken six years to ripen. We savor every slash into the mountain’s sweet, snowy flesh, letting out wild hoots and hollers as we shake loose of gravity and fly down the stunning fall line toward the desert below.

Snow conditions evolve as we drop lower, transitioning from the aged powder to still-delightful, sun-softened spring snow. Finally reaching the truck, thousands of epic turns behind us, we are giddy, drunk on our success in finally riding this sought-after face.

Our boots aren’t even off before Allison mentions returning to Mount Tinemaha next week for a second lap. The day’s adventure was that good, but we laugh, knowing we won’t be back, at least not this season. There are only a couple more months to enjoy the record Southern Sierra snowpack, and our tick list is still a couple lifetimes long.

Seth Lightcap is a Truckee-based writer, photographer and avid explorer of Sierra rock, snow and trail. See more of his stories at www.sethlightcap.com.