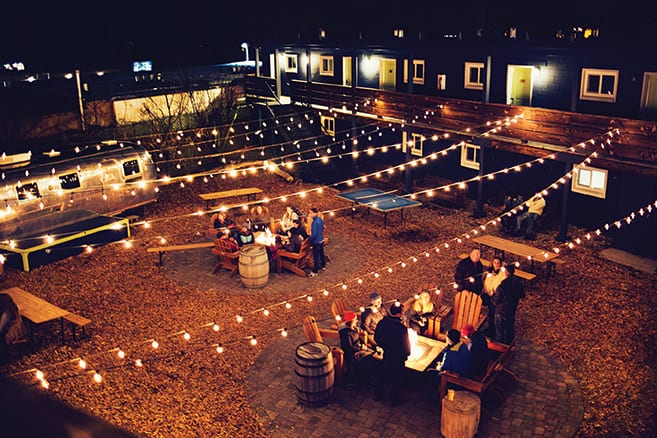 Brought to you by the owners of the long-running and popular Scusa, this contemporary Italian eatery a short stroll from Heavenly Village features dishes such as smoked gouda fried polenta with lemon butter, spicy marinara and pesto, and grilled romaine with bleu cheese, along with chicken and veal piccata, parmigiana, saltimbocca and marsala. The menu includes classic pasta dishes, as well as a fettuccine with shrimp, calamari, scallops, clams and mussels. Gluten-free and whole wheat pastas are available on request. D; $16.95–$29.95 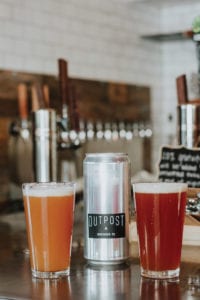 In the Base Camp Hotel’s former Beer Garden space, this kid- and dog-friendly brewpub comes courtesy of local restaurateur Ted Kennedy of Base Camp Pizza and Azul Latin Kitchen, among others. A converted hotel room serves as a production facility and a suds-pairing menu includes a variety of brats like the jalapeño-cheddar-elk sausage topped with feta, avocado and Sriracha aioli on a pretzel bun. They also serve goat cheese mac, salads, sandwiches and barbecued pulled pork sliders from sister restaurant Ten Crows. Fire pits, cornhole, ping pong and live music round out the fun. L, D; $10–$18

This seafood spot in the former Sno Frozen Yogurt Cafe in the Chateau is riding the Hawaiian-inspired poke wave in Tahoe thanks to Ted Kennedy, who convinced James Clark to open this store in the Chateau at the Village (Clark started a similar biz in Las Vegas). Customers start with a base of rice or greens then pick a protein—ahi, salmon, unagi, shrimp or tofu—and sauces such as mango habanero, ponzu or sweet wasabi and toppings from avocado to edamame. Ingredients can be served in a bowl or rolled in a seaweed wrapper. Sushi and açaí bowls are also available. L, D; $9.95–$14.95

A 15-year veteran in the coffee business, Nicki Williams and her husband Will launched this small-batch roastery and cafe after a nine-month remodel. Drinks include the Fireside Mocha—espresso with steamed milk, organic cacao, ancho and chipotle chili and whipped cream—as well as Zephyr Cove–based BlendBee loose leaf teas. Eats are breakfast focused with selections such as the Cristo with ham and Swiss on French toast with a maple Dijon sauce, and a vegan burrito rolled with black beans, soyrizo, roasted peppers and hash browns. Freshly baked cinnamon rolls, biscotti and muffins are on hand as well. B, L; $2.95–$5.95

Caitlin Parker, who owned Firefly Coffee in Santa Cruz, and her partner E.J. Gammage boil, bake, slice, schmear and serve up nine varieties of New York–style bagels Thursday through Sunday mornings at this counter tucked inside Blue Angel Cafe. Their signature sandwich starts with spreads such as goat cheese, hummus, pesto, nutella or jam and then adds bacon, jalapeño, avocado and onion; the Hangover Helper comes with cream cheese and bacon, a 20-ounce brewed coffee with a double shot of espresso and a packet of Emergen-C. B; $4–$8

Chef-pals Mark Davis and Edwin Winslow, both veterans of Tahoe resorts and beyond, launched this modern wine bar–eatery at The Crossing at Tahoe Valley next to Tahoe AleWorX (with whom they share a patio and stage). A 20-tap wine wall similarly permits patrons to taste and pour with the swipe of a card, and a gourmet menu brings breakfast items like a five-grain bowl and sweet potato hash, sandwiches such as the herb and cheese polenta with roasted poblano chile, pickled onion and citrus aioli on a pretzel roll, and salads including chicken chimichurri with pumpkin seeds, honey-infused watermelon and cotija cheese. Evening offers Spanish-style tapas from albondigas to gambas al ajillo as well as custom meat and cheese boards. B,L,D; $7–$30

Owners Esther and Werner Ospelt opened this Euro-style spot to recreate the inviting alpine cafes of their native Switzerland. In addition to specialty coffee drinks, an all-day menu offers bagel sandwiches, avocado toast, yogurt parfaits, sweet and savory custom crepes, salads and panini like the Brienne—brie, bacon and caramelized onions on a baguette. Bakery items include croissants, cinnamon rolls and the Truckee Crown. Gluten-free options and online ordering are available. B, L; $4.25–$9.95

This richly decorated family-run Northern Indian restaurant serves all the classics like samosas and pakoras, paratha and roti, chicken, lamb and seafood curries, vindaloo, masala, tandoori and biryani dishes, many of which can be sampled on the daily lunch buffet. Need to cool it down a bit? Try a Flying Horse or Taj Mahal beer, or perhaps a mango lassi—chilled sweet mangoes blended with a touch of rose water and fresh homemade yogurt. For dessert there’s gulab jamun—fried cheese balls soaked in honey syrup. L, D; $-9.95–$15.99

Adjacent to La Famiglia and Wild Garlic, this fresh modern space across from the Pioneer Center has also joined the local poke party. Bowls come in two sizes and diners fill them with rice, greens or wonton chips followed by ahi tuna, spicy tuna, salmon, yellowtail, shrimp or scallops, and a choice of seven sauces from spicy ponzu to wasabi aioli along with toppings from pickled ginger to seaweed salad. L, D; $11–$14

Anitha Pagidi, a native of southern India, serves lunch Thursday through Sunday at this pop-up eatery that shares a space with Thali restaurant in the West Street Market. The simple organic, vegan and gluten-free menu includes dosas, which are thin rice and lentil crepes, as well as idli, a type of fermented spongy rice and lentil patty. There’s also puffy fried bread called poori and medhu vada—a fritter made from black lentils. All are served on a thali—compartmented metal trays complete with chutneys and sambhar, a lentil-tamarind stew. L; $5.99–$6.99

With the motto “Keep Reno Sweet” (along with “Eat more hole foods”) Galen and Cadi Schmidt launched Reno’s first specialty donut shop. This family-friendly space that’s part of the Terry Lee Wells Nevada Discovery Museum turns out some 50 to 75 flavors ranging from Oreo cheesecake to Nutella, marshmallow to peanut butter, along with just about any cereal or candy bar flavor imaginable, as well as themed donuts, churros and vegan selections. They also serve specialty coffee drinks. B, L, D; $1–$2  per donut.

Looking for a spot to grab a bite before or after a Wolf Pack game? This spot across the street from campus formerly known as the Wolf Den seems a tasty match-up with UNR sporting events. There are garlic knots and oven-baked wings to start. Pizzas include Rick’s Special, with smokey barbecue sauce, mesquite grilled chicken breast, sweet red onions and green bell peppers topped with parmesan cheese, and the Big Mackie, with creamy garlic, honey smoked ham, red onions, pineapple and slow-cooked barbecued pork. They also serve sandos such as the Sparks made with meatballs, mozzarella and marinara. Online ordering is available. L, D; $9–23

Batuhan Zadeh and Sabri Arslankara, two 20-something cousins of Turkish descent from Boston, launched this Midtown spot connected to the new Under the Rose Brewing Company space (see below). Some 30 thin-crust pizzas are made with dough from Mark Estee’s Liberty Food & Wine Exchange, including seven breakfast pies piled with all manner of egg and steak, bacon or sausage; the Turkish version employs eggs, tomato, green peppers, black olives and feta. Wings, salads, sandwiches, calzones and pasta are also on the menu to enjoy in the 20-seat dining room, for takeout or delivery via their app. B, L, D; $9.99–$17.99

UNDER THE ROSE BREWING COMPANY MIDTOWN

After a long wait, this 5,100-square-foot exposed brick space has finally opened decorated with murals depicting Mt. Rose, for which the brewery is named, locally crafted Nevada-shaped wood and metal tables, and 24 taps. Andrea Keil, from Tahoe Mountain Brewing Company, oversees the small-batch production facility meant for testing out new styles; the Fourth Street tasting room remains open for limited hours. A brief menu includes small plates such as craft sausage sandwiches, soft pretzels with saison beer queso, and totchos—nachos made with Tater Tots. Or order a pizza from next door. L, D; $9–$18

This family-run Korean eatery offers a great menu of traditional dishes served in a handsome dining room. Popular appetizers include crunchy kimchi pancakes and crispy fried chicken with sweet and spicy barbecue sauce. Velvety soft tofu soups are served with rice and banchan, which are complimentary condiments like kimchi and daikon, along with an egg to crack into the broth on arrival. Also on the menu are hot stone rice pots like the bibimbap made with bulgogi, veggies and fried egg, as well as noodles dishes and Korean barbecue. Cool it all down with a somaek, a mix of Korean distilled spirit Soju with beer. L; D; $10.95–$23.95

This cheery counter-service spot in the Costco shopping center pours, swirls and folds a wide variety of crepes. Start savory with the Madame made with mozzarella, provolone, romano and parmesan, thinly-sliced ham and a fried egg. Or a French Riviera, with that cheese blend plus grilled chicken, artichoke heart, diced tomato and basil. Finish sweet with a Cookie Butter with graham crackers, marshmallow, chocolate chips and vanilla sugar. Coffee drinks and loose leaf teas are also available. B, L; $4.95–$9.95

Located in the former Cantina Los Tres Hombres space in the same shopping center as Bistro 7, this family-run restaurant is the second for the Rivera family, whose first store is in Winnemucca. Natives of Chihuahua, Mexico, Dora and Javier built an authentic menu based around recipes for Tex-Mex favorites like nachos, flautas, enchiladas, burritos, fajitas and chiles, and chimichangas, plus tacos adobo, asada, shredded beef, lengua, chicken and carnitas style. The menu also includes south-of-the-border-inspired seafood, steaks and burgers, as well as pozole and menudo. There’s live music on weekends. L, D; $11–$37

Felice Carrano, a native of southern Italy, is the proprietor at this family-owned no-frills spot that combines a deli stocked with house-made meats such as salumi and sausage, as well as pasta, sauces, pizza crusts and meals to go, including 23 lasagna recipes, which require advance notice. In the small dining area, patrons can order lasagna, cannelloni, pionono, pizza, meatballs and sandwiches; the Italian Special is made with salami, pepperoni, capicola, provolone and fresh basil and is served warm with melted cheese on a toasted roll with pesto. Save room for the chocolate-dipped cannoli. L; $6.49–$14.99

A former software engineer, Ryan Walker swapped code for dough, opening this brick-oven pizza place after training with thin-crust experts in Staten Island, New York. Located in the former Thick Slice Pizza space, choose from one of the specialty pies like the signature From Russia with Love made with tomato vodka sauce and prosciutto, or design your own from the list of some 25 ingredients from San Marzano tomatoes to broccoli rabe. Also on the menu: smoked chicken wings, ribs, meatballs, salads and sandwiches. L, D; $8.49–$24.99

Taking over the 10,000-square-foot former Tahoe Ridge Winery space, Manpreet Kaur and her mother Dolly relocated from San Jose to open this Northern Indian spot (which has no relation to the Reno establishment by the same name). Find here staples such as tandoori and butter chicken, biryanis and vindaloo, and veggie dishes like palak paneer and dal makhani—black lentils with onion, garlic and tomato finished with butter and cream. A rotating selection is served at a daily lunch buffet. On weekends, sample a selection of chaat, or savory snacks usually sold from subcontinent street carts. L, D; $10–$15