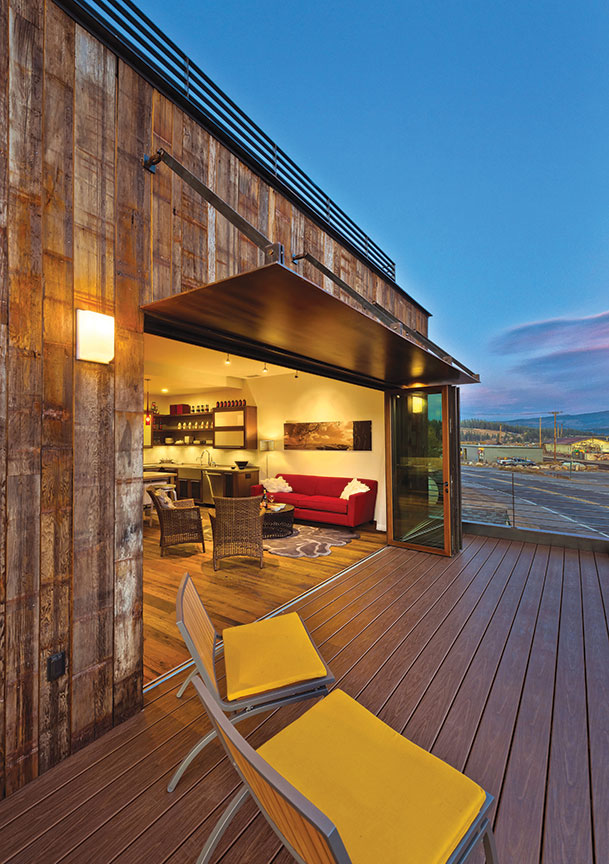 Urban Living for the Mountain

The project taking this year’s Mixed-Use Award blends so well with Truckee’s historic downtown that one has to ask on seeing it the first time if it isn’t just one of the town’s old landmarks, renovated with a fresh face.

From the street, it looks like a modest building sided with old barnwood and supported by exposed steel beams reminiscent of the town’s railroad days. Below is the Cake Tahoe bakery. Above is a small, sunny deck that hints of residential space. 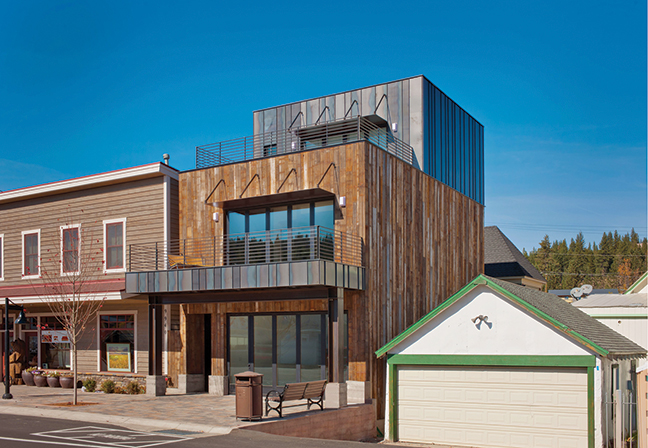 Steel and barnwood accents give the building a rustic, yet modern appearance

But climb the steep flight of stairs to the second story and you’re in for a surprise. The space opens to a two-story condo with contemporary design features artfully woven into the rustic finishes long associated with Old Tahoe style. The main flooring is fashioned from reclaimed oak so rich in character one would guess it might have been salvaged from the Victorian building that stood in this same spot 120 years before.

Here, contemporary meets mountain to flawless effect in a design combining the sleek elegance of blue steel and Scandinavian-inspired cabinetry designs with the earthy feel of pickled barnwood.

“Our innovative approach and modern design are, in my opinion, outstanding, yet the building really ‘fits’ into the space where it lives,” says general contractor Mark Tanner. 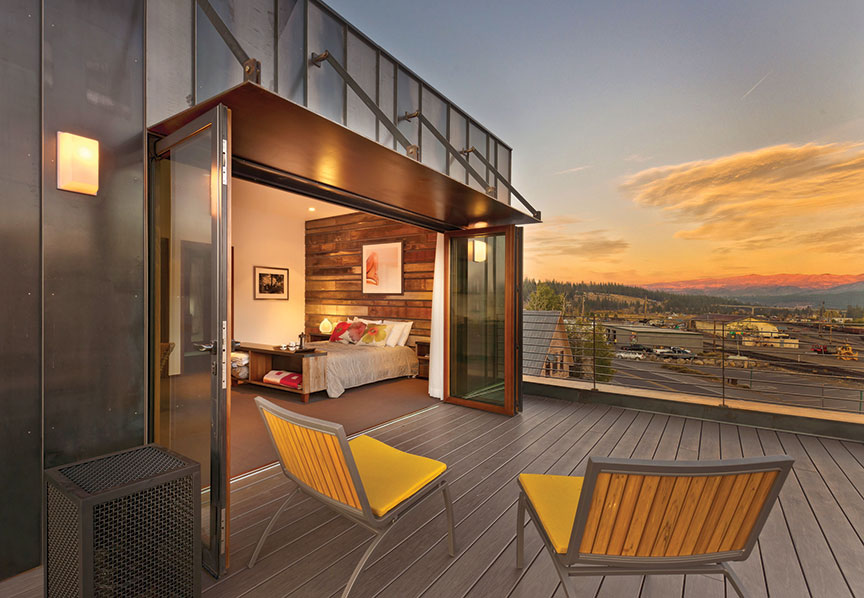 The bedroom opens to the top-floor deck

The building is a model of what San Francisco Bay Area developer Rick Holliday envisions for a portion of the Truckee Railyard Project, a plan to transform 78 acres on the downtown side of the railroad into live-work spaces with a movie theater, shops and condos. Holliday purchased 34 acres of the proposed project area, including the land on which Truckee River Glass sits, but the full-scale vision, which includes the re-alignment of Donner Pass Road, will ultimately require some form of public/private partnership.

Holliday, who owns a second home in Tahoe Donner, has a reputation in the Bay Area for transforming blighted urban areas into vibrant neighborhoods with new housing, shops and restaurants, including successful mixed-use developments in Emeryville and San Francisco.

“Rick is not the type of developer who wants to be a landlord,” Tanner says. Holliday’s emphasis is on live/work spaces, and as the Railyard Project unfolds in Truckee, the intent is to sell the new buildings to business owners who might want to set up on the ground-level or investors who could potentially lease out the commercial space. 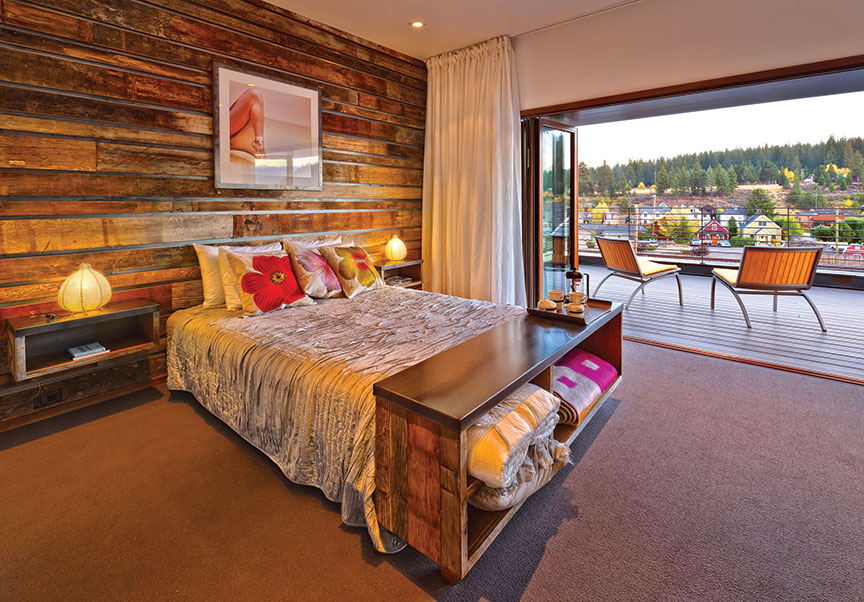 Tanner paired up with Holliday after working on a few personal projects. The downtown building, Tanner says, is the product of many revisions that included designs from SANDBOX Studio of Tahoe City and David Baker + Partners, a San Francisco architectural firm noted for its green designs. Twenty sets of plans later, Mark Tanner Construction broke ground in September of 2010 and finalized the project in 2011.

It took so long, Tanner says, because it is going to be a model for what’s to come, and they wanted to get it right.

“Our objective was to be the area’s first in-fill condominium,” he says. “This project contributes to the beginning of a new phase in the Truckee downtown corridor. Having the building design honor the historic aspects of Truckee while providing modern detailing was important to us.”

A Donner Pass Road address doesn’t exactly evoke images of indoor/outdoor living with barbecues and late summer nights on the deck, but one of the most surprising features of the new model is its 390 square feet of deck space, including a top porch with full southern exposure that is almost invisible from the street because it is set back from the deck below. 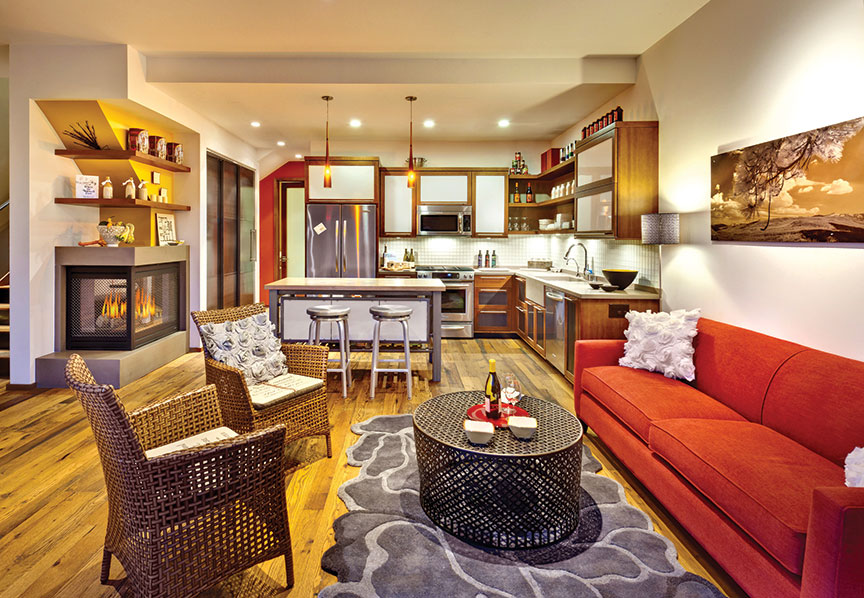 Sliding glass door/walls on both condo levels were custom built by Weiland Sliding Doors & Windows in Oceanside, California, to create a seamless flow between the living room and the outdoor decks.

“Not only did the folding glass door systems achieve a low-E rating for intense southern exposure, but the inside spaces were dead quiet from the outside train and car noise,” Tanner says.

With just 875 square feet of residential space, the two-bedroom, two-bath condo might sound small, but an innovative design maximizes the space. A Murphy bed drops down while a third-story bedroom wall, which appears to be a simple pickled paneling of reclaimed barnwood, incorporates steel backing on which to anchor shelves, artwork, or hooks and hangers that can hold the weight of everything from night stands to sporting gear.

Moving forward, Tanner says, the hope is that similar mixed-use buildings will be the critical mass needed to transform Truckee’s downtown commercial row into a “true village.”