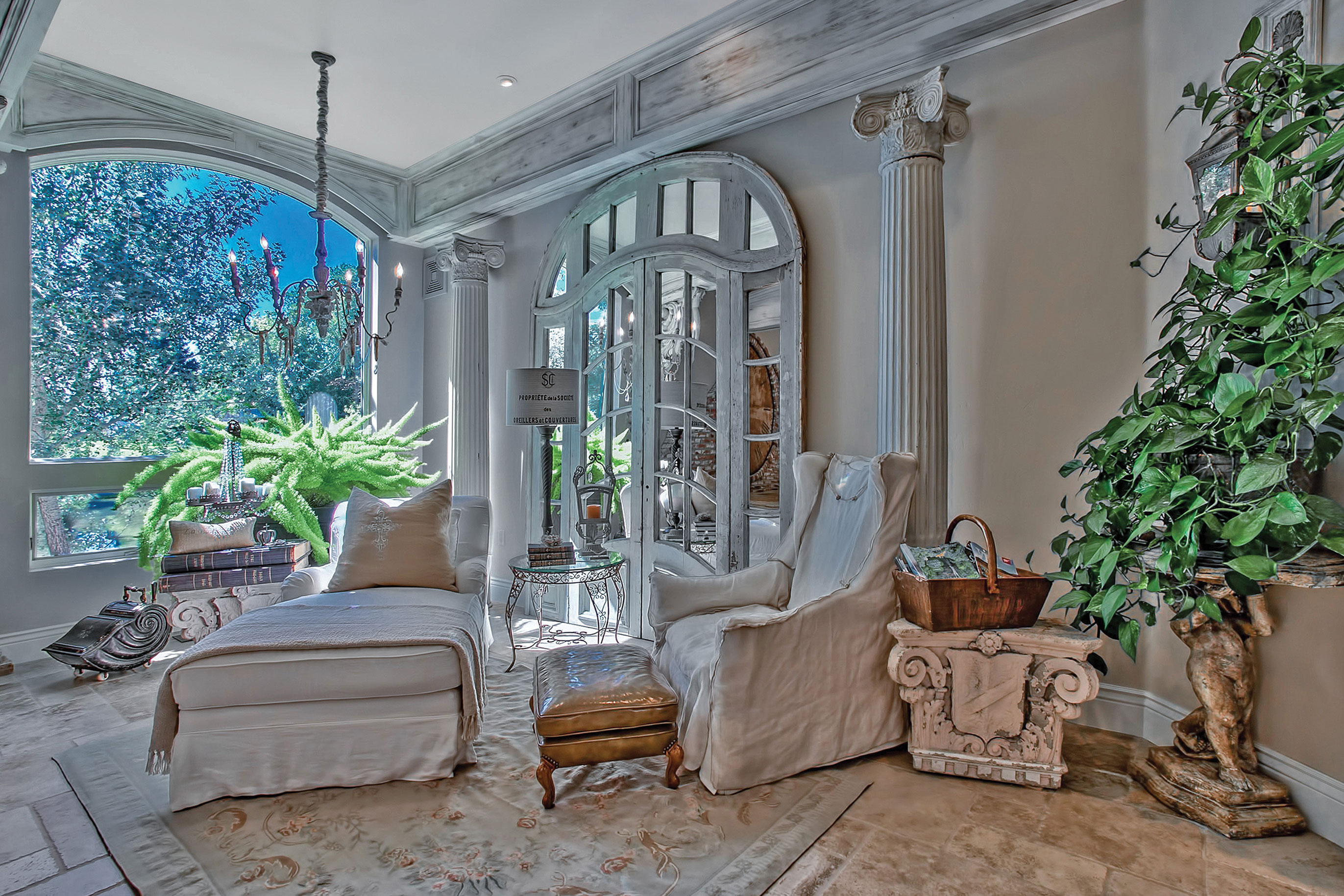 Antique columns in the great room

Living in the Past

This is the story of a treasure hunt.

Sharon had, for years, collected antiques she’d found while shopping with friends, or stumbled upon while riding Harley Davidsons with her husband. She found herself drawn to the past, to these chipped, scratched pieces—“I call them perfectly imperfect,” she says—and decided that this new home would be the perfect way to display her treasures.

“I wanted to build the house around them,” Sharon says.

The remodel began in earnest in 2004. Sharon contacted her friend, Sue Murphy, who then lived in Southern California and has since relocated to Reno, and asked if she would help with the home’s redesign.

“With Jim being the builder, Sharon and I had the luxury of taking our time and working on each individual space,” says Murphy.

It was on one of Sharon’s many trips to Southern California to meet with Murphy that the pair had an epiphany that would define the home’s style.

While shopping at an antiques warehouse, the pair discovered a stunning pale green French hutch. About 10 feet tall and 12 feet wide, the hutch is delicate and graceful, and sports a large mirror and decorative woodwork. A replica of a sixteenth century piece, it originally resided in a gentlemen’s club, from there moving to a French beauty parlor before traveling to America.

“It set the tone for the home’s interiors and furnishings,” Sharon says.

With the country French style set, the Hellebrandts set about remodeling the house, ultimately leaving only one of the original walls in place. The result is a romantic, luxurious home full of stories.

Guests enter through the formal foyer, an intimate space with a tall, painted ceiling and clerestory windows. A long grand hall runs across the main floor, connecting the two wings of the home. To the left, it leads to the main public spaces, the open kitchen, dining room and living room.

In the kitchen, dark hickory flooring contrasts against limestone countertops. A sandblasted limestone tile design over the range and an antique fireplace built into a corner lend an Old World charm, yet the gourmet kitchen boasts very modern conveniences, many of which are built into cabinets so as not to detract from the home’s feel.

In the dining room, the gentlemen’s club French hutch stands against one wall. When it arrived at its newest home, it didn’t quite fit—Jim had to raise the ceiling four inches to accommodate the piece. A crystal chandelier, antique urns and a dining table with upholstered chairs round out the room.

The living room, which includes a 250-year-old armoire refitted to hide a television, features a custom chaise, tufted furnishings, fireplace and a view of one of the ponds from an enormous window, which was redesigned to incorporate woodwork, softening the room while adding architectural detail. A door opens on one side to the outdoor entertaining area and barbecue, while on the other end of the living room, heavy drapes separate the master suite.

The master is soft and romantic without being frilly. Light, cream-colored furnishings complement gilded mirrors and antique statues. A fireplace lends warmth while a balcony adorned with antique Argentinian wrought iron is an inviting spot for coffee in the morning or cocktails in the evening. Pulpit rails from an old church front the entry to the bathroom, as do plaster and horsehair corbels. A soaking tub is adorned with a cherubic statue while marble countertops and flooring echo the Old World theme. Even the closet—the clothing hidden behind mirrored doors—is clean and elegant. 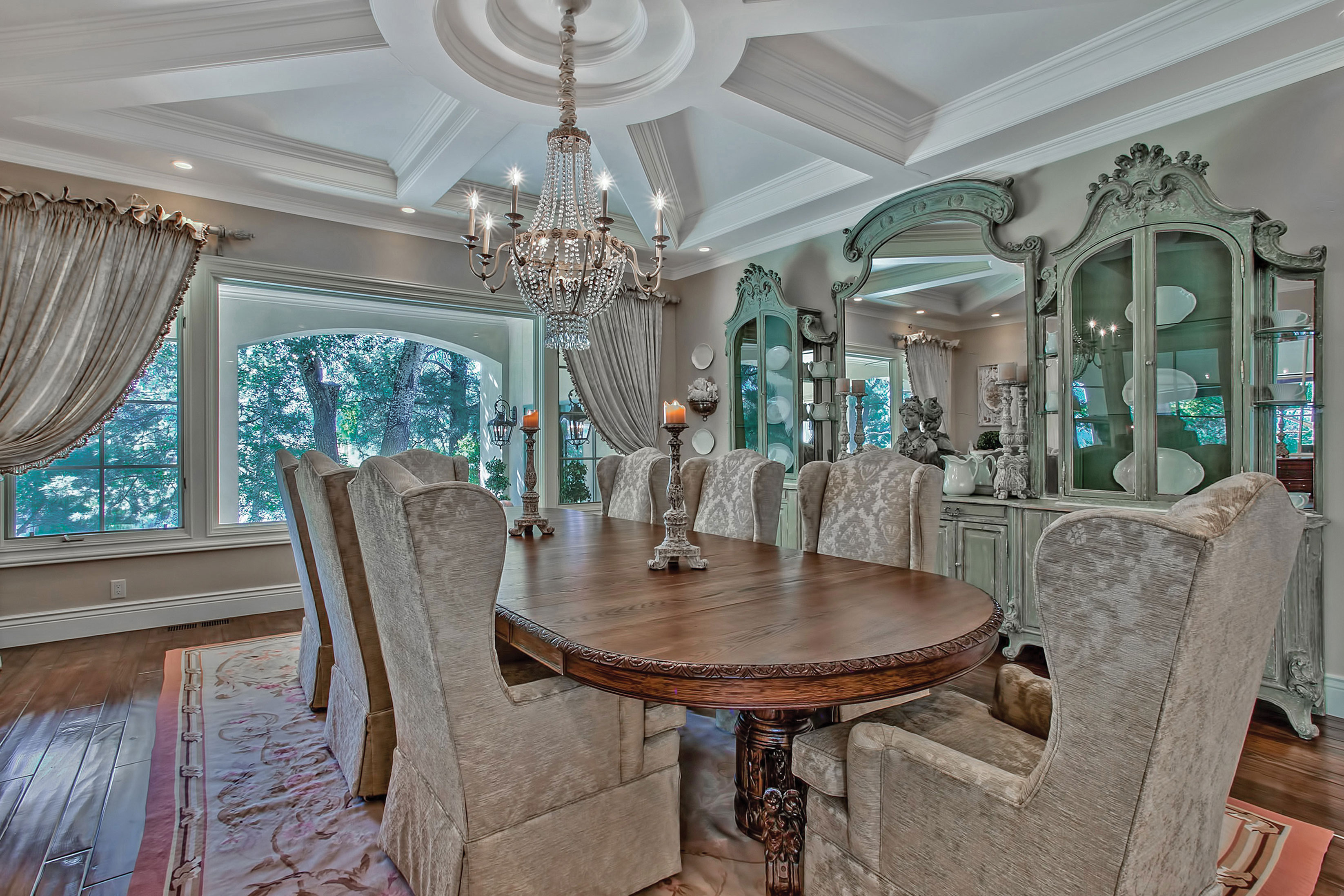 The pale green hutch, which set the tone for the home and originated from
a French gentlemen’s club, was too tall for the original dining room, so
Jim Hellebrandt raised the dining room ceiling four inches to
accommodate the piece.

The treasures in the home are ones Sharon has collected for years. Some of her earliest pieces include an intricate European stained glass window, which was repurposed into the property’s pump house, and two five-foot-tall corbels the Hellebrandts found at an antique shop near Los Angeles while riding their motorcycles and later returned for with a trailer.

These corbels have now found a home in the great room. Originally an indoor pool, the great room was a giant square lacking architectural interest. To move away from the ‘pool room’ feel, Jim built a brick fireplace against one wall. Windows were eliminated or redesigned and built-in cabinetry added. Trim was added to the glulam beams, which were painted and weathered. Against the back wall, more brick frames an enormous clock face Sharon found on an antiquing trip, while two brick pillars support the large corbels. In another section of the room are two tall pillars Sharon and Jim found on a trip to the South Dakota motorcycle rally Sturgis; after buying the set, the Hellebrandts maneuvered them through their motorhome’s window and drove more than 1,000 miles with the pillars lying in the center aisle.

Two sets of French doors act as wall décor. A workman’s table and antique birdcage were found at a shop near Squaw Valley, while the bar was a garage sale piece Sharon had faux painted to match.

On both the inside and outside of the home, unexpected pieces manage to find a perfect place. One of the oldest pieces is a European gate that stands outside the mudroom/laundry room, which Sharon says a metalworker estimated is about 300 years old.

The mudroom/laundry room was a challenge as it was going to be used as the casual entry to the house and therefore needed to be special. This was accomplished by building special cabinets for the washer and dryer, adding a bench and desk area, incorporating a copper apron-front sink and using the European style of unfitted cabinets. A marble-topped pastry table and chandelier add to the room’s casual elegance. “We were able to marry beauty and function in this room,” Murphy says.

Incorporating beauty and function is a definite theme throughout the home. For example, in Sharon’s office (she works as office manager for Jim’s firm, Hi Desert Construction), most of the technology—essential to a modern functioning office but out of place with the rustic European countryside look—is concealed, the eye drawn instead to the leather and wood desk, an antique globe and various treasures displayed on the bookshelves.

A Place for Everything 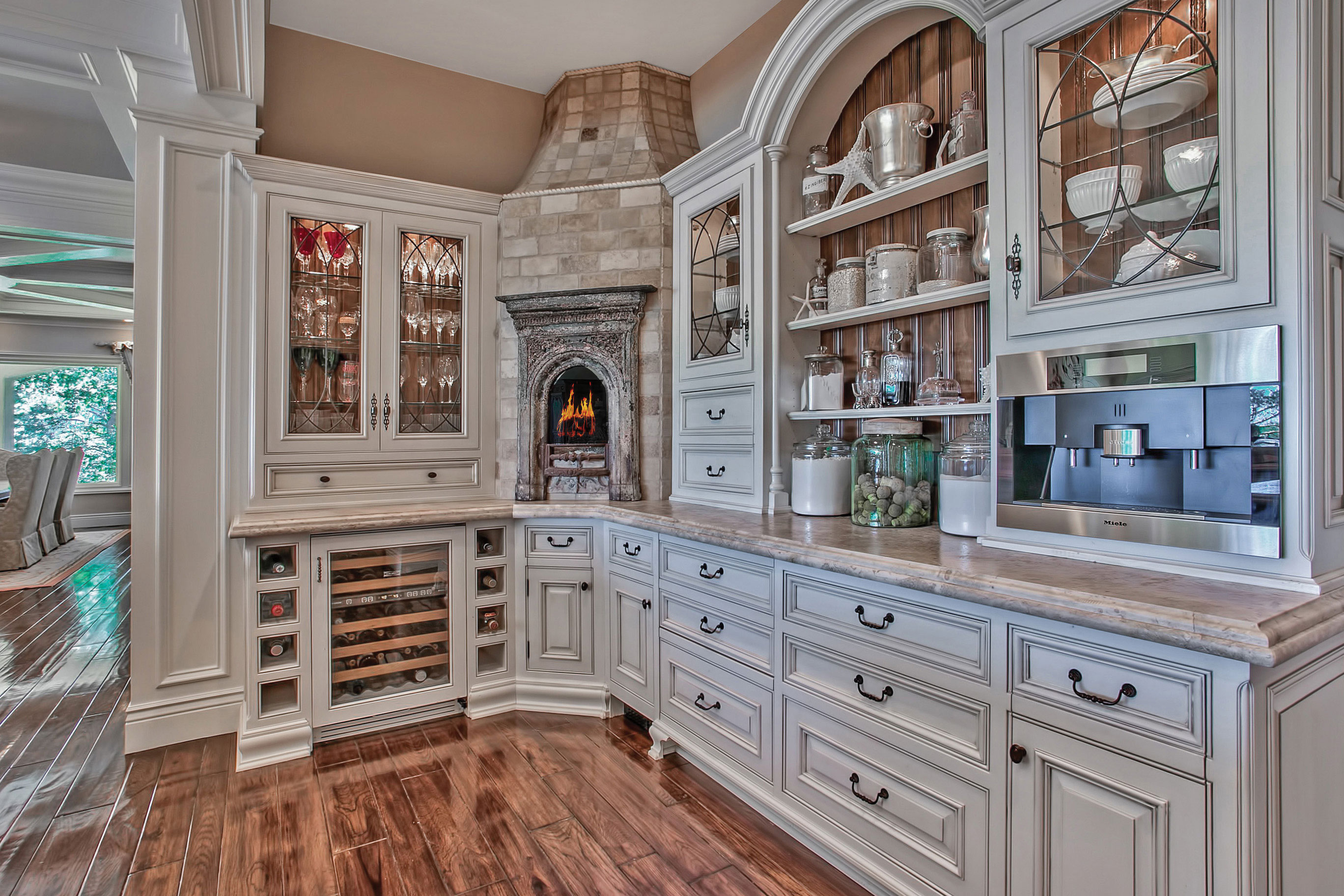 Built-ins, such as the antique fireplace in the kitchen, add to the home’s
Old World charm

Sharon firmly believes that if you love a piece, there is a way to make it fit in the home.

In the powder room, for example, a French sideboard was fitted with a marble top to become a vanity that Sharon found on an antiquing trip. Jim was still in the framing stages of the home, so Sharon called to see if there was room for the piece. The original space was a little too short, but Jim was able to move one of the walls so the sideboard would fit.

Downstairs in the game room is an old oak bar the Hellebrandts found in Winona, Minnesota; the wall behind it was designed with cabinets, hidden appliances, a mirror and counter space to match the antique and create a fully functioning bar. A wine room nearby is set behind an old vault door while billiards and a theater projecting onto a 120-inch screen make this a more modern, yet still luxurious, space.

In the guest wing, a full main floor apartment includes a kitchen, bedroom, bathroom and a patio fronting one of the ponds. Upstairs are two guest suites with a shared kitchenette. The rooms are sweet and feminine and each is appointed with found pieces—an old armoire, a chipped desk, a French ventilator cover repurposed into a wall hanging, an antique bed Sharon repainted—as well as newer furnishings.

Beyond the larger furniture pieces, the home is dotted with treasures Sharon has come across on her “stops along the way”: newspaper journals from 1945, an antique set of Encyclopedia Britannicas, iron lights that needed wiring because they pre-date electricity, pillows made from cloth from a Catholic church, old safes (including one from the Nevada Copper Belt Railroad), European statues and found keepsakes.

“There’s that cleansing book that says if something doesn’t make you feel good, you should get rid of it,” says Sharon. “All this makes me feel good.”

Eleven years after the remodel began, the process is finally nearing an end. “It was a tremendous amount of work, but I loved every minute of it,” says Sharon.

“Finding that unexpected piece and using it to tell a story, create a mood or a feel for a room was such a joy,” says Murphy. “Having the luxury of time to let the house evolve, much like the old homes of Europe, is what makes this a truly unique home.”

For the Hellebrandts, after a decade of remodeling, the couple has put their 9,032 square foot country French estate up for sale through Sotheby’s International Realty for $8.9 million. “I love it,” says Sharon. “I appreciate the old pieces and how they make me feel.”

To learn more about the country French estate, click here.

Alison Bender is now in the process of making her own kitchen feel more French, which means stocking up on Bordeaux reds and Champagnes. She wants to thank Sue Murphy, who owns Reno’s the Freckled Frog, for her help with the article.