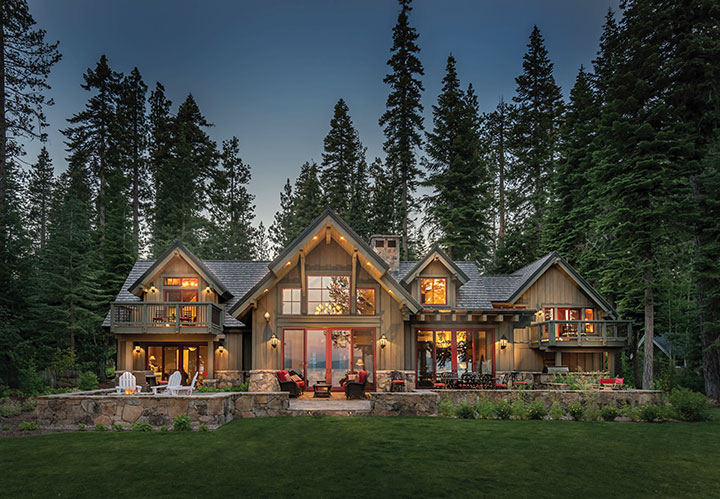 Cathy Stannard certainly agrees with the old saying that the West Shore is the “best shore.” After all, the West Shore has a reputation as Lake Tahoe’s tranquil side, traditionally associated with boating, history and a family focus.

“We love the West Shore,” says Stannard, who lives fulltime in Los Gatos, California, with her husband, John. “It’s quieter, not so busy. It’s our secret spot.”

“It was a 1940s or ’50s cinderblock house with steel windows and no insulation,” says builder Mark Tanner. “It was a summertime Old Tahoe cabin, but it became an igloo in winter. They wanted something that could be used year round.”

“It was very narrow,” Stannard adds. “We wanted to open it up and make it larger.”

The project began in 2012 as Scott Gillespie, principal of Tahoe City’s SANDBOX Studios, drew up plans to maximize the cabin’s location while adding energy efficiency and a retooled floor plan. “There is quite a bit to consider when remodeling a home such as this,” says Gillespie, “from how to logically integrate both a new floor plan and aesthetic with the old, while honoring the Old Tahoe architecture of the original, to upgrading the structural and mechanical components to meet current standards, to doing all of the above with a budget that is less than new construction.”

The home’s lakefront location also meant the Tahoe Regional Planning Agency (TRPA) had to approve all modifications. “The TRPA scenic process can be very arduous,” says Gillespie. “They look at everything that can be seen from The Lake, so the massing of the home, window fenestration and all of the material and color choices come into play. We worked with Ogilvy Consulting on the TRPA scenic process and they did an outstanding job, getting us a permit in a month and a half.”

The TRPA coverage issues meant very little room to add on, so Gillespie and Tanner needed to improve the layout. “There was a lot of dead space within the existing interior walls,” says Tanner.

They pushed the eastern walls out about eight feet, creating a dining room off the kitchen and additional space in the great room. They opened the original trussed roof to allow for vaulted western red cedar ceilings and dormers. Tanner and his crew needed to structurally support the walls while rebuilding them to include insulation. “It was time consuming,” he says, “but it saved money in the long run.” Sourced from the Sierra Foothills, the manzanita in the stairwell is specially treated to serve aesthetic purposes

After installing under-floor radiant heat, the team insulated the roof and replaced it with a synthetic DaVinci tiling that mimics wood shingle. The old, dark galley kitchen was reformatted; though in the same location, it now features modern appliances, under-counter lighting, soft-closing knotty alder cabinets, a harvest-style island and a dramatic bronze hood.

“We felt from the beginning that this property needed to be preserved in the West Shore Tahoe spirit,” says interior designer Kaye Dalbon, of Roseville, California. “My intent was to improve the home’s comfort and function while creating an appeal that transcends time.”

Walnut flooring gives the home warmth while reclaimed beams add to the Old Tahoe charm.  Outlets inconspicuously located in the baseboard keep walls clean and clutter-free. Stained alder woodwork creates a dark, rustic feel throughout. The granite rock used on the walls and fireplaces originated from a quarry near Sugar Bowl; in the great room, says Tanner, it took eight men to carry in the big stone hearth. Despite the remodel, much remains the same. An apartment connected to the house stayed relatively untouched, allowing the owners a place to live during construction and offering a look at the drastic transformation from a pine-paneled cabin to a grand estate. During the demolition phase, Tanner’s crew took the paneling to reuse into other projects and put door hardware on eBay. The roofline changed only slightly, much of the foundation stayed the same and about 60 to 70 percent of the walls remain in their original location.

Less than 500 square feet was added to the home. Upstairs, raising the roof 18 inches and installing dormers allowed the team to make better use of the space. A guest bedroom received some extra square footage and a reconfigured bathroom.

The remodel also allowed for an office, as well as a mechanical room replacing empty attic space. The master bedroom stayed the same size, though it made use of timber for an Old Tahoe warmth, and the redesigned master bath now has a more efficient layout.

Stannard especially likes the stairwell. The original stairs featured steep ten-inch-high, ten-inch-deep treads in need of replacement. She found a picture of manzanita branch railing that she loved. “I had to convince my designer and my husband, but I stood my ground,” she says.

“We had to harvest at the right time of year—mid-September—or else the red bark falls off,” Tanner says of the branches, which were sourced from near Auburn. Woven carefully between the stair posts, the manzanita railing now serves almost as an art piece as one transitions from downstairs to up. More material than just the manzanita found new life in the home. Two fir trees were felled during construction: One was fashioned into a pedestal in the powder room; the other was milled into the mantel and corbels in the great room fireplace.

On the exterior, painters stained the house green through a seven-part hand application process, and tinted the windows cranberry. Tanner’s team installed new railing, as well as weather-resistant PVC decking. An extended patio, also made of Sierra granite, takes in the lot’s broad views of the water. A pier, shared with a neighbor, gives the Stannards a place to keep their boats—to include a 1930 Chris-Craft Runabout that won second place in the 2012 Concours d’Elegance—during the summer months. A home automation system, complete with cameras, allows the Stannards to keep an eye on their house and boats in case of inclement weather.

“We love the water,” says Stannard, who hosted family parties this past summer for 27 adults and 30 children at the home. “We love getting the kids out on the boat.”

“We’re so happy,” says Stannard. “We can see the whole way across The Lake. This was our dream and it came true.”