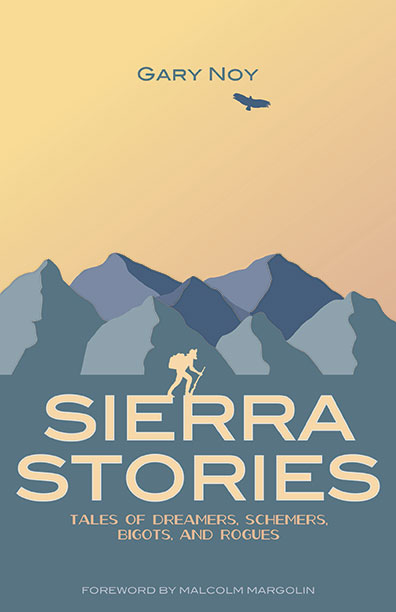 17 Dec The Range of Light—and Darkness

Author, historian and Sierra College professor Gary Noy has spent a lifetime collecting stories about the Sierra Nevada mountain range. In the recently published Sierra Stories, Noy curates his collection to great effect, offering readers a smattering of succinct and highly readable accounts of the mad strivers, the ostracized immigrants, the robber barons, the famous entertainers and other noteworthy individuals who lived in the skinny mountain range running down eastern California.

Born in Grass Valley, Noy was indoctrinated with the tales and culture of the Range of Light as a boy traveling with his parents throughout the Sierra to learn of the men and women, the events and ideas that have grown to become as inextricable as the granite that predominates in the peaks of the high mountains.

“When I was a kid we would travel around our new home,” Noy says, adding his parents both moved to the Sierra from different parts of the United States. “Yosemite, Lake Tahoe—we went everywhere. And as you visit all of these communities and these little places you realize that just about everybody came to the Sierra from somewhere else and I became fascinated with all of these different stories.”

Heyday, a publishing company affiliated with Sierra College and based in Rocklin, California, published Noy’s collection of 64 of those tales unique to the Sierra and its foothill communities.

There is a concerted effort to unearth some of the lesser-known true tales, Noy says. Sierra Stories does not offer yet another iteration of Mark Twain’s fabled trip to Lake Tahoe from Carson City or another retelling of the Marilyn Monroe and Jack Kennedy rendezvous at the Cal Neva.

Instead, the gaze of Noy’s unique brand of history is cast on some of the accounts of adventures and names that have faded from the collective memory.

“These are stories that are hidden in the background or the stories people just know parts of,” Noy says.

For instance, while the story of the flumes built in the northeastern corner of the Basin designed to convey timber to the flourishing mines of Virginia City is common local knowledge, many people are unaware that the owners of the Bonanza V flume joined a journalist in 1875 in riding a harrowing half-hour trip in pig troughs reaching speeds of an estimated 60 miles per hour and providing the model for popular log rides one encounters at amusement parks.

Another example lies in Truckee, a well-known setting for the construction of a portion of the Central Pacific railroad, which would eventually become an integral part of the nation’s first Transcontinental Railroad. Most know railroads in the American West could not have been built without the herculean labor of Chinese immigrants, who were compensated little for their efforts.

What is less well known is the emergence of what was deemed the “Truckee Method,” which describes the town’s strategy to divest itself of its Chinese population by boycotting their establishments and refusing them service.

Herein lies another attribute of Noy’s compendium, in that a lesser historian may have fallen prey to the temptation to look back at the yesteryear of the Sierra through the lens of romantic pioneers wrestling with destiny and using ironclad wills to imprint their furious lives on the rough topography of a new land.

Noy delves into this aspect of the birth of California and gives it ample due, but he does not neglect to unearth stories of the despicable bigotry, the wanton violence, the seething injustice that wasn’t just perpetuated subtly under the cloak of darkness, but carried along by the full legislative authority of the entire state.

“There are some very disturbing parts of our history that I wanted to be part of the mix,” Noy says. “I didn’t want to just keep it hidden.”

The Sierra Nevada’s variation in topography is an apt symbol for the same variance in the vast collection of anecdotes comprising the history of a place—from the glorious and grandiose to the shameful and disreputable.

Noy says the 64 stories presented in his latest book were arrived at only after reluctantly discarding hundreds of other accounts with as much relevance and capability to generate interest, meaning a second volume could be forthcoming if the demand is present.

“If the book does well, we will move toward that,” he says. Reno writer Laura Newman’s book, Parallel to Paradise: Addiction and Other Love Stories, deals with regret, mistakes, hope, healing and death. A recurring theme is addiction, both to substances and behaviors, a theme Newman says she didn’t even notice until her editor pointed it out. “Addicts face a challenge,” she says. “They can die, get better or stay the same.” Her stories successfully explore each path.

While Newman has not suffered addiction, “unless you count Diet Coke and potato chips,” she jokes, addictions have been the focus of several projects she has been involved with professionally. Newman was instrumental in a public service campaign to expose heroin as a dirty little secret in the Northern Nevada region. The campaign won a silver Addy Award and a first place award from the American Marketing Association.

Newman spent the majority of her childhood in Tahoe, and the area is a significant source of inspiration. “In Reno, it’s easier to make a living, but Tahoe is really what keeps us here,” says Newman, who makes an annual circumnavigation of The Lake in a convertible. Many of the 14 stories in the collection offer glimpses of Lake Tahoe, where Newman’s characters vacation, find healing and where the deep blue of the water is hauntingly reflected in their eyes.

One such story is Angel Dust, which is Newman’s favorite of her own stories. “I like the transition from being an addict, facing it, and healing,” Newman says. Set in the late 1970s, the story follows a young man through the intense downward spiral of his addictions, his resolution to get help, detox in Thailand and the peace he is eventually able to find making a home in Tahoe.

Huffington Post featured Newman’s story Twentieth Century in its 50 Fiction series. The story is brief, evocative and raw. “I write my soul, but not my diary,” Newman says. “These are fiction stories.”

While one complaint offered by readers is that the collection could have used stronger editing (there are some misspellings and tense inconsistencies), the stories that make up Parallel to Paradise: Addiction and Other Love Stories are emotional, thought-provoking and entertaining. The book is available at Sundance Books in Reno, online at amazon.com and books.google.com, or, should you happen to meet Newman, from the trunk of her car.