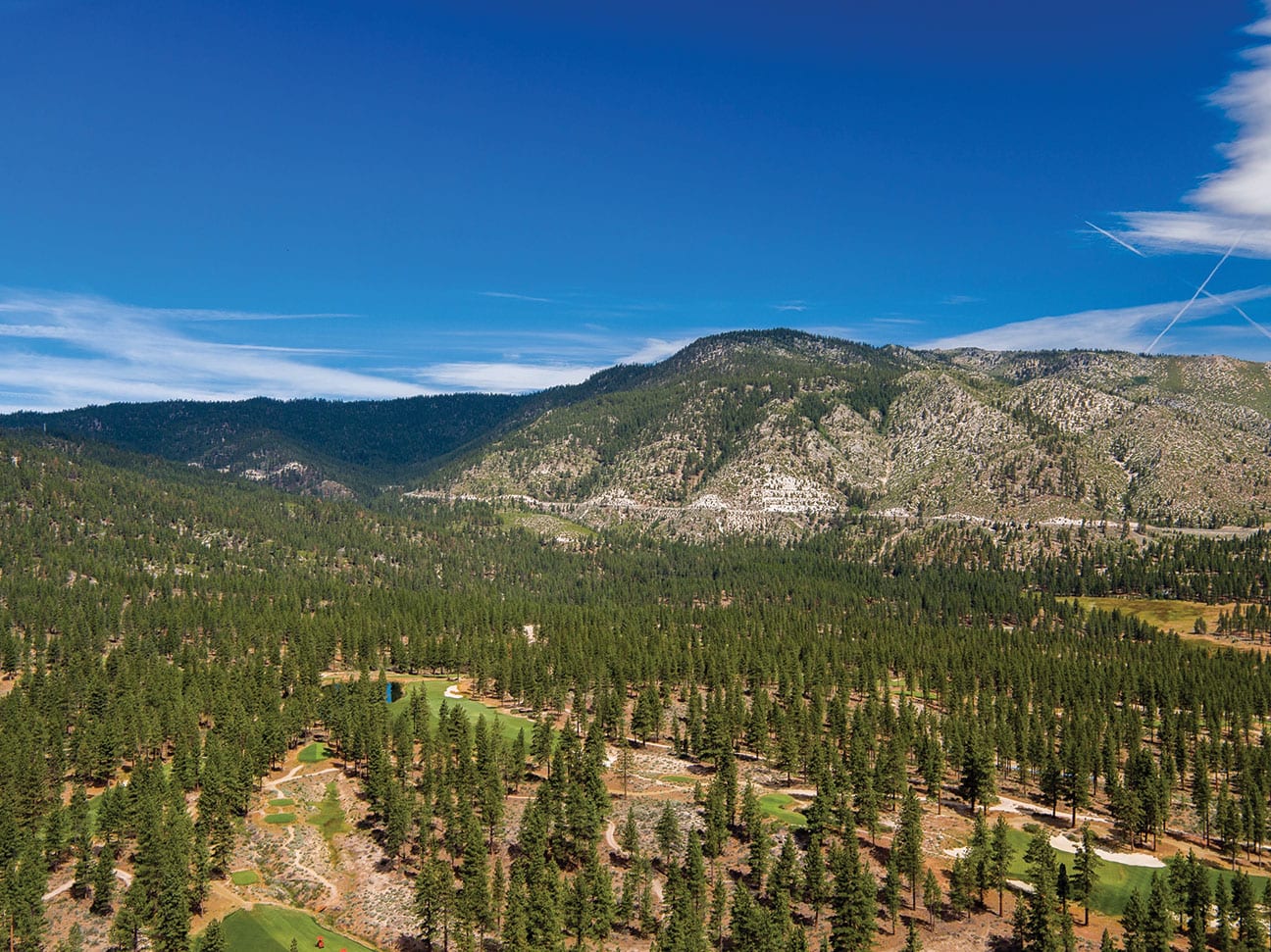 Clear Creek Tahoe and its Coore & Crenshaw golf course are tucked off of Highway 50 on the eastern slope of the Carson Range, a short drive from Lake Tahoe

Clear Creek Tahoe has long held a grand vision for its 2,136 acres of prime mountain real estate. With each progress-filled day on the heels of a busy winter, that dream is quickly becoming reality.

“Clear Creek has a lot going on,” says Mark Tanner, owner of Truckee’s Mark Tanner Construction. “We’re trying to work with as many architects and clients as possible out here, because we’re really excited about Clear Creek. It’s the next Martis Camp as far as I see it.”

Tanner is among a growing number of high-end builders and designers with projects underway in the emerging private community, which broke ground on new homes this past year and unveils its new Pro Shop & Provisions and Summit Camp amenities this spring.

“We recently started our fifth custom home and we have another 10 or 12 in the design stage. We’re starting to be able to show what the early products are going to look like,” says Keith Franke, Clear Creek’s director of development and design. “And by all accounts, the quality is superlative.”

These milestones are significant as the private golf club becomes a full-amenity, four-season destination that attracts custom homebuyers from across the globe. The Clear Creek dream arose more than a decade ago from a promising land purchase on the eastern slope of the Carson Range.

Tucked off of Highway 50 just east of the Tahoe Basin, the scenic valley provided an ideal setting for a golf course community—panoramic views from the Carson Valley to Spooner Summit, healthy conifer forests, rugged rock outcroppings, a lush meadow and Clear Creek itself, which winds 1.5 miles through the property on its way to the Carson River.

But with Tahoe’s housing market gripped by the Great Recession in the late 2000s, the timing was poor to launch an ambitious residential project. The Clear Creek team put the real estate development on hold but hired acclaimed golf course architects Bill Coore and Ben Crenshaw to design a world-class course.

Meanwhile, the club developed on-site hiking and mountain biking trails and placed 853 acres of its land into a permanent conservation easement with The Nature Conservancy. The club then added to its appeal by purchasing the historic Julia Morgan–designed Twin Pines Estate in South Lake Tahoe in 2016. The estate, located 20 minutes from Clear Creek, provides members access to a pier and over 180 feet of sandy beachfront, as well as shuttle service to nearby Heavenly in the winter.

With the Coore & Crenshaw golf course a hit among the initial members, and Tahoe’s housing market thriving, the club moved forward with its real estate plans early last year.

“The only thing we’re lacking is the built product on the ground, so it’s a good opportunity for people in the spec market to look at Clear Creek as a potential opportunity,” says Franke, adding that the community is attractive for its Nevada residency, and thus significant tax benefits for homeowners. “We’re seeing more Californians looking at Clear Creek. A lot of them want new construction, and they want the amenities that come with a private gated community.”

The club’s first phase of real estate features 121 estate homesites ranging from a half-acre to almost 5 acres in size, starting from $350,000. Located a short walk from the clubhouse, pub and grill, 56 cottage sites are also available, ranging from one-third to 1.7 acres and starting at $225,000.

“That’s the next big amenity,” says Ehlert. “We view it as the social heart of the community. As Clear Creek’s director of development and design, Franke brings experience from his previous roles with two private communities in Truckee—Martis Camp and Lahontan. While Martis Camp in particular set the bar high for custom home building in the region, introducing a more modern style to mountain architecture, Franke says the early designs at Clear Creek have been split between traditional and transitional Tahoe architecture. They also have a more distinct Northern Nevada feel, he says.

“I think it’s an interesting phase in the project because, as much as you might like to steer it, people have their own preferences, and Clear Creek embraces that as long as it’s a high-quality mountain home. So we are certainly exploring some regional distinctiveness,” Franke says, describing a sort of modern farmhouse look with a twist. “There are a couple of pretty cool homes using reclaimed materials and barn wood and trying to relate to that regional style that’s a little bit different than up at The Lake.”

The architects and builders behind the projects include a number of major players in the Truckee–Tahoe area—names like SANDBOX Studio, Kelly & Stone, Ward-Young, Ryan Group, sagemodern, NSM Construction and MTC Construction, among others.

“We’ve been purposefully trying to bring experienced, known commodities out here,” Franke says. “We want to make sure that the first homes that come through are laying out the standard, so it’s nice to have high-quality practitioners out here.”

Tanner is among the busiest of all the professionals working at Clear Creek, with multiple projects in the works and planned. He lauds the conducive building environment, from the relatively mild climate to the income tax advantages and shorter commute for his Reno- and Carson-based employees.

“You can work year-round because it’s warmer,” Tanner says. “We were putting in foundations in November and December, whereas we can’t do that in the Tahoe Basin or Truckee. That’s really refreshing and fantastic, because it helps us keep the prices down and keeps things moving along faster.