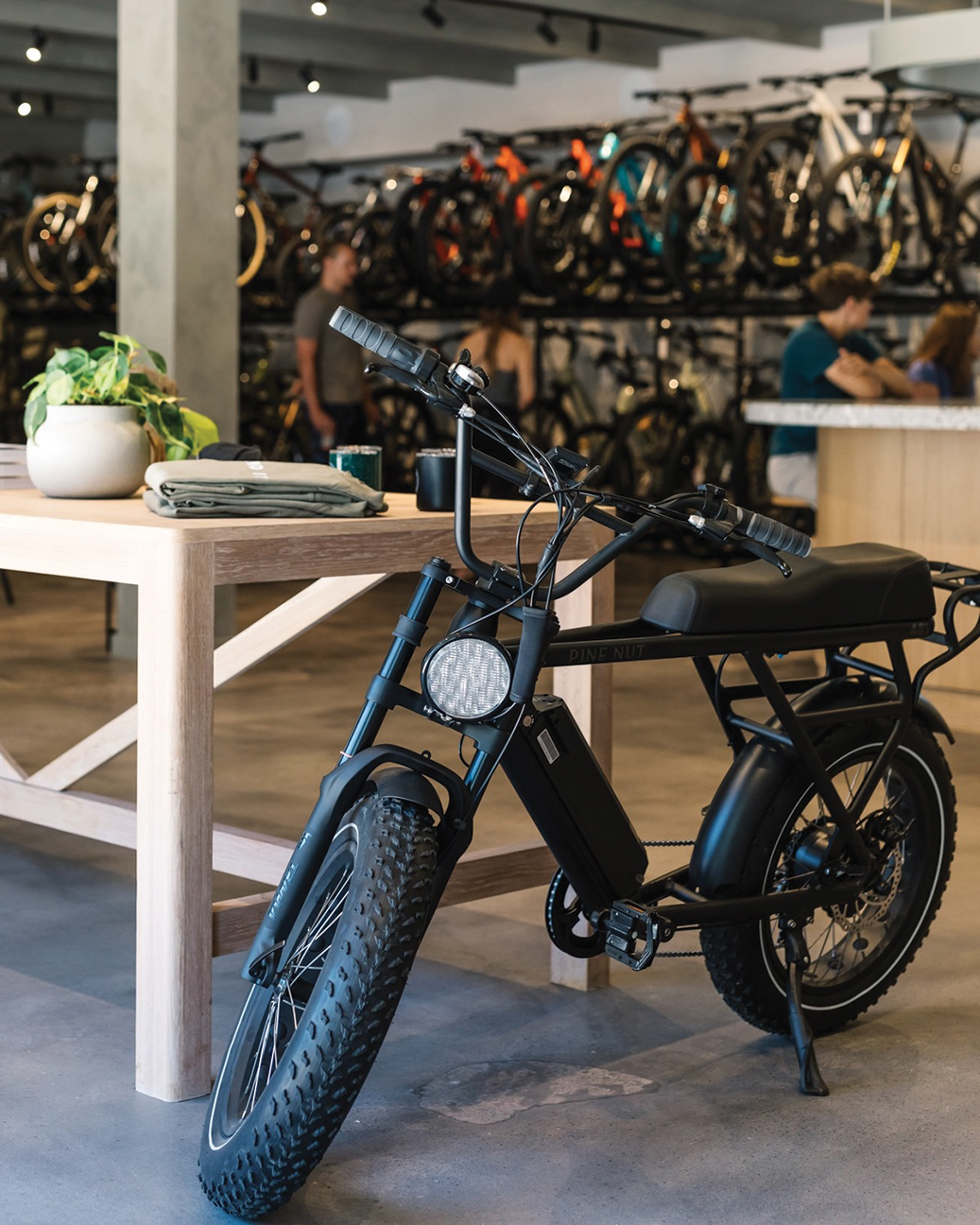 Editor’s note: Hours and offerings are subject to change due to COVID-19 conditions and restrictions. Check information directly with restaurant before heading out.

Long-running Austin’s Restaurant has rounded out its lunch and dinner offerings with some sweet and caffeinated treats. In addition to a full lineup of barista drinks made with South Lake Tahoe’s Alpen Sierra beans, look for signature sips such as matcha vanilla almond latte, teas from Davidson’s Organics in Sparks and scoops of Tahoe Creamery’s locally inspired ice cream that find their way into affogatos, milkshakes and freshly made waffle cones. Perhaps pick a piece of Austin’s famous pie, or opt for the “Piescream,” layered in a sundae glass with whipped cream and caramel sauce. $7–$10 (food)

Located on the second floor of the Boatworks Mall in the former Hacienda del Lago space, this spot named for its lakefront views offers a short Tex-Mex menu where tacos star: Grilled or fried fish gets citrus slaw, charred pineapple and chipotle crema, or choose from carne asada, crispy chicken, spicy shrimp and veggies in a spicy balsamic reduction. Save room for sides such as Mexican street corn and, for dessert, house-made churros with dulce de leche sauce. Drinks include the Boatworks Agua Fresca with Don Julio tequila, fresh watermelon juice, lime agave and mint, plus beer and a handful of wine options. L, D, $11–$25

Four friends who met 30 years ago in a bar on Toulouse Street in New Orleans (and have since launched eateries in San Francisco, Telluride, Chicago, New York and Washington, D.C.) opened this Big Easy–themed spot in the Station House Inn, replacing the late Lewmarnels. The menu here starts with pecan butter–slathered French toast and moves on to Cajun-inspired dishes such as gumbo, crawfish étouffée, poutine, blackened catfish po’ boy, hot fried chicken sandwich and, for dessert, bananas Foster bread pudding. Naturally, the bar folks know how to mix a brisk Hurricane, which can be sipped on the spacious dog-friendly patio. B, L, D; $16–19

Luca Genasci launched this outdoor backyard-themed spot between his AleWorX and Cocktail Corner in the Crossing shopping center at the Y. Burgers are named for backyard games, with ingredients sourced from local Overland Meat & Seafood Company—the Cornhole sports tomato, lettuce, caramelized onions, sauteéed mushrooms, arugula, basil aioli and Swiss with options to add egg, avocado or sub out beef for a bacon-blend patty. There’s also brats with beer cheese and jalapeños, plus fresh-cut fries served with a slew of dipping sauces. Patrons can also order any menu item from the other two restaurants. L, D; $11–$18

Located in the same building as sister store SUP Tahoe, this spot launched by owners Jessica and Brandon Miller offers a modern bright space to refresh and recharge while you’re waiting on your board or bike. Menu items include cold-brewed coffee, like the Lovely Day with a splash of coconut nectar and Tahitian vanilla, and nut milks including Biker’s Brekkie with cold brew, macadamias, cashews, maple and vanilla. Cold pressed juices and elixirs are made fresh daily in house from organic ingredients, as is the popular chia pudding parfait; Sugar Pine Bakery supplies sweet treats such as bear claws, muffins and croissants. Pine Nut’s bottle redemption program gets you 50 cents off your next purchase. B, L; $3.50–$9 (drinks)

Pals Mitch Penning and Scott Beck doubled down on their wildly successful Incline Village burger joint to open a new outpost in northwest Reno. Located in the former Dickie’s BBQ space in Raley’s shopping center and remodeled with contemporary rustic decor and Reno-centric artwork, the eatery offers 24 seats inside and 32 on the spacious patio. The short and simple menu remains focused on a single or double beef burger patty made from a custom Sierra Meats blend (Beyond Burger also available) topped with cheddar cheese, lettuce, tomato, grilled onions and special sauce served on a fresh sesame seed bun or atop mixed greens. The fried chicken sando and garlic fries have made the trip over the hill as well. L, D; $6.95–$10.50

This long-running, locally owned and operated Japanese-style steakhouse that was without a home after Harrah’s Reno closed last year has relocated to an 11,000-square-foot space in the Eldorado Resort Casino. In addition to the sushi and cocktail bars, the larger space accommodates 140 teppanyaki table–style seats where diners choose combos of filet mignon, lobster, shrimp, scallops, chicken and tuna, as well as Wagyu American–style Kobe beef. Some 25 wines are available by the glass and locals get a free birthday dinner—call for details and reservations. D; $32–$75

Chef-restaurateur Mark Estee launched this long-awaited pizzeria in the former Monaciello space (which before that was Blue Moon), where Local Food Group partner-chef Tommy Linnet oversees operations. Organic dough is fermented for three days and then punched into thin crust pies such as the Bee Sting layered with basil, mozzarella, Liberty artisan salami, serrano peppers, red onion and local honey and popped into the 600-degree Swedish oven. Detroit pizza fans will recognize the rectangular-shaped, tomato sauce–topped, caramelized cheese–crusted, square-cut pies also on the menu. Both styles of pizza are sold whole or by the slice, with gluten-free and vegan cheese options available. Buy your booze at the Loving Cup cocktail bar next door. L, D; $20–$30

In a deli déjà vu, Paolo Gaspari, former chef at La Famiglia, opened this counter-service spot at Lakeside Crossing across the street from the spot where he previously owned an eatery by the same name. This incarnation is operated by his nephews, who turn out hot and cold sandwiches such as the signature meatball sando topped with marinara and mozzarella, as well as a muffuletta stacked with salami, mortadella, provolone and olive spread. Eggplant parmigiana, cannelloni, lasagna and spaghetti with meatballs can be ordered to enjoy at one of the tables onsite or to take and bake. L, D; $7–$10

Owners Aubrey and Tyler O’Laskey launched this beautiful, light and airy bakery, cafe and retail space at the new Village at Rancharrah. While the original Midtown location remains open, production has relocated here, where mere mortals can watch the baking gods transform flour, butter and sugar. The all-day menu features Perenn’s heavenly breads and pastries, including breakfast bowls, sandwiches, toasts and plates such as bruléed croissant French toast with vanilla bean creme anglaise. Also look for salads of the panzanella, cobb, niçoise and salmon kale Caesar ilk, along with sandwiches from croque madam to BLT. There’s a full range of coffee drinks, plus wine and beer as well as a lovely outdoor patio. B, L; $11–$16.50

Sharing the space with Dorinda’s Chocolates, this Village at Rancharrah store is the second location in town (the first is downtown) to enjoy the Thai-inspired frozen treat that owner Dillon Vance discovered in Asia while serving with the U.S. Marines. The made-to-order confection works this way: Pick your base, either dairy or coconut milk, then add a flavor, from signature Belgian chocolate chunks and maraschino cherries to green boba tea. The ingredients, which are in liquid form, are poured onto a metal slab, frozen, chopped and rolled into rosettes of sorts and topped with goodies from graham cracker crumbs to gummies. L, D; $8–9

Joe and Bonnie France replicated their casual Virginia City and Mound House eateries in the refurbished former Saffron space on the corner of Corbett. The stained concrete floors, burgundy brick walls, vintage photos and meals served on metal trays here are meant to evoke Old Carson. Choose from some ten half-pound burger options plus cold and hot sandwiches such as French Dip with grilled onions and Swiss, a grilled chicken club and turkey BLT. Items fresh from the fryer include fish and chips made with hand-cut Icelandic cod, as well as garlic mushrooms, zucchini, onion rings and fries. L, D; $8–$13