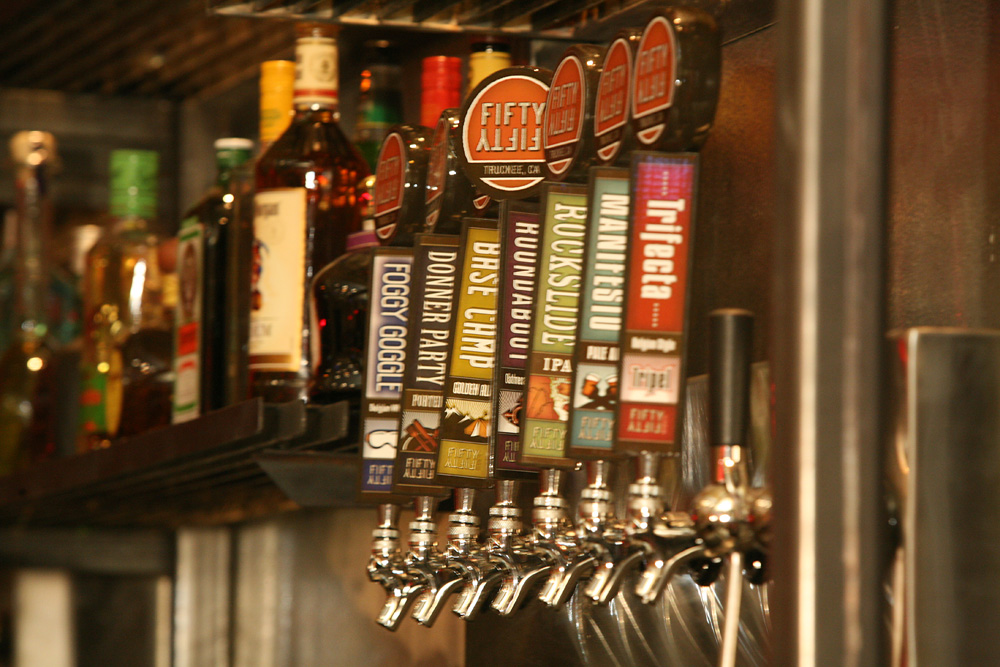 Posted at 07:10h in Food & Wine | From the Vault | Written by Alison Bender 0 Comments
Share

Originally published in Best of Tahoe, 2011

Benjamin Franklin once said “Beer is proof that God loves us and wants us to be happy.” A simple formula—malts, hops, yeast and water—Tahoe and Reno brewpubs are crafting their own versions of the beverage, quenching our thirst and bringing us bliss. From light blondes to dark stouts, enjoy a local tasting tour of what’s on tap.

Brewery at Lake Tahoe
“Drink Tahoe Brew” proclaim bumper stickers and apparel at this former 1930s residence, which now boasts brewing tanks in the bar. Try handcrafted ales like the Washoe Wheat, an unfiltered light beer, and the Paramount Porter, with a chocolate essence. The signature drink is the Bad Ass Ale, a burgundy colored beer with a high alcohol content that finishes smooth and is also used to flavor the Bad Ass Pizza dough. Happy hour runs Monday through Friday from 11 a.m. to 5 p.m., when brewery pints are $3.75 and specialty cocktails with names like Out of Bounds and South Shore Cosmo are also available. Grab a picnic table on the lawn in warmer weather. 3542 Lake Tahoe Boulevard, (530) 544-2739, www. brewerylaketahoe.com

Stateline Brewery
Pub-style tables and large metal brewing tanks adorn the otherwise industrial basement location at this Heavenly Village restaurant. A rotating selection of signature beers are on tap, including the Stateline Pilsner and the White-Out Wit, a wheat beer peppered with coriander and Curaçao orange peel. Those ready for something robust may want to try the Double Time Strong Ale, characterized by a “powerful dose of hops and abundance of malts.” 4118 Lake Tahoe Boulevard, (530) 542-9000, www.statelinebrewery.com

Mt. Tallac Brewing Company
This unpretentious spot, which is located off the beaten path and just celebrated its tenth year in business, is a locals’ favorite. Brewmaster Jeff Walker serves up a pale and amber ale year-round; seasonal brews include a porter, summer blonde and the Konehead, which is brewed from locally collected hops. Regular patrons are invited to leave their mugs on the walls. 2060 Eloise Avenue, (530) 541-7405

FiftyFifty Brewing co.
The outdoor brewing tank makes this spot in the Rock development impossible to miss. Belly up to the long bar to imbibe beers with names like Base Camp Golden Ale and Donner Party Porter (described as “sustenance enough to get you through those long, cold winters”), or enjoy your brew in the sunshine on the outdoor patio. Be on the lookout for Eclipse, an imperial stout that is aged for six months in oak bourbon barrels and released only once a year. 11197 Brockway Road, (530) 587-BEER, www. fiftyfiftybrewing.com

BuckBean Brewing Company
Named for an herb that grows in the Tahoe Meadows and mountain bogs, Buckbean opened in 2008. The space features three specialty microbrews by brewmaster Dan Kahn: the refreshing Original Orange Blossom Ale, the smooth and toasty Black Noddy Lager and the creamy Tule Duck Red Ale. The company also releases seasonal beers, such as the Oktoberfest Lager in the fall or the Black Adder IBA (India Black Ale) in the winter. Sip a sample before settling on a beverage; once decided, enjoy your drink of choice in a 64-ounce “growler” or served in 16-ounce cans, with the reasoning that cans are better than glass bottles for the environment, better preserve freshness and are easier to transport. 1155 South Rock Boulevard, Suite 490, (775) 857-4444, www.buckbeanbeer.com

Silver Peak Restaurant & Brewery
Opened in 1999 by Dave Silverman and brewmaster Trent Schmidt, Silver Peak pours six house brews and generally another six seasonal varieties. The Peavine Porter is complex with a chocolaty-coffee finish and the Silver Peak IPA uses Cascade and Mt. Hood hops to achieve a tasty bitterness. The restaurant is open for lunch and dinner; head up to the rooftop dining area in the warmer months. 124 Wonder Street, (775) 324-1864, www.silverpeakbrewery.com

Great Basin Brewing Company
Stating “Great beer will set you free,” Great Basin’s two restaurants (the original is in Sparks’ Victorian Square while the Reno location opened in 2010) serve up between 10 and 14 beers on tap daily. The Ichthyosaur India Pale Ale, named after Nevada’s state fossil, is accented with Cascade hops while the Truckee River Red is made with organic barley and hops. The award-winning Wild Horse Ale is malty and rich and pairs well with the extensive lunch and dinner menus. 846 Victorian Avenue, Sparks, (775) 355- 7711; 5525 South Virginia Street, Reno, (775) 284-7711, www.greatbasinbrewingco.com

BJ’S Restaurant and Brewhouse
Come for the beers, stay for the deep-dish pizzas, large-screen TVs and plenty of booth and table seating. With one location in Sparks and another in the Summit complex near Mt. Rose Highway, this restaurant—which has about 100 locations across the country—sells about a dozen craft beers on tap, from the dry-hopped Piranha Pale Ale to the heavier, full- bodied Tatonka Stout. 13999 South Virginia Street, Reno, (775) 853-7575; 425 Sparks Boulevard, Sparks, (775) 398-3550, www.bjsrestaurants.com

Brew Brothers
Located in the Eldorado Hotel Casino, Brew Brothers offers eight craft micro- brews and live music on weekends. The award-winning Redhead Amber Ale is smooth with a hint of chocolate while the Gold Dollar Pale Ale contains tropical and citrus overtones; sample them all for $7. Salads, burgers, pizzas and other fare round out the menu; karaoke and ladies’ nights are also on tap. The brewery makes its own root beer. Those who need one for the road will find another location at the Reno-Tahoe International Airport. 345 North Virginia Street, (775) 786-5700, www.eldoradoreno.com