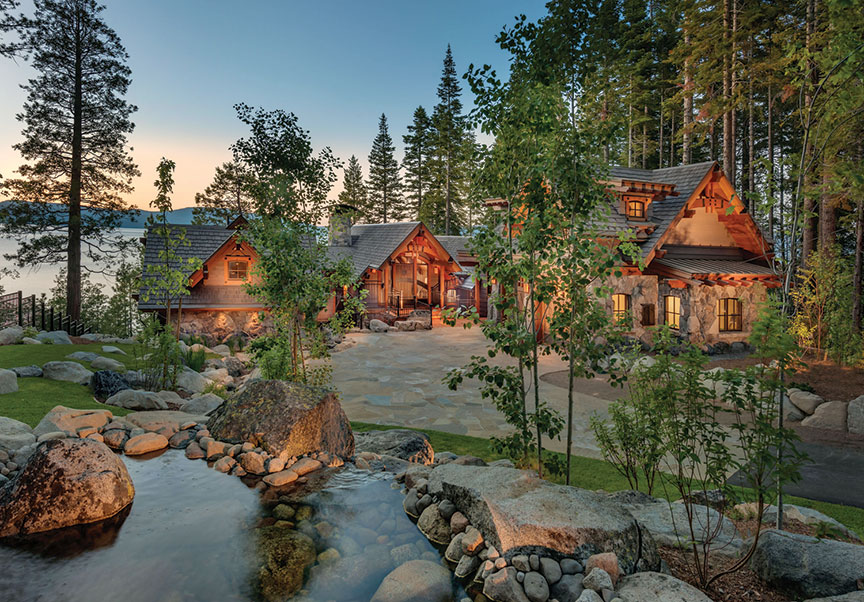 Every Thursday for two and half years, Bill Parker met with the team, to include designer Scott Gillespie of SANDBOX Studio and project manager Seth Kielas of Loverde Builders, working on his West Shore residence. Though a real estate developer in Sacramento, Parker and wife, Sue, had never undertaken a new build of their own. They wanted to do it right. “Lots of people hire a team and go up there once a month or once every couple of months,” says Parker. “We thought, let’s go create something ourselves.” 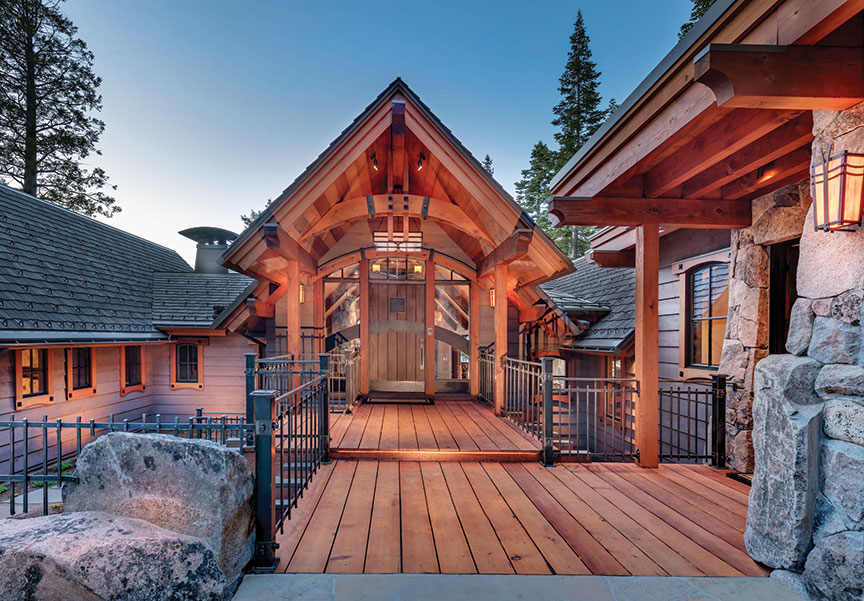 A water feature flows under the bridge leading to the home’s main entrance, giving off a
feeling of tranquility and masking highway noise

“Bill wanted a home to the program of 7,000 square feet, but he wanted it to be understated,” says Gillespie. “We tried to break down the massing and step it with the topography to root the house in the earth. From the street, it reads as a collection of cottages.”

Though the exteriors of the main and guest houses match—a mixture of weathered granite and 80- to 100-year-old redwood from an old mill and supplied by Yankin’s Reclaimed Lumber—the two buildings have distinct personalities. The guesthouse was built first and the Parkers resided there while working on the main house, which allowed them “to get their feet wet,” says Kielas. “They could find out what they liked and what they didn’t like.” Dark hickory flooring, a large stone fireplace, interior trusses and distinct details such as the vessel sink, hand-carved and polished from a stone found onsite, all hark to an Old Tahoe style. 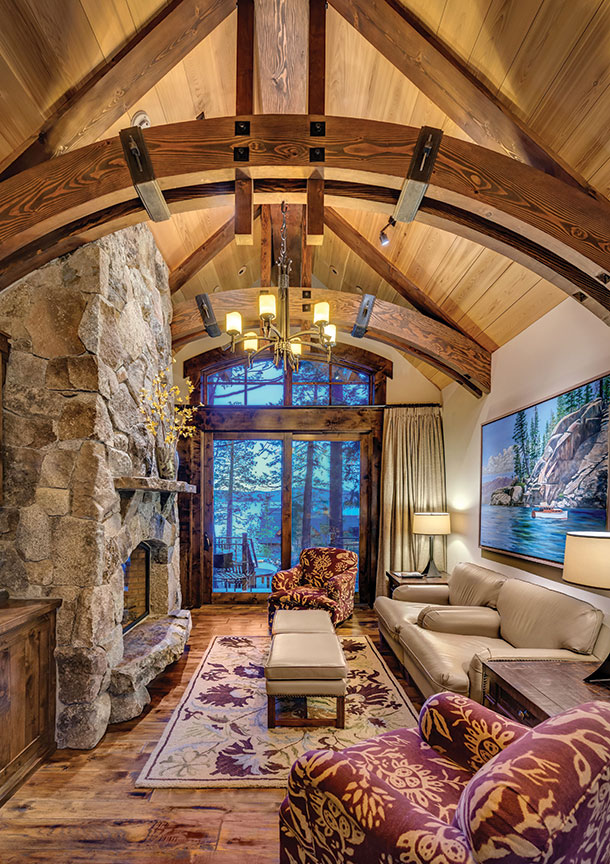 As construction—and the weekly meetings—continued, the Parkers’ style evolved from the area’s traditional architecture to something slightly more contemporary. Their daughter had just begun college in Boston and the couple bought design magazines from their frequent trips cross-country. Thus, the interior of the main house is inspired by architectural styles from near and far: Layovers in Denver resulted in the picture-frame trim around the windows. A visit to a lounge at New York City’s Plaza Hotel was the basis for the color kinetics light system that illuminates the long bar. “We’d get ideas from other places and modify them a little bit,” says Parker.

One such idea was the arches, a theme carried throughout both houses and noticeable even in the front door and wall sconces. Every arch has the same radius, the interior arches concentric with the exterior arches. “It’s not just slapped up,” says Kielas. “Everything has a relationship.” Parker got the idea from an estate he once visited in Rome: From a keyhole, one can look through the house; the arches align and, miles away, frame a view of the Vatican. At the Parker residence, when the doors are open, one can look from the arched gate at the street, the view aligning with the arch of the home’s front exterior, the three arches of the great room and the arch of the back window, ending by framing Parker’s buoy in The Lake. “All are symmetrical and all flow together,” Parker says. 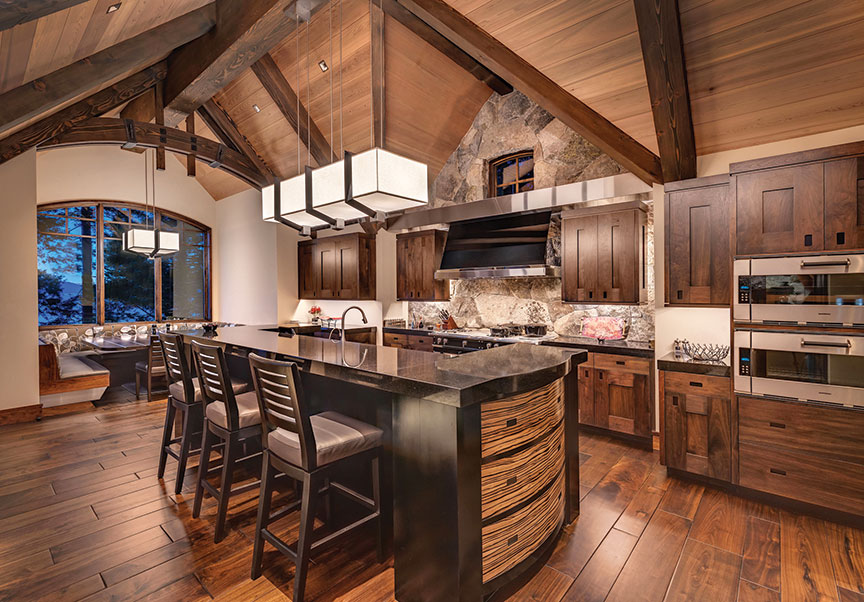 It’s these rich details—abundant throughout the property—that make the Parker residence truly outstanding: A soaking tub in the master bathroom is cradled by a unique square log base. Wood grains were meticulously matched even in mitered corners for a continuous look. Grass Valley’s Fred Quinterno custom-designed the cabinetry using walnut and zebra woods; Quinterno also designed tables, beds and other furnishings. The tilework, to include the showers made of granite slab inlaid with tile accents, as well as the vanity sinks, are by Hazel Tile & Granite in Verdi.

Stonework was completed by Truckee’s Johansen Masonry. In the great room fireplace, the stonework is so precise that it looks almost dry-laid. Exterior rock walls are carried inside as an accent wall in the master suite and in several guest rooms, as well as a backsplash in the kitchen. On the cabana level, the interior flagstone that butts against the patio door matches with the patio’s exterior stones—a detail that wouldn’t even be noticed had it had been ignored, but stands out in its execution. “This is the sign of a great craftsman,” Kielas notes.

Nancy Jones Lighting designed the intricate lighting systems; the fixtures were custom designed, as was the dining room table, a silky, 1,500-pound slab of black glass. “It took about 15 people to get it in,” laughs Parker, noting that 11 of those were professional movers who called the table the single most difficult thing they’ve ever moved. “It cost as much to get it delivered as it did to get it designed.” 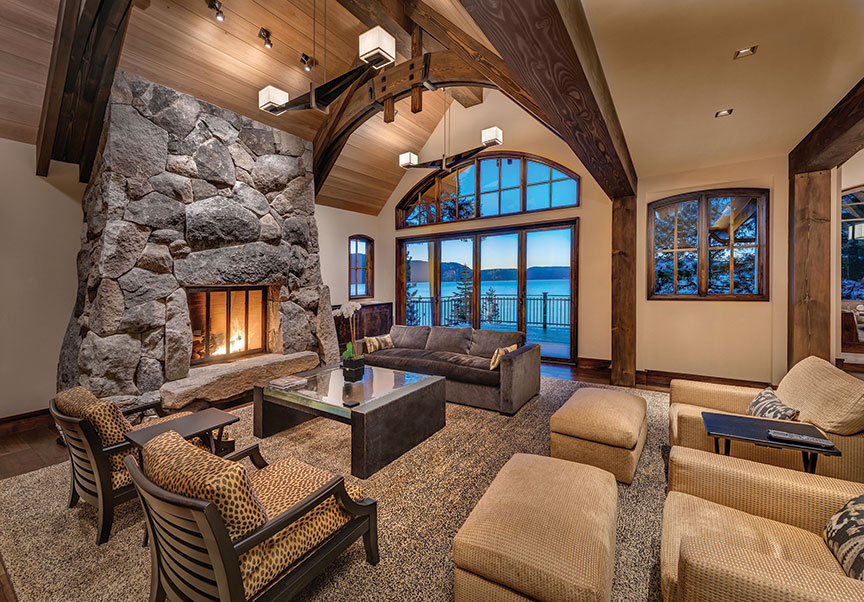 The home’s lakefront location meant adhering to stringent Tahoe Regional Planning Agency (TRPA) regulations. “Scott did a great job on the plans; TRPA didn’t change a thing,” says Parker. Gillespie credits Jan Briscoe, TRPA’s private party consultant. “She navigated the permitting for us and got us our approvals in record time,” he says.

In fact, TRPA was so impressed by the project that the landscaping was slated to win a TRPA Best in the Basin Award this February. “I’m really happy we’re getting that,” Parker says. “It means that we went by the rules and we aren’t violating The Lake.”

The original landscaping was designed by L&P and installed by Rare Earth, with additional landscaping designed by Betty Fulda and installed by Green Envy. Rare Earth also constructed the streamscape that runs from just below the guesthouse; it cascades down the property to end at a boulder-lined grotto underneath the home’s entry bridge. “The water feature ties the guesthouse to the main house,” says Gillespie. “It makes it feel like one.” Reverence to the environment was important to Parker. “We didn’t want something that, from The Lake or the street, stuck out,” says Parker. “From the highway, you can see over the house to The Lake, so everyone gets a view.”

This attitude earned him the admiration of his team. “He is extremely principled,” says Kielas, noting an exterior staircase that originally blocked a guestroom window was designed and redesigned until it was relocated to the side of the house. “The idea of a guestroom looking at a staircase mattered to him.”

It was these principles, the teamwork approach, the enthusiasm of those involved, the visiting and revisiting of every detail, and the efforts by the area’s best craftsmen that makes this one-of-a-kind home so rich and refined.

“When someone is this passionate about the detail and really wants to be involved, it gets everyone else more excited about it,” says Gillespie.