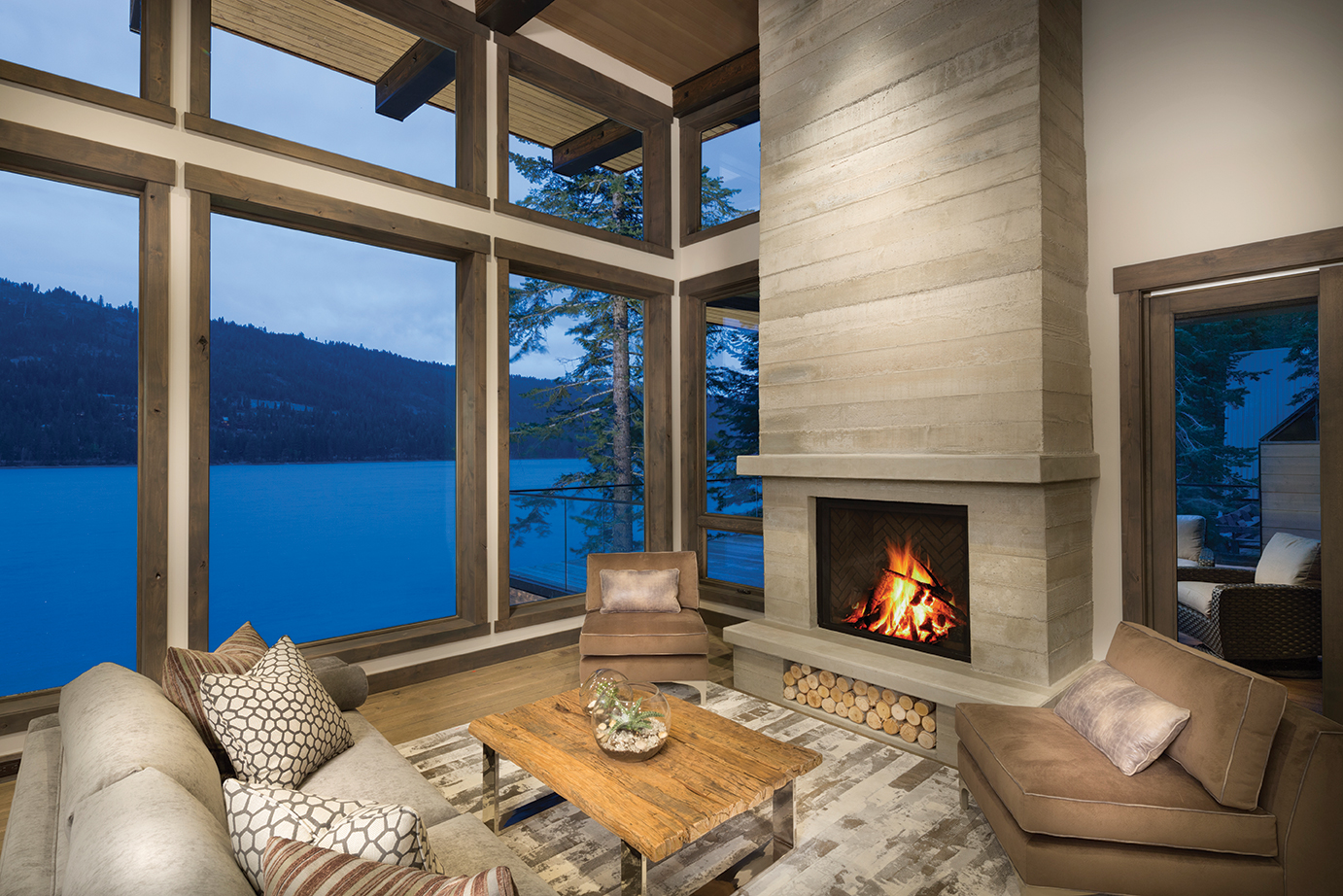 The “dark side” of Donner Lake isn’t a figurative reference to the area’s infamous history, but a literal reference to the three-mile-long lake’s south side, which is backed by a tall, steep forest shadowing homes and dropping the temperature quicker than on the sunnier sections.

“Every afternoon in the summer, there’s this wind from the west,” says architect Jason Wooley of Truckee’s Lot C Architecture. “It creates this constant wind, always in the same direction. It can make things cold.”

A Tiburon-based homeowner (who prefers anonymity) commissioned Wooley to build a vacation house on the south side of Donner Lake. A young family, including two teenage children, with a passion for boating, tubing and other water sports, the homeowner wanted the house to emphasize this connection with the lake.

“The goals for the exterior of the home were to build a distinctive mountain retreat, using modern lines and rustic materials to blend seamlessly with the lakefront site,” says the homeowner. “We endeavored to save as many mature trees as possible and worked the design to have a finished feel of having had the house dropped into its location on the site.” In addition, they wanted a clean and contemporary feel, with a blend of raw, rustic and sleek materials.

The homeowner also worked as the builder on the project. “Our involvement in both the design and build may have lengthened the process somewhat,” he says. “Working closely with some very talented subcontractors allowed for design/build adjustments and refinements throughout the process that made a great design even better.”

Designed to conform to the natural elevation of the terrain, the home features a stepped floor plan—from the entryway down into the kitchen and dining area, then down again into the great room—allowing the focus from all spaces to remain on the landscape out the windows. “You have this stepped up feel, looking over everyone’s heads into the view,” says Aspen Leaf’s Marcio Decker, who was the lead designer on the project. “It’s a clever move from Jason.”

The spacious entryway has a durable porcelain tile floor, which adds texture and strength as well as a contemporary element. A granite wall is accented with a massive mirror and steel frame that appears to pierce a cantilevered bench. Here, as throughout the home, the design features monochromatic neutrals and clean, straight lines. “We’re borrowing elements from the architecture,” says Decker. 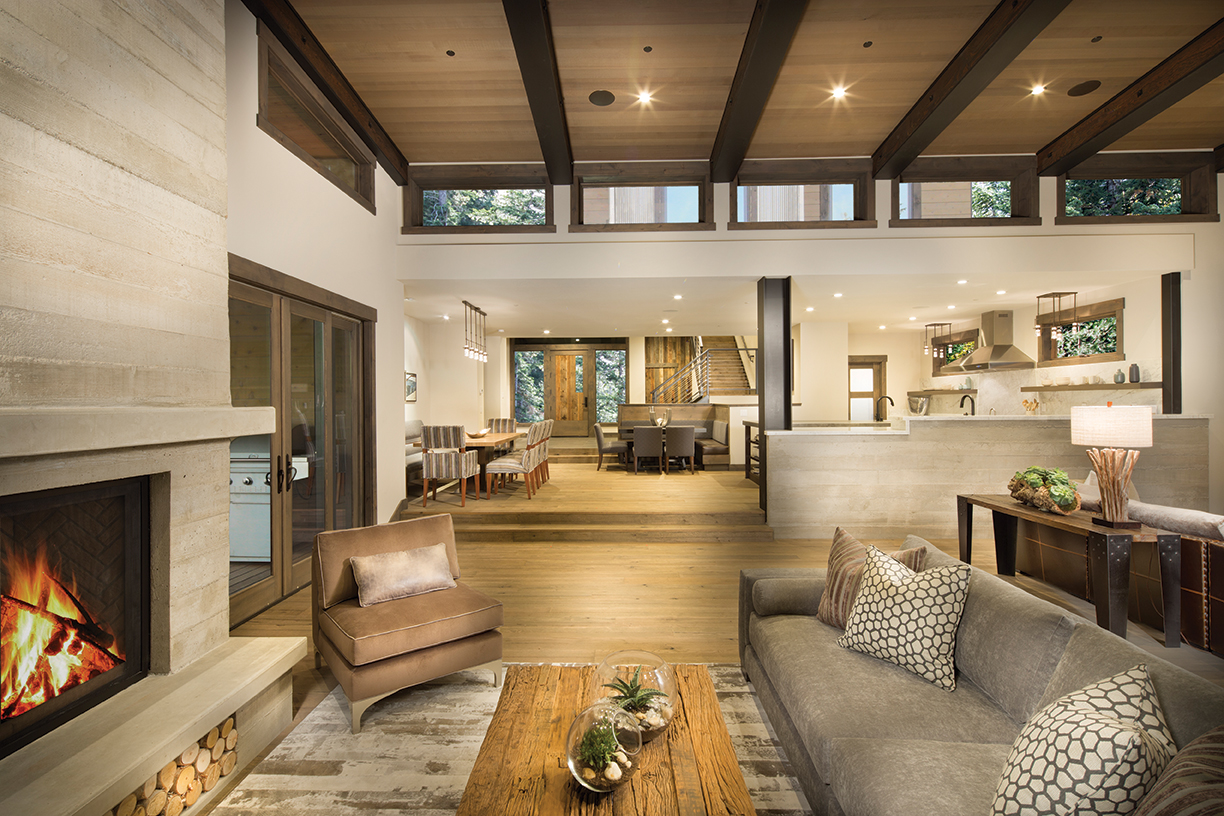 Differences in elevation mark the dividers between the great room and dining room. Windows above the room
actually provide views out to Donner Lake from the home’s bedroom wing, which looks down through the
great room and out to the water

On this same level is an upstairs mudroom off the two-car garage, a laundry room and a powder room. The powder room features whimsical colored tiles, found at Truckee’s Home Concepts, which are made from recycled brick; the faucet fixture is mounted into the mirror and a wood waterfall vanity completes the look.

A few steps down, the minimalist kitchen seems sparse but was kept deliberately open—quarter-sawn oak cabinetry with a gray wash is topped by quartzite countertops and a matching quartzite backsplash. The pewter-topped island adds a decorative element, as well as plenty of storage space. There are no upper cabinets, only a simple floating shelf, which allowed Wooley to include windows against the west wall, a decision that adds to the airy lightness of what could have otherwise been a dark, cave-like space.

Major appliances, such as the refrigerator, toaster and wine cellar, are hidden from view in the butler’s pantry. “When I have the room, I love to include a butler’s pantry,” says Wooley. “This allows for some appliances to stay out on the counter yet not clutter the main counters.”

The dining area features a breakfast nook as well as a separate dining table made of bleached walnut, alder and steel, custom-designed by Aspen Leaf.

From here, steps lead down again into the open great room, which offers several cozy seating areas, high vaulted ceilings and a magnificent wall of windows that gives the appearance of floating above the water.

“Even I was blown away,” says Wooley. “You are really looking right into the lake; there’s nothing in the way. It feels like you are standing right on the edge.”

He situated the great room to maximize the connection with the water, he says. “The typical lakefront house has a situation where the deck is as close to the water as possible. Behind the deck is the great room, with a guardrail in the way of the view.”

In contrast, Wooley pushed the glass wall of the great room as close as possible to the lake. The deck is situated to the east, which allows the massing of the great room to shield the outside area from the westerly afternoon winds. A double board-formed concrete fireplace features two hearths—one opening inside to the great room, the other opening out to the deck.

“I feel like people don’t use outside decks on Donner as much as they would like, especially if they just got out of the lake,” says Wooley. “[The homeowners] have a wind-protected deck, but they also have the most exposure to the lake as any other home there.”

The deck cantilevers out past the walls of the great room and the railing is glass to further minimize the interruption between the viewer and the view. Comfy outdoor chairs allow the homeowners to cheer on family and friends as they go boating or tubing by on summer days, or to enjoy the fire while watching the setting sun reflect in the water on autumn evenings.

“We have the feeling of being able to step out of the great room right into the lake,” says the homeowner.

Because of the home’s location among the towering trees, one difficulty Wooley faced was incorporating natural light, a challenge he met by adding windows wherever possible. In the great room, a line of windows located above the massing of the kitchen not only lets in light, but also yields views of the trees beyond. “I felt like it was pretty important to get some small high windows, so if there’s any southern light to be had, they can get some daylight,” says Wooley.

The master suite is located on the main floor of the home, off the dining area. Here, a gray grasscloth wall covering adds texture, as does the upholstered headboard, while continuing the home’s theme of neutral tones. The bed frame is a bleached walnut designed by Aspen Leaf, and the room includes a fireplace and access to the deck.

The master bathroom features an under-mounted tub as well as a unique ‘ribbed’ design of limestone, slate and glass tile in the steam shower, which again allowed the team to include windows—for both light and the views of the forest—in a space that could have potentially been much darker. “Every window feels like it’s got its own painting—the gorgeous trees, the lake view,” says Decker. Cylindrical light sconces are mounted on the mirrors, the faucets are wall-mounted for a clean, simple look and cabinetry is a rustic, wire-brushed pine from Home Concepts.

“Wood, stone, metal and glass are materials you see repeated throughout,” says Scott.

The top level of the home features a smaller footprint, but incorporates a bunkroom suite and a guest suite. A library, complete with built-in bookshelf, offers a daybed-like reading bench. From here, cleverly placed windows allow the reader to peer down through the great room’s upper windows and out to the lake below.

On the lowest level of the home is the game room, with reclaimed oak flooring, a billiards table, long bar and large sectional seating area facing a granite fireplace and flat-screen TV mounted on a picklewood wall. The two kids’ rooms flank this space, and sliding doors open the game room to the paver patio, which also features a hot tub, fire pit and access to the pier. 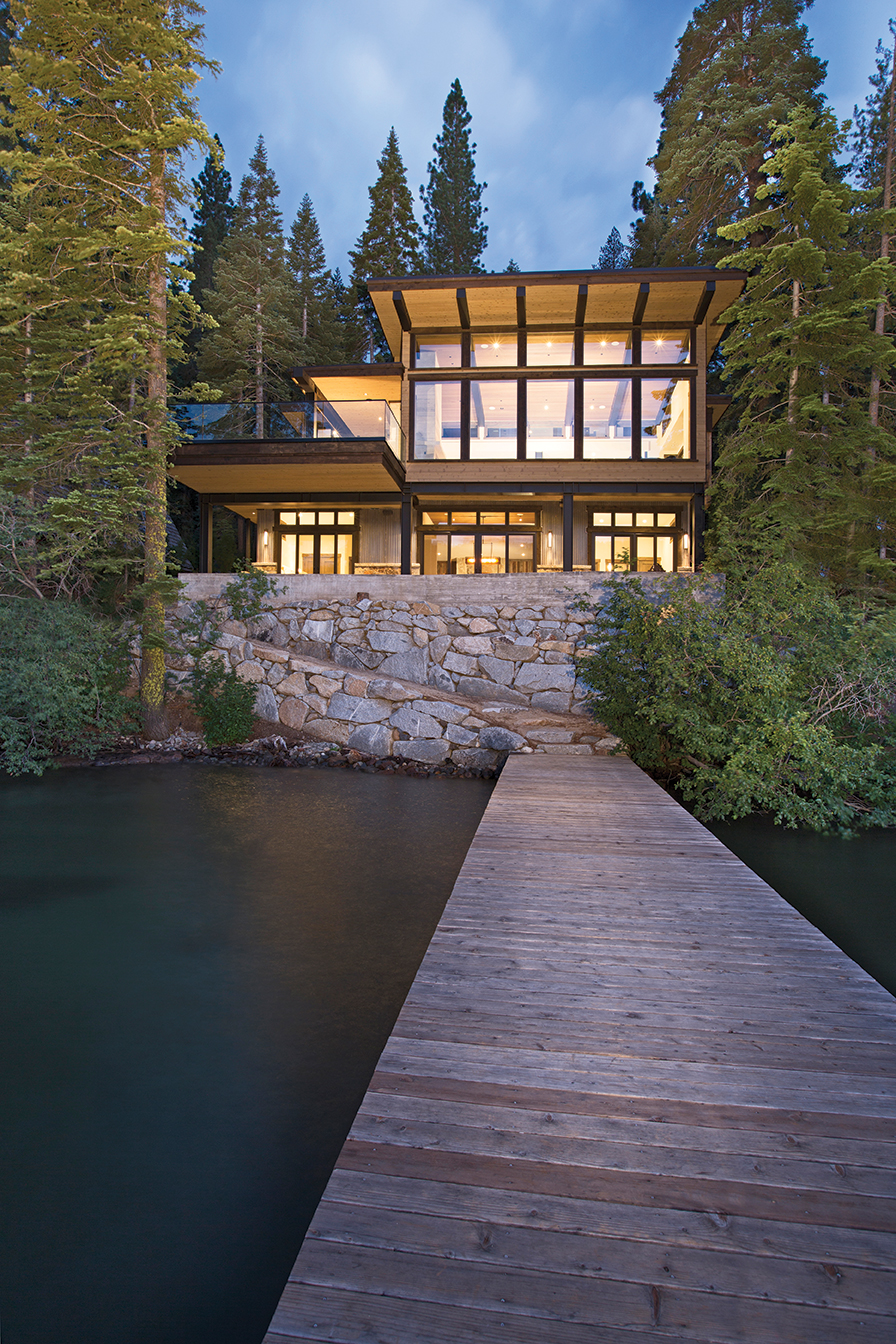 “The game room was very important to the clients,” says Scott. “They wanted easy in-out access to the lake.” Porcelain tile and board-formed concrete with a floating bench create a hardy palette for the downstairs mudroom, which has a door to the outside as well as access to a bathroom and shower for family members and friends returning after a day  on Donner Lake.

This thoughtfulness of design—situating a shower near the mudroom—is consistent throughout the home. The spaces are considerate of the family and how places will be best used. For example, the upstairs library—high above the rest of the home—is a quiet place to read or think. The great room transitions effortlessly to the deck, while the downstairs game room, outside of the teenagers’ rooms and accessible to the outdoors and a variety of water sports, is perfect for when the kids have friends along.

The exterior features a palette of rich materials that were chosen to suit the homeowners’ desire for rustic yet clean finishes—cedar siding contrasts with corrugated COR-TEN steel and reclaimed picklewood, while the base features standing seam metal roofing and granite stonework.

Construction took about two years and was finished in late summer of 2014. “We had a great team of people,” says Wooley, praising Aspen Leaf Interiors as well as the various subcontractors. “It was a large team effort to pull it all together.”

The completed building is a astounding, three-story glass masterpiece. “The final result exceeded our already high expectations given the fabulous site with which to work,” says the homeowner. “We love the way views and light are captured in myriad ways from many vantage points in the house. We appreciate the way the house integrates with its surroundings when viewed from the site and also from the lake vantage.”

And, the homeowners aren’t the only ones who appreciate the structure.

“The house is spectacular, and it’s unexpected at Donner Lake,” says Scott. “People see it from the lake, then come and knock on the front door to get a closer look.”

It would appear that, for a stunning lakefront, there are plenty of people who will cross over to the dark side. 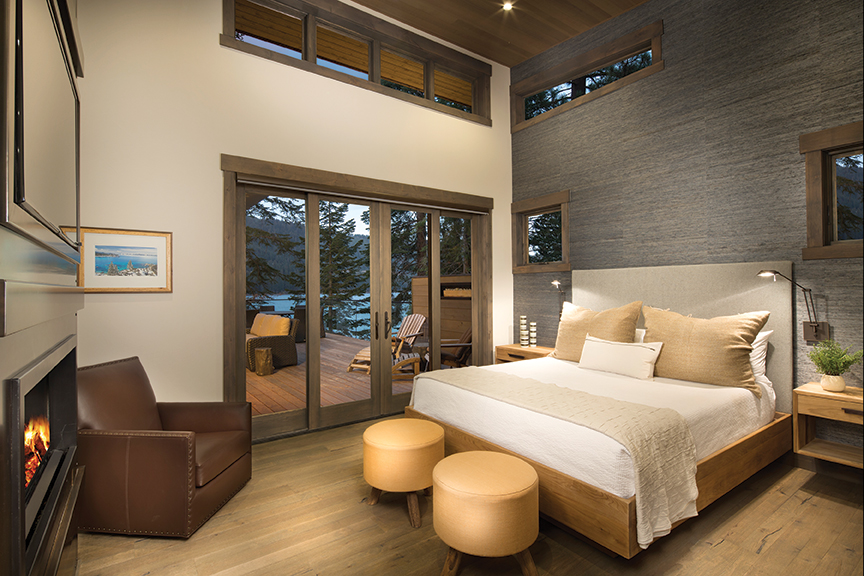