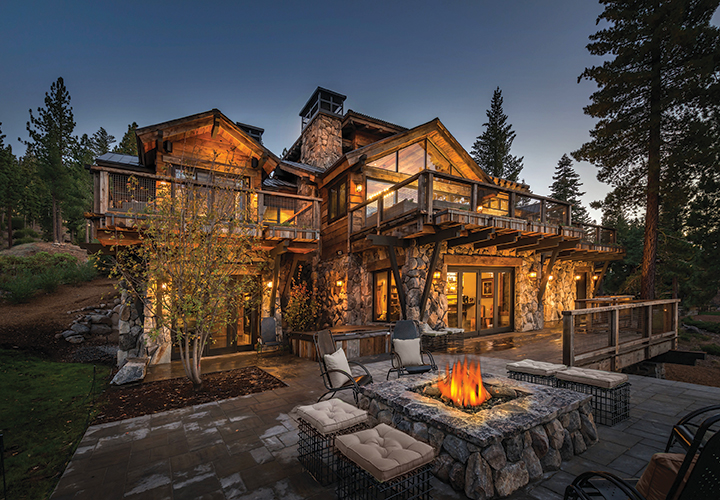 Built to entertain visitors, the back deck area features ample seating around a fire pit

To say that Eric and Tarah Byrnes hit a home run with their Martis Camp house would not be an exaggeration: Eric is a former Major League Baseball outfielder who played for the Oakland Athletics, Colorado Rockies, Baltimore Orioles, Arizona Diamondbacks and Seattle Mariners, and is now an analyst for MLB Network and KNBR radio host. Tarah previously worked in the San Diego Padres community relations department and is a former Miss California.

“Our primary goal in building our home was to create a place for our family to enjoy,” says Tarah. “Our immediate family is five, but we often gather in groups ranging from 25 to 53 (our record for a family Christmas). We wanted to create a place that could feel at home for just us, or all of us.” 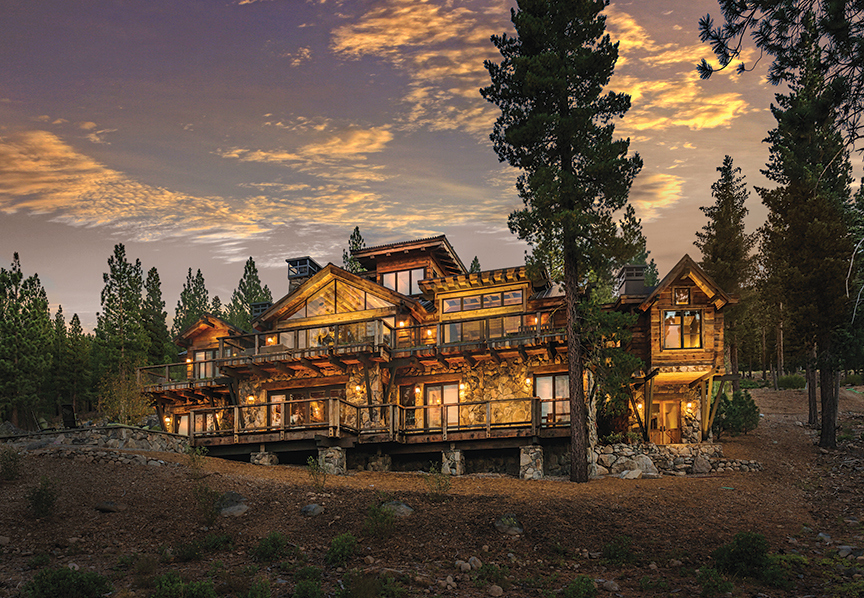 The home’s many outstanding features begin with the 75-foot manmade stream that runs from the lot’s edge, descends along the front of the property beneath a bridge and seems to disappear into the house clad in reclaimed barn wood. Near the hefty metal and glass pivot front door stands a totem pole featuring animal carvings representing each family member, and a chair from the old Cornice 2 lift at Squaw Valley.

“Tarah directed the look and feel of the house, which she wanted to imbue with a sense of history,” says Gillespie.

“We strived to give our home a sense of ‘authenticity,’” says Tarah. “It was a primary goal to keep as many trees as possible, use those that were removed in the build process, and we sought out stone from a local quarry. Our hope was to build a home that looked like it had been there forever and would be there forever. Yet, we are a modern family that gathers in large groups. We ultimately developed a rustic aesthetic that was inseparable from an open and more modern layout.”

Enter the mudroom, where railroad spikes serve as coat hooks. “I have had a collection of spikes for decades,” says Tarah. “I also worked with our build team to add more as needed.” Overhead, a patchwork of pre-patinaed steel squares harks back to an earlier time. Underfoot, concrete floors are poured at three times more than normal for durability and dotted with ironite rock deposits and a black stain.

“Each material was carefully selected to maximize durability,” says Tarah. “We knew we would really live in our home, and needed it to be tough.” Beyond their three young kids, the couple also owns a trio of bulldogs, for whom they installed an electronic doggy door configured to their squat statures.

In an architectural oxymoron of sorts, the nearby powder room sports a urinal, custom-made by Kohler, to match the bone finish sink and toilet. A baseball player lives here, after all.

The open, three-story stairwell is a fine example of form following function. Anchored by a board-formed concrete wall complete with waterfall, hot-rolled steel tinted blue with a Perma Shield finish forms the balusters and rails, including the stairwell screen wall. Laser-cut 1.25-inch-thick stringers hold the open treads made from fir found near Auburn; the integrated light housings and cover plates concealing threaded stud and bolt were custom forged by Matt Lund, who owns Metal Matrix in Kings Beach. The wood posts were constructed from cutoffs salvaged from the reclaimed barn wood exterior siding.

The staircase tops out at the “radio tower” on the third floor. Designed similar to an air traffic control tower or fire lookout, this perch boats 360 degree views, in this case out to the Martis Valley and Carson Range beyond. Surrounded with soundproof glass, the office doubles as a broadcast booth from which Eric can beam his radio programming without leaving the house. Glass doors lead to a balcony where the steelwork repeats in the railings and views overlook the stream. 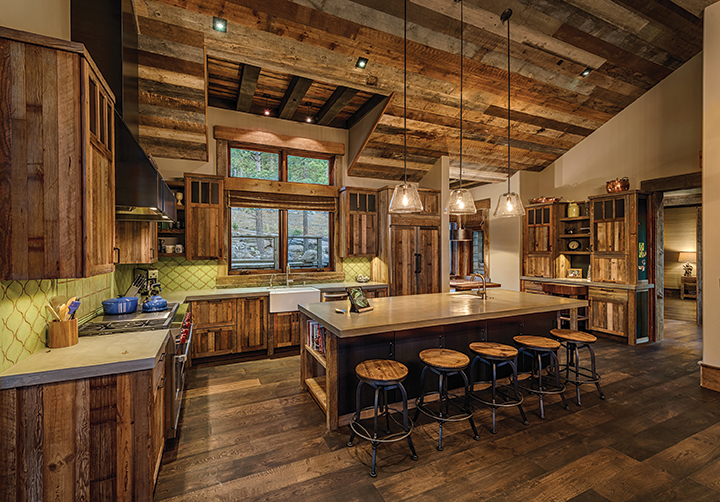 Durable finishes were a key for the Byrnes family, which includes three children and three bulldogs

The walls in this aerie domain, as elsewhere around the house, are lined with professionally framed memorabilia—photographs, newspaper clippings, tickets, jerseys—that both highlight Eric’s career and pays homage to sports greats on a grander scale. Surrounding sightline flat roofs are topped with a polished river rock type of stone rather than standard gravel.

Back in the great room on the main floor, other unique touches include a wall treatment in homage of Tarah’s affinity for hunting, made from steel framing and 15 deer hides from animals shot by Tanner’s employees.

In the dining room, the handsome wood slab table came from a discarded piece of walnut Tarah had seen lying by the side of the road near Half Moon Bay. Tanner retrieved the downed slab with his truck; his mill shop turned the lifeless wood into a beautiful and functional piece of furniture.

Down a hallway off the great room and tucked behind a barn door, the en-suite master bath pulls together and repeats the home’s palette of textures and colors in a spa-like space. The spacious rectangular shower constructed from board-formed concrete, pebble flooring and multiple showerheads occupies one wall; a floating tub has a view to the outdoors. The vanity is built from reclaimed barn wood and topped with a pair of vessel sinks, while the wall above is lined with ledgestone and two oversized mirrors. Another set of barn doors leads to the walk-in closet that includes a built-in bench with storage. Wide plank reclaimed white oak lines the radiant-heated floor. 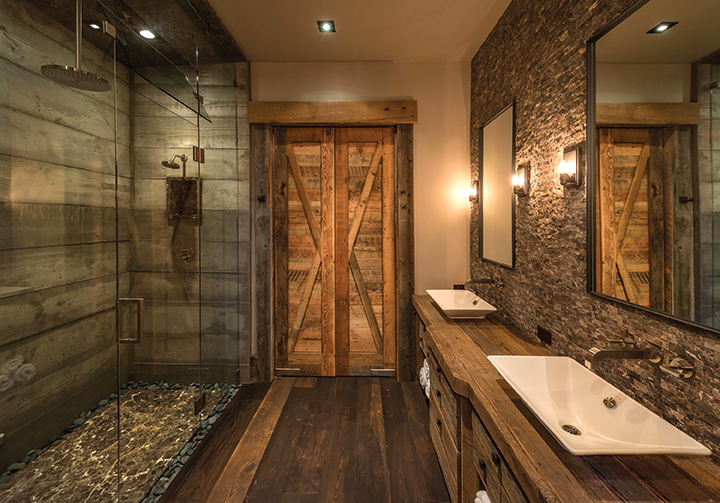 Downstairs, a pair of boy and girl kiddie bunkrooms awaits. The built-in stacked sleeping quarters each have a cubby, electrical outlet and lamp, and the rooms boast built-in desks and closets. But the coolest feature by far is the way the rooms connect—not through a typical Jack-and-Jill bathroom, but through a tree. At Tarah’s behest, Gillespie designed the structure using a 42-inch log from the Auburn area that was debarked and skinned, hollowed and cut in half. The trunk was so big that it had to be installed prior to framing. Little people can pass through the tree via a set of swinging doors on either side. Tarah added manzanita branches she found on the site.

Last, but certainly not the least exceptional element of this house, is the decked out man cave/rumpus room on the lower level. A 14-foot walnut slab bar (from the same wood used on the dining table upstairs) serves as the focal point and is backed by a parquet pattern of reclaimed barn wood cutoffs. Custom shelves hold additional sports collectibles as well as a Miss California sash and crown, and there’s a pool table and multiple television screens—including Eric’s curtained-off VIP nook complete with couch and TV. From here, it’s a short walk to a small detached gym outfitted with a sauna and doors that can be thrown open to the elements.