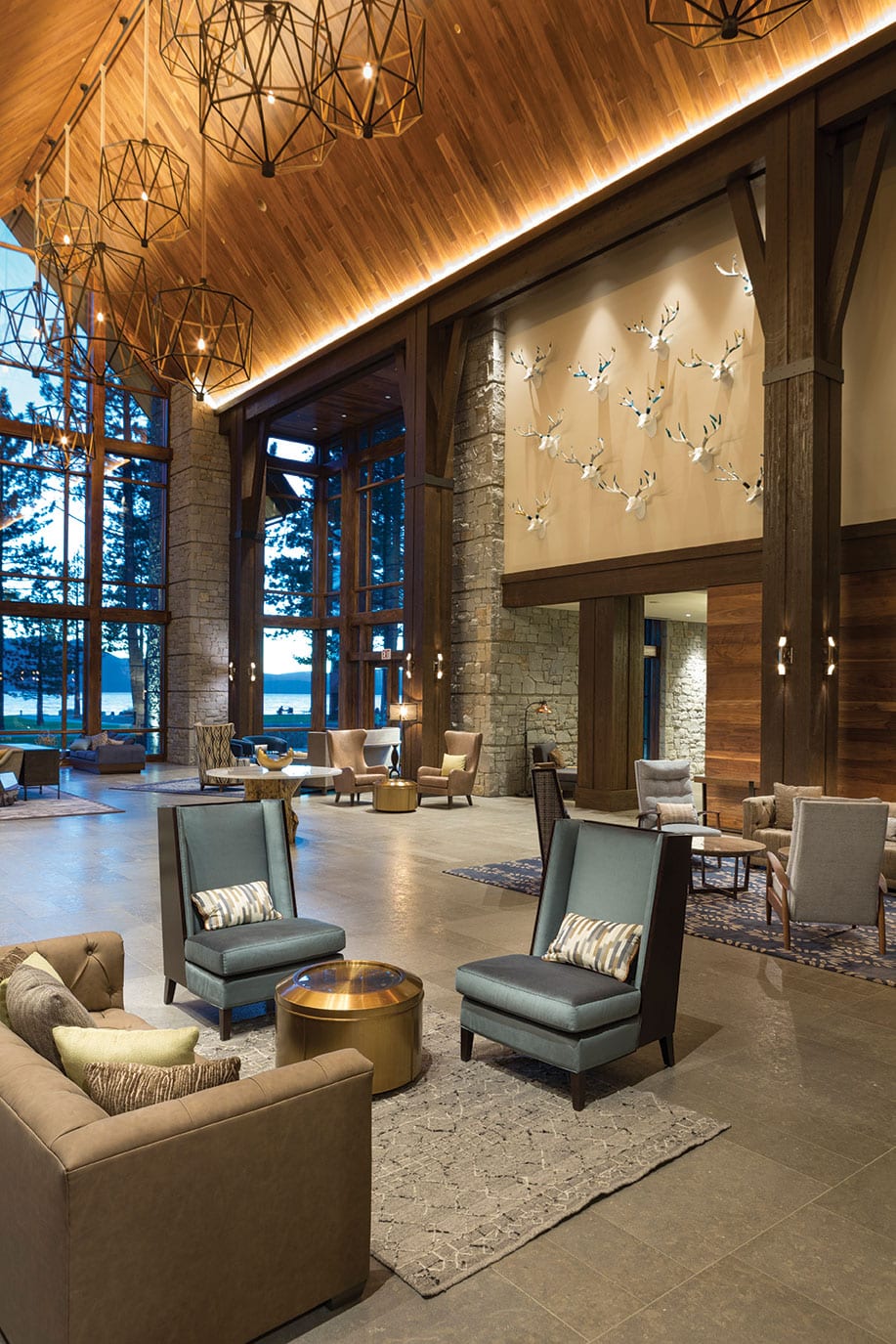 The main space, with its expansive lake views, was designed as a central gathering space for all the guests, photo by Noah Webb

At the Water’s Edge

For more than a century, the South Shore of Lake Tahoe has functioned as an enclave for the rich and famous, drawing celebrities from California and across the nation. Today, not much has changed. With the June 2017 opening of the Lodge at Edgewood Tahoe, celebrities again are flocking to Tahoe’s South Shore. The 154-room resort has hosted the likes of former President Bill Clinton, Run DMC and the star-studded cast of ABC’s Modern Family.

Set on the 235-acre property, which includes the Edgewood Tahoe golf course, the lodge was in the works for years. Robin Schiller, principal at Colorado’s CCY Architects, says that his firm was originally contacted by the Edgewood owners in the 1990s for a project that never came to fruition. However, in about 2005 or 2006, the owners contacted the firm again. Schiller says that his firm has experience with ski-oriented developments and, “our firm has historically worked with the local character of a town. We craft buildings that fit in really well while expressing themselves uniquely.” 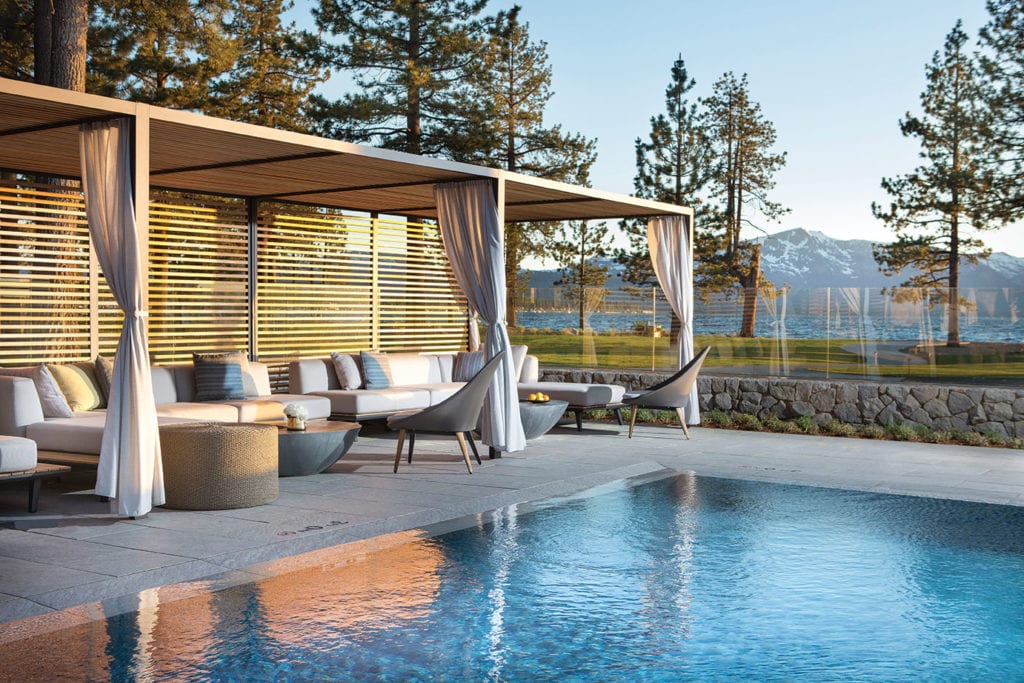 Over the next eight years, CCY and Edgewood explored various options for hotel and condominium units, until 2013, when Edgewood received Tahoe Regional Planning Agency go-ahead for the hotel project; Reno’s SMC Construction was chosen as the builder.

That same year, in fall of 2013, Hirsch Bedner Associates (HBA) was selected for interior design. “The early engagement of the interior design team is always a great help to the building process, as interior ramifications of building decisions can be fully thought through as first ideation,” says HBA associate Rich Kinnard.

Kinnard describes an “extremely collaborative” working experience. “The leadership of the Edgewood Companies, along with its shareholders, and the team from the brilliant architecture team from CCY, created a truly synergetic atmosphere for design.”

The resort takes its inspiration from America’s traditional great lodges, a fact that’s apparent in the wood-and-stone exterior, which uses heavy board-and-batten siding, a steep gabled, shingle roof and dormers to tuck the third story into the roofline.

Guests arrive at the two-story-high porte cochere to unload and valet their cars. Upon entering, a cozy lobby to the right greets new arrivals, the area delineated by a screen made of repurposed wood, while the reception desk is backed by a hard-carved relief of Lake Tahoe. 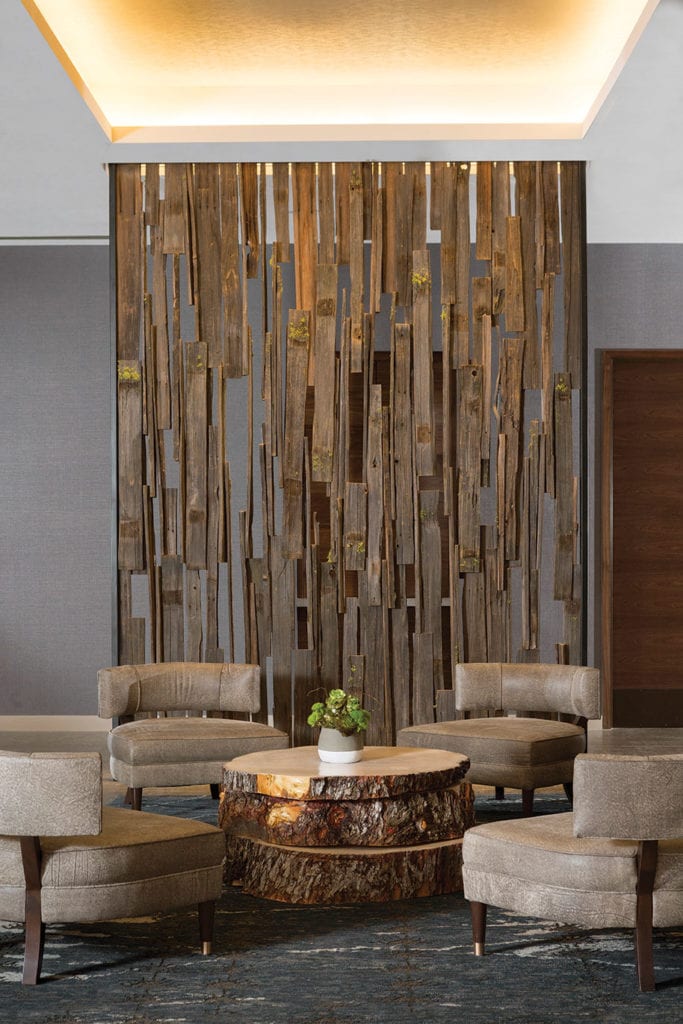 A rustic screen near the reception was made of a dock salvaged from the site, photo by Noah Webb

“The rustic wood screen at the seating area is a reference to the wood of the original dock that was salvaged from the site construction,” Kinnard says. “As this reception area is where guests are formally introduced to the lodge, it’s an important feature that proudly honors the history and legacy of what came before, and speaks to Edgewood’s longstanding respectful stewardship of this piece of the Lake Tahoe shore.”

Beyond the reception is the three-story-high great room, the highlight of which is the stellar view of Lake Tahoe and the mountains beyond through 38-foot-tall floor-to-ceiling windows. The room functions as a gathering space for all guests—essential to the American lodge design. “It’s the heart of the experience,” Schiller says.

Multiple seating areas dot the room, including one around the tall hearth created from locally sourced stone; others center around coffee tables, which are often set with games of chess or checkers. The room is a mix of contemporary elements, like the geometric overhead lights and modern white deer head sculptures, with more traditional Tahoe features, like the huge wooden beams and area rugs custom-designed to feature motifs used in the weaving and handicrafts of the Washoe tribe.

“The goal was to deliver on the expectations one might have of a grand mountain lodge, but in a way that is at once contemporary and timeless,” says HBA associate Brooke Copani. “We also focused on creating a welcoming sense of familiarity and casual sophistication through the eclectic array of furnishings, textures and patterns.” 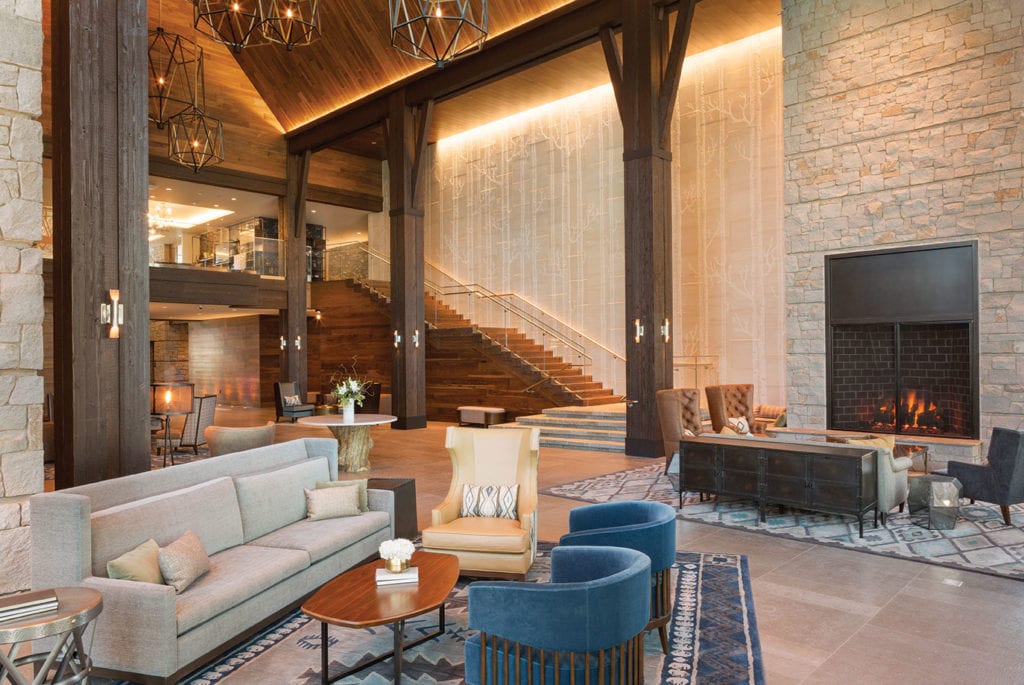 Leading to the second-floor library and guestrooms is a glass-railed staircase; the two-story-high Portuguese limestone wall backing the stairs was carved on-site by local stone artisans and is a nod to the area’s towering trees.

Throughout the lodge, the designers took care to bring touches of the outside in. In the adventure center, which sells basic necessities and rents a variety of toys like stand-up paddleboards and watercrafts, aspen tree trunks that were cut from the site are repurposed into a decorative element. A sliding door in the high-end boutique is outfitted with mosses. And a wall leading to Edgewood’s New American restaurant, the Bistro, is adorned with various live mushrooms.

The modern, airy, 200-seat Bistro offers indoor and outdoor dining and evokes a nautical feel, connecting the restaurant with the water just outside its doors. The roped ceiling, for example, was designed by Australian rope artist Dani Marti. The rope was manufactured in Spain, then sent to Australia where Martin wove the rope into panels. “All together,” Kinnard says, “the ceiling weights 1.8 tons.” 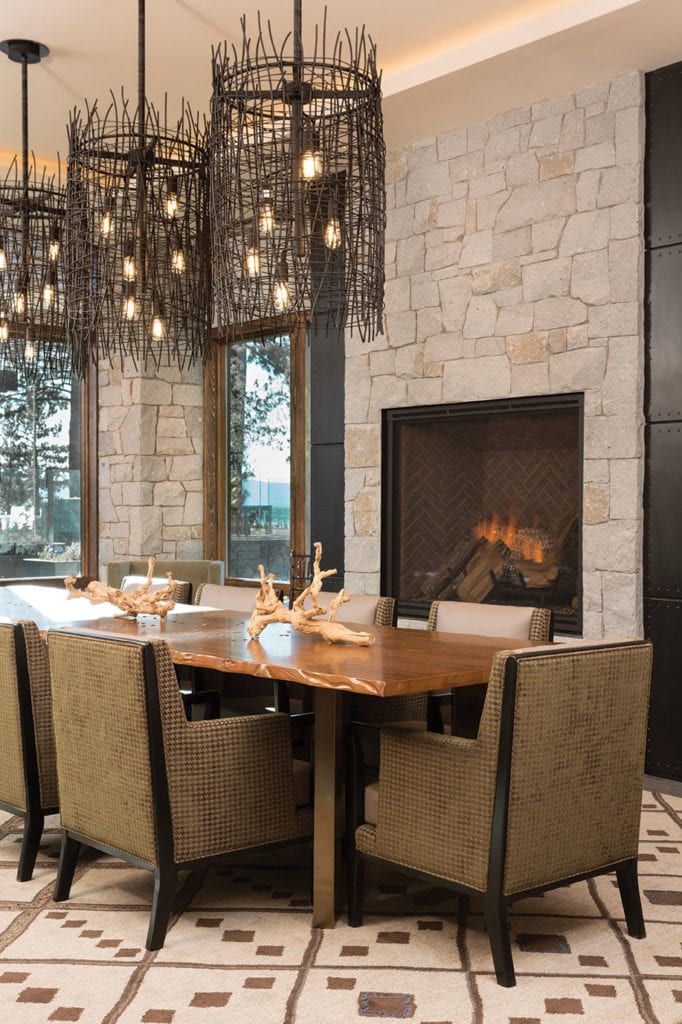 A private dining area in the Bistro features its own fireplace, photo by Noah Webb

A hallway leading to the first-floor coffee bar is customized with built-in seating areas, roped stools and a double-sided fireplace set in hot-rolled steel; the other side warms guests waiting for the elevators. The coffee bar serves Seattle’s Caffe Vita beverages and utilizes teal tiles, the cooler tones mixing with lighter woods and industrial-style lighting. Large beams and locally quarried stone columns pair with artful glass chandeliers that resemble ice crystals in the ballrooms, serving as a reminder of the mountain surroundings.

“We wanted to design a contemporary lodge experience that is luxurious and uniquely Tahoe, while paying respect both to the heritage of the site and the legacy of Edgewood’s history,” says Kinnard. 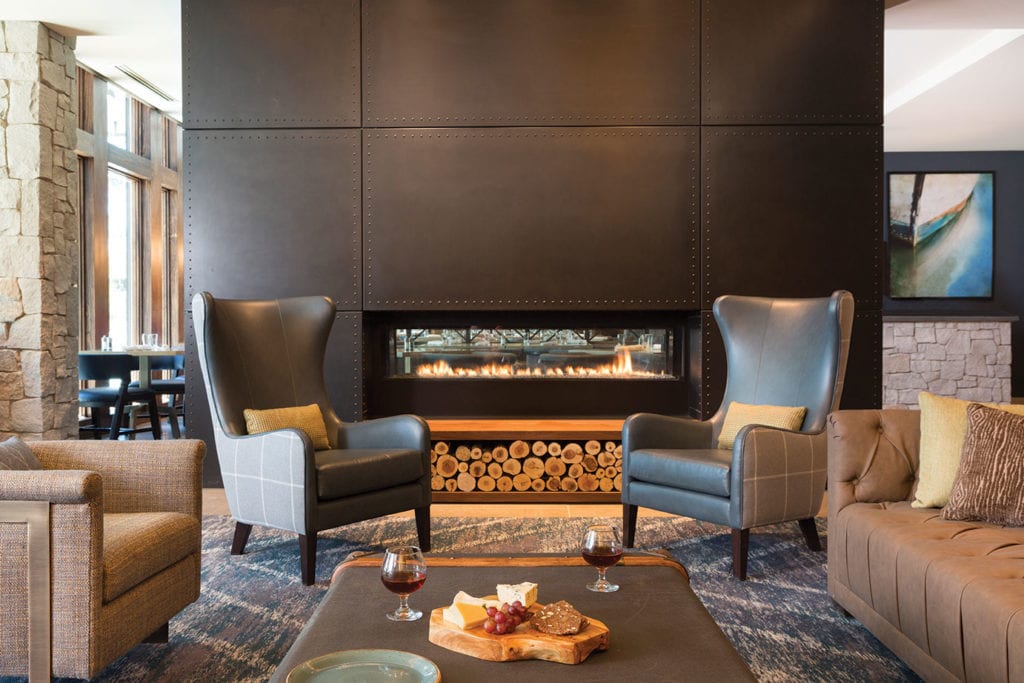 A black metal fireplace serves as a delineation between the bar and the Bistro, photo by Noah Webb

Meticulous touches decorate the interior. For example, the guestroom doors each feature one of six different shades of blue reminiscent of The Lake. The corridors were left intentionally free from decoration as shades over the ceiling lights cast shadow patterns on the walls meant to reflect the filtered light of nature when walking in a forest canopy. A history wall near the entry depicts pictures and antiques—like a tea cup and a golf club—from the Edgewood area’s past, dating to Friday’s Station, which was an old Pony Express stop in the 1860s.

The guestrooms are rustic yet luxurious, with a wooded “mudroom” in the entry and gas fireplaces in each room. A kids’ camp has a treehouse-inspired interior, and is open for parents to drop off children or stay and play. Outdoors, an infinity swimming pool is heated year-round and surrounded by cabana seating and multiple fire pits. 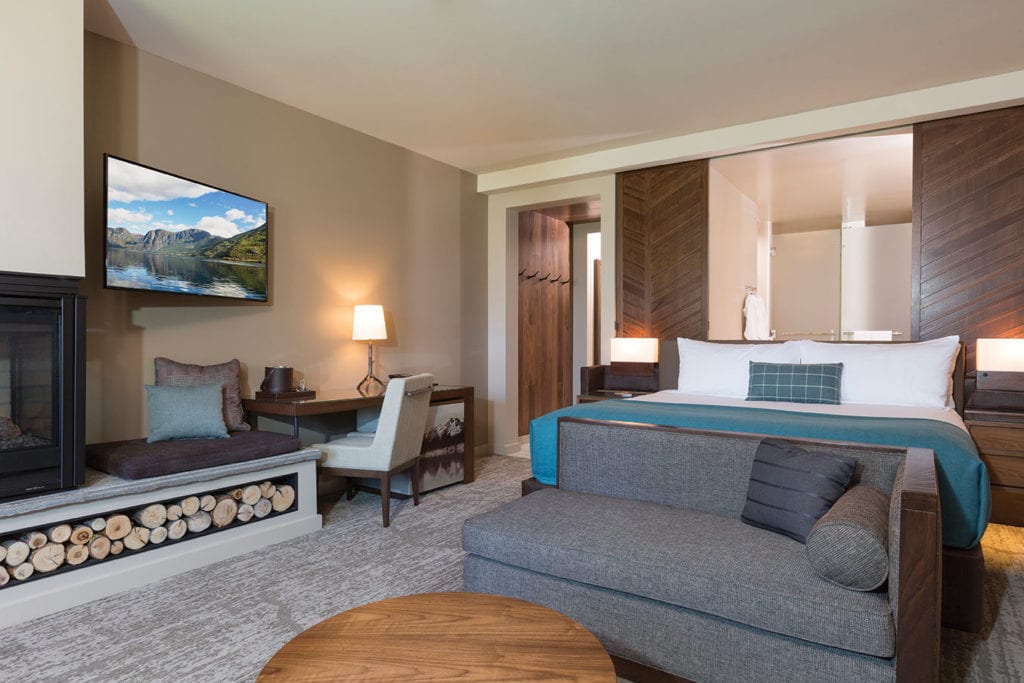 Guest rooms include fireplaces and an entry mudroom, photo by Noah Webb

Construction on the hotel began in late 2015 by Reno’s SMC Construction. Several of the golf course holes were relocated to accommodate the building, which opened officially in June 2017 at a cost of $100 million. The team followed strict green building guidelines, earning the project a LEED-silver certification.

“I want to compliment the Edgewood folks and the Park family on the vision to achieve a project like this,” Schiller says.

Indeed, the Lodge at Edgewood was a monumental undertaking, but one that succeeded in every way, creating an idyllic lakeside retreat. Unlike most of South Shore’s large resorts, Edgewood is a gaming-free establishment. Instead, the resort focuses on creating opportunities for families and friends to gather and play, either at the thoughtfully designed spaces indoors, the multiple options for recreation outdoors, or simply at the sand on the beach just steps from the hotel.

It’s a strategy that resonates with its guests—both celebrities and those who simply want to escape and enjoy the beauty of Lake Tahoe from the water’s edge.