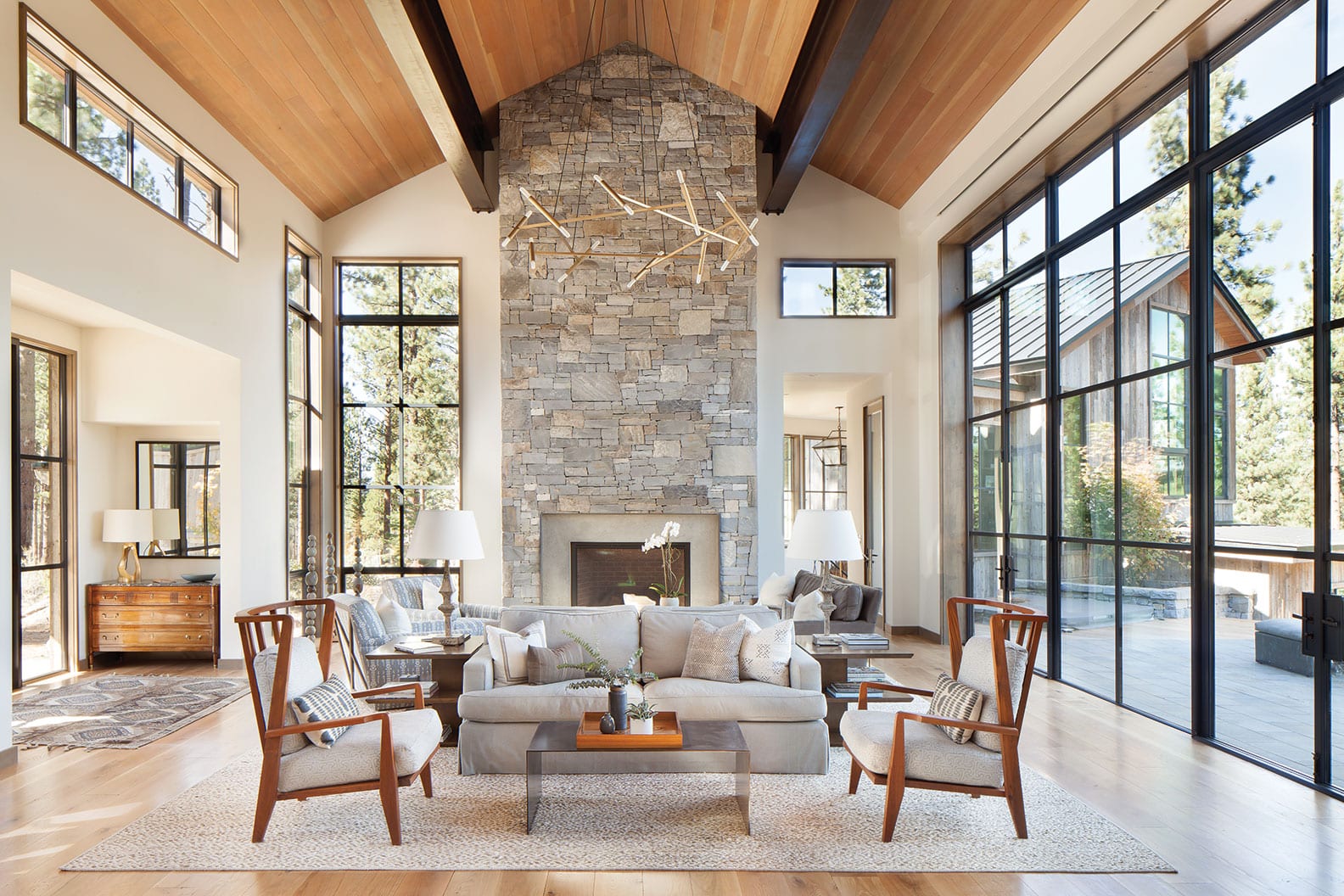 The main form is a room defined by walls of glass, multiple seating areas, a tall fireplace and 49-foot-long steel beams in the ceiling, photo by Gibeon Photography

In architecture, creating a sense of simplicity isn’t exactly easy. It’s a matter of restraint, of simultaneously showcasing yet streamlining the design. Such was the case for one Martis Camp home. The Bay Area–based homeowners approached architect Clare Walton of Walton Architecture + Engineering with the idea of putting a modern spin on a traditional farmhouse.

“The challenge is to be simple with the use of forms,” says Walton, whose firm is based in Tahoe City. “You have bigger, longer expressions of space that are less broken up.”

The home is composed of three main rectangular barn-shaped forms—each clad in 80- to 100-year-old reclaimed barn wood and topped with traditional gabled roofs—that are connected based on the project’s views and topography. Walton had to work around several no-build zones; one on the front of the home, to preserve an area of lichens and moss, and a second in the back, where the land drops steeply. 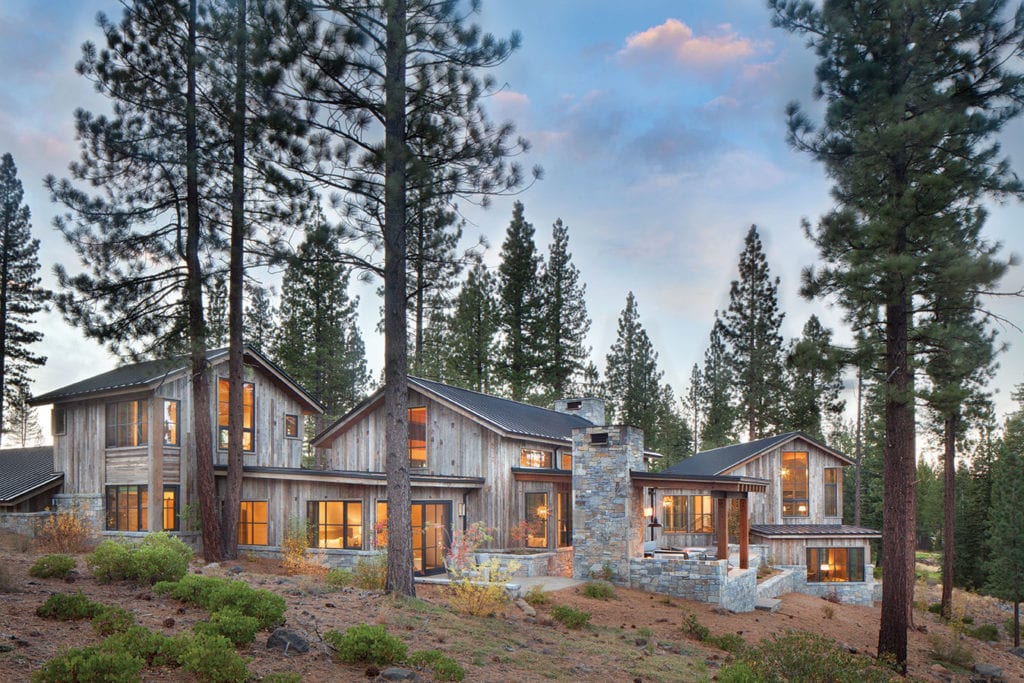 The main form is a single room comprising the living area and kitchen. Guests enter through a 10-foot-high glass-and-steel pivot door into the bright, airy, massive space.

“The great room is probably the grandest space in the house,” Eben Schrieber, project manager with Jim Morrison Construction, says. Steel-framed windows and doors allowed the team to create entire walls that are mostly glass, while enormous 49-foot-long steel beams run the length of the room. The beams were a challenge, says Schrieber, but “the size of the steel makes it a very dramatic feature.”

It wasn’t the only challenge in creating a space that appears simple.

“The size of that room is so epic,” says Matt O’Dorisio, a Los Angeles–based interior designer. “One of the hardest things to do was to convince the clients that we needed quite a bit of furniture to create smaller areas—the room is so massive we had to bring it down. That was a hard thing to figure out, but once we got everyone on board, the house got more intimate and easier to handle.”

Using back-to-back sofas, O’Dorisio created several more intimate seating areas—one with the two-story-high stacked stone fireplace as a focal point, the other facing toward the kitchen—to make the scale more manageable. To achieve the farmhouse look, he mixed reclaimed woods and rough surfaces with luxurious fabrics and textures. “It’s that juxtaposition between rawness and roughness with really clean lines,” he says, adding that it was “the biggest challenge, but the biggest payoff.”

Walton and the team took inspiration from Axel Vervoordt, a Belgian designer whose works are both timeless and restrained, in the architecture and interior. Vervoordt’s influence can be seen in the open kitchen, where the range hood is tucked into a soffit to streamline clutter. “Hiding the hood came from a kitchen that Axel Vervoordt had done,” O’Dorisio says. “I thought it looked so interesting. It creates a really clean palette.” 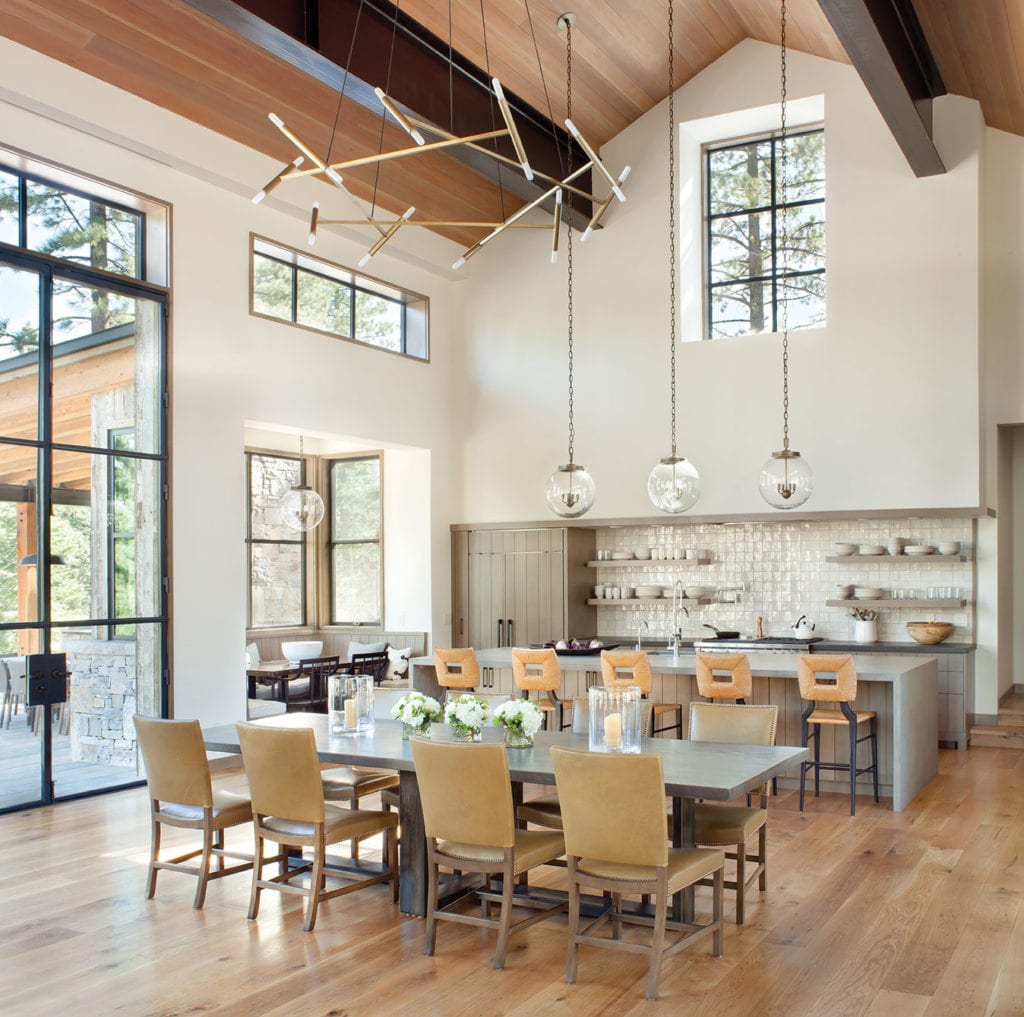 The kitchen range’s hood is concealed in a soffit; open shelving also contributes to a streamlined effect, photo by Gibeon Photography

The refrigerator—concealed behind wood paneling to resemble cabinetry—is another example of this deceptive simplicity, as is the dishware displayed on open shelving.

“Most kitchens have upper cabinets,” says Schrieber. “This one was all open.”

The team was originally going to add supports to the shelves, but decided they liked the unassuming appearance of the straight lines. “It feels like everything is tucked away, even when the dishes and glasses are the shelves,” says O’Dorisio. “We took the time to find plates and dishes that were pretty to look at when stacked.” 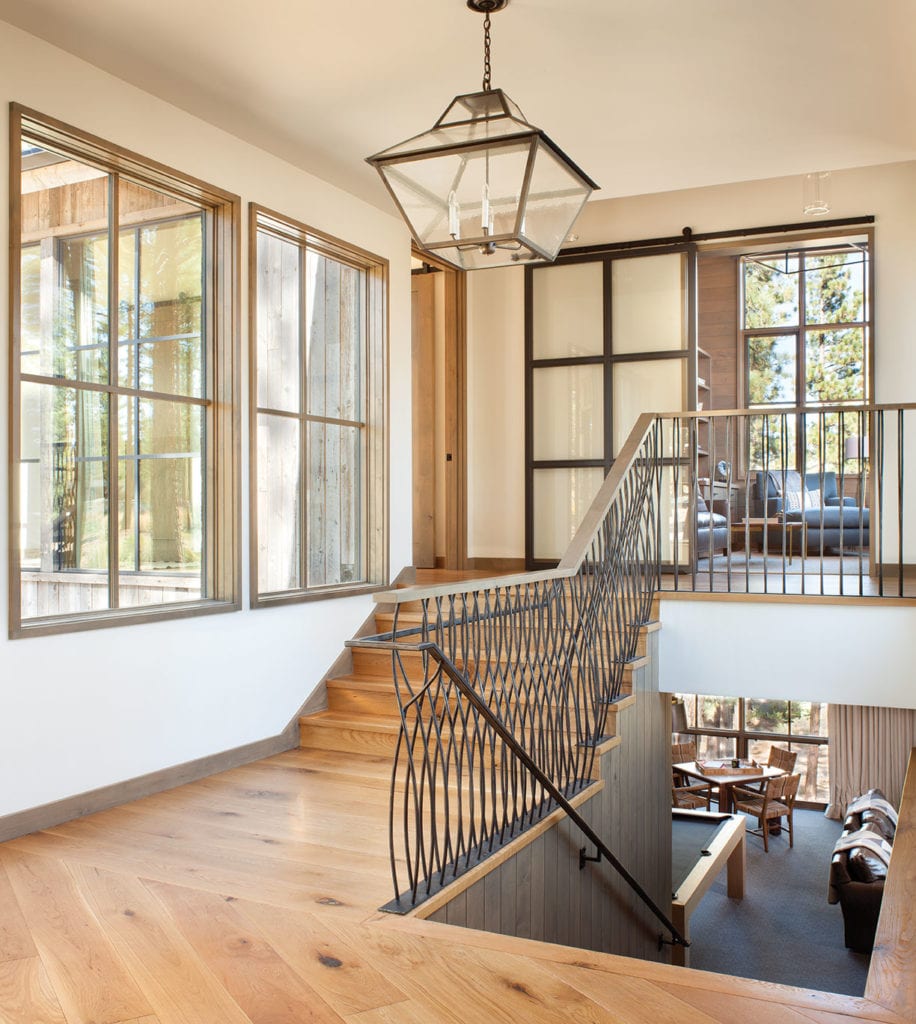 A split stairway leads down to the game/media room and up to the master wing, photo by Gibeon Photography

The second of the home’s three barn-like forms is a two-story structure set into the steep, downsloping hillside. It connects via a link that includes a powder room, decorated in a Trove wallpaper that evokes trees in a mist, and a home gym. A stairway splits up to the floor-to-ceiling, window-lined hallway of the master wing. At one end, an office/library is set off behind a sliding steel-and-glass door; built-in cabinetry and wood wall paneling creates a cozy space, while a heavy application of windows, both to the outdoors and a high interior window to the next-door bathroom, keeps the room airy.

At the other end of the hall is the luxurious master suite, where the crisp design utilizes neutral whites and grays. “There’s a real restraint with the design,” says Walton, noting that the home has a consistent vocabulary throughout in the use of colors and materials.

“[The owner] didn’t want a lot of color, but she did want interest and warmth,” says O’Dorisio. He said his goal was to create a balance between light and airy while also keeping it mountain appropriate—“a ski chalet feel that would also translate to the warmer summer months.”

High ceilings in the master bedroom add to the sense of grandeur without becoming stuffy; the four-poster canopy bed matches the geometric lines of the light fixtures above. Wallpaper and a large area rug add texture, while a simple sofa set against the bed faces the windows, keeping the focus on the stunning treed setting outdoors. 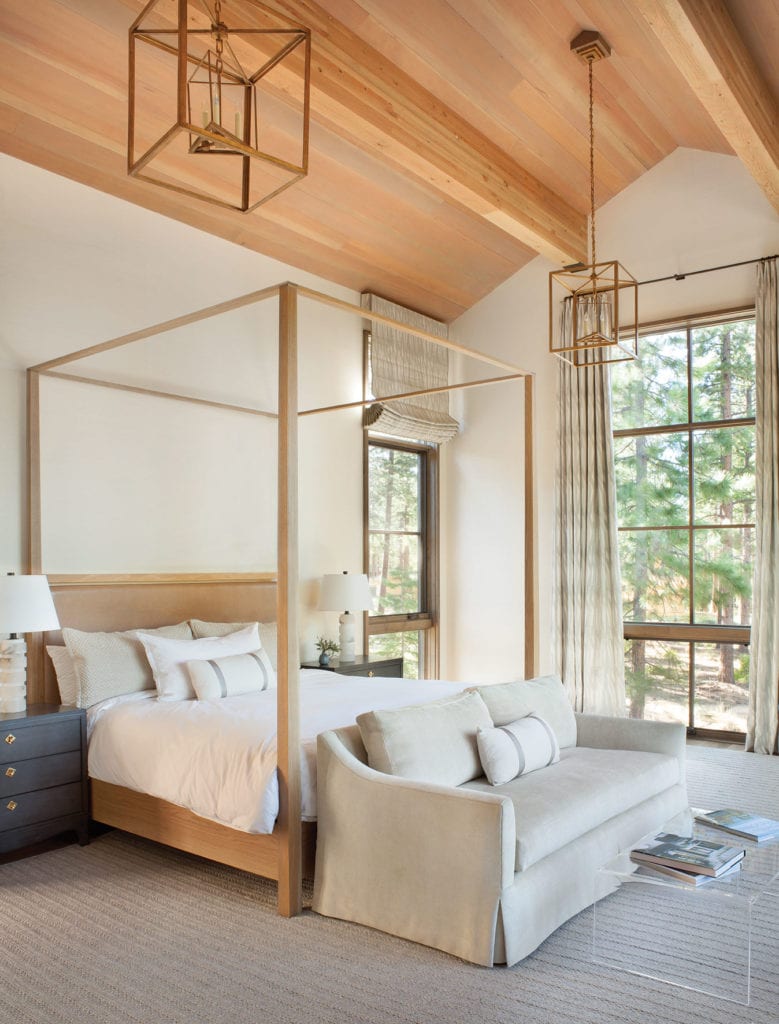 Tall windows in the bedrooms, including the master, keep the focus on the exterior scenery, photo by Gibeon Photography

The lower story is set into the sloped hillside. A gracious staircase leads into the media and game room, where Lutron shades and comfy couch and chairs in one corner—plus the nearby beverage station with beer fridge—create the perfect space for movie nights; the billiards table, overhung with drum pendant fixtures by Urban Electric, and game table are great for when the weather keeps the owners and their friends indoors.

“Everyone wanted wood floors on the downstairs, but I really pushed for the wall-to-wall carpet,” O’Dorisio says. “It’s so warm. That was one thing I got to win on.”

The downstairs includes two bunk rooms—one with four queen-sized bunk beds, the other with four full-sized bunks. Here, as throughout the home, the windows start at the floor and align across the room, giving a sense of symmetry that also makes the space feel larger. Mesh lockers double as clothes storage. In the associated bathrooms, integral concrete trough sinks play into the farmhouse theme. The owners, Walton says, like to use the home for getaways with their friends, so the bunk rooms are as much for adults as for children. 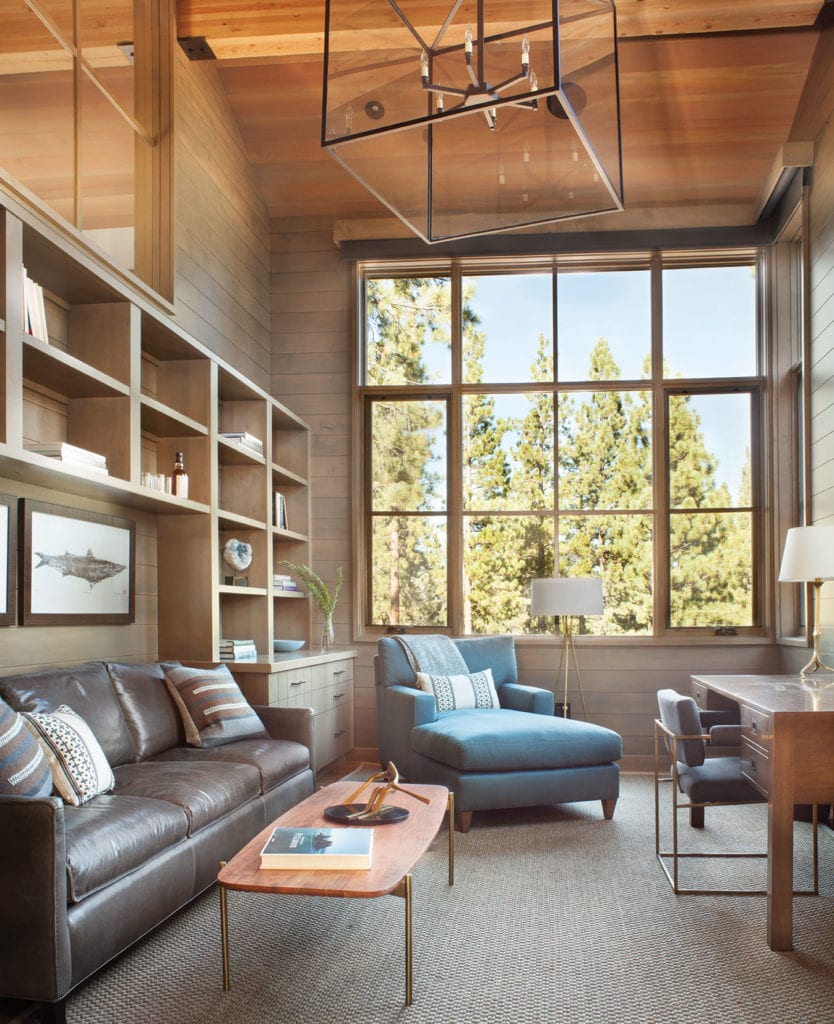 Wall paneling in the office combines with large windows to keep the space intimate but airy, photo by Gibeon Photography

The third form, located on the other side of the main living space, steps up from the kitchen and includes a guest master suite that tucks into the grade, a mudroom topped with clerestory window, laundry area and a getaway suite, also bright and airy and decorated with touches like a cowhide pillow and a wood light fixture that resembles starfish.

Construction on the almost 6,000-square-foot home began in May 2014 and finished just over a year later in July 2015. “For the quality and size, it moved pretty quickly,” Walton says.

Shrieber credits the home’s success to communication and teamwork during both the design and construction phases. “It truly is a team effort,” he says. Beyond working directly with Walton and O’Dorisio, there were another 400 people involved in “everything from the concrete to framing to the finishes, the tile and the countertops,” Shrieber adds. “It’s a pleasure to work with them.”

The design—restrained yet genuine—fully accomplishes its goal of creating a modern farmhouse in the mountains. “It feels so peaceful,” Walton says. “It’s really bright and clear and uncluttered.”