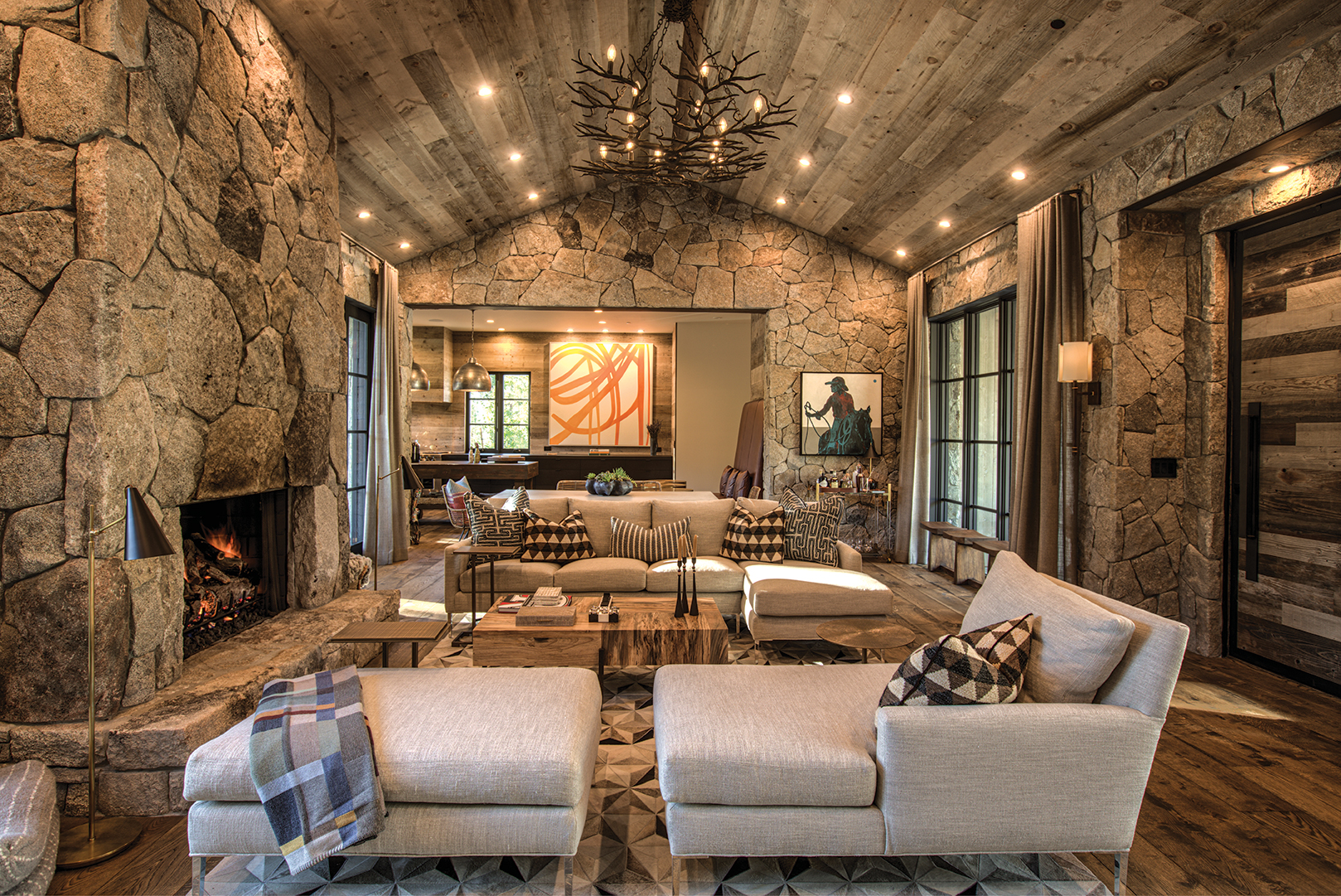 The home was designed to feel like an old stone cottage, with granite-clad walls and reclaimed wood stretching across the ceiling

From Fairytale to Family Treasure 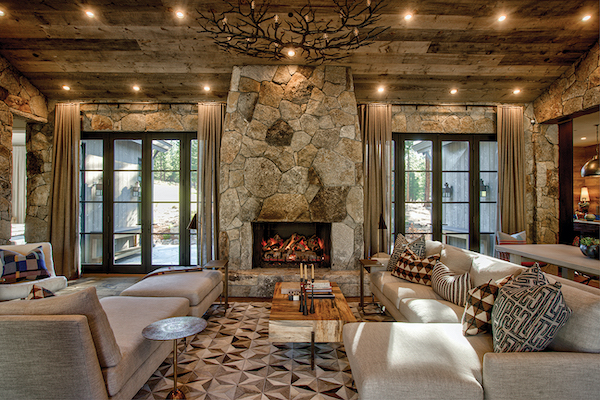 A large ‘Old Tahoe’ fireplace in the great room, installed by Diaz Masonry, is flanked by glass on two sides

Once upon a time, on the eastern slope of the Sierra Nevada, just beyond Lake Tahoe’s shores, there was a tiny cottage in the woods.

A survey crew laying the groundwork for what would become Clear Creek Tahoe stumbled upon the single-room structure, made of native stone and standing for 100 years and counting. Instead of removing the cottage, a project team celebrated its existence, with builders adding square footage beyond the four walls. The cottage became the core of the home, one that now serves as an intimate setting for a family’s happily ever after.

This fairytale, while not technically true, provided the foundation for the fate of the first cottage lot sold in Clear Creek Tahoe, a burgeoning private golf course community nestled between Tahoe and Carson City.

“[The story] came from when we were meeting with the architect,” recalls Jim Smith of Serving the Nation, who led the interior design along with Donna Vallone of Vallone Design, both based in Arizona. Smith was the mind behind the fairytale. “I was thinking, what if the centerpiece was an old stone cottage? It wasn’t set up that way; it was all going to be a wood structure. I thought, look at these beautiful trees that are here. You could be walking through the forest and come across an old stone cottage here. It’s so real, the feeling of it. Once I came up with that, it was so easy to take it forward.” 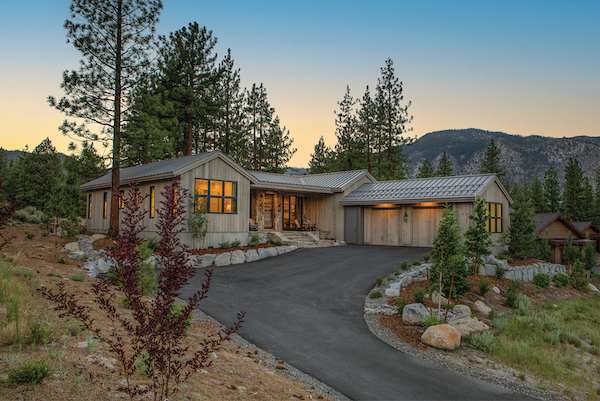 The home is located on the first cottage lot sold in Clear Creek Tahoe, which features views of the golf course and surrounding mountains and close proximity to the community’s Summit Camp amenities

Initially purchased as an investment property, the owners decided early on they’d rather keep the cottage as a forever family home for themselves and their three teenage children.

“You get so many feelings and emotions and you put so much effort into a final product, and you become attached,” says the owner.

The couple sought to keep the design simple throughout their 2,596-square-foot vacation home. The floor plan, drawn up by Truckee-based architect Brandon Mitchell, is shaped like the letter H, the bedrooms and bathrooms kept modest in size and shooting off from the larger common area.

The details evoke an organic and artisanal approach. Locally quarried granite covers the walls in the center of the home, a living area anchored by a large open-air stone fireplace—“one of those traditional fireplaces like you see on Lake Tahoe in the early 1900s at Vikingsholm in Emerald Bay or at Thunderbird Lodge,” says Mark Tanner, president of Mark Tanner Construction, whose team built the cottage.

Branching out from the extensive stonework, the bedrooms, kitchen, mudroom and garage are clad in reclaimed Trestlewood siding that complements the gray and brown hues of the granite. 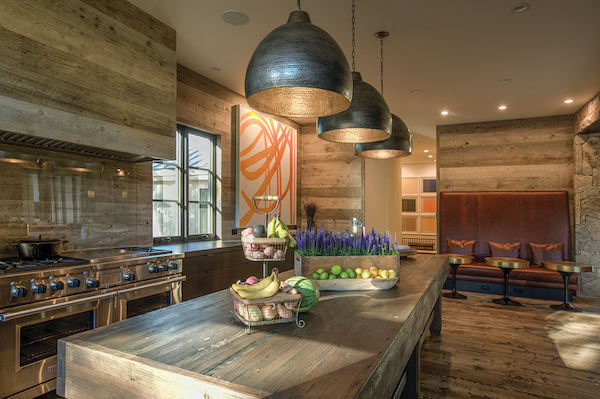 The kitchen incorporates modern elements, such as a banquette with round cocktail tables and leather-backed seats, as well as an oversized contemporary art piece

“The colors were selected for a warm feeling, where not every square inch of the house is white,” says Robbie Jamison, project manager with Mark Tanner Construction. “We have darker cabinets, we have natural stone, we have organic material on the ceiling. You have five different styles of wood in this house, all tying together.”

While the structure itself provides an organic aura, the interior spaces are filled with more modern touches.

The kitchen area, for example, houses a banquette with 80-inch-high leather-backed seats and three round cocktail tables—a “hip and groovy” bar area, as the owners see it. A wine fridge and Sub-Zero freezer and refrigerator are tucked out of sight behind custom floor-to-ceiling cabinetry. A dramatic, oversized contemporary art piece adorns the wall.

The kitchen’s centerpiece, a 6-inch-thick, 12-foot-long butcher block table made from seasoned timbers, was painstakingly carried through the front door.

“I think it took six people to carry it in because it was the size of a tree,” says Tanner, whose team built the piece in their Truckee shop. 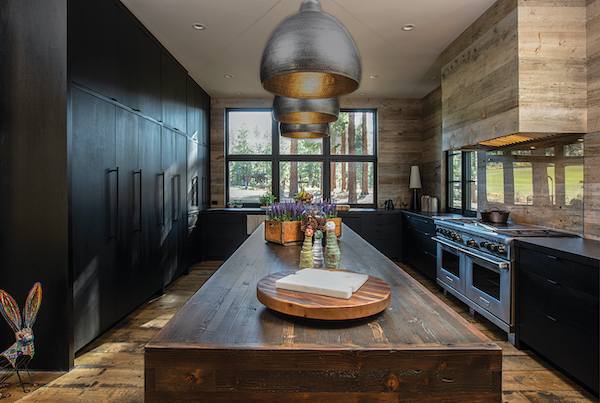 The kitchen features a 12-foot-long butcher block table made by Mark Tanner Construction, while a Sub-Zero refrigerator and freezer are concealed behind custom floor-to-ceiling cabinetry

Large windows throughout, framed in an aluminum-clad product that resembles steel, add another modern flair while providing views to the golf course and Carson Range.

There’s a science to the presentation of such a home. Before the owners arrived for the final unveiling, Smith provided specific instructions sent via email for an unguided tour that took the couple from the doorstep through the home, including annotated points of interest. He and Vallone had spent two weeks prepping the cottage for the move-in, overseeing the delivery of furniture, hanging curtains, ironing linens and more. The couple was on a photography blackout; they had no idea what the final product would look like. By the time they arrived, Smith and Vallone were gone and the exterior gas lanterns were lit to welcome the pair to their new home.

“Take a minute and enjoy the magical lighting glow of the dome [light fixtures] over the masterpiece butcher block,” Smith wrote about the view of the kitchen through the window to the right of the front door. And, “Yes, that’s the fireplace you always envisioned (times 10) … Don’t forget to look up [at the metal tree branch-style chandelier], such an understated showstopper!” 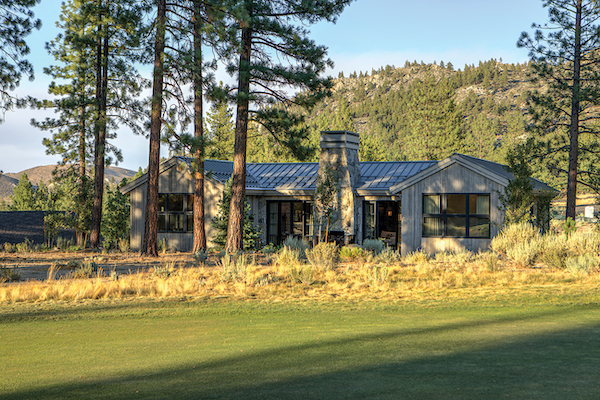 Smith had even left a bucket of champagne for them to celebrate. And they did, over a bottle of Veuve Clicquot, as they explored the cottage where every detail was considered and hand-selected with care.

“We wanted a simple structure that was really tasteful,” says the owner. “We didn’t want to reinvent the architectural wheel in Lake Tahoe; that was not our goal. It was to build something to stand the test of time that would be tasteful today and tasteful 100 years from now.”

It was a perfect start for the family’s happily ever after.