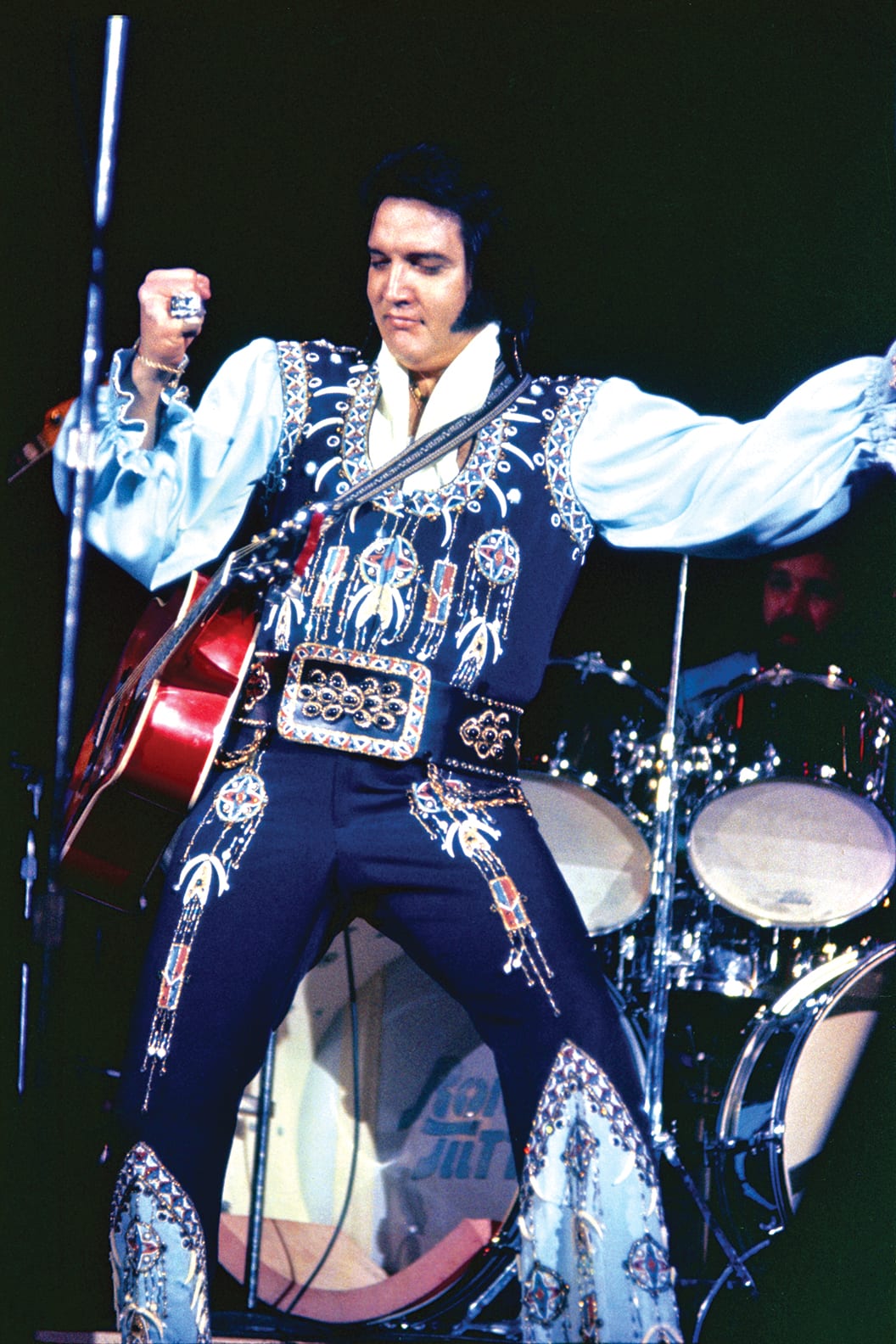 Elvis Presley performs in Spokane, Washington, in April 1976. The following month, he performed in the same outfit at the Sahara Tahoe, photo by Judy Palmer

Memories of the King at Lake Tahoe

“A live concert to me is exciting because of all the electricity that is generated in the crowd and on stage. It’s my favorite part of the business, live concerts.” -Elvis Presley

I can still recall the image with Technicolor clarity. In May of 1976, our family station wagon approached the Nevada border for another weekend getaway on the South Shore of Lake Tahoe. Emblazoned on the Sahara Tahoe marque in front of us were the five letters that would make this particular outing unlike any other:

Not only was Elvis Presley appearing, we were going to see him! In my active 10-year-old mind, this was the watershed event that would cement Lake Tahoe as the coolest destination on earth. Sure, there had been snow caves, mountain hikes and glass-bottomed paddlewheel steamboats, but this was different. This was unique. This was Elvis.

To prepare for this special event, I listened to more than a few of my mom’s dusty records that were stashed away in the family entertainment center, and even subjected myself to one or two of her favorite Elvis Presley films of the 1960s.

We arrived Friday afternoon, but Saturday evening was when the big event would unfold. That didn’t stop my dad, my 14-year-old brother Mike and me from pursuing what had become our Saturday morning Tahoe tradition: trout fishing from the Cave Rock parking lot on the East Shore. Even though I was never a morning person, breakfast at Bob’s Big Boy along Pioneer Trail was usually enough enticement to get me upright before dawn.

As usual, Dad caught his limit of identically sized rainbow trout in about an hour, so we headed back to our cabin near Stateline. The cabin was a tiny two-bedroom, one-bath A-frame with about a quarter-acre of vacant land nearby, but the rugged mountain setting and wildlife made it seem like a paradise to me. I usually needed a nap to recover from these early morning fishing jaunts, but not on this day. There was too much excitement in the air—too much anticipation.

We made a brief excursion to Raley’s around noon, where we ran into Elvis’ stage manager and right-hand man, Charlie Hodge, perusing one of the aisles. I thought he looked vaguely familiar from one of those old Elvis films, so my sister and I alerted the rest of the family to his presence. Hodge seemed like a genuine good guy who was surprised and flattered that we recognized him. When Dad asked him how Elvis was doing, he replied, “Good,” as if to avoid this sensitive topic through his brevity.

Hodge and Elvis had served in the army together, shipping off from Fort Hood, Texas, to Friedberg, Germany, in late 1958. Around that same time, the route to Lake Tahoe was being transformed by the massive widening of U.S. Highway 50, necessary to accommodate the 1960 Squaw Valley Olympics.

Elvis and Tahoe were each beginning to lose a bit of innocent charm by that time. Five years earlier, both had been nearly perfect products of nature, combining attributes in ways never found elsewhere. Only overexposure, greed and chemicals could possibly ruin these sublime creations. Sometimes I wonder if remaining undiscovered by the masses would have provided a better outcome for both.

Eventually, the two legends found each other, with Elvis first appearing at the Sahara Tahoe in 1971 and returning for two engagements prior to the Mother’s Day weekend shows of 1976. He was said to have enjoyed the intimacy of the Sahara’s High Sierra Theatre. Or maybe this was just a way to inhale some fresh mountain air before exhaling in the hot Las Vegas desert once again.

On the night of the show, we entered the Sahara lobby as a backdrop of ringing bells and clinking coins lined our path to the theatre entrance. These sounds, I thought, could only mean someone was winning.

I was surprised as my parents bypassed the meandering line that spilled onto the casino floor and headed straight for the VIP entrance. Surely, we would be turned away. As if out of a movie, the maître d’ asked Dad matter-of-factly, “Who do you know?” Without hesitation, Dad rattled off two or three names that seemed to satisfy the gentleman, and we were promptly ushered to the best seats in the house: center front row.

The elderly woman next to us sported a purse shaped like a golden elephant. I remember thinking you had to be very rich to pull this look off, especially the elephant part. She probably wondered what this family in their polyester leisure suits were doing in the front row. I wondered, too.

After dinner was consumed and the forgettable opening comedian did his thing, the time had finally arrived, as the orchestral rendition of the 2001, A Space Odyssey theme signified. The house lights dimmed as the crowd fixed their attention toward the stage.

When Elvis finally made his grand appearance, I remember being shocked and disappointed immediately. He looked bloated and overweight and his eyes seemed glazed and tired, like he had just woken up. An audible gasp arose from the audience, who must have been thinking the same thing. Surely this was not the handsome dude on those records, or even the campy B-movie star.

To make matters worse, about a dozen young girls suddenly appeared in unison out of nowhere, screaming uncontrollably and rushing the stage. Even a 10-year-old could tell this was a setup. Had this been arranged to convince us that Elvis was still Elvis? The King tried to settle in during his opening number, C.C. Rider, but I thought he looked a bit embarrassed, and rightfully so. He was a parody of himself.

Then something incredible happened. As if determined to prove he still had it in him, Elvis just sang. No matter the state of his mind or body, he could still belt out a number with depth and character, and he suddenly seemed intent on proving it. I can only recall a couple of the tunes, including You Gave Me a Mountain and American Trilogy, but it didn’t take long to go from disappointment to awe-inspired by his raw talent. Elvis had saved the day. Perhaps the movie star looks were like the Heavenly Valley tram ride we enjoyed the previous summer: They could help you find the majesty, but it would always be there, with or without the accoutrements.

When all the trout had been barbecued and the long weekend trip came an end, I clearly remember playing in the street next to the vacant lot, equipped only with my toy cars and imagination, as my parents loaded the wagon. I built a model of our cabin out of pine bark at one end of a small patch of sand, then a model of our Bay Area home at the other end. I was careful to place the model cabin adjacent to a large puddle that would play the part of Tahoe.

As my little red car passed the slow-moving ants on my westbound dirt highway, I remember a feeling of sadness prevailing. Sure, there would be many future excursions to this magical place, but there would never again be a day so perfect.

There also would be no return engagement for Elvis. Just over a year later, the King was gone. While the protectors of The Lake may have slowed down the influx of development, traffic and pollution that threatened its pristine beauty, the protectors of Elvis in his close-knit circle of confidants were less successful.

As Charlie Hodge said after the death of his dear friend, “Anyone who ever came in contact with Elvis found that they were just a little bit better off for it.” Elvis had truly earned this praise that long-ago spring weekend, ensuring that the luster of Lake Tahoe remained untainted for one 10-year-old California boy.

Daniel Sims is a quality engineer and part-time writer based in Southern California.