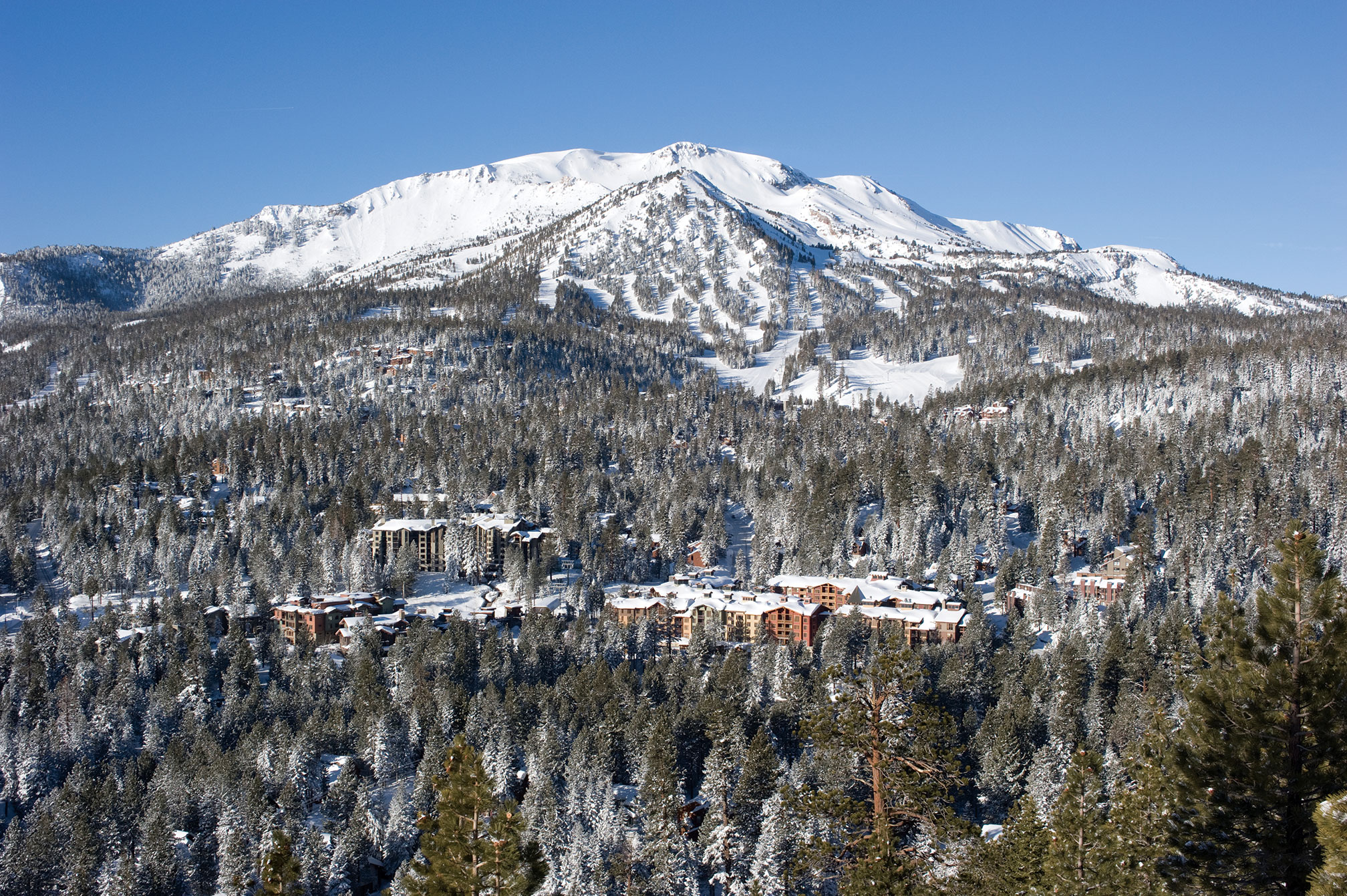 Mammoth Mountain and the Village Lodge, photo by Peter Morning

Mammoth. The word conjures forth and sums up so very well all that is the sprawling 3,500-acre ski resort perched on a lava dome complex in Inyo National Forest, which tops out at 11,053 feet, lands an average of 400 inches of snow and enjoys 300 sunny days annually. It boasts 150 trails, 28 lifts and 3,100 vertical feet, and a season that typically runs from November through June, sometimes longer (this past year it was July 4th). Any way you add it up, that’s big.

What isn’t so big is the distance from here to there. A three-hour vista-filled drive down Highway 395 from the Tahoe area means we are actually a couple hours closer than Mammoth Mountain’s biggest user base, who commute five hours from Los Angeles (though there are flights between the two, in season).

Dave McCoy, a scrappy Southern California ski champ who founded Mammoth Mountain with a single ski lift (Chair 1) in 1955, sold the business to Starwood Capital Group in 2005 and retired after running the resort for 68 years (the man is still going strong at 101 years old). Always known for its fun and funky ways, the resort and its lifeline town, Mammoth Lakes, have grown up a bit over the past decade. If it’s been awhile since your last visit, here are a few reasons why it’s worth another run. 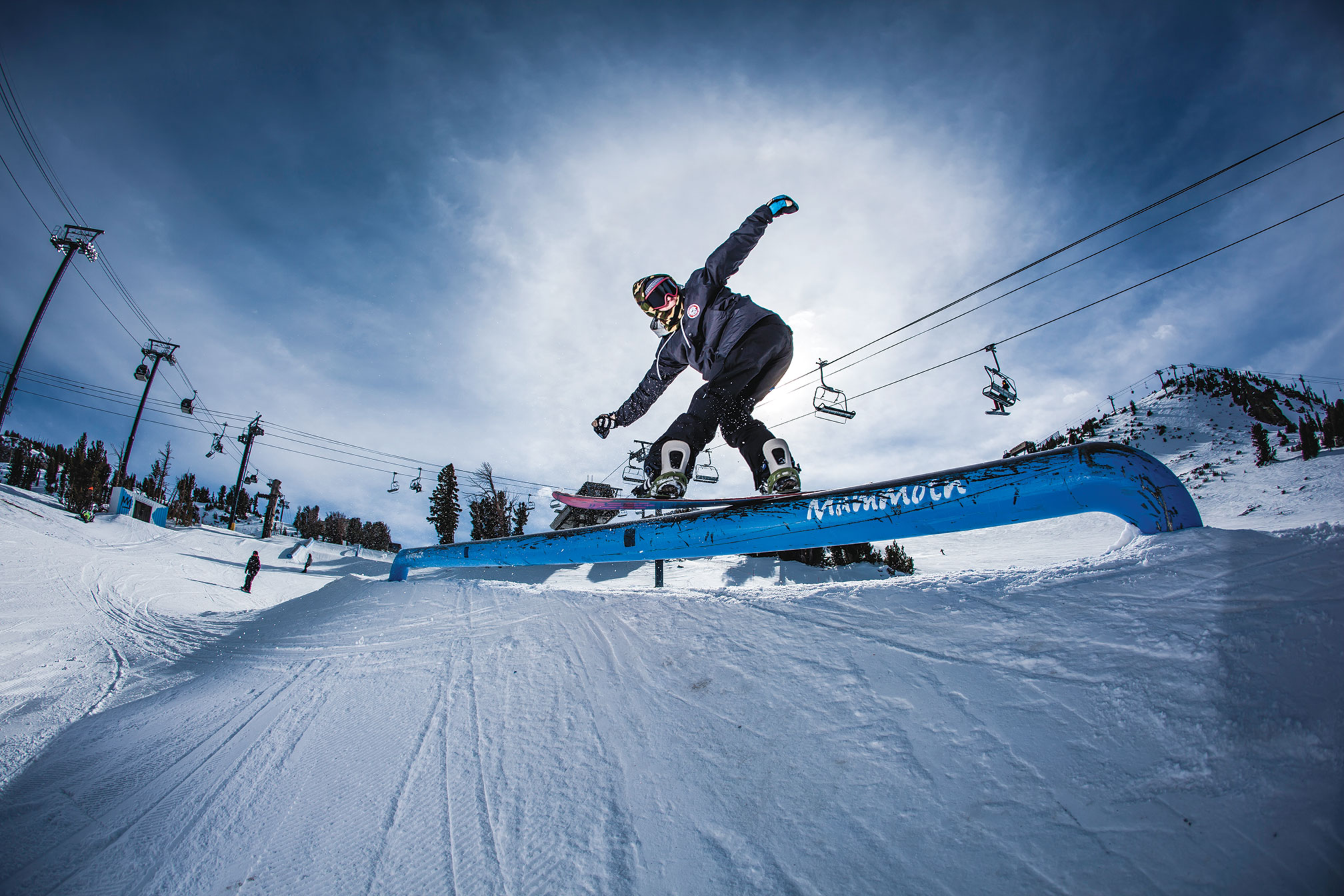 The Village, the European-style pedestrian-friendly base area that opened in 2003, could easily be confused with that of Northstar or Squaw since it, too, was built by Intrawest. From one of the Village Lodge’s condos, it’s a short walk to dining, shopping and the 15-passenger gondola that whisks riders to Canyon Lodge base with an on-the-snow return via Ski Back run. It’s also the hub of the shuttle system. Juniper Springs Lodge at the base of Eagle Express also offers convenient condominium lodging.

The Mammoth Mountain Inn across from the Main Lodge continues to offer beds in its original A-frame slopeside hotel. For Nordic skiers, the rustic Tamarack Lodge & Resort at Twin Lakes offers trailside access to 19 miles of cross-country and snowshoe terrain. The upmarket and modern 210-suite Westin Monache threw open its doors a few years ago, steps from the Village. 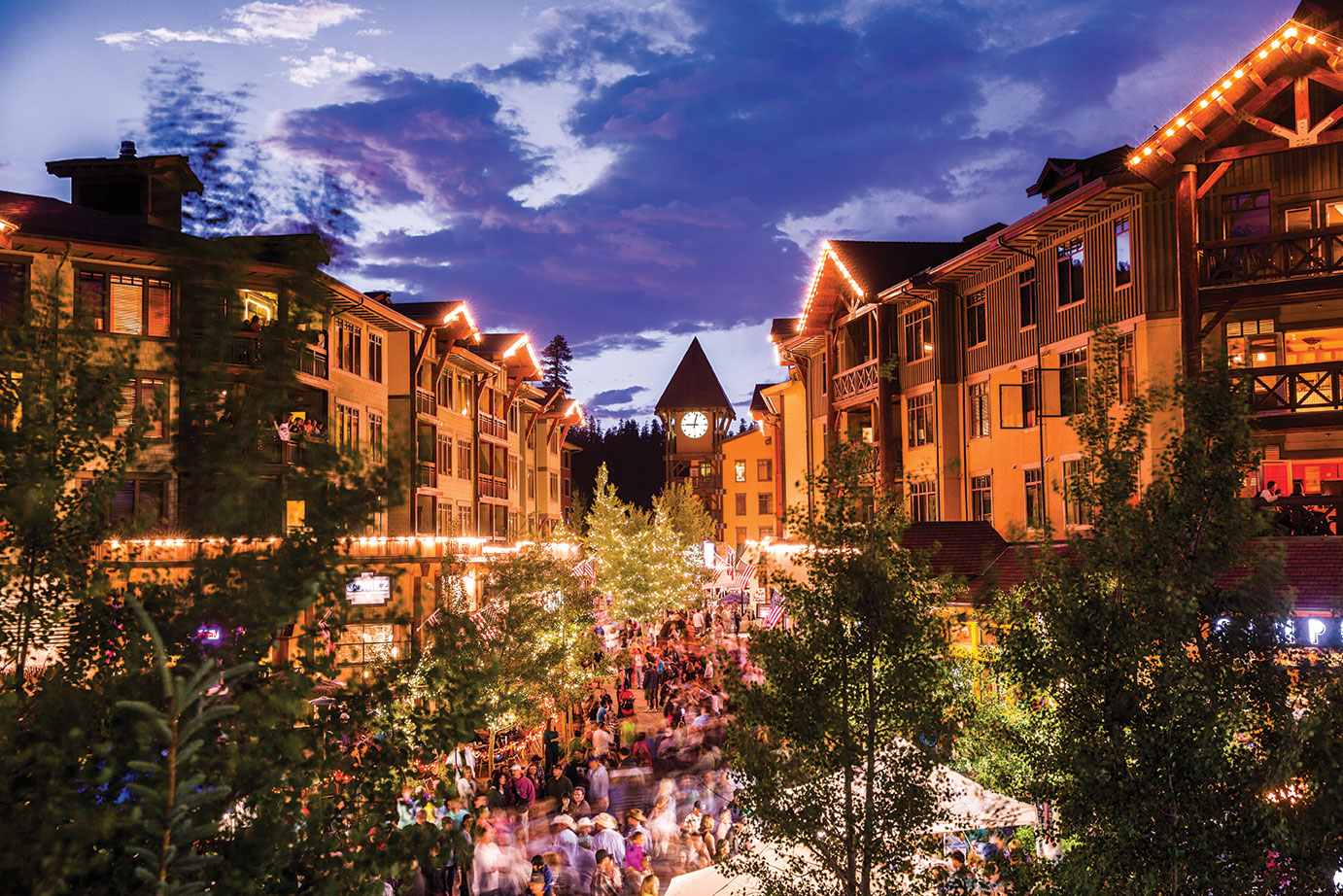 The mountain terrain falls into 15 percent expert, 20 percent advanced, 40 percent intermediate and 25 percent beginner. Several runs start high above the tree line, with open bowls aplenty. The Panorama Gondola to the summit—accessible to non-skiers as well—tops out at the small but big-windowed Eleven53 café and interpretive center, all with awesome vistas over the snowy spine of the Sierra, including Yosemite National Park and beyond.

A total of eight Unbound terrain parks are placed throughout the resort, training grounds for Olympic athletes and venue for the annual Freeski and Snowboard Grand Prix. Mammoth Mountain bills itself as the only resort in North America to offer three different-sized halfpipes; it boasts one of the world’s few 22-foot pipes as well as a mini pipe.

To speed riders back up the hill, nearly all the old, slow, double chairlifts have been replaced with high-speed quads and six-seaters as well as RFID gates.

Snowcat tours can transport 12 to 14 passengers in a heated cab to Minaret Summit on midday or aprés outings. A charcuterie board, fruit, cheese and wine are available for the adults, and a waffle sundae hot cocoa for the kids.

Tamarack Full Moon tours run every full moon (and the night before and after). The two-hour naturalist-led outings explore the moonlit wilderness around Mammoth Lakes on cross-country skis or snowshoes and finish with drinks and s’mores around the iconic fireplace at the Tamarack Lodge.

Just a couple of new events that are fun to watch or join include the Holy Bowly, featuring snowboarders getting creative on hand-shaped bowls, berms and transitions, and the Ezakimak (kamikaze spelled backwards) Challenge, a 5-kilometer, 2,000-foot uphill to Mammoth’s 11,053-foot summit on cross-country skis, snowshoes, foot or fat bike. 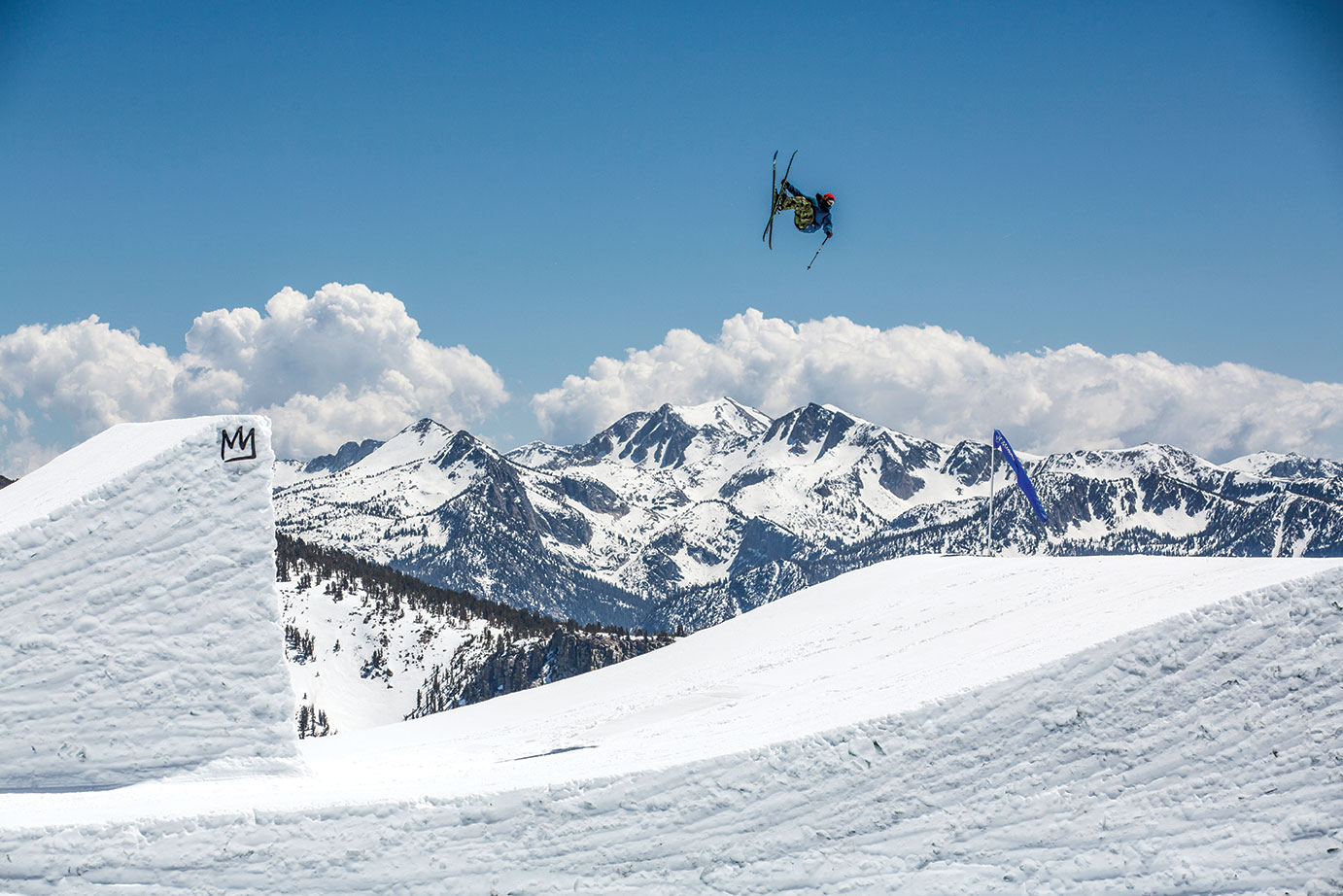 Mammoth has stepped up its dining options both on the mountain, at its base areas and in town.

A breakfast, lunch and dinner spot, 53 Kitchen & Cocktails, also in the Village, knocks it out with a modern interior and New American menu and clever—and often jalapeño-infused—cocktails. Happy hour and live music make this a go-to aprés spot.

Mammoth Brewing Company launched a new location with a brewery, tasting room and outdoor beer garden. The Eatery serves food that pairs well with the brews, like house-made chili pork rinds and a goat cheese and local peach flatbread pizza.

Restaurant Skadi is a fine-dining spot tucked into a warehouse with an open kitchen and just six tables and four counter seats. Named for the Viking goddess of skiing and hunting, this is Ian Algeroen’s second go at the eatery, which he closed in 2012 after a 17-year run. There’s a Tahoe connection here, too: Algeroen, the chef-owner, was one of Jack Rabbit Moon chef Amy Simpson’s instructors at the California Culinary Academy.

Mammoth Tavern, which took over Skadi’s original space, is also on its second iteration, boasting big-mountain views and a gastropub menu to match with bites like braised short rib grilled cheese.

Whitebark inside the Westin Monache serves food and drinks all day with a lengthy happy hour menu, including blistered shishito peppers with sesame lemon chili sauce and Kobe beef sliders.

If you can look beyond the fact that Mammoth Rock Brasserie is located above a bowling alley, a menu with authentic French items like escargot, onion soup, and lamb with red wine and wild mushroom reduction are all served up with a mouthwatering view of Mammoth Mountain. 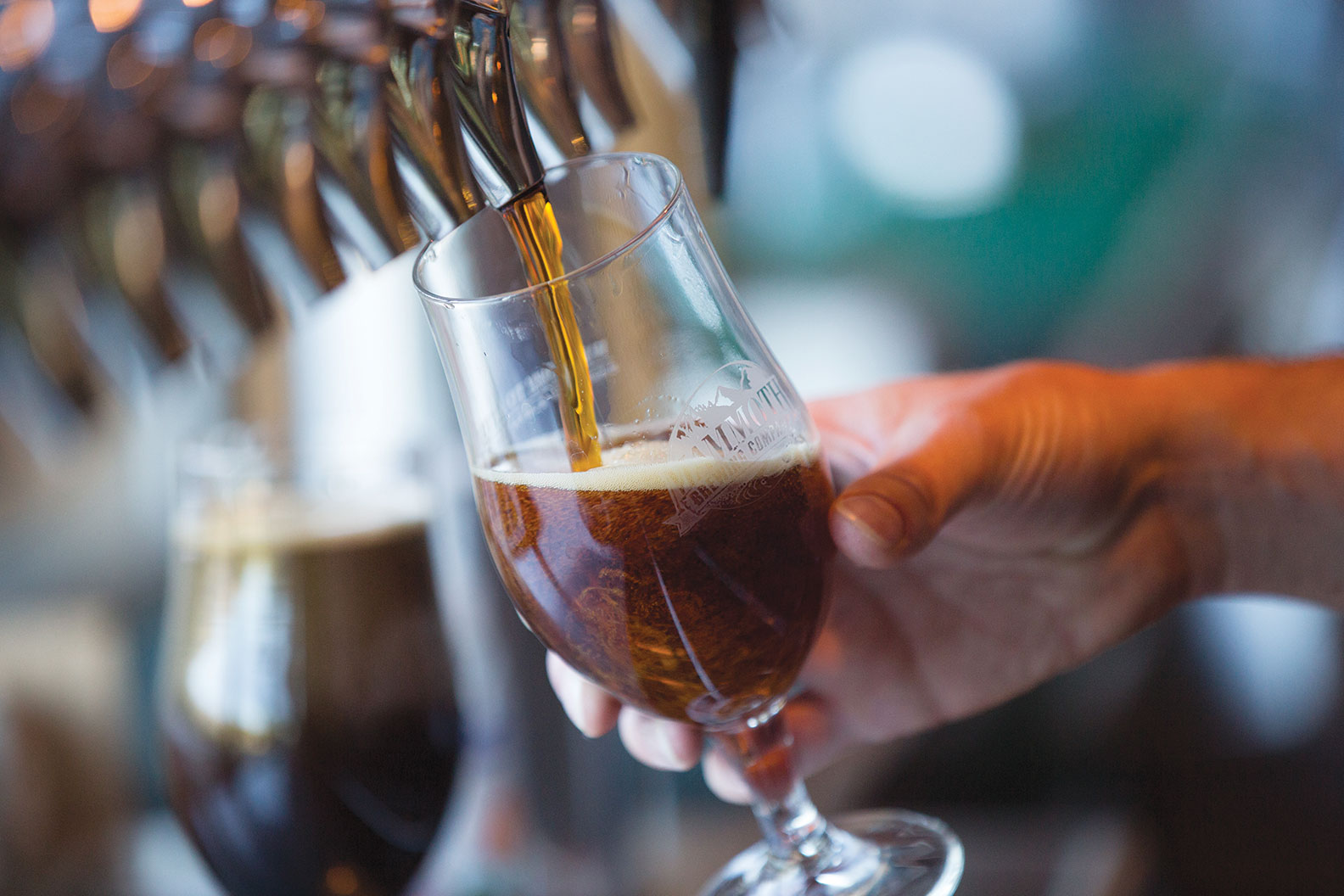 For more information, including ticketing options, click here. Tour the mountain from your computer! Check out Xplorit’s virtual tour of Mammoth here.

Writer Susan D. Rock confesses that the stunning snow-capped mountain views from Mammoth’s summit caused her to Julie Andrews twirl and sing “The Hills Are Alive with the Sound of Music.