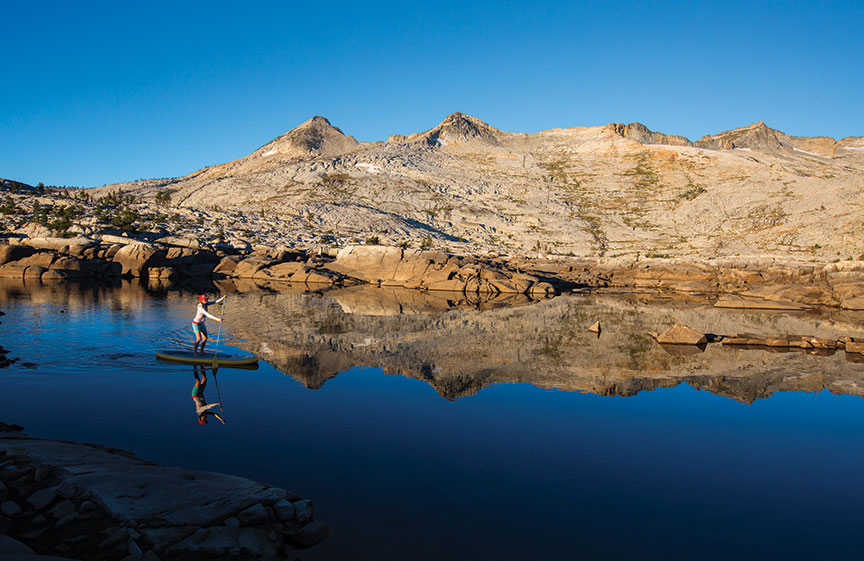 Desolation Wilderness: Of Rock and Water

Using the melodic music pumping from the car stereo to get into a rhythm, we inflated our brand-new Naish paddleboards. A cobalt sky dotted with a few lonely clouds opened northward, framed by the granite extending into Desolation Wilderness. The breeze was gentle and our decision was easy: Why walk around the Echo Lakes (Upper and Lower) when we could paddle across?

Desolation Wilderness is a backpacker’s wonderland. With more than 20 alpine lakes and numerous peaks, it’s Lake Tahoe’s finest backcountry destination. Extensive swaths of granite and more than a dozen trails crisscrossing its 63,000 acres make it a playground to explore over a lifetime. Nestled in the heart of this backcountry is a shallow reservoir called Lake Aloha. It’s hard to plan a trip into Desolation without visiting Aloha.

As the temperatures soar and the Tahoe Basin fills with tourists, many with even the smallest sense of adventure start to seek safe havens away from the crowds. Our plan was to paddle our inflatable SUPs to and on Lake Aloha—a relatively new option given inflatable SUP technology has only recently been on the market. Gathering a team of four Tahoe locals—Lauren Bobowski, Chris Clark, Dave Smoyer and myself—we loaded the car and headed down to Echo Summit, where we began our journey.

The mechanics of packing for a backpacking trip with paddleboards was relatively complex, but the idea was simple. It involved a series of inflations and deflations of the boards, paddling as far as the water levels would let us, and figuring out how to efficiently carry the weight in our packs when necessary. When not paddling, we would proceed on foot with 30-pound boards rolled up along with a selection of camping gear and food on our backs.

On a glassy August morning, after securing our gear in dry bags and connecting the bags to our boards, we paddled across Lower Echo Lake. Passing by a series of summer cabins and beautiful Sierra scenery, we moved onward toward the north side of the lake. On a good water year, a narrow waterway connects Upper and Lower Echo. We scouted the channel and discovered just enough water to glide through the connection. 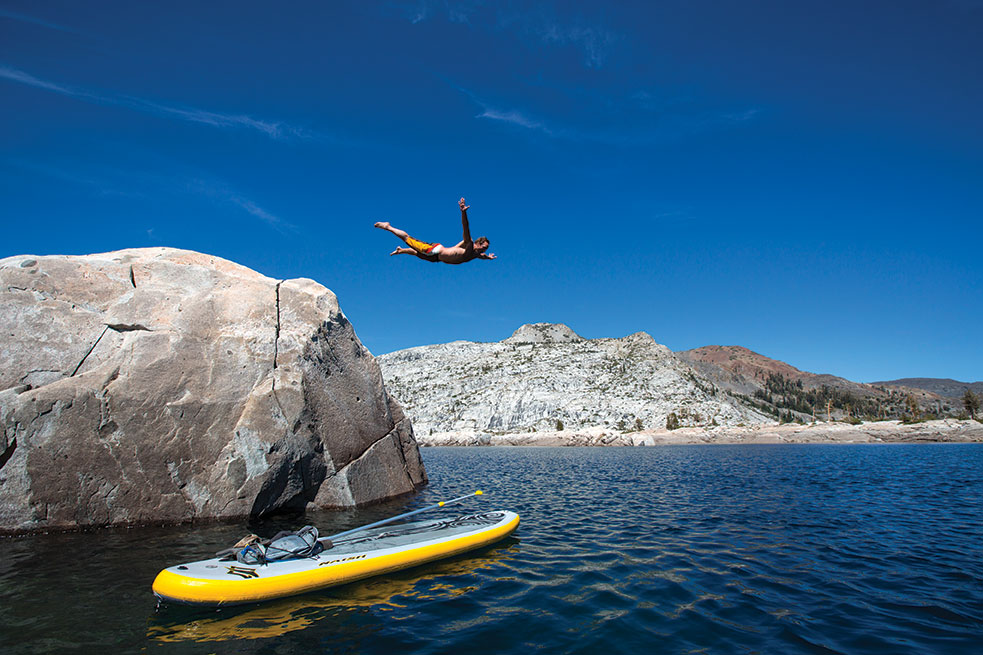 Emerging from the channel, the views from Upper Echo Lake exploded across our periphery. Reflections of the mountains extended in all directions on glassy, clear waters. There were no other sounds except the singing of the birds. Here began the perfect long-distance rhythm of look up, look down, look right, look left, paddle, smile, repeat.

Slowed by numerous sightseeing stops, it took an hour and a half to reach our take-out zone on Upper Echo’s north side. We came to a dock where we could see the Desolation Wilderness boundary sign. We felt a sense of accomplishment after finishing our paddle across a stellar section of water and were about to find out how tough we really were. We deflated our paddleboards, stuffed them in giant canvas bags and hoisted them onto our shoulders. With the weight bearing down, it was hard to imagine that we were about to carry all this gear some four-and-a-half miles to our next destination.

The trail was slow and steady. We stopped frequently in order to remove our bags and stretch our tired bodies. The paddles sticking out of the tops of our bags would occasionally hook a tree branch, delaying us longer as we wrangled ourselves free.

After a couple hours, we glimpsed Aloha. Depleted banks reminded us it was a drought year, and we wondered if it would even be possible to paddle across. What I had known as a huge lake basin with a scattering of islands was more like a series of channels with large granite landmasses in between. From our low vantage point we were forced to make a call—continue walking along the shore or inflate and see how far we could go. At that point, the collective feeling was that paddling the boards was much easier than carrying them.

After inflating the boards we cheered and hollered as we set off, one by one, onto Aloha. We were fired up. Our hope was to find a camping destination that was secluded, flat and only accessible by SUP; we didn’t want to share our experience. The water was shallow and it didn’t take long to realize we were paddling through a maze. Seemingly walled in by low-lying granite, we split our time doing reconnaissance both on boards and on land in order to find passageways. This part of the adventure was exactly why we decided to come here in the first place.

The day ran into dusk as we slowly but surely progressed deeper into the Aloha basin. The lake had transformed into a series of small passageways that sometimes required a portage—carrying our boards over land, at one point about a quarter mile—which we did in shifts.

As the sun dipped behind Pyramid Peak’s towering pinnacle, we came upon the biggest channel yet. We had reached the main section of Aloha. For the first time, we could no longer see the lake’s bottom. With darkness approaching, we found a camp spot consisting of smooth granite, easy access to water and a nearby cliff jumping spot.

With flat ground a rare commodity, tent sleeping was tricky and something we ultimately abandoned. A better solution was to sleep under the stars directly atop a partially deflated board. There were no clouds, the weather forecast was clear and mosquito season had recently ended. With the Crystal Range looming above us and stars shooting across the sky, we slept this way for the remainder of the trip.

The next two days were a mixture of paddling, exploring and swimming in Aloha. There was a true sense of isolation as we located the main section of water remaining in the reservoir. Our goal was to paddle as far as the lake let us. We were pleasantly surprised with the way the channels opened up one after another, allowing us to paddle to the northern end of the lake.

During our paddle back to the trailhead, through those crystal-clear mountain waters and onto the path back to Echo Lakes, we were all smiles. The weight on our shoulders was nonexistent as all we could talk about was where to go next. 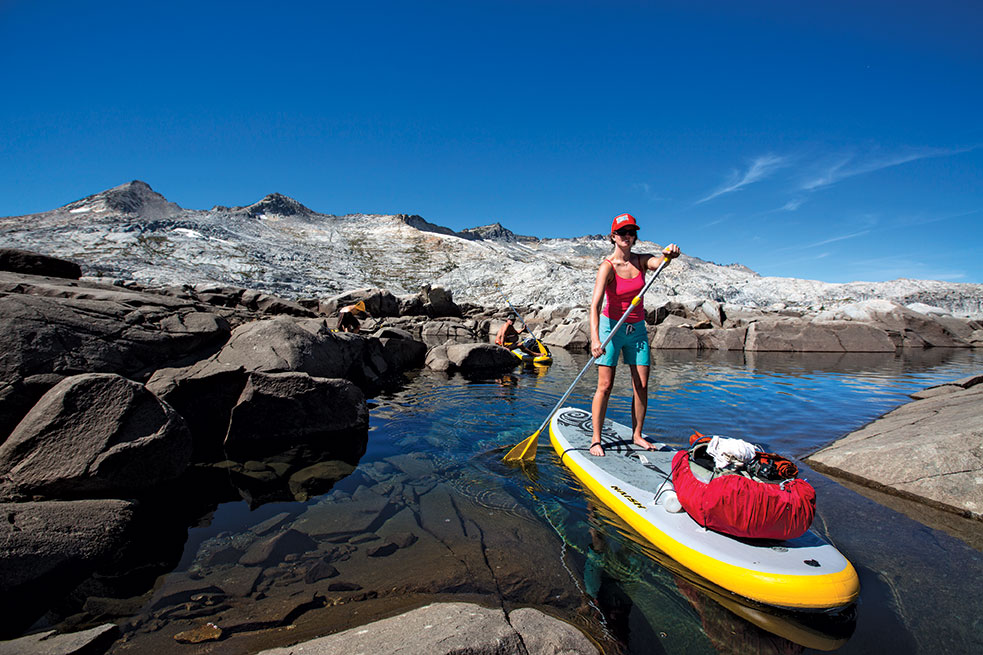 Ryan Salm is a Tahoe City–based photographer and writer. Find more of his work here