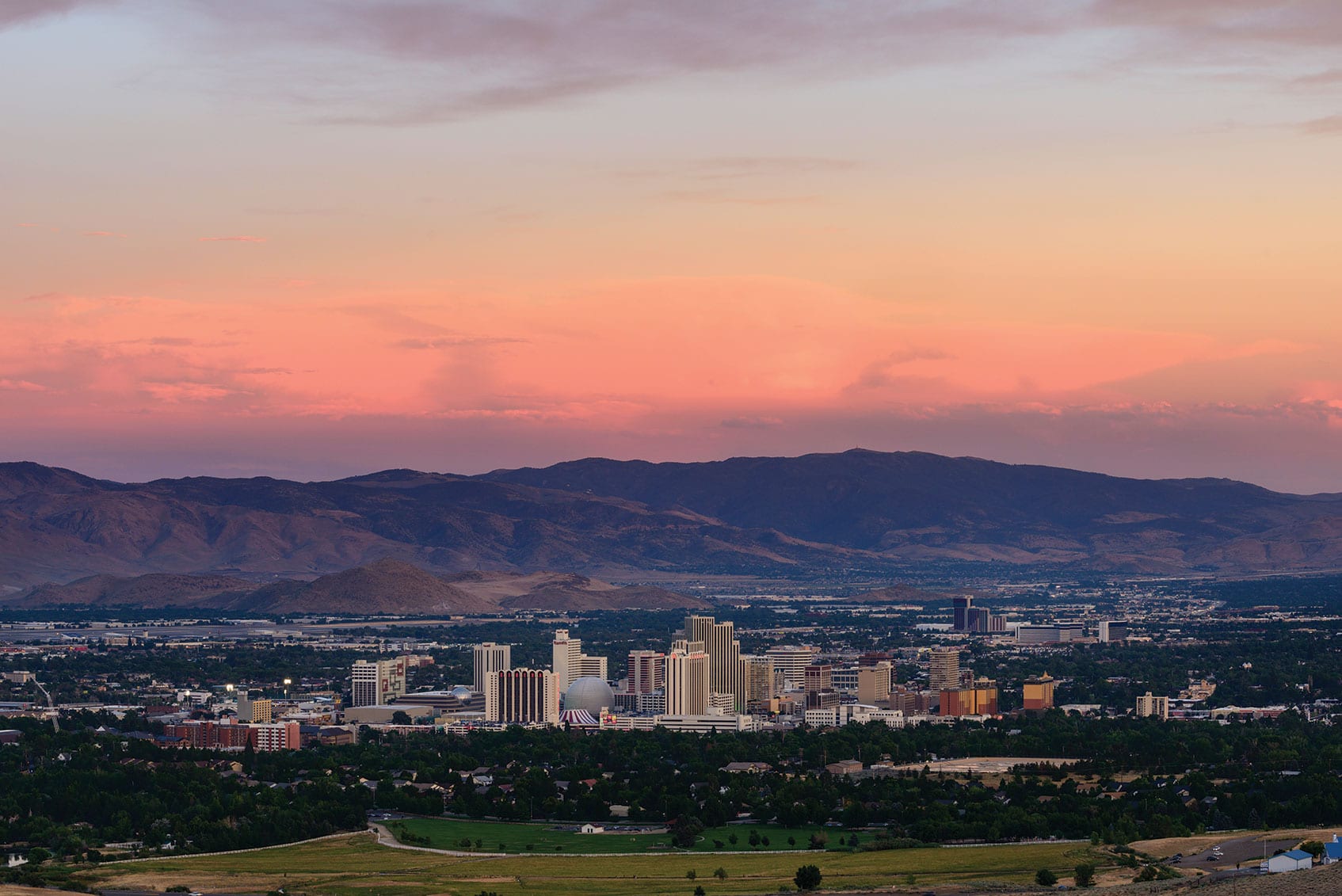 National headlines may trace Reno’s current winning hand in job growth—the straight flush that has some calling the city and its outlying area “Silicon Valley east”—to the September 2014 announcement that carmaker Tesla had come to town, but business leaders will tell you they drew the first four cards of that hand just a little earlier.

Indeed, the most significant decrease in the region’s unemployment rate over the last 10 years—it peaked at 13.9 percent in January 2011, during the Recession—came in 2013, when joblessness decreased from 11.2 percent to 8.1 percent over the year, according to the U.S. Bureau of Labor Statistics. While Northern Nevada still hadn’t matched the overall national recovery—unemployment numbers in the U.S. were at 6.7 percent in December 2013—it had outpaced the nation for job growth that year.

With the unemployment rate down to 4 percent by June 2017, the chips continue to stack from that gamble. Tesla, of course, was the big win.

The electric carmaker built its giant gigafactory—the nearly 2,000,000-square-foot manufacturing space where workers build battery packs for its cars and home units—at the Tahoe Reno Industrial Center (TRIC) in nearby Storey County, about a 25-minute drive east from downtown Reno. The industrial park, once better known as a home to fulfillment centers for the likes of Amazon and Wal-Mart, attracted the Las Vegas–based data center Switch, which opened its first 1,000,000 square feet of data management space for online bidding house eBay this past February.

The two tech giants alone should account for 11,000 full-time workers and eventually up to $12 billion in payroll, says Lance Gilman, a principal and director of marketing for TRIC. More companies are on the way, too, as TRIC announced in April that Google bought 1,200 acres of land for more than $29.1 million.

“I’ve been in the real estate development game for 40 years,” says Gilman. “The first thing you want in any development is an anchor tenant to attract more companies. We had over 150 companies here before Tesla came, but [Tesla], you could say, was our anchor. Once they came, Google and Switch headed here, not because they are affiliated with Tesla in any way, but because we’ve got a reputation now.”

Though most of the eye-catching development is coming at TRIC and nearby Reno Technology Park—where Apple will invest $1 billion to build a data center, its director of state and local affairs, Mike Foulkes, told reporters in May—most of the jobs are coming in Reno proper, Kazmierski says.

“Most of our growth isn’t related to Tesla. It’s coming in the form of small companies moving into downtown and the light industrial areas here. But having the industrial centers out there [in Storey County] is a tremendous advantage to have for companies that need that kind of space,” he says.

One advantage Reno does not have, however, is available housing.

While new apartments are coming online, need is still outstripping availability, as Gilman estimates “we’ll need something in the neighborhood of 50,000 new units over the next few years. The good thing is, though, that Switch and Tesla and Google aren’t hiring everybody tomorrow. We’ve got some time.”

Just as the genesis of the jobs boom began at a period of high unemployment, the housing crunch began at a period of high vacancies and plentiful housing. New projects, such as subdivisions and workforce housing, largely weren’t planned during the Recession. Now that developers are ready with cash, governments—from the City of Reno to Carson City and Storey County—are slow to catch up, Gilman and Kazmierski agree.

“Our local governments weren’t funded and staffed for growth coming out of the Recession,” says Kazmierski. “We’ve been banging the drum on this for two years now… we’ve been trying to accelerate some of the developments. But the crunch is here now. We’re at almost zero vacancy.”

Both are confident, though, that help is on the way. Nine apartment projects of more than 80 units in size are currently being constructed in the region, which will add 2,713 units to the slim existing inventory, the Johnson Perkins Griffin report shows. Twenty more have either been approved or are in the planning phase, which could add another 7,358 units.

“Housing hasn’t abated interest from employers looking to relocate to the region,” Kazmierski says. “This is a place that will invest in housing. The opportunities are there.”

Nobody quite knows what’s next for Northern Nevada, but for the present, recruiters are going all in on the hot hand.

Kyle Magin is a San Diego-based writer and editor. A former Tahoe Quarterly editor, Magin has traded in his snowboard for a surfboard.

The average price of a Reno rental unit has skyrocketed since the Recession, climbing by 33.5 percent for 17 consecutive quarters from $830 in the first quarter of 2013 to $1,111 in the first quarter of 2017, the most recent for which figures are available. Much of the growth has come in the last two years alone as new employers from Tesla to Apple have set up shop in the Biggest Little City.