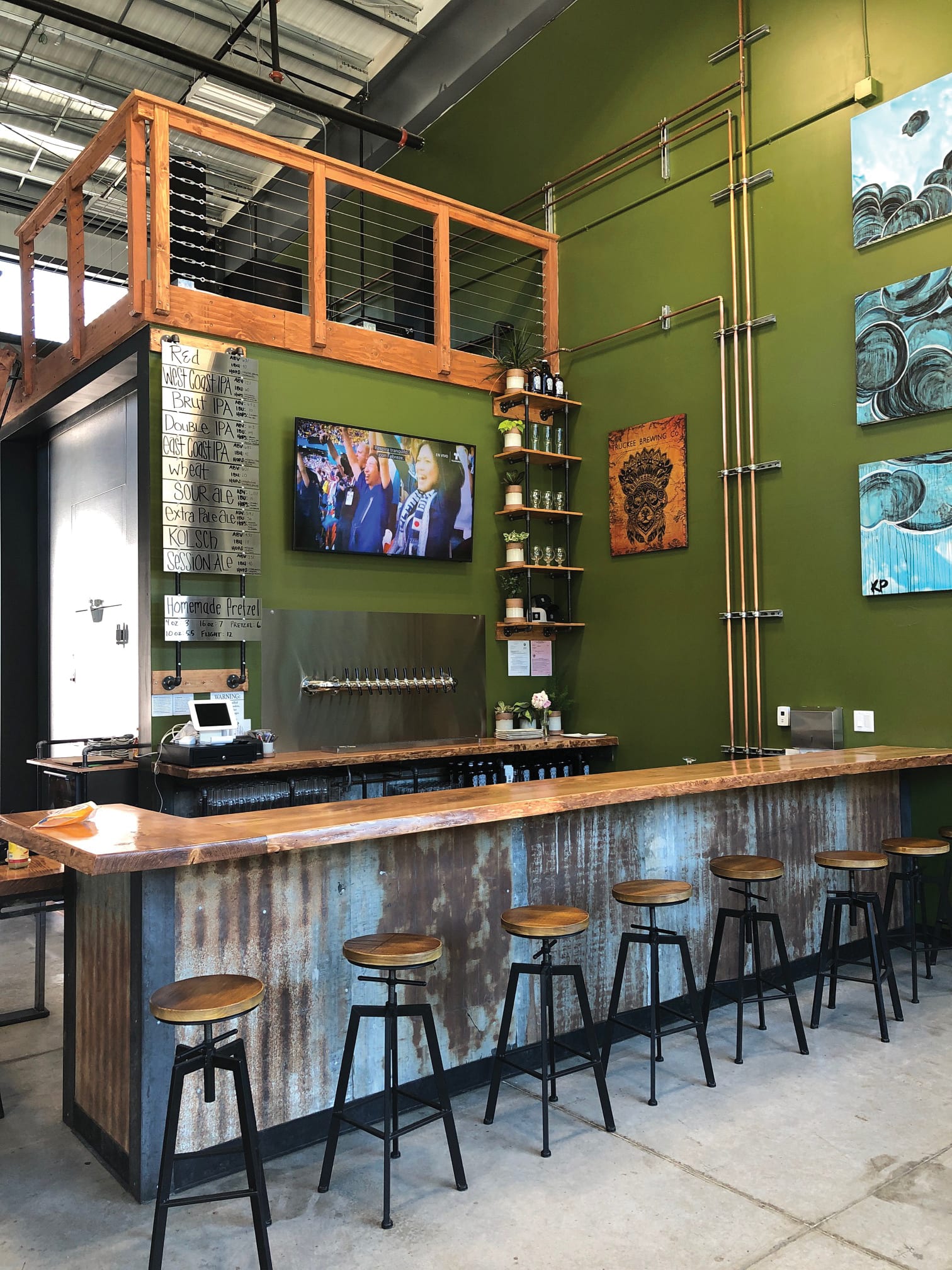 This longtime Kings Beach staple moved down the street to a completely renovated space that formerly housed various versions of Peluso’s Apizza. Their familiar lineup of regular and thin crust pizzas and calzones are on the menu along with pesto strips, steamed clams with garlic bread and oven-baked sandwiches, including the signature hoagie piled with smoked ham, Canadian bacon, Italian salami and provolone. The streetside patio is open in warmer months. L, D; $11.95–$32.95

Located in the former Sash and Door cabinetry shop, this spot sells charcuterie boards that can be upsized with sous-vide tri-tip and chicken served with sauces such as chimichurri, chipotle honey barbecue, spicy Peruvian green and Romesco. They also serve salads, grain bowls and hot pressed sandwiches such as the Cuban with pork, shaved Liberty Food & Wine Exchange ham, stone ground mustard, spicy pickles and gruyere. Pair with one of the many off-the-beaten path wines by the glass or one of the dozen local beers on tap. L, D; $13–$28

This spot specializing in Czech and German fare recently relocated from Placerville. Proprietor Richard Zellner, who is of Czech heritage, and his wife Lenka, a Prague native, cook up hearty Eastern European specialties such as potato pancakes with sausage, sauerkraut and gravy, chicken and pork schnitzel, goulash, chicken paprikash, roasted pork with dumplings, beef stroganoff with spaetzle and, of course, apple strudel with cinnamon and raisins. B, L, D; $16.95–$29.95

The folks who launched Pick 6 Sports Lounge opened this rustic modern cafe next door. Coffee drinks feature a custom blend from McLaughlin Coffee Company in Berkeley, and there are Mighty Leaf teas and vegan smoothies as well. For food, look for acai bowls, egg-cheese-bacon waffles, avocado toast, fruit salads, and a turkey and Swiss with pesto aioli. Lounge beneath the fun mountain-bear-lake mural; the cafe has USB ports and rooftop and garden seating for those who want to linger longer. B, L; $7–$12

Nate Riffle and Jerry Seagreaves launched this spot on four acres of land along the Upper Truckee that was formerly home to the Tahoe Amusement Park. The industrial mod space where the glass window-walls blend indoors and out offers a wide range of 30 craft beers on tap. Dog and kid friendly, there’s a picnic area, patio, fire pits, lawn games and a fenced-in pooch park in the works. There’s no meal service but look for the occasional food truck like Butcher’s Kitchen from Placerville.

Brett Rosselli opened this sleek dining space and retail wine shop in the former Skyline Market across the street from La Vecchia. The offerings here include a long list of shareable plates, many familiar from Sierra St. Kitchen & Cocktails, which Roselli also owns. They include flank skewers marinated in soy, cumin, cilantro and pepper, as well as prime filet medallions, lamb chops veal demi and mushroom risotto. Naturally, there’s an interesting wine list, along with clever cocktails and over a dozen beers on tap. D; $7.75–$16

Owned by a group of locals deeply into dough, this pizza counter in the West Street Market produces chewy, charred, Neapolitan-style pies in 90 seconds in a 900-degree Italian blue-tiled wood-fired oven. The crust, made with 00 flour and sourdough starter, gets topped with regionally sourced ingredients, whose provenance is listed on a chalkboard. Try one with oyster mushrooms, truffled goat cheese, fontina, caramelized onion and thyme. L, D; $14–$17

This counter-service spot next to the theater in the Summit is the second location for the popular Korean restaurant from UNR alum Jay Ryu, who also owns similar spots in Seoul. A Korean cuisine mainstay, here bibimbab is served in a bowl layered with rice, veggies, raw or cooked egg and sliced chicken, beef, pork or tofu. Also on the menu: Korean-style wings and japchae, a glass noodle stir fry. Look for the next cafe to open soon in Sparks. L, D; $5.99–$11.99

Ivan and Sadie Fontana, owners of Midtown Eats and Death & Taxes, who dabbled a bit in tacos at their former South Virginia Street space, have set up a tiny taco stand with pretty pink doors in a renovated garage behind their establishments on Cheney Street. Taco types include brisket, chicken, fish, carnitas and even cheeseburger. There’s also a veggie version with fried cauliflower along with guacamole, chips and Jarritos soda. L, D; $6–$8

In the Saint Mary’s center in Northwest Reno, the second location for this cheery, family-run, south-of-the-border eatery (the first is in Sparks) serves the same Tex Mex menu—burritos, enchiladas, tamales, carne asada, tacos and mole. Breakfast, from huevos rancheros to chilaquiles, is served with rice and beans and available all day. B, L, D; $3.50–$9.50

Replacing the West Street Wine Bar, this sipping spot and retail shop is owned by Serge Johal, proprietor of neighboring Thali restaurant. Find here an ever-changing list of over 40 wines by the glass from around the world that appeal to novice and cork dork alike. Pourings can be paired with foods from the surrounding West Street Market eateries, and there’s wine tasting events to let you try before you buy.