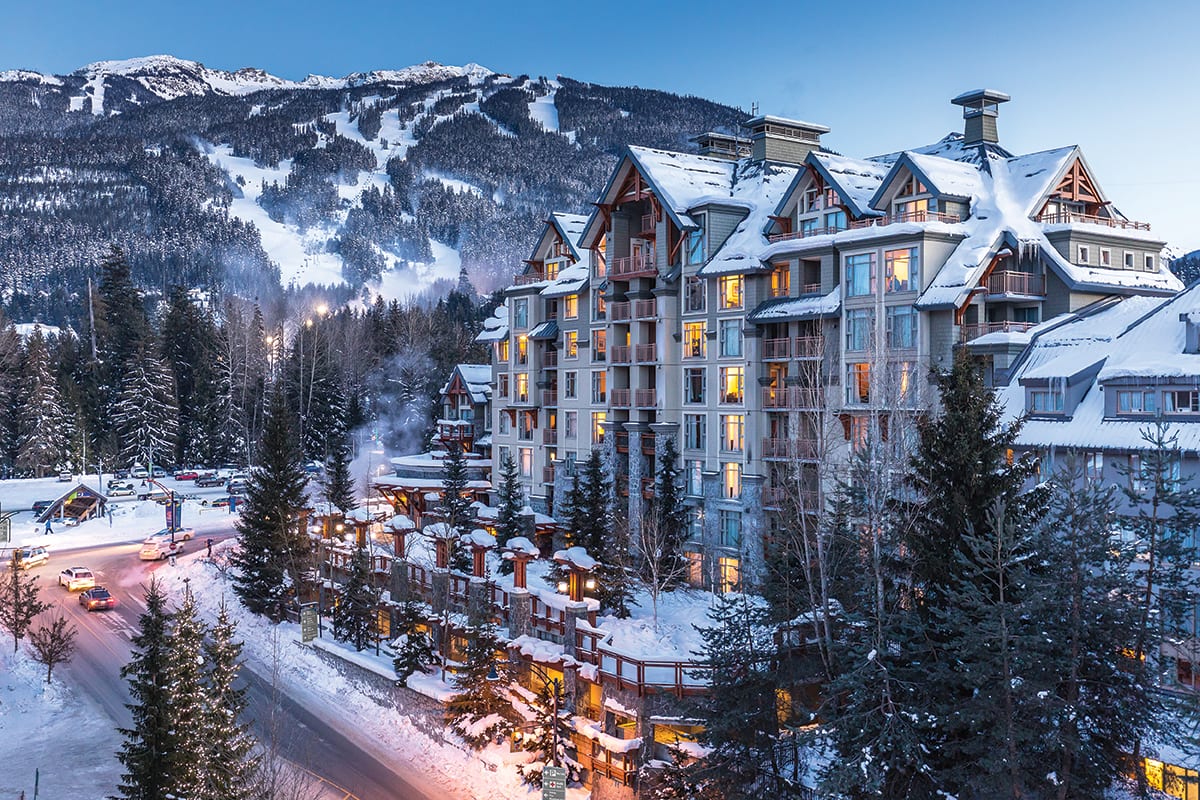 Whistler Village offers accommodations of every sort, many with mountain views, photo by Brad Kasselman

The Wild and Wonderful World of Whistler Blackcomb 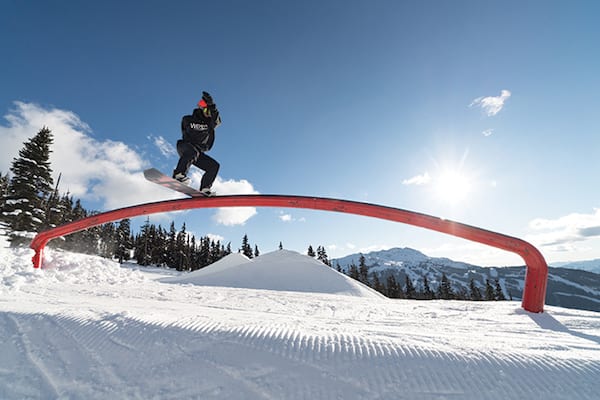 By the numbers, North America’s largest ski resort set in the spectacular Pacific Coast Range boasts 8,171 acres of inbound slopes spread over two massive mountains, with 200-plus marked trails, some three dozen lifts, a mile of vertical (including a pair of 7-mile top-to-bottom runs), European-style high alpine terrain with 16 bowls and three glaciers, plus numerous cliffs, crags and chutes, and eight world-class terrain parks, including a 22-foot superpipe.

The resort gets an average of 40 feet of snowfall each season supplemented by 700 acres of snowmaking. Off-piste opportunities abound—snowcat skiing and its on-site heli-skiing operation provides access to an additional 430,000 acres.

Whistler, which opened in 1966, and Blackcomb in 1980, merged under the Intrawest umbrella in 1998, creating the dual mountain destination. Vail purchased the resort in 2016 for $1.1 billion, spending another $52 million on capital upgrades focused on three new lifts. Epic passholders now get unlimited, unrestricted access to the resort; Tahoe skiers and riders with an Epic Local Pass can buy discounted tickets in advance. 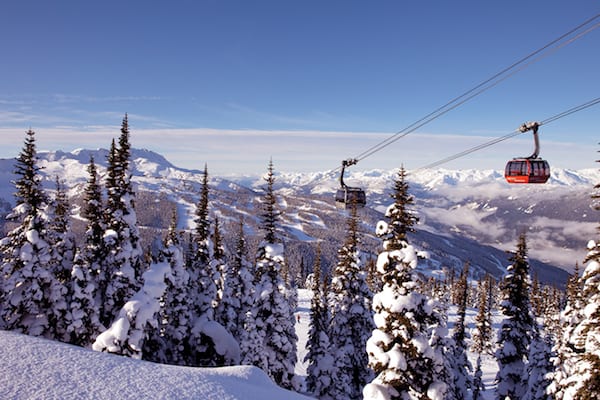 Connecting its adjacent mountains, Whistler Blackcomb’s Peak 2 Peak gondola is the highest lift of its kind, three times the length of the Golden Gate Bridge and the world’s longest unsupported span at 1.88 miles when it opened in 2008. Traveling at nearly 17 miles per hour, it can transport 2,050 people per hour each way. The new 10-passenger Blackcomb gondola, which links the Peak 2 Peak and Village gondolas, completes the longest circuitous lift system in the world.

Two of the Peak 2 Peak gondolas sport a vertigo-inducing glass floor. Fittingly, Shane McConkey, who grew up skiing these mountains with his freeskier father Jim, christened the Peak lift by BASE jumping from one of its cabins.

Both mountains boast a wide variety of terrain to suit any skier or rider, with 55 percent on both marked as blue runs, including glaciers, bowls and glades that are rarely accessible to less advanced skiers and riders. 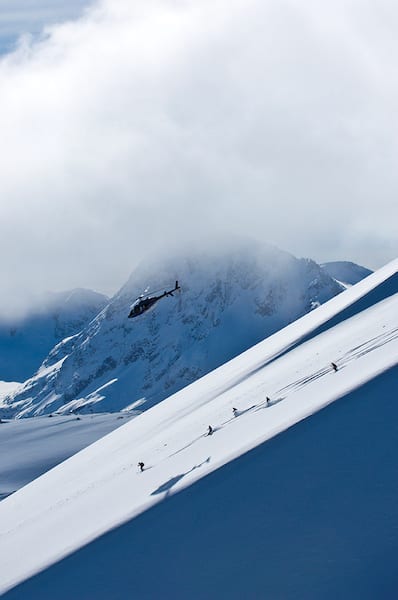 Whistler Heli-Skiing’s terrain includes 173 glaciers and 475 runs in an area 50 times the size of Whistler Blackcomb, photo by Eric Berger

Locals advise exploring one mountain at a time, following the sun throughout the day. And for the perfect photo op summing up the area’s splendor, head for Top of the World Summit atop Whistler Mountain.

From that vista point, snow-covered peaks stretch in every direction; interpretive signs help identify geological history and the various terrain features like the iconic Black Tusk, an ancient volcanic plug rising from a blanket of white.

For a little extra exhilaration, a pair of new attractions at the Top of the World include the suspension-style Cloudraker Skybridge, which spans 425 feet from Whistler Peak to the West Ridge, crossing high above Whistler Bowl—and, for those who want to stick closer to terra firma, the cantilevered Raven’s Eye 360-degree viewing platform 36 feet from the cliff’s edge, above Whistler Bowl. Both are open year-round.

While locals have long flocked to Whistler Blackcomb, the rest of the world discovered the resort when it hosted events during the 2010 Winter Olympics. Skiers can take a run down the famed Dave Murray Downhill (named after the Canadian ski racer), which drops 3,300 vertical feet in a mile and a half. The Olympic rings still stand mid-mountain outside the Roundhouse Lodge, with an exhibit with highlights from the downhill and alpine events inside.

Another set of rings remain in Olympic Plaza in the heart of Whistler Village, the resort’s sprawling pedestrian-only buzzy hub, where skiers and riders can access both mountains by day and enjoy Euro-style après by night at the some 100 restaurants and bars, from the Ketel One Vodka Ice Room to Purebread’s insanely tasty and carb-loading baked goods. Creekside, the original, smaller, quieter village, lies 5 miles south; both are connected via shuttles and public transit. Another 70 spots to eat and drink are scattered around the greater Whistler area. 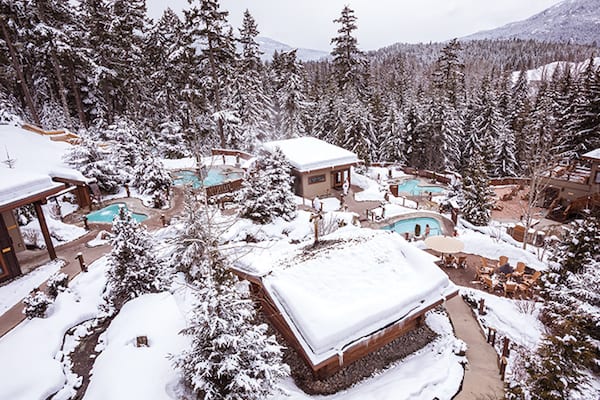 When hunger strikes on the mountain, 17 restaurants with a total of 6,540 seats can accommodate any craving. For full-service memorable meals served with a heaping helping of panoramic views, make a reservation at Steeps at Whistler’s Roundhouse Lodge or Christine’s on Blackcomb inside Rendezvous Lodge, for farm-to-table menus, regional wines and sunny patios if the planets align.

For something casual and cozy, Crystal Hut log cabin on Blackcomb’s Crystal Ridge is famous for all-day Belgian waffles and wood-oven-baked lunch specialties, plus evening fondue dinners via snowcat and snowmobile.

Garibaldi Lift Company, otherwise known as GLC, above the Whistler base gondola building boasts heated patios facing the mountains, a fireplace and a shareable menu featuring tacos, burgers and flatbreads. On Sunday evenings it’s a prime location to watch the free weekly Fire & Ice show featuring world-class athletes flipping and twisting through a ring of flames. It’s followed by fireworks, and all set to music. 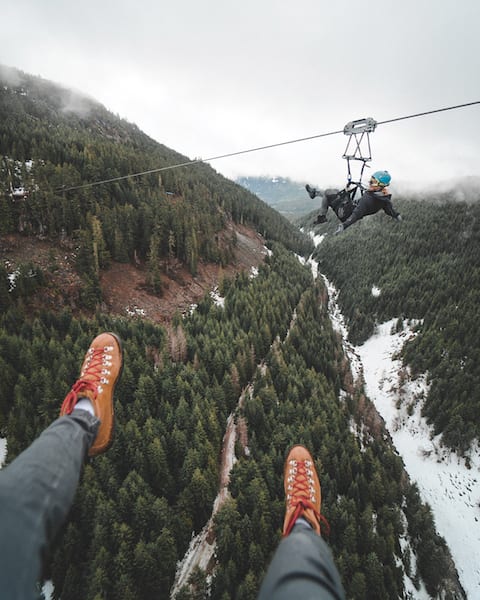 Other fun activities to consider include bobsleigh, luge and skeleton rides at the Whistler Sliding Centre, sleigh rides, ziplining, dog sledding, and snowmobile and snowcat tours. The Audain Art Museum showcases British Colombian and First Nations art in a stunning setting, and the Scandinave Spa with its hot tubs and massages set amidst the mountains and trees is sure to soothe sore muscles.

Shopping options cover galleries to gear, and lodging ranges from the Four Seasons and Fairmount to condos and rentals at every price point. It’s all wrapped up in that nice Canadian vibe, amplified by the high number of Australians who work around the resort. And, of course, the exchange rate makes everything that much nicer.

With Whistler Blackcomb’s list of fun alpine options, any way you add it up, the resort’s size, snow, scenery and après-ski total a totally epic outing. Lifts spin from November until April this year.